To consider a story about the Holocaust to be lovely appears grotesque and ironic. However, Diane Ackerman’s non-fiction work The Zookeeper’s Wife: A War Story, begs to differ. Ackerman presents the true story of compassion and its polar opposite very wisely, and in an manner that manages to be both grim and exuberant. The tale to be told set Ackerman up for greatness, and she executes its telling impeccably. The story begins in the summer of 1935 in Warsaw, Poland, where we are introduced to a young couple, Antonina and Jan Zabinski.

Get a verified writer to help you with Zookeeper’s Wife

Antonina and Jan were the directors of Warsaw’s lush, fecund zoo in which the animals not only inhabited cages, but in habitats (engineered by the couple) to recreate the animals’ natural habitats. Both Antonina and Jan’s backgrounds were far from the norm; Antonina being a Russian-born Pole whose parents were murdered by the Bolsheviks during the early stages of the Russian Revolution and Jan, born a Polish Catholic, but raised atheistically by his father in a working-class Jewish neighborhood.

It was these unique and differing foundations that made the Zabinski household almost a madcap bohemia, constantly hosting artists and intellectuals, and not to mention a seemingly never ending rotation of non-human companions, ranging anywhere from muskrats to lion cubs (all of whom had names). From this information, it is evident that Jan and Antonina Zabinski were far from interested in living their lives with customary boundaries.

This proven as Ackerman states, “Antonina and Jan had learned to live on seasonal time, not mere chronicity.

Their routine was never quite routine, made up as it was of compatible realities, one attuned to animals, the other to humans. ” And so their lives were imprinted “with small welcome moments of surprise. ” Consequently, their life together was ridden with “small, welcome moments of surprise. ” In 1939, Nazi forces bombarded Warsaw in such a meticulous brutality, that the city was nearly in ruins, unfortunately inclusive of the zoo.

Diane Ackerman consistently wrote in a way that was almost poetic at times, and her description of the aftermath was a passage I found to be exceptionally evocative, writing, “The sky broke open and whistling fire hurtled down, cages exploded, moats rained upward, iron bars squealed…. Wounded zebras ran, ribboned with blood, terrified howler monkeys and orangutans dashed caterwauling into the trees and bushes, snakes slithered loose, and crocodiles pushed onto their toes and trotted at speed…. Two giraffes lay dead on the ground, legs twisted, shockingly horizontal….

The monkeys and birds, screeching infernally, created an otherworldly chorus…. The tumult surely sounded like ten thousand Furies scratching up from hell to unhinge the world. ” With this tragedy comes the commencement of the Zabinski’s real story, starting with Jan’s immediate joining of the resistance. He contributed to the rebel cause by smuggling what spare food existed into Warsaw’s Jewish ghetto, teaching biology to escaped Jews and other members of the resistance at an underground university, and even using the more than partially destroyed zoo as a cache for arms.

Not until after the war was it discovered by Antonina that in addition to this that Jan had engineered bombs, sabotaged trains carrying German military personnel, and sending to the German troops intentionally poisoned pork. In an effort much different, but undoubtedly just as important as Jan’s efforts in the underground, Antonina and Jan opened their glass villa and the rest of the zoo to Jews (both smuggled from the ghetto and those never sent) and partisans.

The “Guests”, some of whom Jan personally rescued from the ghetto, were hidden by the Zabinskis in any and every available, yet easily-concealed area on the property (closets, spare room, old animal cages, etc). Over the course of the Nazi occupation of Warsaw, the Zabinski residence held refuge to nearly three hundred of these “Guests”. Though risking the exposure, torture, and execution of herself, Jan, and their son, Rys, Antonina was determined to keep the household as lively and filled with music as possible during this period’s entirety, as a way to keep hope and normalcy.

As bizarre and dissonant as the actions of the Zabinskis sometimes were, they were more than accounted for. Jan Zabinski was a courageous, yet collected taker of risks, whose upbringing connected him closely to many Jews. Antonina Zabinski is seemingly the opposite of her husband, made tense and paranoid by what was happening around them (though she had good reason to have been so, after learning about political violence the hard way from the Bolsheviks).

However, Ackerman speculates that Antonina inability to turn a blind eye to the suffering around her stemmed from her connection to animals and their ingdom- her belief in every living thing being entitled to its own life, nurture, and respect. She concludes from this idea that the obsession with hierarchy, uniformity, and classification of the Nazi regime was virtually incomprehensible to Antonina, and those like her, who take the chaotic moments and shear diversity of life in strife. A story such as that of the Zabinskis could so simply be misconstrued into Disney-equse innocence and humor. Luckily, Diane Ackerman dodged that bumpy road by doing two things.

First, by effortlessly, though ever-so carefully, drizzling the horrors and darkness of the Holocaust into nearly every page (which is precisely how it should be, given this is a war story). For instance, although the Zabinskis determinedly conserved a sense of ‘joie de vivre’ in their home, we readers are all too reminded that the “Guests” , before belonging to that title, were bright and successful, and not the prey in a hunt they now were. In her diary, Antonina referred to them as “shipwrecked souls”.

As important as her leaving poignant reminders of the darkness enveloping the world at the time, Diane Ackerman’s undying refusal to romanticize nature helped to ensure the hard blows of The Zookeeper’s Wife: A War Story would not be lost amongst amusing anecdotes of the Zabinskis non-human family members nor the comparisons and parallels between wildlife and war. Her understanding of the deceptive and violent side of the animal world allows her to get across that the shadows of the regular world cannot be escaped by being immersed in the natural world, which brings her to Lutz Heck.

Director of the Berlin zoo at the time, Lutz Heck was a considerably distinguished and experienced zoologist , though he would become the nemesis of the Zabinski family. Betwixt the Nazi occupation of Warsaw, Heck promised to Antonina and Jan that the battered remains of the zoo were to be protected and preserved. This promise was eventually broken during a drunken rampage with his SS buddies that lead them to murder the defenseless creatures for sport. Surprisingly, Lutz Heck was an animal enthusiast, much like Antonina and Jan, though his adoration was rather peculiar.

Quite fitting to Nazi ideals, Heck, supported by Hermann Goring, set to recreate pureblood species of certain animals, many of which were presumably extinct, such as tarpans (ancient horses) and auochsen (ancient cattle). He did so while ridding of others deemed ‘racially degenerate’ by the Nazis. Lutz Heck’s aspiration was to, as stated by Ackerman, “do nothing less than recasting Germany’s natural world, cleansing it, polishing it, perfecting it. ” In short, the Nazi system for ‘purifying’ wildlife was no different than that of ‘purifying’ the human race.

From this, Ackerman posits that Heck may have perceived genocide as “hygienic and inevitable” after years he spent observing the predatory nature of animals, but she is swift to point out that it is exactly here where humans differ from animals, writing “What’s instinctive isn’t inevitable,” and “we don’t always play by nature’s rules. ” Ackerman implies that at the root of the Nazis’ recklessness, lies a paradox- on one hand, the refusal to control basic amoral impulse and on the other acceptance of the imperfections of the natural world.

While not a challenging and novel-like entertaining read, The Zookeeper’s Wife does not come without its flaws. Diane Ackerman, while an intelligent and engaging author, did disappoint in the following areas. For one, while she states her sources- such as Antonina’s diaries, Jan’s recollections, and various postwar interviews- Ackerman provides very few endnotes, leaving whether some of the book’s detailed conversations were written as verbatim quotes or rebuilt uncertain.

Also, I found the book’s ending to be rushed and unsatisfying. Her discussions of the life of the Zabinskis after the war as well as on to what she refers as “radically compassionate acts” were rather disappointing in the sense that they were brief as well as sketchy. Despite these imperfections, the Zabinskis’ story is one that is moving and Diane Ackerman tells is with swagger and vigor.

Get a verified writer to help you with Zookeeper’s Wife 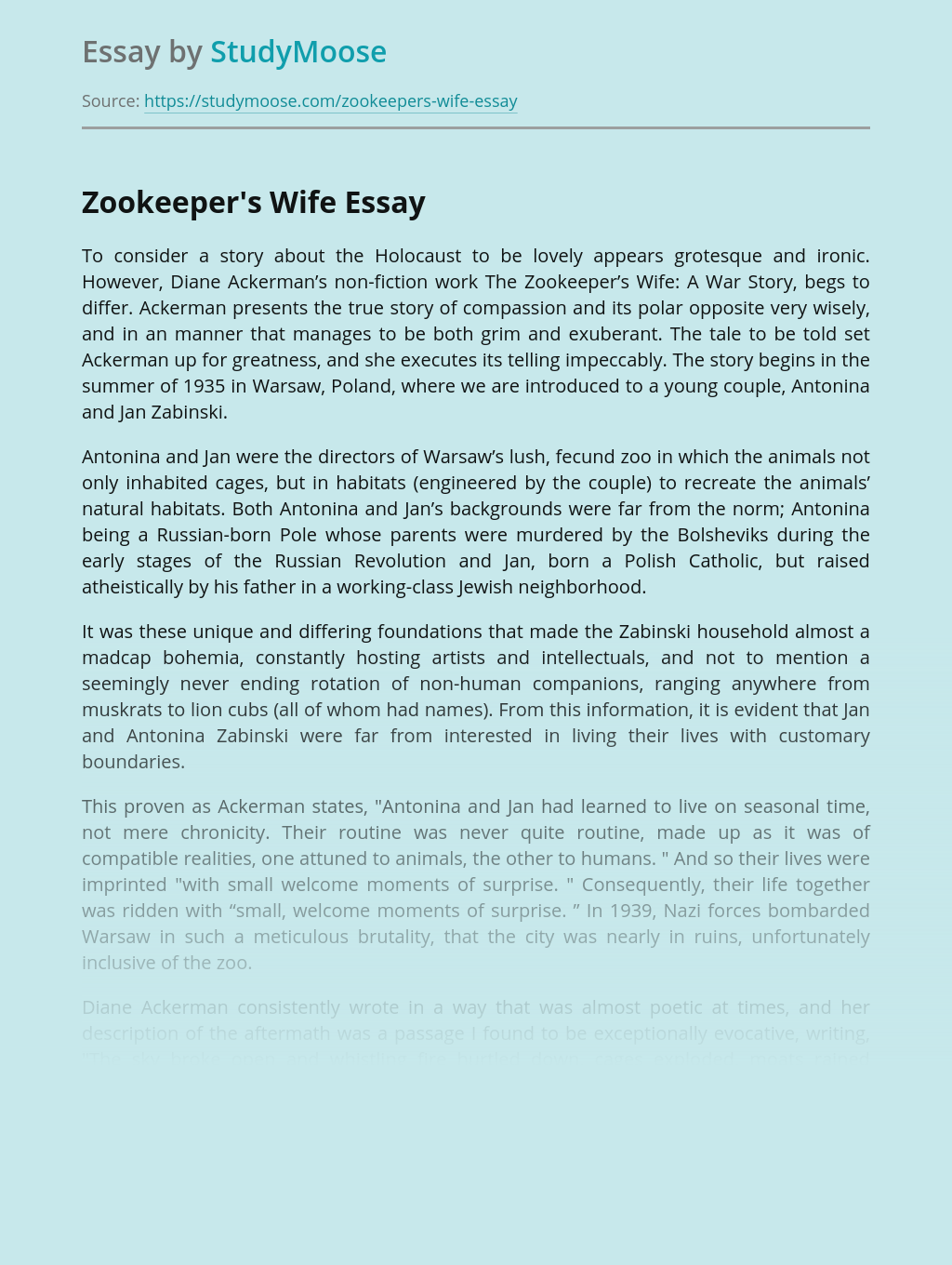 The Book Thief by Markus Zusak: Role of Death Character

About two weeks ago, I had the opportunity of attending a deaf event which was about deaf jewish life in Germany and Eastern Europe in the 1940’s and the Holocaust at California State University Northridge. This event was a great experience and really interesting to know. Not only was it a personal experience from the...

Get Essay
A Little Knowledge can be a Dangerous Thing

Throughout history there have been many individuals whose statements have made an impact on the lives of those around them and on the world. A person may say something out of impulse that sounds bizarre, but when others realize what was said they begin to feel moved. Alexander Pope once said, “A little learning is...

If I were to base my opinion of Jewish people solely on Mordechai Richler’s “Son of a Smaller Hero”, I would probably start wearing a Swastika on my arm and pledging my allegiance to the fuehrer. Richler characterizes Jews as a people who have an enormous lust for money, women, and power. Richler delivers a...

Most Important Turning Point in WW2

Was Hitler Really To Blame For WW2?

Some people say that Hitler was to blame for the 2nd world war, but what did Hitler actually do to cause it? We know that Hitler hated the Treaty of Versailles. But was Hitler’s feelings against the treaty the reason why the World War started. Germany received the treat when they signed the armistice to...

Was the Treaty of Versailles Too Harsh on Germany?

The Treaty of Brest-Livosk cannot measurably be compared to the Treaty of Versailles. It is more akin to the Treaty of Ghent. Remember, that as a strategic political move, giving up the Baltic countries, which were small and geographically closer to Germany than to the Soviet Union,didn’t appreciably decrease the Russian landscape. In 1939, as...

To what extent was the rise to power of Hitler due to personal appeal and ability?

Hitler’s meteoric rise from leader of a weak and small party in the 1920s, to absolute ruler of Germany from 1933–1945 is one of the amazing rise to power stories in world history. Many political factors contributed to his rise to power – some external and some internal factors. Along with these factors, Hitler’s personal...