In The Odyssey, the act of heroism and storytelling plays a significant role in portraying the story of Odysseus. According to the standards of the Greek society, The Odyssey depicts a different aspect of a hero in which an older, more established man already starts off as a hero, but must regain his dignity after falling into a crevice of turbulent times . When pieced together, each aspect that is told becomes part of a whole however, each with a different unique function within the epic to express the Greek’s view of a perfect hero.

Don't use plagiarized sources. Get your custom essay on
“ Similarities of Odysseus and Theseus Character Traits ”
Get custom paper
NEW! smart matching with writer

In modern societies’ terms however, The Odyssey is comparatively different from other hero myths, nevertheless, it is still distinguished as one of the most dramatic and well crafted novels of all time (Griffin 46).

Because of this, some would call the story of Odysseus inferior and subservient, but in realit, it really is a unique work of literature that is uncommon for its time. The Odyssey contains numerous examples of a hero’s journey which can be compared and contrasted with other Greek myths such as the stories of Theseus, Jason, Hercules, and Perseus.

However, Homer’s Odyssey doesn’t contain and follow some of the classical rules of a hero’s journey by telling the story of a older, well established hero, yet it is considered far superior compared to other hero myths through its vivid character development of using real-life characters and an adventurous plot to tell the tale of Odysseus, the godlike mortal man.

Several characters in The Odyssey refer to Odysseus as a god or in their mind think that he is immortal because of his incredible, unique qualities and assistance from Athena which makes him taller, larger to the eye, and more clever by inspiring him as well as Telemachus. He also changes moods and reacts to certain events very quickly as well as announcing his intention of testing his servants by moving among them in disguise. The king of the Phaeacians even asks the concealed Odysseus if he was a god, and the nervous suitors were alarmed as the violent spirit of Odysseus emerged from his beggar’s tattered rags (Fagles 439).

Even Penelope, hearing of the slain suitors, refused to believe that her husband has returned and slaughtered them all single handedly. “But the story can’t be true, not as you tell it, no, it must be a god who’s killed our brazen friends-up in arms at their outrage, heartbreaking crimes (Fagles 457).” Goddess Athena makes Odysseus taller and more handsome, which is characteristic to the gods, to overcome many of his obstacles and to gain the favor of many of his accountancies. These godlike depictions show how the Greeks exemplify ones appearance, thus to gain the approval of others, even when their appearance is of a common class citizen.

One of the most enticing qualities of The Odyssey is its ability to bring in common, everyday characters to help the more fabricated characters like Odysseus. Several servants, maids, and farm workers add to the story’s overall authenticity and creates a uniqueness otherwise not captured in tales of epic hero’s such as Perseus or Hercules. When Homer published The Odyssey, it received numerous complaints by the critics because during that time, it was uncommon to have the lower class of society involved in any novel with someone as great as Odysseus. One of the most astonishing parts of the myth was when Odysseus disguised as a beggar, quarreled with the real beggar Irus who was jealous and greedy of Odysseus. “Irus hurled a fist at Odysseus’ right shoulder as he came through with a hook below the ear, pounding Irus’ neck, smashing the bones inside (Fagles 378).”

This fight between a poor man against a wealthy king played a significant role in the story, since it convinced the suitors that this was just a common beggar, not Odysseus coming back to reclaim his kingdom. Odysseus also acquires help from the cowherd and the swineherd which lessens the gap between the classes of society. Ultimately, The Odyssey portrays a wealthy hero stooping down into a low position to serve justice and do what is right in order to set things strait.

The Odyssey conclusively is an epic tale of a hero’s journey which has aspects to it that are similar and different to other myths. A hero’s journey is usually thought of as an insignificant young boy receiving a message or an ounce of courage to defeat a corrupt high status leader and gain his throne to ultimately be looked up to as a hero. Odysseus starts out as a hero, but on his quest is confronted with tragedy and must try to reclaim his prowess and kingdom. However, instead of using his brawn to defeat the corrupt leader, Odysseus uses his wit and the aid of some unexpected characters. One hero that Odysseus can be compared to is Theseus.

The Odyssey can be measured with the Greek myth of Theseus in many ways to show their similarities and differences and relatively depict its entire meaning to a hero’s journey. In the story of Theseus, the young boy was being harassed by the other, stronger boy in his village. This is like Penelope being harassed by the hundreds of suitors. As young Theseus lay sleeping on the beach, a bird sent by Athena gave him a revelation and inspired him how to beat his opponents, thus starting his journey. Telemachus’s journey started when Athena told him to seek out for word of his father from Nestor in sandy Pylos or from Menalaus. Odysseus, as well as Perseus, Hercules, and Jason were all confronted and helped by Athena at one point or another.

The Odyssey is an odd example of a hero’s journey, however, what makes it different makes it unique and enthralling. The act of heroism plays an important role in portraying the story of Odysseus. The Odyssey is an exemplary example of a hero’s journey which can be comparative to other Greek myths. However, it is different from other myths because it doesn’t follow some of the contemporary views of a hero’s journey by painting the lifeol of an older, well established hero, yet it is thought to be much more advanced compared to other hero myths through its lifelike character development of using low-class characters and an enticing plot to tell the tale of Odysseus, the godlike mortal man. 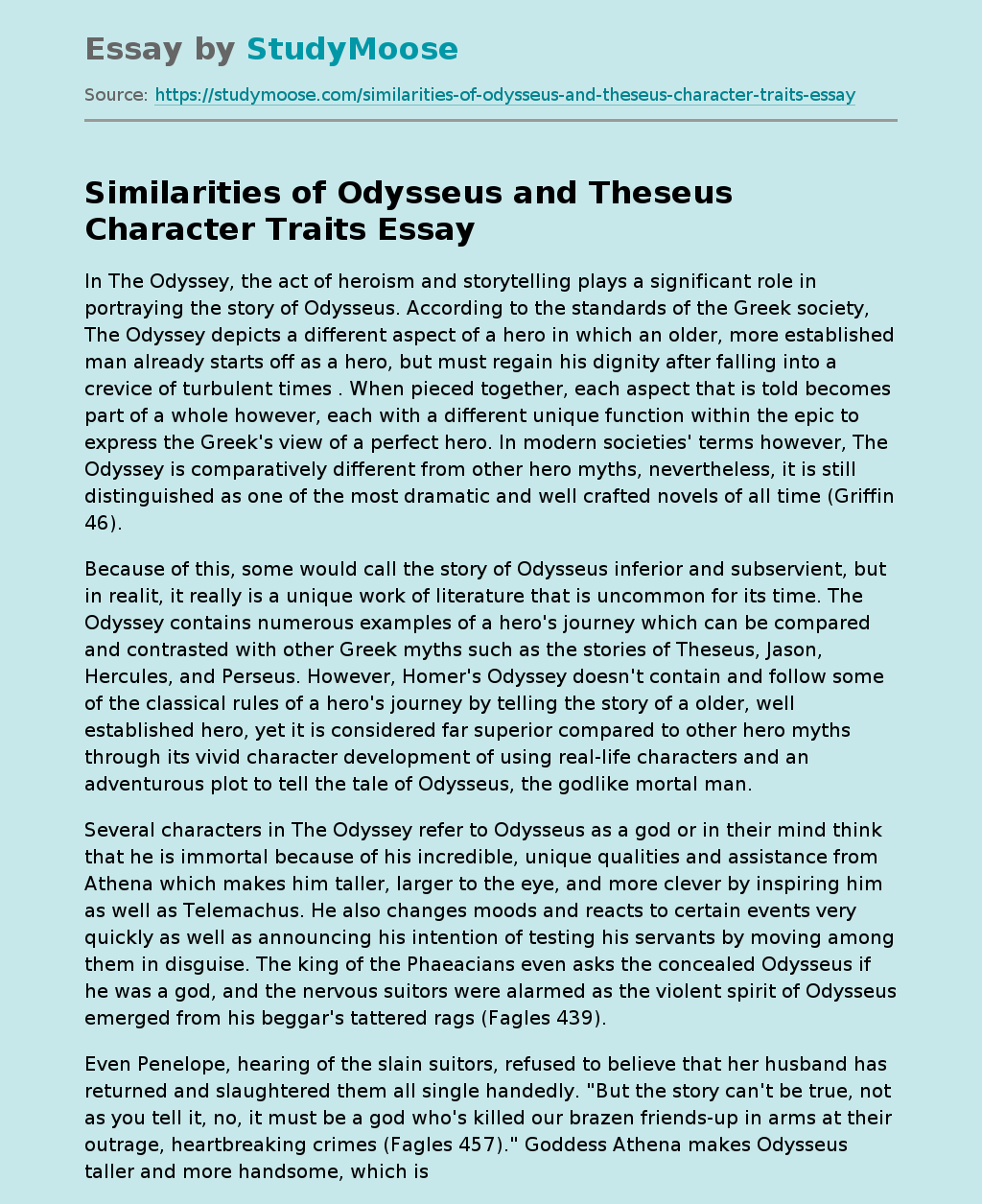