"Catcher in the Rye": Not a Bildungsroman

Bildungsroman: a coming-of-age novel. Many critics and readers alike have argued that JD Salingers Catcher in the Rye is a superb example of a bildungsroman. The novel is a narration by Holden Caulfield, a troubled and mentally unstable sixteen year-old that has just been expelled from his fourth prep school. Holden, who is undergoing treatment in a mental institution, recounts the story of his mental breakdown and the events leading up to it. He concludes the story with brief hints at his recovery.

Don't use plagiarized sources. Get your custom essay on
“ “Catcher in the Rye”: Not a Bildungsroman ”
Get custom paper
NEW! smart matching with writer

Though one assumes that Holden is receiving and responding to treatment, his attitude and tone are unchanged throughout the novel.

If the protagonist has not matured since story began, how can Catcher in the Rye be considered a bildungsroman?The novel opens with Holden carelessly tossing around the fact that he has been expelled from Pencey Prep (page 2). Though Holden has previously been kicked out of three other prestigious schools, he is completely apathetic about the situation. He has no drive; no concern or outlook for his future whatsoever.

Even after everything that Holden experiences throughout Catcher in the Rye, his attitude is unchanged at the conclusion: and what school Im supposed to go to next fall, after I get out of here, but I dont feel like it. I really dont. That stuff doesnt interest me too much right now (page 213). That statement unequivocally proves that Holden has not matured at all.

Contemptuous, bitter, judgmental: take your pick. Each word describes Holden to a tee; not just in the beginning, but throughout the entire narration.

Holden is constantly judging everyone he comes into contact with. He speaks about Mr. Spencer (page 10), a professor at Pencey Prep, in the same patronizing tone that he describes a particular psychoanalyst with (page 213). Though the events take place several months apart, Holdens attitude is consistent. He continues to have a cynical, patronizing, and overall pessimistic outlook on people and life in general.

If Holden is just as immature and mentally undeveloped at the end of the novel as he was at the beginning, how can one argue that he has come of age? Having a mental breakdown and needing treatment for said breakdown may very well be considered a rite of passage. However, to be considered a coming of age story, Holden would need to be changed for the better because of his rite of passage. One can clearly tell from his consistency in tone, attitude, and maturity level (or lack thereof) that Holden has not changed in the least. Though many critics and readers alike have claimed Catcher in the Rye to be an excellent bildungsroman, there is certainly a strong argument to be made against this claim.

"Catcher in the Rye": Not a Bildungsroman. (2016, Jul 27). Retrieved from https://studymoose.com/catcher-in-the-rye-not-a-bildungsroman-essay 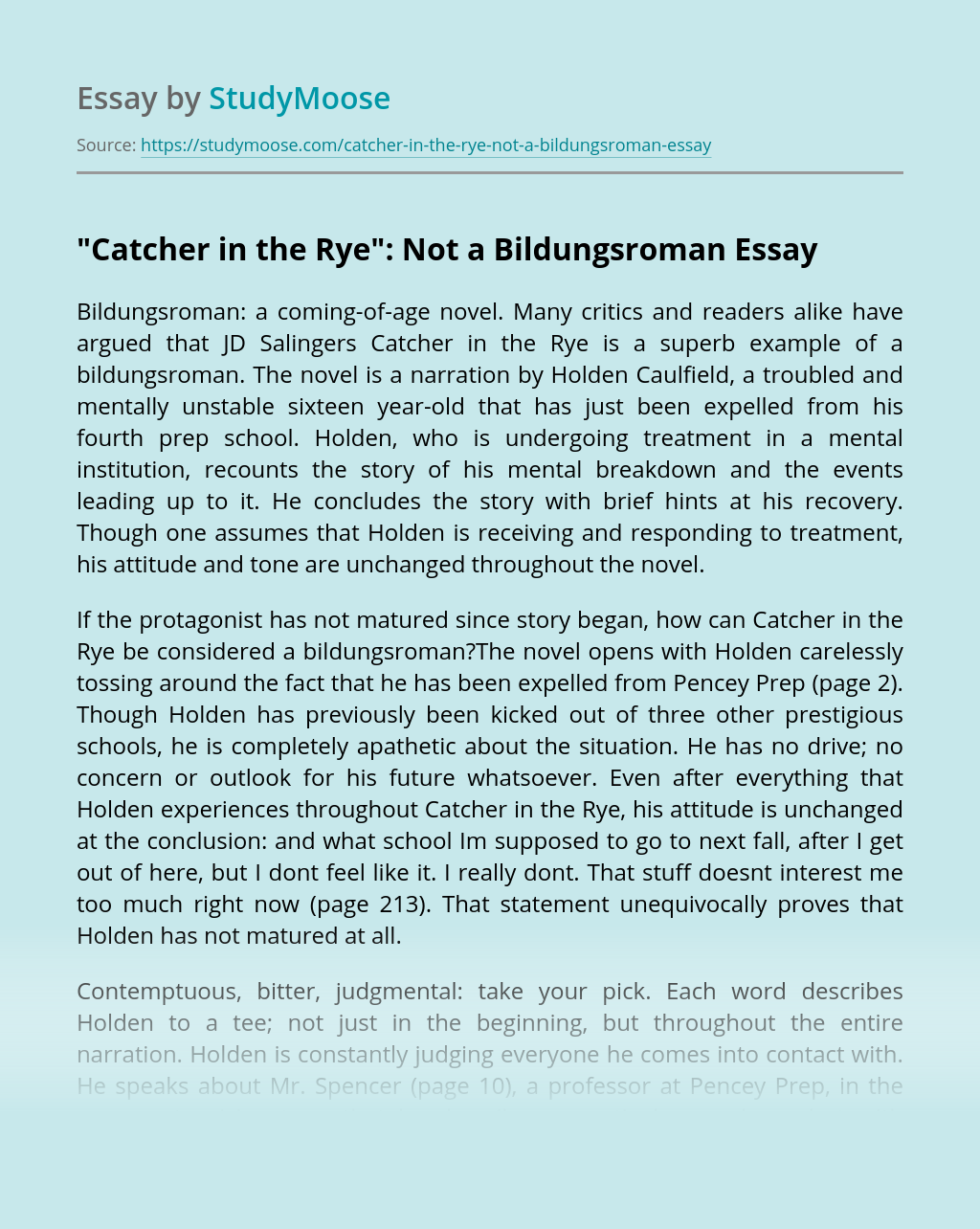