Holden Caulfield Is an Island

John Donne’s quote, ‘No man is an island’ connects quite directly to Holden Caulfield in ‘The Catcher in the Rye. ’ Holden’s character is very relative to themes such as isolation, loneliness and non-conformity. Holden has a very distinct character; he has many features, which would describe him as quite a lonely, cynical young man. It is evident that a past of his has had such an effect on him that the adolescence he has become quite a rocky journey for him; the death of his brother Allie, and the suicide of one of his schoolmates included.

Don't use plagiarized sources. Get your custom essay on
“ Holden Caulfield Is an Island ”
Get custom paper
NEW! smart matching with writer

How is Holden Caulfield an island?

Well, the quote itself – ‘No man is an island’ – can be interpreted that no man will thrive in isolation, such as an island. Holden has isolated himself from the conforming ways of society. This explains why he finds it so hard to be close to people, and why people find it so hard to get close to him; because he is so different.

Holden’s character can be described as one that is flying off the rails. Some events throughout the novel regarding alcohol and drugs, relationships and Holden’s whereabouts show that he is simply trying to be something he isn’t.

Holden Caulfield is an island, throughout the novel, a word to describe him best would be ‘alone. ’ Those who attempt to help him, guide him and be there for him, such as Spencer and Mr. Antolini, generally fail as Holden makes a quick escape from their guiding hands.

In some ways, Holden can be seen as a hero. It is much harder to go against the grain alone, than to follow along in the footsteps of others. Holden can be understood as a leader, rather than a follower. Although his purpose is not quite evident, his journey is still worth so much.

Holden’s personality includes features, which define him as a very judgmental person. He often uses the term ‘phoney’ to describe people who aren’t true to themselves and who according to him, squeezing into a certain cut out. Holden is very set in his ways, and will generally not take on the opinion of anyone else, and will stick to his own very closely. An example of Holden preferring to be alone is when he informs his sister that he will be leaving home. He organizes a meeting with her before he leaves. She arrives with her belongings and asks to go with him.

It is not that Holden loses his temper, and refuses to take her along. After Holden leaves Pencey Prep at the beginning of the novel, he makes the decision to find his way around Manhattan alone, with out telling his parents; for a few days before he is due back home. To most sixteen year old teenagers, to make this decision would be a big move, but to Holden, a stunt like this doesn’t concern him. This just shows how far he goes to prove himself to be an individual, who can take care of himself, Holden feels he doesn’t need anyone but himself, as he is left alone by the end of the story.

Throughout the novel, is it clear that the story is about Holden’s journey, and Holden Caulfield being an island. The events and occurrences that happen to Holden along the way prove this statement to be true. Holden has a very strong character, that of which he remains tough; he does his own thing, in his own way; without the need for approval from anyone. Holden Caulfield has isolated himself from the conforming ways of society. Therefore, Holden Caulfield is an Island.

Holden Caulfield Is an Island. (2016, Oct 02). Retrieved from http://studymoose.com/holden-caulfield-is-an-island-essay 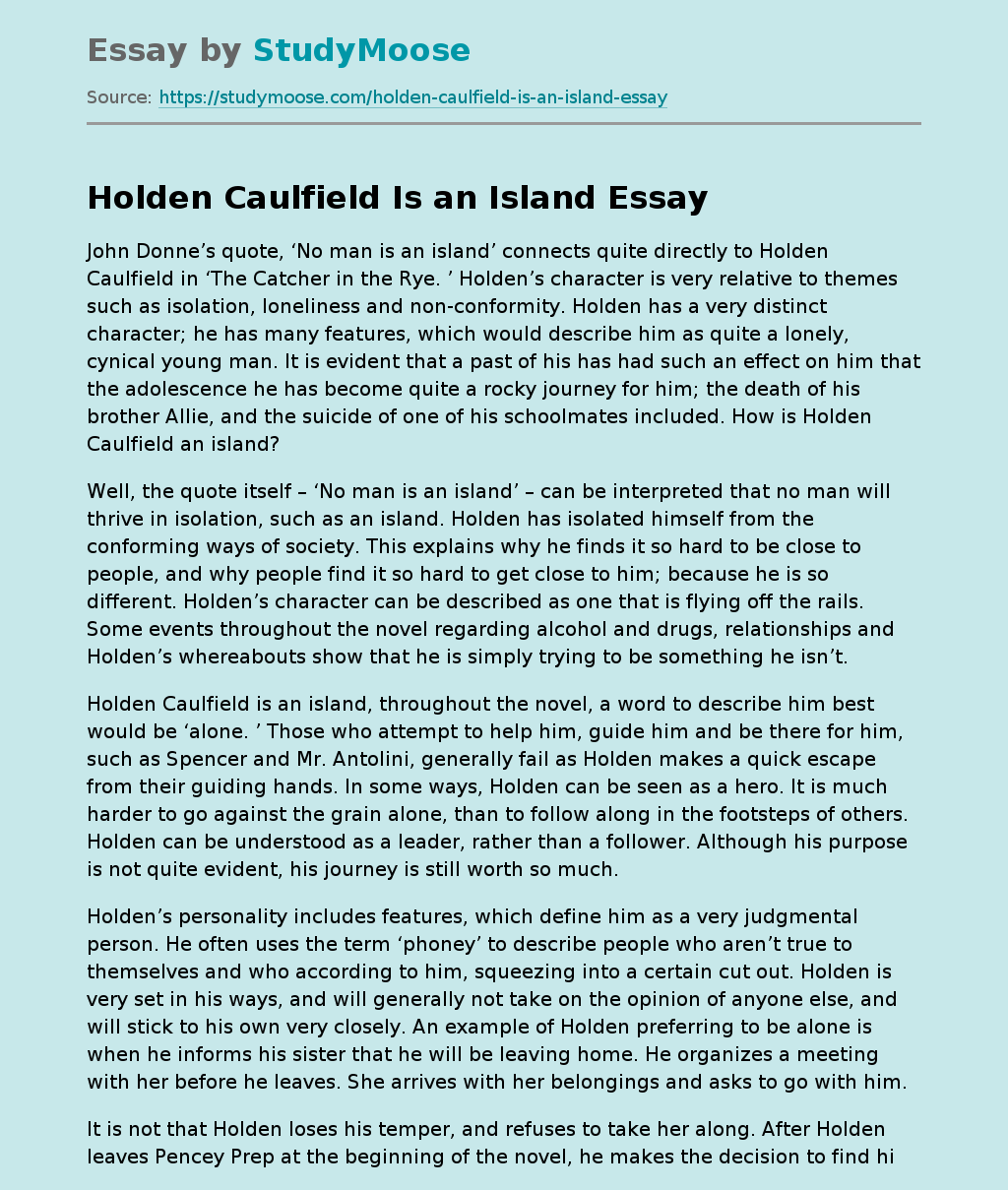