"You Touched Me" D.H. Lawrence

Due to the variance of education background, social environment and personality derived from human nature, every individual has his/her distinct standard of living, social sense and emotion. People who have different minds and living objectives interact with each other in every human community, and the morality has been historically obeyed by general public as the calibration of evaluating one’s characteristic. Although the social morality gradually alters, most people comply with it either for self mentality pursuit or public reputation.

In the early twentieth century, public took the ethicality and morality very seriously, and this arose contradictions with human’s free will and instinct for self benefit. “You Touched Me” from D.H. Lawrence and “The Boarding House” from James Joyce each tells a story that ends with one controversial marriage in the conservative Europe. By comparing two stories, it can be seen two have similarity on scenario about emotion development and plot towards benefits, whereas in contrary the characters received different endings after battling under pressure due to morality.

The scenarios about emotion development in two stories are very close. Emotionally love and respect each other is the foundation of marriage. These two marriages mentioned are abnormal but similar, for they have an agreement that the devotion of emotion is unilateral. In “You Touched Me”, Hadrian “shan’t forget” (Lawrence 423) Matilda’s touch even though he knew “it was a mistake” (Lawrence 423), whereas Matilda was more biased and resisted the marriage. In the case of “The Boarding House”, Polly was extremely enthusiastic about the relationship with Mr.

Doran, whereas Mr. Doran was so passive in this relationship, disliked Mooney’s family, and hesitated in making choices between morality and his future till the very end. In order to rationalize the occurrence of the single devoted relationship, each story provides one sufficiently detailed accident.

In “You Touched Me”, Matilda accidentally entered Hadrian’s room, “leaned over the bed and stirred her fingers over the low-growing hair on his brow” (Lawrence 417) and even talked with Hadrian unexpectedly. Hadrian, a “Charity boy” (Lawrence 416) that had less love in his childhood and now is a young man, heard the love-and-care-containing voice from a female in midnight for the first time, and then engraved Matilda into his mind. The incident in “The Boarding House” is a little different. Polly “tapped” Mr. Doran’s door in a late night and just wanted some help to “relight the candle” (Joyce 409). It was Polly’s beauty and the enchanting perfume made Mr. Doran out of control and he took “the advantage of Polly’s youth and inexperience” then. For Polly is still a young girl and is not sophisticated, she loved Mr. Doran desperately after they two had relationship. In both stories, establishment of emotional relationship is well explained by providing details of accident, and the “accident-trigger, relationship-receive” pattern indicates the similarity on the scenario of the emotional development.

In both stories, all main characters except Polly have considered benefits for themselves and most of them are bundled with others by complicated financial relationships. In each story, there is one character that is always thinking too much about acquiring benefits from others. Since marriage always leads to redistribution of property, in “The Boarding House,” Mrs. Mooney “intervened” (Joyce 406) only the at the “right moment” (Joyce 406) , when Mr. Doran just had relationship with Polly. Despite some little consideration of finding Polly a good husband, the late intervention can only be explained by Mrs. Mooney’s plot towards Mr. Doran’s property and social status. For Mr. Doran “had money enough to settle down on” (Joyce 408), “has been employed for thirteen years in a great Catholic wine-merchant’s office” (Joyce 408) and was also reputed, Mrs. Mooney was so deliberate that kept her silence and watched the pair till something really happened.

Only if she did the intervention late, she would have the most powerful weapon – the pressure from public, and then can make sure Mr. Doran will marry with Polly. The situation is different in “You Touched Me”. Emmie, the youngest girl in the family and is less praised on the appearance by the author, is more greedy and less wisdom. When guessing the motivation of Hadrian’s return, she first thought Hadrian was coming for money and shown no welcome. After Hadrian proposed to Matilda, Emmie again absurdly determined the proposal was just for money. Her cupidity was further amplified by her exaggerated activities after her father modified his will, such as cursing her father and frightening Hadrian. Despite these two people, Mr. Doran, Hadrian and even Matilda have once considered their self benefits from the marriage; however, their activity and decisions are all affected by another important factor: morality.

People take morality as the characteristic calibration; however, over emphasized on this factor will arise contradictions with human’s free will and instinct for self benefit. “You Touched Me” and “The Boarding House” both ends with marriage; nevertheless, morality played different role. In “The Boarding House,” Morality forced two Mr. Doran married with Polly. Mr. Doran had relationship with Polly, and he was then morally condemned. Besides the fact that “his instinct urged him to remain free” (Joyce 408), he disliked “her disreputable father” (Joyce 408), “her mother’s boarding house” (Joyce 408) and even the “little vulgar” (Joyce 408) Polly when he seriously considered the marriage affair. However, as a reputed man, he needed to reparation the immoral thing he did; otherwise he would not only condemn himself but also suffer others such as accusation from public. “What could he do now but marry her or run away?” (Joyce 408) shows that he fully understood his embarrassing situation.

As a result, Mr. Doran compromised with the morality. In “You Touched Me”, morality prevented Matilda saying yes to Hadrian’s proposal. Matilda resisted marry with Hadrian not because of money but morality. Matilda first believed that marrying with a younger man is immoral, especially when the one is her adopted younger brother. However, when she found out she was unable to answer how physically and psychologically “indecent” (Lawrence 423) the marriage with Hadrian would be, she changed her mind. As an obedient daughter, she took her father’s opinion and married with Hadrian after deep consideration. These two stories emphasize on the moral effects in people’s daily lives, and indicate few people can ignore the existence of Morality.

In conclusion, by comparing and contrasting these two short stories, it can be found some similarities on characters’ emotional relationships and their human nature about asking for self benefit. Most important, the mentally battle against morality have been conducted in both stories, and it can be deduced that and morality rules people’s and living style most of time. Emotion, benefit and morality constitute major part of one’s life, these two short masterpieces concentrates these three factors and expressed in them literal and vivid story. It is necessary to understand the underlying plot and philosophy in both stories. 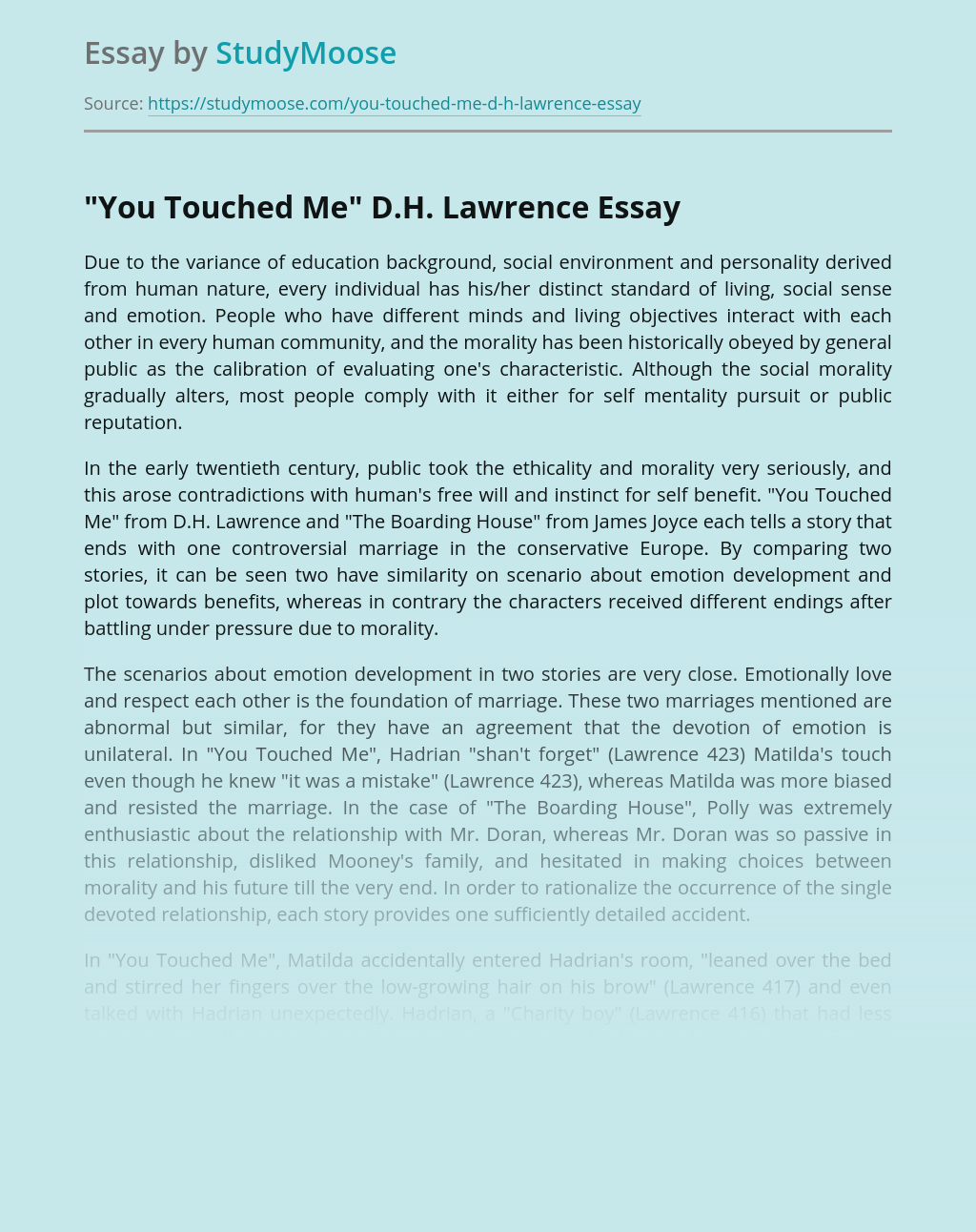 Don’t waste time
Get a verified expert to help you with “You Touched Me” D.H. Lawrence
Hire verified expert
$35.80 for a 2-page paper
Stay Safe, Stay Original