Bicycle, fish, airplane, hat, card, homework, swing, flower, picture, sunglasses, watermelon, puddle, school bus, and lawnmower are words that connect with people with his or her memories in some way. An instant word can bring memories back into his or her reality. Their memories can be so vivid that their dreams may feel like present day. The stream of consciousness can take one word and recreate your whole past. In the poem, “Piano”, written by D.H. Lawrence, the narrator is affected by the word piano.

Don't use plagiarized sources.
Get Your Custom Essay on D.H. Lawrence’s “Piano” poem Just from $13,9/Page

A woman sings softly to him while he reminiscences about his childhood and his happy memories of his mother. The narrator feels betrayed by the song that has sparked him to rethink the recollections. In his remembrance, the narrator cries for his lost past. In “Piano”, D.H. Lawrence conveys the meaning of the poem with very distinct tones in each stanza: in the first, the tone is mellow; in the second, bitterly resentful; and in the third, the narrator is melancholic.

In the first stanza, the meaning is expressed with the tone that is conveyed as warm, mellow and tranquil. Lawrence uses words and phrases such as “Softly”(L1) and “in the dusk”(L1). These words express the atmosphere the narrator is in while he reminisces about his past. The narrator dreams of playing the piano with his mother and being aware of all the senses that he felt. “Softly”(L1) is also connected with the word piano. In musical terms, piano means to play soft and the word guides you through the song. “A mother who smiles as she sings”(L4) is a pleasant memory for the narrator because he is unaware of his present surroundings of another woman singing. A mellow tone communicates to the reader that the narrator is in a dream like state of mind.

Through the mellow tone the reader can capture a mental picture of what he is imagining. “A child sitting under the piano, in the boom of the tingling strings”(L3) has connected with the reader of what the narrator is dreaming. The reader feels like he or she exists in his state of mind. The sound of the piano is felt. There is a vivid picture of the narrator connecting with his mother while they play the piano together. The mother and son seem to smile as they play and obliviously they are having a good time. The reader is able to connect with this image because of the warm tone portrayed in his
memory. The readers will often recreate their own memories with the same warm tone in their everyday life.

The reader understands the narrator’s bitterness because of the image the stanza portrays. The “insidious mastery of song”(L5) brings out feelings of betrayal in the narrator because he feels that the song is the cause of his memories. The narrator might feel like he was tricked into reminiscing by the song and piano. “Hymns in the cozy parlor, the tinkling piano our guide”(L8) shows the reader that he was very comfortable with his mother. It also gives the reader a sense a home. For instance, it may remind somebody of the holidays when all of the family is around and enjoying each other’s company. The reader can sense tension between the past and the present of the narrator. The harsh image of the narrator being bitter towards a song seems silly but the reader can understand his bitterness by bringing his or her own memories into account.

The visual image and meaning in the third stanza is portrayed through the melancholic tone. The reader can sense many emotions that are connected with the narrator and his past. The sadness he feels is shown through his weeping. The narrator obviously had a loving, deep connection with his childhood for him to feel this way. The reader also feels a little discomforted because of the intimacy of the reader and the narrator’s expression of grief. In everyday life, people do not usually express their sadness with such an open relationship, especially for grown men. The third stanza lets the reader confront the reminiscing feelings that we all share with the narrator.

Lawrence uses specific words, phrases, and mood to convey the visual image through his poem. The meaning of the poem is suggested through each stanza’s tone. With each changing emotion the reader feels that himself or herself are incorporated into the mood of the narrator’s feelings. A humanizing touch is needed for the reader to feel connected with the poem. Lawrence uses strong words and simple sentences to juxtapose the piano playing in the narrator’s memories with the lyrical, emotional, and musical stanzas. The three distinct stanzas that convey the meaning of the poem are mellow, bitter, and melancholic that describes the narrator’s feelings as well as many other readers as they read the poem. 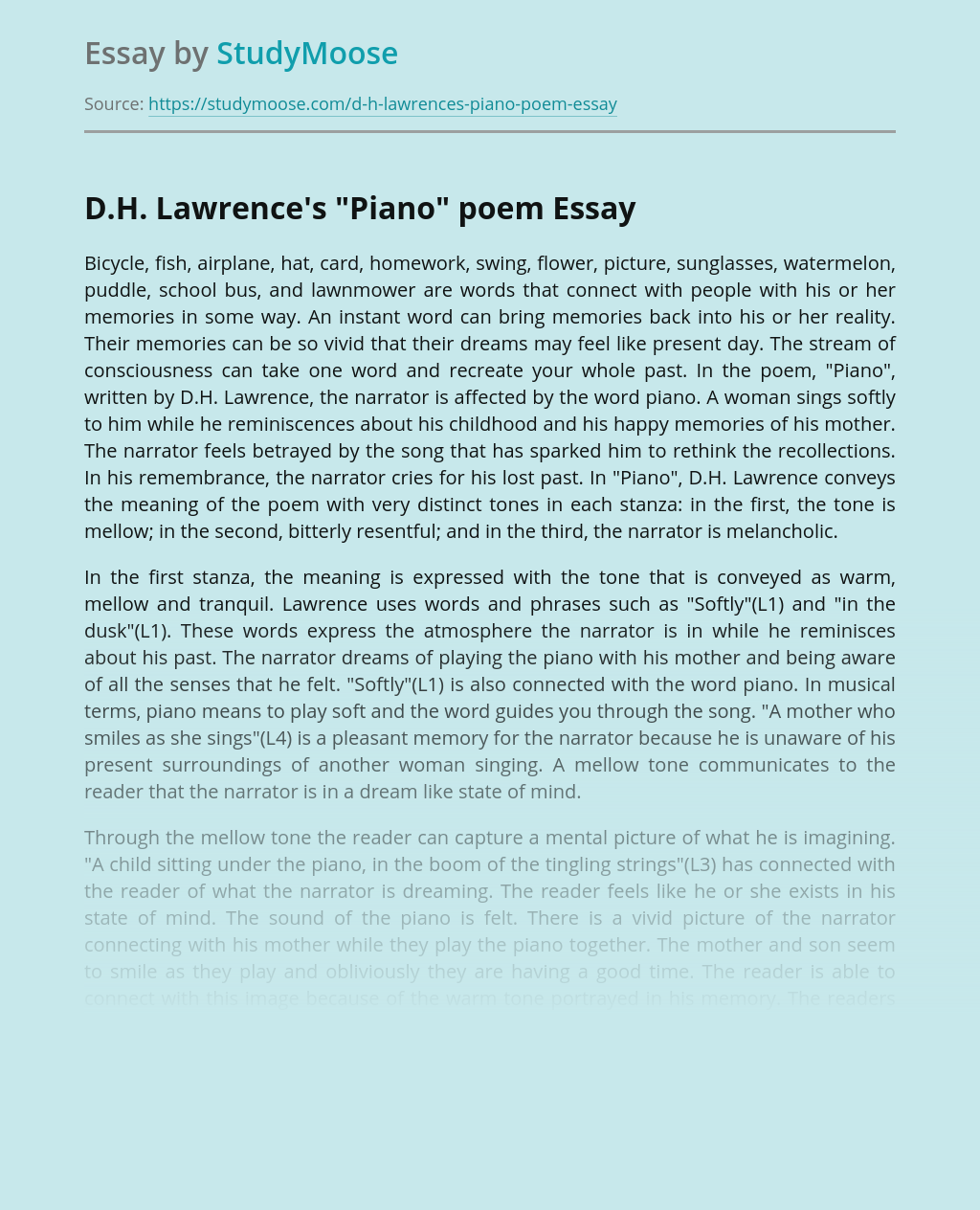 The introduction of school uniforms in the public school system would make a positive change for the students and the entire school. A common argument today is whether uniforms should be introduced to the school system. I agree for many different reasons. The main reasons for having uniforms are; it would prevent violence,parents will save... VIEW ESSAY

View sample
Get Essay
Ride a motorcycle and be safe

Riding motorcycles are dangerous, but fun at the same time. Being able to ride on an open road is fun, when there is light traffic or no traffic at all. The danger that a motorcycle brings is falling, hitting a pot hole at excessive speed or even a rock can cause you to lose control... VIEW ESSAY

Duffy presents relationships in the poems adultery and valentines in different ways. In adultery the title suggests betrayal and deceit. It explores the wife’s feeling towards her husband’s infidelity. Whereas in valentines, Duffy shows the different ways we love people and challenges the true meaning of love. Adultery is a regular structure of 11 stanzas.... VIEW ESSAY

View sample
﻿Academic excellence is the only way to success

What is academic excellence about? Is it how many marks we get? Or is it the number of competitions we win? It is much more than that. We often say that getting good marks is what academic excellence is about, but no it is the process of education we go through. From learning ABC in... VIEW ESSAY