Analysis of "The piano" by D.H. Lawrence Essay

The speaker in “Piano” by D. H. Lawrence is proud to be a full grown man, yet he loves remembering his happy childhood; his nostalgic attitude causes him to feel guilty as if he had betrayed his present state of being. Through effective imagery, Lawrence is able (to describe an image) to help the reader understand the speaker’s nostalgic attitude. The diction and tone used in this poem reveal the speaker’s struggle as his feelings mix between his desire to be a man and his desire to return to his childhood.

Don't use plagiarized sources.
Get Your Custom Essay on Analysis of “The piano” by D.H. Lawrence Just from $13,9/Page

The syntax and structure of the poem keep the reader in tune with the flow of the poem. In this poem a man struggles to remain a man while fighting off his memories of the past, which he feels would be uncharacteristic of his present maturity.

The imagery in this poem helps to describe a picture in the reader’s mind so that the reader can sympathize with the speaker during his journeys into the past.

In the first stanza, in the first line, the first image is of a woman. In the fourth line the reader learns that this woman is the speaker’s mother. The third line shows an image of a “child sitting under the piano . . . pressing the small, poised feet of a mother who smiles.” This image gives the reader an image, perhaps of a parlor room, of a child about three or four years of age enjoying the music produced by his mother. The love of the mother shines through her smile as she reciprocates to the child’s gentle touch.

Later, in the second stanza, the contrasting image of a cold, snowy night in the winter and the cozy parlor causes the “hymns” to seem doubly warm. This represents the traditional image of a grand family sitting around a warm, crackling fire; they sing carols together and just enjoy each other’s company. The piano in the first and second stanza is described as “tingling strings” and “tinkling piano” respectively. These light sounds help support the warm cheery atmosphere during that time. These memories are what cause the grown man to be nostalgic for his past.

The diction and tone of the poem also show the author’s mixed feelings in the poem. The poem begins with the line, “softly in the dusk” to open the poem with a light, airy image. “Vista of years,” are words used to show his nostalgia as he walks down memory lane. He remembers the “boom” of the piano, which would seem loud to a child who is four-years-old. In the second stanza, he is a little more negative about his memories. The song he is listening to “betrays me back.” He feels that these memories should not be felt with such emotion because they cause him to “weep” as he reluctantly returns to his past. The last line of the poem is also negative as the speaker breaks down and goes “down the flood of remembrance.” He again flows down the flood reluctantly into the past. The tone is quite the same, supporting the diction that the author remembers a happy past, but is reluctant in continuing to do so. He is happy to remember his past, but he feels his “manhood is cast down.”

This poem’s structure and rhyme help bring an organization to the way the speaker shares his mixed feelings. The lines are coupled so that every two lines rhyme. The poem is structured so that in each of the three stanza the author describes an image of the present in the first two lines, and then the last two lines are spent describing his comfortable past. The second line of each stanza speaks of the vehicle that sends him back to the past while the third line of each stanza shows his increasing distress. In the first stanza it’s the singing woman that takes him “down the vista of years.” Next, the song takes him to “the old Sunday evenings at home.” Finally, the “great black piano” reminds him of the past.

The continuing conflict of the speaker’s emotions is described as he enjoys his memories, yet he despises his continuing nostalgia.

Analysis of "The piano" by D.H. Lawrence. (2016, Jun 26). Retrieved from https://studymoose.com/analysis-of-the-piano-by-d-h-lawrence-essay 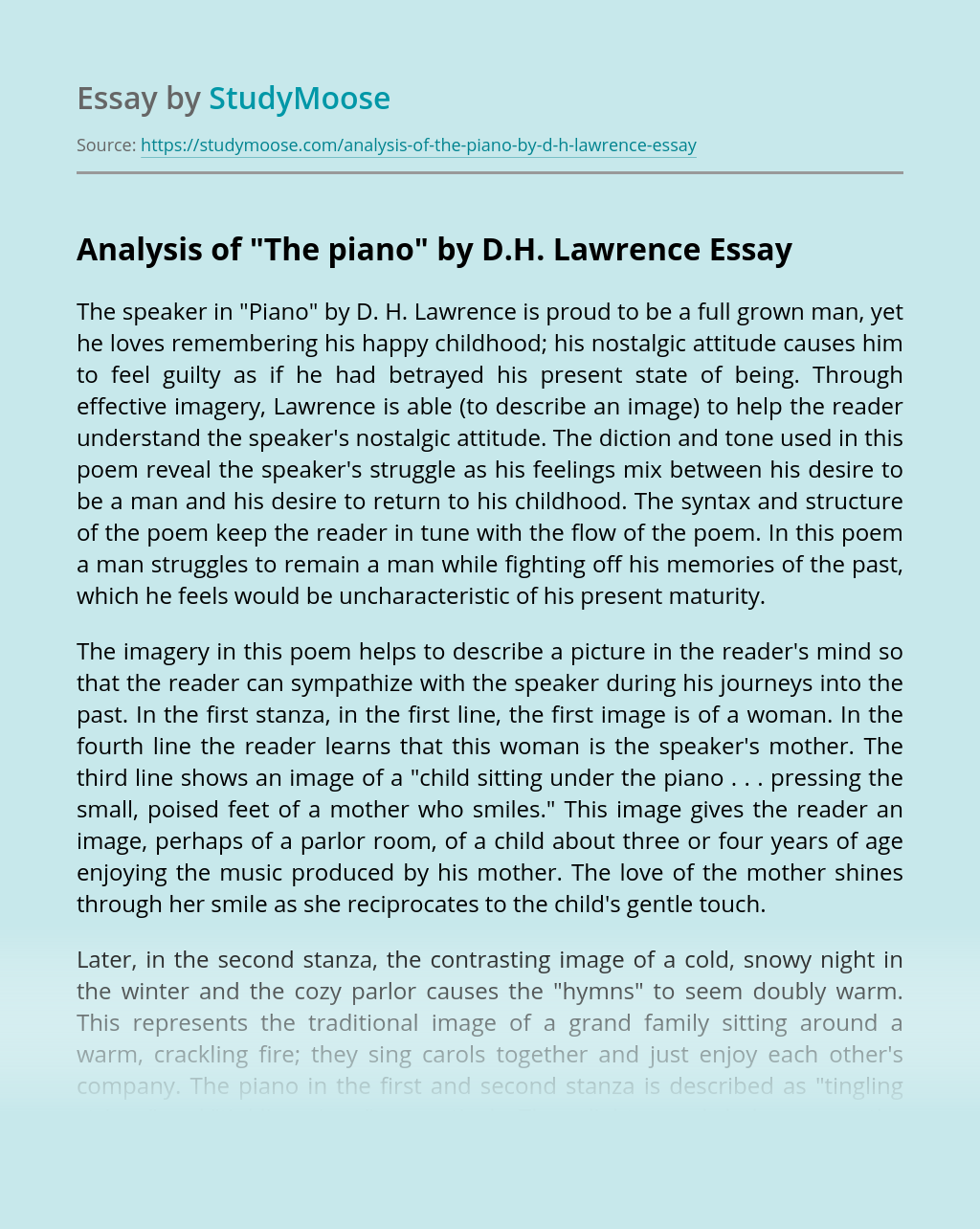 It has been said of cinema that it is much lesser an art that it should be because it cannot afford the unpredictable. Therefore it seeks the security of successfully established formulas (Encyclopaedia Britannica 904). This may be the reason why Korean films, like most Asian films, tend to focus on domestic issues. The most... VIEW ESSAY

View sample
Should Polygamy Be Legalized

View sample
Get Essay
The Great Scarf of Birds

Poetry is structured in several different ways. Much of the author’s way of writing converges the reader into knowing how to interpret the writing. John Updike is on an artificial man-made field (the golf field), and this foreshadows his eventual realization of his detachment from nature. He is playing at Cape Ann in October, and... VIEW ESSAY

1. When Onew & Taemin were practicing on the rooftop in their trainee days, they didn’t know that they would be in SHINEE together. 2. Minho & BoA like playing together at the waiting room (after they both made comeback) and also at pre-recordings. 3. Jonghyun used to LIKE dressing up as girls. But he... VIEW ESSAY

Law in Scotland surrounding agency law is not well explored the recent case of Gray v Braid logistics ltd 2017, Lord Bannatyne had opportunity to explore and resolve these ratification issues in Scots law. The g v b case looked at the English case Bolton v Lambert. This case had only been discussed in two... VIEW ESSAY