Childhood in Half-Past Two and Piano

“Half past Two” is about a young child who has done something naughty. His teacher punishes him by making him stay behind until half past two. However, being cross, she forgets he has not yet learnt to tell the time. Thus, his concept of time doesn’t yet include numerals. He knows he is punished but cannot understand why. During his detention, he recalls the time modules he knows in an attempt to figure out when will he be free again.

Turn in your highest-quality paper
Get a qualified writer to help you with
“ Childhood in Half-Past Two and Piano ”
Get high-quality paper
NEW! AI matching with writers

He escapes “out of reach of all the timefors” into a fantasy world. The teacher has almost forgotten about the boy owing to the triviality of the matter to her, but of great significance to the boy. At last, she scuttles in and lets him go home.

In “Piano”, The persona in the poem is listening to a woman singing and playing the piano. This makes him recall when he was a child, sitting under the piano listening to his mother play and sing on Sunday evenings in winter.

He is nostalgic about the warmth and happiness of his childhood days. However, he seems to berate himself on recalling his childhood and views himself as sad and less masculine for giving in to his nostalgic impulses. With his ‘manhood cast/Down in the flood of remembrance’, he weeps, an act considered inappropriate for a man.

Thirdly, the two poets choose their words prudently. In “Half-past Two”, childish words such as “wicked” and “cross” helps us locate our imaginations within the setting of a primary school. In “Piano”, the positive word “cosy” evokes the warm and happy atmosphere when he was a child. On the other hand, negative words ‘betrays’ and ‘insidious’ convey that he is ashamed of his weakness.

Fourthly, the use of senses can be found in both poems. In “Half-past Two”, in stanza 8, the senses such as “smell of old chrysanthemums” brings alive the scene in the classroom. In “Piano”, the persona hears the woman singing “Softly, in the dusk” and playing the piano, recalling his childhood memories.

Lastly, the mood of both poems is nostalgic and they both have the theme of childhood. The persona in “Half-past Two” is nostalgic about the long-lost childhood which is free from time constraints. It can easily be seen in the last stanza – “He escaped … to be born”. On the other hand, the persona in “Piano” is sad and crying for the time which will never come back after it is forever lost with his manhood “cast/Down in the flood of remembrance”.

For “Half-past Two”, I think punishment is not a suitable way to discipline an innocent child who did ‘Something Very Wrong. He should be explained what the error is. The poet uses the teacher to criticize adults who are dismissive of children, emphasized by ‘she slotted him back’. Adults should care and attend to children more.

Besides, this poem’s effect on me is so strong that it almost brings me back to my merry childhood. I crave for reliving my childhood, when I lived freely without troubles and worries and time constraints.

A nostalgic mood is revealed in the last stanza. It shows that the poet is very nostalgic, reminiscing the childhood experiences when everything is not constrained by time. Moreover, the fantasy world which the child conceives in stanzas 7 & 8 is most people’s utopia, where they can temporarily forget all the stress and worries from work or studies and escape from reality. It is a dream world where all of us can dream about as a solace when we are stressed out.

The poem, “Piano”, has a nostalgic and wistful tone. Hearing the powerful music and soft song, the persona recalls his pleasant childhood memories. He reminisces that he sat ‘under the piano… pressing the small poised feet’ of his mother. However, in the last stanza, ‘my manhood is cast/Down in the flood of remembrance, I weep like a child for the past’. It appears that the persona is rather sentimental and melancholic. He is sad and crying for the time which will never come back after it is forever lost.

Besides, the ‘Tingling strings’ and the ‘mastery of song’ strongly evoke the persona’s pleasant childhood memories. It also brings me back to the time when I was a child, learning how to play the piano. I regret not taking piano lessons seriously at that time and dropping it at last. We should treasure everything we possess before they slip away.

In my opinion, the persona, being a man, should not cry hastily. I think it is very embarrassing for a grown man to weep. He attempted to restrain his emotions but failed. His heart ‘weeps to belong’ and eventually he bursts into tears. His weeping is uncharacteristic of his present maturity.

Nevertheless, I prefer “Half-past Two”, because it can fully depict the helplessness of the innocent child being kept in until half past two – a time completely unfamiliar to him. I also like the tone of the last stanza. It can trigger my deeper thoughts. It makes me realize that the land where “time hides tick-less waiting to be born” is a utopia where many people can temporarily forget all the stress and worries and relax.

Childhood in Half-Past Two and Piano. (2017, Mar 02). Retrieved from http://studymoose.com/childhood-in-half-past-two-and-piano-essay 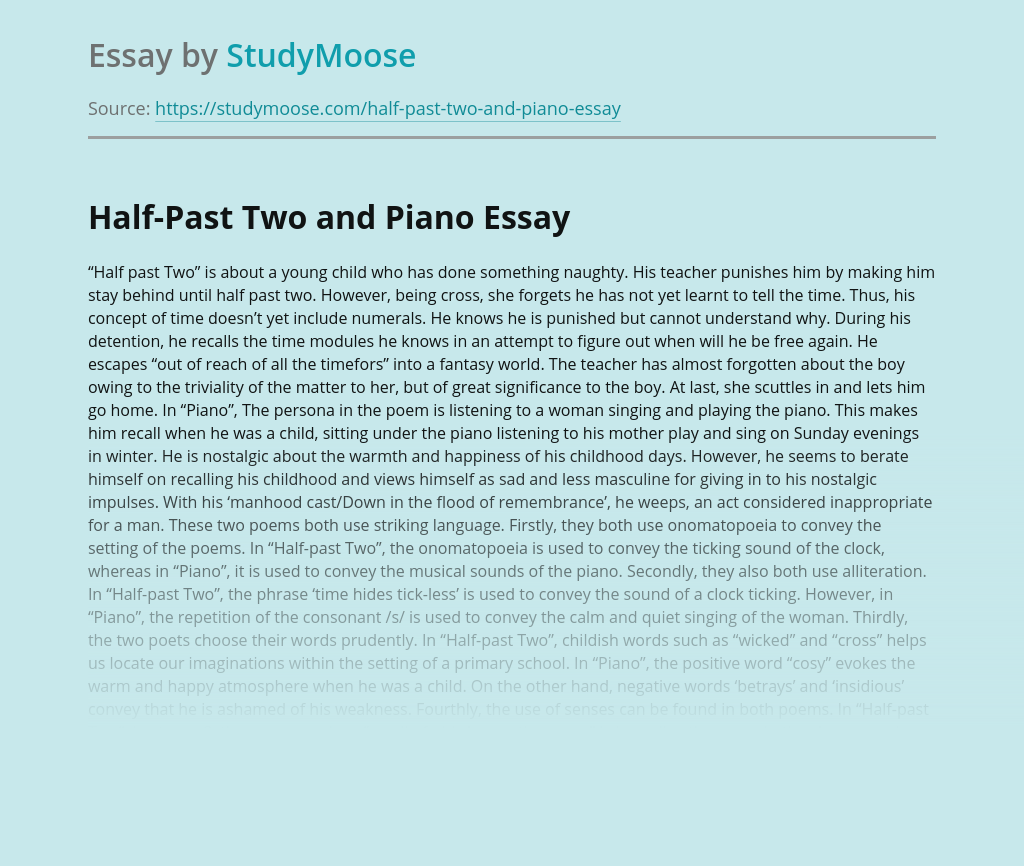 Turn in your highest-quality paper
Get a qualified writer to help you with
“ Childhood in Half-Past Two and Piano ”
Get high-quality paper
Helping students since 2015
Stay Safe, Stay Original