David Herbert Richard Lawrence, known as D.H.Lawrence (September 11, 1885 ” March 2, 1930) was born in the small mining town of Eastwood near Nottingham in the English Midlands. He began his career as an Edwardian novelist. He was an important and controversial English writer of the twentieth century, and one of the most important writers in English Modernism. Lawrence was a prolific artist, with his output spanning novels, short stories, poems, plays, essays, travel books, paintings, translations, literary criticism and personal letters.

Realism was the main feature of Lawrence’s writings, but later, he shifted to Modernism.

Don't use plagiarized sources. Get your custom essay on
“ Biography of David Herbert Lawrence ”
Get custom paper
NEW! smart matching with writer

He enthusiastically believed that it was his duty, as a writer, to present all the facts of life, and leave no aspect of reality hidden or darkened. As a result, he pushed the limits of taste, of what was acceptable in literary fiction; but he also expanded the boundaries of art. He focused on extending the scope of abstract topics. In particular, he incorporated Freudian psychoanalysis, frank descriptions of sexuality, and mystical religious themes into his works that were quite shocking to the audiences of his time.

He was the fourth child of a very poor family. His father, Arthur John Lawrence, was an illiterate coal miner. His mother, Lydia Lawrence, a former teacher, was from a middle-class family. She was educated, refined and pious.In the summer of 1901, Lawrence took a job as a factory clerk for a Nottingham surgical appliances manufacturer called Haywoods. However, that autumn, his older brother William suddenly fell ill and died, and in his grief, Lawrence also came down with a bad case of pneumonia.

After recovering, he began working as a student teacher at the British School in Eastwood, where he met a young woman named Jessie Chambers, who became his close friend and intellectual companion. He cared for her very deeply, but he did not feel any attraction for her.

Jessie Chambers is the “Miriam” of Sons and Lovers. Then, he ended his engagement with Jessie and began another one with Louie Burrows to whom his sister, Ada, introduced Lawrence: all three of them were trained to be teachers at the same school.He then moved to London to undertake a teaching job in Croydon. He began writing poems, short stories and completed his first novel The White Peacock in 1910, and published it in 1911. A year later, Lawrence published his second novel, The Trespasser, a story based on the experiences of a fellow teacher who had an affair with a married man who then committed suicide. However, in the spring of 1912, Lawrence’s life suddenly changed. He fell in love with Frieda Von Richthofen, a woman who left her husband and her three children to flee with him to Germany and then to Italy. Lawrence continued to write at a furious pace. He published his first play, The Daughter-in-Law, in 1912. A year later, he published his first volume of poetry: Love Poems and Others. Later in 1913, Lawrence published his third novel, Sons and Lovers, a highly autobiographical story of a young man and aspiring artist named Paul Morel.

After the marriage of Lawrence with Frieda on July 13, 1914, he published a highly regarded short-story collection, The Prussian Officer, and in 1915 he wrote another novel, The Rainbow, which was quite sexually explicit for the time.Feeling betrayed by his country but unable to travel abroad because of World War I, Lawrence retreated to Cornwall at the far southwestern edge of Great Britain. However, the local government considered the presence of a controversial writer and his German wife so near the coast to be a wartime security threat, and it banished him from Cornwall in 1917. Lawrence spent the next two years moving among friends’ apartments. However, despite the tumult of the period, Lawrence managed to publish four volumes of poetry between 1916 and 1919: Amores (1916), Look! We Have Come Through! (1919), New Poems (1918) and Bay: A Book of Poems (1919).

After the end of the First World War, Lawrence once again left England for Italy. There, he spent two highly enjoyable years traveling and writing. He completed and published his two greatest novels, The Rainbow and Women in Love, in 1915 and 1920 respectively. He also edited a series of short stories that he had written during the war, which were published under the title My England and Other Stories in 1922.

Having fallen ill with tuberculosis, Lawrence returned to Italy in 1927. There, in his last great creative burst, he wrote Lady Chatterley’s Lover, his best-known and most infamous novel published in Italy in 1928.Increasingly hobbled by his tuberculosis, Lawrence wrote very little near the end of his life. His final works were a critique of Western religion titled Apocalypse and Last Poems, both of which were published in 1930. Lawrence was a gifted poet, painter and novelist, although some of his works may be considered pornographic. Editors cut out highly sexually-charged scenes in Sons and Lovers. In 1929, some of his paintings in the Warren Gallery in London were seized because they were too obscene. His linguistic precision, mastery of a wide range of subject matters and genres, psychological complexity and exploration of female sexuality distinguish him as one of the most refined and revolutionary English writers of the early twentieth century.After a deterioration of his health, Lawrence died in the south of France, on March 2, 1930, at the age of 45. 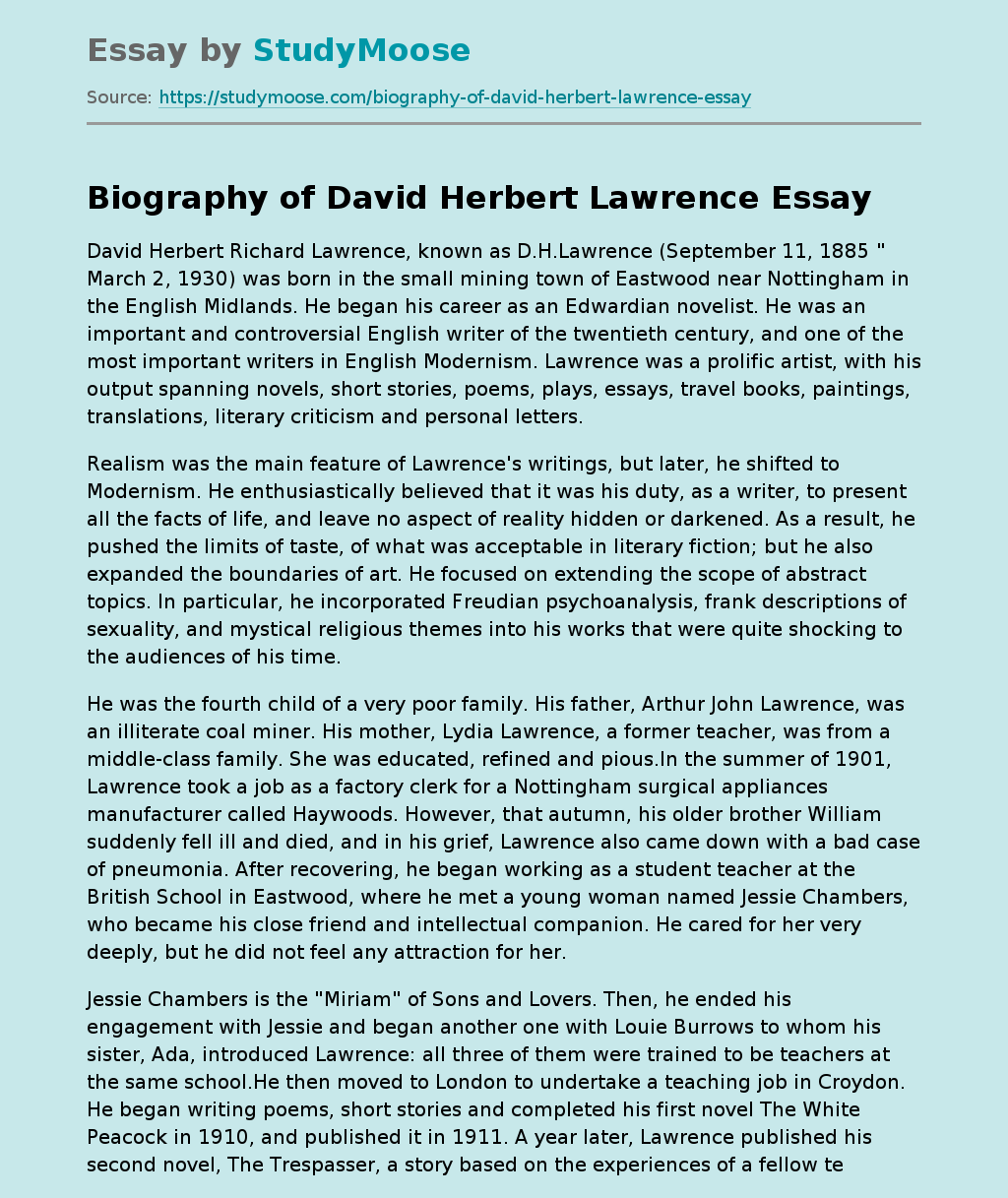