Women and Power in Shakespeare's Macbeth

Lady Macbeth throughout the play Macbeth changes from an influential wife of Macbeth to an uninvolved accessory. After the murder of Duncan, Lady Macbeth’s mental state deteriorates and she becomes paranoid. Lady Macbeth changes from a powerful female role into a weak character with little to no influence on her own actions and those of Macbeth. Changing from a malevolent and power-hungry to a character that is pitied for there shortcomings becomes as a person. She becomes so overwhelmed with guilt and self-doubt that she kills herself.

Don't use plagiarized sources. Get your custom essay on
“ Women and Power in Shakespeare’s Macbeth ”
Get custom paper
NEW! smart matching with writer

Macbeth most likely would not have killed Duncan if it was not for Lady Macbeth berating of Macbeth’s personality. Though she deserves some empathy for she didn’t physically commit any murders, her apparent role as a villain is visible in this play for she was the direct cause of the mental chaos of both her and Macbeth following Duncan’s murder.

Lady Macbeth is to blame for the Murder of Duncan and her personality change, even though Macbeth was the one that physically ended Duncan’s life.

Macbeth sends a letter in Act 1 informing Lady Macbeth about the prophesies, the purpose of this was not only to keep his wife informed but also to allow her to take her own actions on this information. In the letter he doesn’t mention killing the king he merely says “these weird sisters saluted me, and referred me to the coming on of time with ‘Hail, king that shalt be!’” He just informs her that witches gave him a prophesy.

This information is then used to form a murder plot which she forms independently. Lady Macbeth even recognizes for herself that she is corrupted saying that Macbeth has to much kindness, this portrays herself as someone filled with the ruthlessness needed to carry out a murder. She even tells Macbeth what he ‘wants’ “Which fate and metaphysical aid doth seem To have thee crowned withal.”

However, when he protests before the murder saying that “I have no spur To prick the sides of my intent, but only Vaulting ambition, which overleaps itself And falls on th’ other.” Macbeth no longer wants to commit the murder and kill the innocent king, and wouldn’t have if Lady Macbeth didn’t exploit his loyalty to her. Not does she berate his manhood but she also, claims that he is not loyal to their marriage if he doesn’t commit the murder. Sullying the motherly image of a woman breastfeeding her child in order to become an example not only of giving up but something she cares deeply about but also obliterating it for the sake of loyalty, This finally makes Macbeth do what she wants, as he kills the king in his sleep. is . Macbeth begins to become paranoid directly after the murder and rather than comforting him Lady Macbeth tries to dismiss him saying “My hands are of your color, but I shame To wear a heart so white. ”. This leads to the embarrassment of Macbeth and the destruction there marriage for after, Macbeth no longer confides all his thoughts in his wife. During Banquo murder and his hallucinations of Banqo’s ghost, he leaves his Lady uninformed and it of control. Lady Macbeth’s overbearing behavior and manipulation during and before the murder of Duncan murders causes a disconnect in their marriage which is detrimental to the rest of the plot and the loss of her immense confidence which she had before the murder.

After Duncan’s murder, the grand villain Lady Macbeth becomes a shrivel of her old self leaving the audience to pity and show empathy for the once-great malefactor. In Act 3 her loss of power over her husband is apparent. Before this Macbeth commits murder for her sake and now he won’t even have the courtesy to inform her on the murder plan of Banqo. She says “what’s to be done” he responds to her saying that not knowing is better to her. By leaving her out we see that her husband no longer listens to her. She even tells him to let go of these thoughts before inquiring about Banquo’s murder, he ignores this as well saying “Oh, full of scorpions is my mind, dear wife! Thou know’st that Banquo, and his Fleance, lives.” Macbeth ignoring his wife takes a toll on her ego she becomes shakier and shakier and loses control of Macbeth again when he hallucinates Banquo’s ghost. She again appears in Act 5 overwhelmed with guilt and troubled with insomnia, sleepwalking, and talking. After the murder of Duncan she says “A little water clears us of this deed.”

However Shakespeare plays upon the symbolism of water and its purity, and blood and the guilt it represents again during Lady Macbeth’s sleepwalking. She contradicts herself for she is washing her hands if ‘blood’ with water but the blood won’t come out she says “Out, damned spot! Out, I say!”. The water will never purify her guilt and shortly after we see this for she kills herself. The reader must empathize with her, though she commits villainous actions no character or person is purely good or purely evil. The motif of the play is that “Fair is Foul and foul is fair”, everything is not always as it seems things that are bad are also good and vice versa. Shakespeare cleverly echoes this throughout the play especially in Lady Macbeth’s character for she appears to have manipulated Macbeth but may have had some good intentions. Therefore, when she dies the reader can see that though a villain she is also partly a victim for her role after Duncan’s murder becomes minute then obsolete, the plot of the story and downfall of Macbeth continues even after her death.

Women and Power in Shakespeare's Macbeth. (2020, Sep 23). Retrieved from https://studymoose.com/women-and-power-in-shakespeares-macbeth-essay 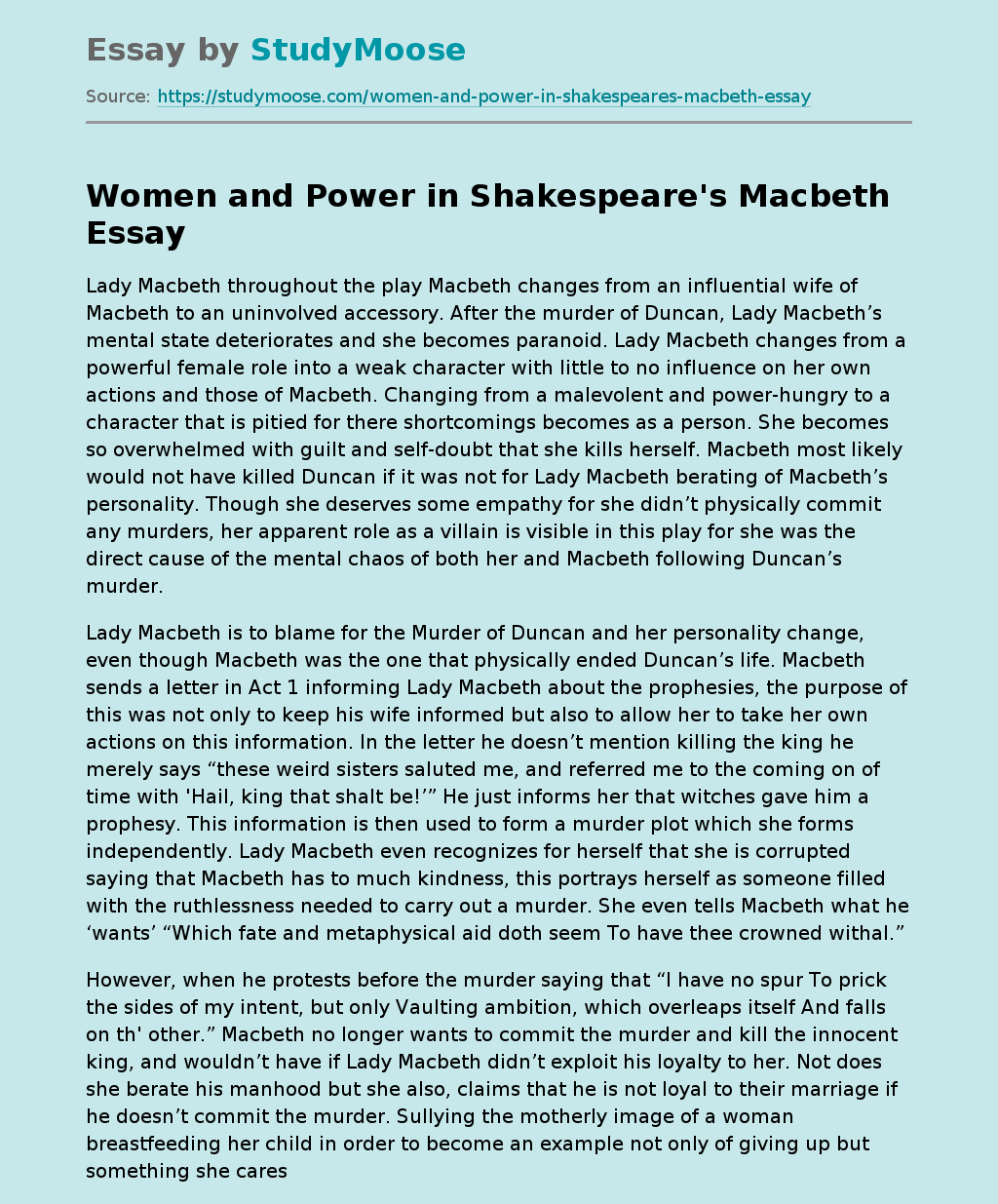