The play Macbeth, by William Shakespeare, is a tragedy about a Scottish lord, Macbeth, who becomes too ambitious. He starts off as a brave, loyal and noble man, but his ambition and thirst for power lead him onto a path of ruthlessness and self-destruction, and ultimately his own death. While Macbeth is manipulated by various people and occurrences, the main ones being the witches, Lady Macbeth and Fate, one theme that remains constant throughout the play is the power of choice.

Don't use plagiarized sources. Get your custom essay on
“ Macbeth as tragic hero ”
Get custom paper
NEW! smart matching with writer

Macbeth does have the ability to choose, and it is this ability that makes him a tragic hero, not a victim.

There are certain characteristics that someone must have in order to be considered a full tragic hero. One of the main ones is that the character must have a fatal flaw. In Macbeth’s case, it is his ‘vaulting ambition’ (1:VII:27). Ambition can be a good thing, but when in large doses as Macbeth’s was, it can be dangerous, and, as Macbeth proved, even fatal.

Another important characteristic of a tragic hero is the conflict between good and evil, and the choice between these two things. Macbeth consciously chooses evil over good. A victim, on the other hand, has no power over what happens to them. Macbeth did have some control over the situation, which means that he was not a victim.

However, Macbeth himself can’t be entirely to blame. He was influenced and manipulated, particularly by the witches. If the three ‘Weird Sisters’ (1:V:7) had not said anything to Macbeth in the first place then none of it would have happened.

The ‘Weird Sisters’ put the idea of becoming ‘king hereafter’ (1:III:49) into Macbeth’s head, and, consequently, the idea of murdering King Duncan. The witches knew that this would happen, they wanted it to happen. They also manipulated Macbeth later on in the play, with the three apparitions. They gave him false confidence, and, once again, they knew and wanted this to happen. They created ‘toil and trouble’ (1:IV:10), and they created it on purpose, to lead Macbeth to his demise. However, Banquo was also present at the first meeting with the ‘Weird Sisters’, and they made a prophesy for him, too. But Banquo chooses to ignore what they say. Macbeth could have made this choice as well, but he didn’t. Although the witches did manipulate Macbeth, he wanted to believe their prophesies, and he chose to believe them.

Another person who was a big influence on Macbeth was his wife, Lady Macbeth. He was going to let ‘chance crown me king’ (1:III:43), but Lady Macbeth knew that this wouldn’t lead to anything. She also knew that Macbeth’s sense of loyalty and honour could stop him from killing Duncan and therefore becoming king and fulfilling his ambitions. She urges him to ‘look like the innocent flower, but be the serpent under’t’ (1:V:63-64). She also questions Macbeth’s manliness, another weak spot of his. She knows that he doesn’t like her doing this, and she knows that it’s a good way of persuading Macbeth to do what she wants him to do – that it’s a good way of manipulating him. But Macbeth wanted to be manipulated. He let his wife influence him. If he really didn’t want to murder Duncan then he wouldn’t have. Even before he spoke to Lady Macbeth he was having ‘horrible imaginings’ (1:III:37). Even though Lady Macbeth helped turn these into realities, she did not physically force her husband to commit murder. Once again, Macbeth had the freedom, power and ability to choose.

Another important role in the Macbeth is the role of Fate and destiny. Being a tragic hero, Macbeth was destined to die from the beginning. It could have even been Fate that Macbeth made the wrong choices. However Fate can’t manipulate, Fate just is. Macbeth says that he is going to leave everything up to chance, but he doesn’t. He chose not to. Perhaps this was also due to Fate, but what would have happened if Macbeth had chosen not to kill Duncan? This is another thing that makes Macbeth a tragic hero – the audience is left feeling sympathetic about what might have been. No matter how manipulated, everybody has the power of free will. The fact is that Macbeth chose his path himself, and although Fate may have played some part in his downfall, the power of choice played and even bigger part. The ability to choose overrides Fate and destiny.

The entire play could just be put down to human nature. Greed, power, ambition; greed for power and ambition is a part of human nature. However human nature is a bit like Fate, in that it cannot manipulate, it just is. Nearly everyone would like to believe that they can be great, and if they are told so would want to believe it. Macbeth just takes it one step further by making it happen. In a way Macbeth is taking Fate into his own hands. His ‘vaulting ambition’ drives him to do this. It is Macbeth’s ambition that leads him to murder people, as well as leading to his own death. His ambition ultimately becomes his nemesis, which makes him a full tragic hero.

Macbeth’s ambition and his greed for power is like a fire. The witches, Lady Macbeth and Fate did manipulate him and add fuel to the fire, but the spark had to be there first in order for them to do this. Although Macbeth was influenced and manipulated a great deal, he still had the power and the freedom to choose. It is the choices he made that make Macbeth not a victim, but a full tragic hero. 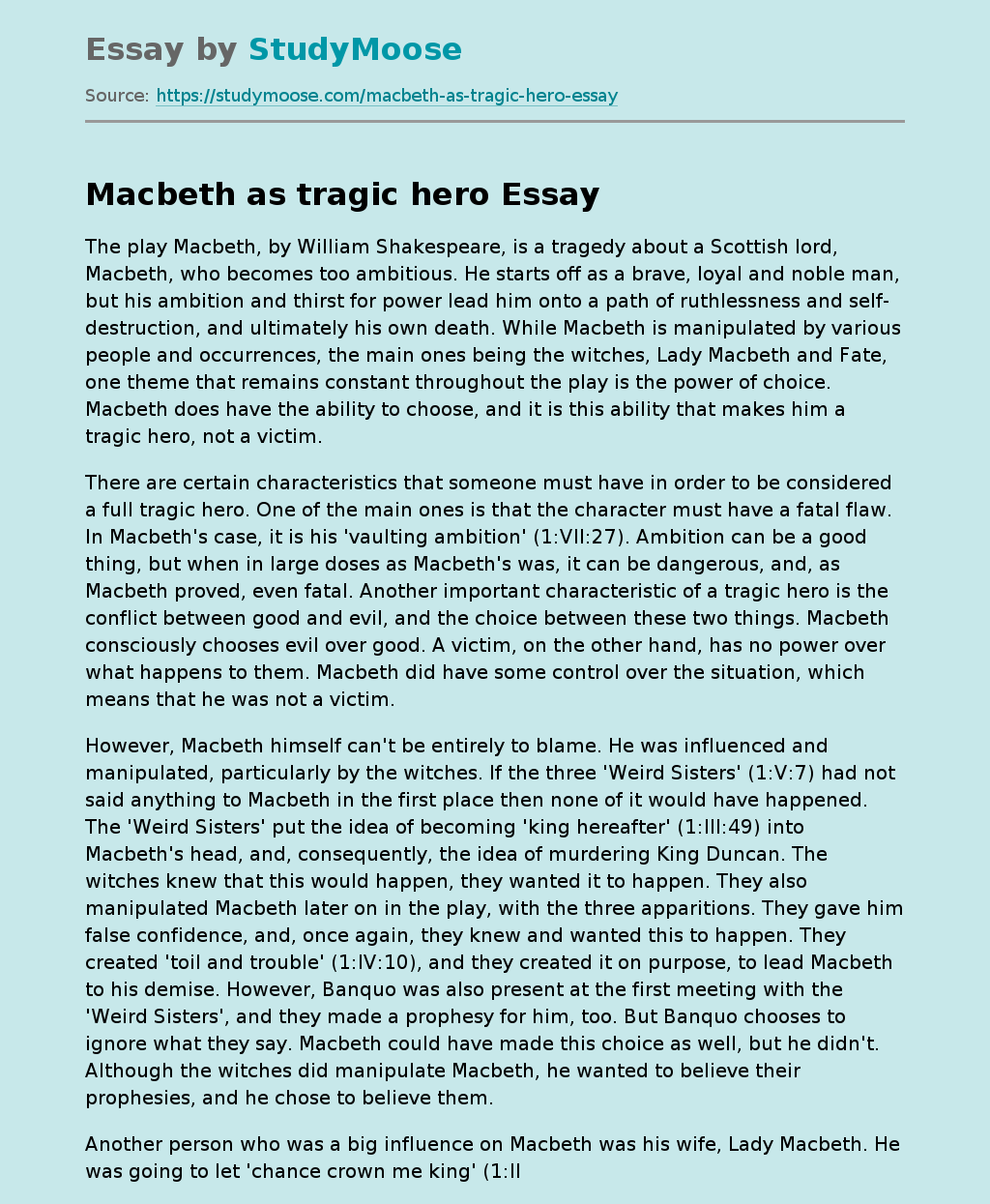