Wiz Khalifa Cameron Jibril Thomaz, better known by the stage name Wiz Khalifa, is an American rapper based in Pittsburgh, Pennsylvania. Khalifa was born on September 8, 1987 in Minot, North Dakota to a mother and a father serving in the military. His parents divorced when Khalifa was about three years old. His parents’ military service caused him to move on a regular basis. Khalifa lived in Germany, England, and Japan before settling in Pittsburgh where he attended Taylor Allderdice High School.

His stage name is derived from khalifa, an Arabic word meaning “successor”, and wisdom, which was shortened to Wiz when Khalifa was fifteen.

He got his stage name tattooed on his 17th birthday. He includes Camp Lo, The Notorious B. I. G. and Bone Thugs-n-Harmony among his influences. Khalifa released his first mixtape, Prince of the City: Welcome to Pistolvania, in 2005. The mixtape led to his first full length album entitled Show and Prove in 2006. Khalifa was declared an “artist to watch” that year in Rolling Stone magazine.

Records and released two mixtapes through Rostrum Records: Grow Season, hosted by DJ Green Lantern and released on July 4, 2007, and Prince of the City 2, released on November 20, 2007. His debut Warner Bros. single “Say Yeah” reached number 25 on the Billboard Rhythmic Top 40 music chart and number 20 on Billboard’s Hot Rap Tracks. The song samples “Better Off Alone” by Alice Deejay. Khalifa’s vocals from “Say Yeah” appear near the end of Pittsburgh mash up producer Girl Talk’s 2008 album, Feed the Animals, over music from Underworld’s “Born Slippy”, Usher’s “Love in This Club”, and the Cure’s “In Between Days”.

Khalifa appeared with The Game, David Banner and Play-n-Skillz at U92? s Summer Jam at the USANA Amphitheatre in West Valley City, Utah on August 2, 2008. Khalifa released the mixtapes Star Power in September 2008, and Flight School in April 2009 on Rostrum Records. Khalifa parted ways with Warner Bros. Records in July 2009 after numerous delays in releasing his planned debut album for the label, First Flight. Khalifa appeared with Girl Talk, Modey Lemon, Donora, Grand Buffet, and Don Caballero at the Amphitheatre at Station Square in Pittsburgh on July 31, 2009, where he announced that his relationship with Warner Bros. as over. Wiz Khalifa performing at Columbia University in New York City in April 2010. Continuing his association with Rostrum Records, Khalifa released the single “Teach U to Fly”, and the mixtape How Fly, a collaboration with New Orleans rapper Currency, on August 9, 2009. Khalifa introduced a more melodic style on the mixtape, alternating between singing and rapping. He opened for Wu-Tang Clan member U-God at the 2009 CMJ Music Marathon in New York City.

Khalifa released the mixtape Burn After Rolling on November 2, 2009, where he raps over familiar beats from other artists, including the songs “If I Were A Boy” and “Diva” by Beyonce, “Walking on a Dream” by Empire of the Sun, “Luchini AKA This Is It” by Camp Lo, and “Best I Ever Had” by Drake. Khalifa released his second album, Deal or No Deal, on November 24, 2009. Khalifa performed at Emo’s in Austin, Texas in March 2010 as part of the 2010 South by Southwest Music Festival. He appeared on the cover of XXL magazine that same month, for the magazine’s annual list of Top 10 Freshman, which included Donnis, J.

Cole, Pill, Freddie Gibbs, and Fashawn. Wiz Khalifa was named 2010 “Rookie Of The Year” by “The Source”, with alongside Rick Ross, “The Man Of The Year”. He toured with rapper Yelawolf on a 20-date tour, the Deal Or No Deal Tour. Khalifa released the free mixtape Kush and Orange Juice for download on April 14, 2010. Due to Khalifa’s devoted grassroots fan base, the mixtape became the No. 1 trending topic on Twitter with the hash tag #kushandorangejuice, and “Kush and Orange Juice download” ranked No. 1 on Google’s hot search trends.

Citing music industry insiders, New York magazine wrote that Khalifa signed with Atlantic Records in April 2010, although the rapper didn’t confirm it. He stated to AllHipHop in June 2010 that he was working on a new album, but was weighing his options and hadn’t yet decided on a label to distribute it. Khalifa confirmed to MTV on July 30 that he was signing an Atlantic Records deal. Wiz Khalifa on stage in Boston in August 2010. Khalifa was featured in a remix and video for the 2010 Rick Ross single “Super High”, alongside Currency.

He guested on the mixtape Grey Goose, Head Phones, and Thirsty Women by St. Louis rapper M. C, and was featured on the track “The Breeze (Cool)” on rapper Wale’s August 2010 mixtape More About Nothing. Khalifa was named MTV’s Hottest Breakthrough MC of 2010, winning with nearly 70,000 votes, and beating out finalists Nicki Minaj, J. Cole, Travis Porter, and Diggy Simmons. Khalifa appeared at the Soundset 2010 festival in May 2010 in Minneapolis, Minnesota, alongside Method Man & Redman, Del the Funky Homosapien and Hieroglyphics, Atmosphere, Murs, Cage, and others.

He also performed at the 2010 Rock the Bells festival, along with hip hop veterans Wu-Tang Clan, Snoop Dogg, Lauryn Hill, A Tribe Called Quest, Rakim, KRS-One, Jedi Mind Tricks and Slick Rick. Khalifa declined an invitation to tour with rapper Drake and launched his own “Waken Baken” tour, a 50-city national tour with rapper Yelawolf. The tour, scheduled to last from September to November 2010, as of October, sold out every venue. On November 2010, during his “Waken Baken” tour at East Carolina University, Wiz Khalifa was arrested for possession and trafficking of marijuana.

He was then released the next morning after a $300K bail, and is looking to resume with his tour. Khalifa performed in a cypher during the 2010 BET Hip-Hop Awards. He recited his verse from the song, “The Check Point”, from his mixtape with Currency, How Fly. Khalifa released “Black and Yellow”, his first single for Rostrum/Atlantic, produced by Stargate, which has received radio airplay. The single was peaked at number 1 on the Billboard Hot 100; the title of the song refers to the colours of the Pittsburgh Steelers. Khalifa will release his debut album with Atlantic Records in 2011.

He appeared with Currency on the track “Scaling the Building” on producer Ski Beatz’ 2010 album, 24 Hour Karate School. Khalifa’s fanbase is known as the Taylor Gang, named after his love of Chuck Taylor All-Stars shoes. Legal troubles, after a performance at East Carolina University on November 9, 2010, Khalifa was arrested after ECU police detected “a strong odor of marijuana emanating from the tour bus and the backstage area of the auditorium. ” After searching Khalifa’s tour bus, authorities found 60 grams (2. 1 ounces) of marijuana.

Khalifa was arrested and charged with marijuana trafficking, a felony count of maintaining a dwelling/vehicle/place for sale or storage of marijuana, and one misdemeanor charge of possession of drug paraphernalia. Khalifa was later released after posting a $300,000 bond, after which he resumed his Waken Baken Tour 2010. He then signed with Atlantic Records. He is also well-known for his debut single for Atlantic, “Black and Yellow”, which peaked at number 1 on the Billboard Hot 100. His debut album for the label, Rolling Papers, was released on March 29, 2011. 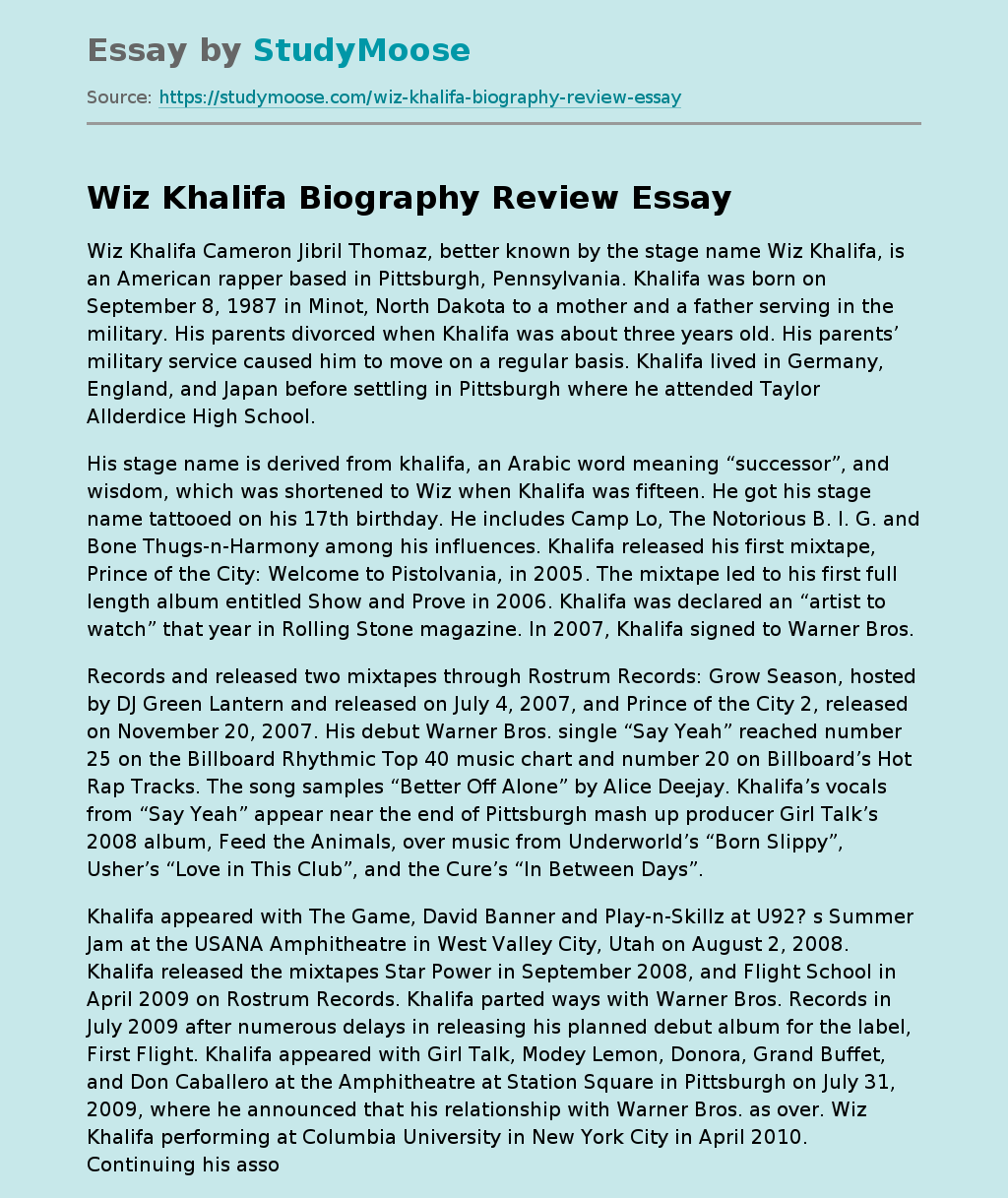