Arthur Miller’s “Death of a Salesman” puts the titular salesman, Willy Loman, at odds against his own psychological decline due to the pressures of society and his own personal failures as a salesman. Willy’s vision of the American Dream, that any man can be successful through sheer charisma and personality, failed him. Now, he has no way to provide for his family and has developed suicidal tendencies.

Willy’s blind faith in his unrealistic version of the American Dream leads to this mental decline and blurs his perception of reality.

Willy Loman’s entire existence was dedicated to providing for his family with his job as a salesman, something he was never very good at. At the time in which the play is set, Willy is well past the peak of his career, and all of his old clients and friends have either passed away or retired. He has virtually no means of income, and can barely feed his family.

This inability to provide for his family is Willy’s ultimate failure, and culminates with him committing suicide in order to provide his sons with the financial stability to pursue a career in sales. Willy’s sees the American Dream as the ability to be prosperous merely through charisma and being well-liked. This is proven when Biff tells his father about him making fun of a teacher with a “lithp,” and Willy does not scold him, but asks him how his classmates reacted.

This implies to the reader that Willy values his sons’ popularity over morals or politeness.

Despite his popularity in school, Biff ends up being a failure, just like his father. When Willy attempts to use his personality to ask his boss for a raise, he gets fired, proving his perception of the American Dream to be a flawed one. As an archetype, Willy Loman can be seen both as a tragic hero and as an everyman. He has everything that a man could ever want: a car, a house, a supportive wife, and two sons whom he adores.

However happy his situation may seem at first glance, his life falls apart towards the end of the play, a veritable fall from grace. No matter how hard Willy tries to just let go of his dream, even when it is tearing his life and his sanity apart, he simply cannot let go. The product that Willy sells is never specifically mentioned, leaving the reader to make a personal connection with him, imagining that Willy may be in the same line of business as the reader, and therefore relatable to the common man. Death of a Salesman” is still a powerful drama, more than half a century after it was written. After World War II, Americans faced profound tensions and contradictions.

Authors and playwrights faced these cultural issues with works like Arthur Miller’s “Death of a Salesman. ” Influenced by existentialist philosophy, Miller created a play that challenged America’s idealistic notions of success. By creating the relatable character of Willy Loman, Miller struck a deep chord with the American people that still stands strong today. 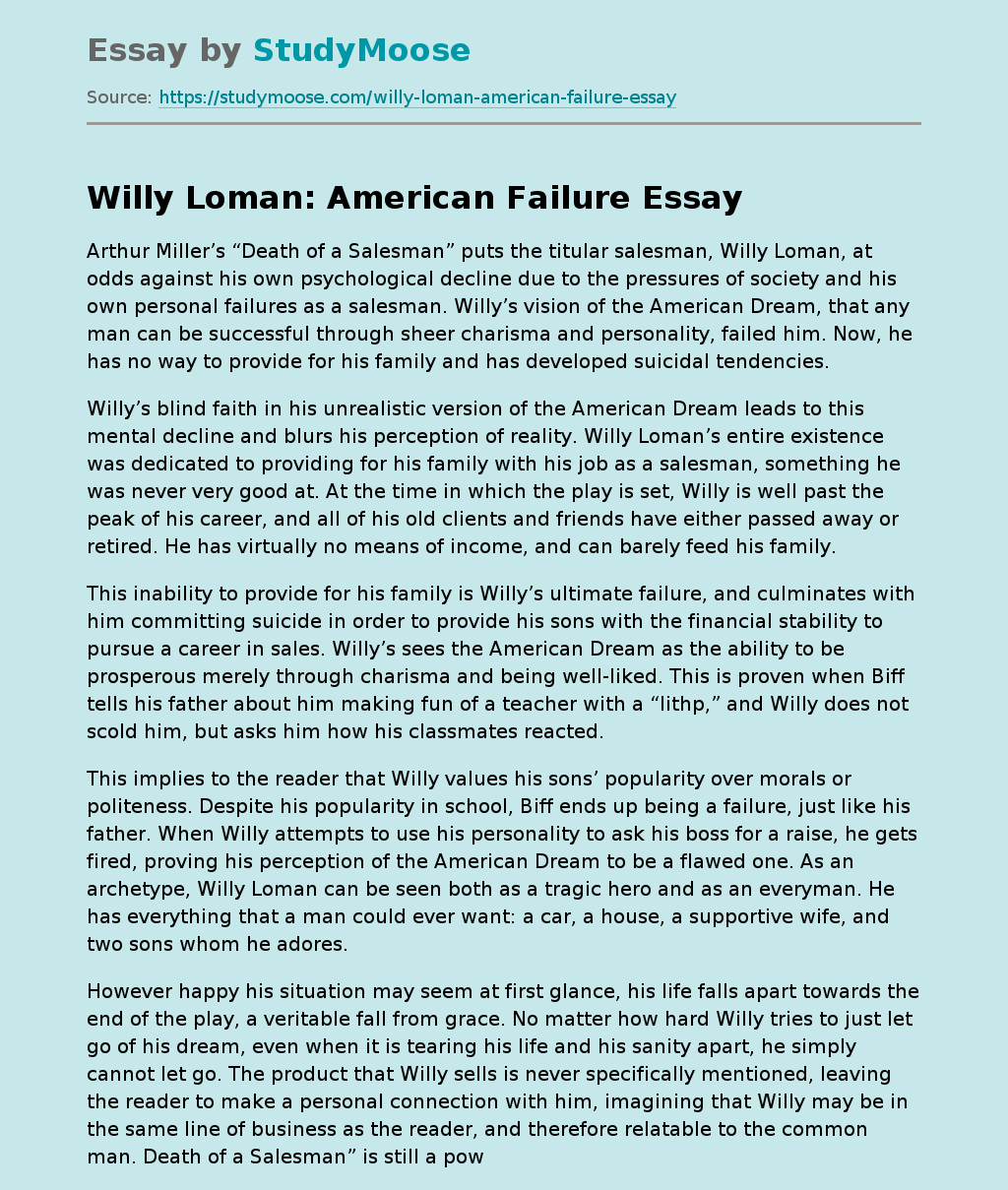