The poem Wild Bees by James K. Baxter is a descriptive poem about a place in the southern hemisphere in January when it is summer. Specifically when the speaker and his friends steal honey from by burning a beehive. Baxter presents a speaker who appears to be engaged in observing the bees, and is fascinated by the natural instincts of the bees especially their preparations for winter. The speaker also compares himself to the Romans in Carthage and the Greeks in Troy, where the fires created killed many people, when depicting the flaming of the beehive that destroys half of the honey which can be seen as a protest against violence.

Turn in your highest-quality paper
Get a qualified writer to help you with
“ Wild Bees by James K. Baxter ”
Get high-quality paper
NEW! AI matching with writer

The narrative is in first person and it is clear that the poet himself is the speaker as it refers back to a memory. The poet seems to prefer nature rather than materialistic items, as he points out “loss [honey] is a precious stone to me” (28), alluding to the honey which is lost in the fire.

He also refers to honey as “their[bees’] gold” (24) as it is as important and valued as gold to them. Moreover the poet recognizes that “Tragedy is written distinct and small” (26), although his friends who went to smoke the hive would not have been as sensitive or reflective. However, the speaker does take part in the burning of the hive in the poem, which may be a sign that his remorse came afterwards. Also the poem is written in the past tense suggesting that the thoughts in the poem are of those that at the time of writing it.

Rhyme and rhythm are important in differentiating the general introduction to the poem and the main story. There is a rhyme scheme which is fairly consistent; the second line and last line of each stanza rhyme, with the exception of the first stanza where the third line rhymes instead of the second line. There is also a caesura in the first stanza, which effectively separates it into two parts. The poem begins by “Often in summer” (1) which misleads the reader into believing that the poem is going to discuss a pleasant memory of the poet’s past. Although the imagery of a “safe Ophelia drifting” (2) foreshadows its actual contents, the poem does not reveal itself until the second stanza as the poem focuses on “one half-cloudy evening of ripe January” when they destroyed the beehive with a fire.

There is also a contrast of tranquillity and action throughout the poem. The first stanza has an interested tone for the bees. The poet describes them as “swift as tigers”, a simile that reveals his admiration. However, through the second stanza to the fourth, the tone is dramatic. This is illustrated by the imagery the poet uses, such as “masked to the eyes like plundering desperadoes” (9) and “wounded sky” (12), which gives a foreboding sense of warfare. Moreover the poet says that the “hive woke” (16), personifying the whole hive to establish the activity of all of the bees. However, the overall mood of the poem is melancholy, as the poem is a recount and analysis of a memory. Furthermore the poet uses the whole last stanza to ponder upon the bees.

The poet introduces the bees as he sees them engaged in “passionless industry” (5) of collecting honey. It is passionless since they are doing this without any emotion or incentive except to obtain food. The poet substitutes ‘honey’ with a kenning, “a nectar Distilled in time” (28), to emphasize that the honey is stored for winter, as it is a time where food is scarce with no flowers to gather nectar from.

This response to nature, of storing food, can be seen as a part of the bees “instinctive wisdom” (25), which the poet greatly admires. They are also aggressive when it comes to defending their hive from invaders, since they will not survive without the honey, This is illustrated when the hive is already on fire “yet still their suicidal live raiders dived and clung to our hands and hair” (17-18). The bees are also personified as soldiers in “suicidal Live raiders” (18-19) who are determined to not give up without a fight and make as much damage as possible to their enemies, even though it cost their lives.

However, the poet seems to speak against violence. The situation is compared to the battles in Carthage and Troy, ancient cities which were burnt down by the Romans and Greeks respectively, which resulted in their victory. However, thousands were killed and the two cities were destroyed. The comparison lets the reader see the damage done in a scale that is understandable, as the loss of half the honey is not significant enough to present that violence is not worth what it ruins. The quote “A job well botched” (21) and “Little enough their gold, and slight our joy” (24) expresses that the outcome was not as fully appreciated and that more honey should have been left. The speaker and his friends need not have burnt the hive, but instead wear some protective material and take the honey, not destroying the beehive. Violence can thus be seen as a way of losing for both parties involved.

In conclusion, the poet tells the reader many things. The beauty of nature is emphasized by the imagery created by the poet whilst the disapproval of violence by comparison to history. The poet concludes his poem by “preaching the truth of winter To the fallen heart that does not cease to fall.” (29-30), revealing that the bees must still prepare for winter even though their hive is burnt down. However winter recurs every year, and thus the preparations never stop, which creates a feeling of eternity of nature, even after we are gone. 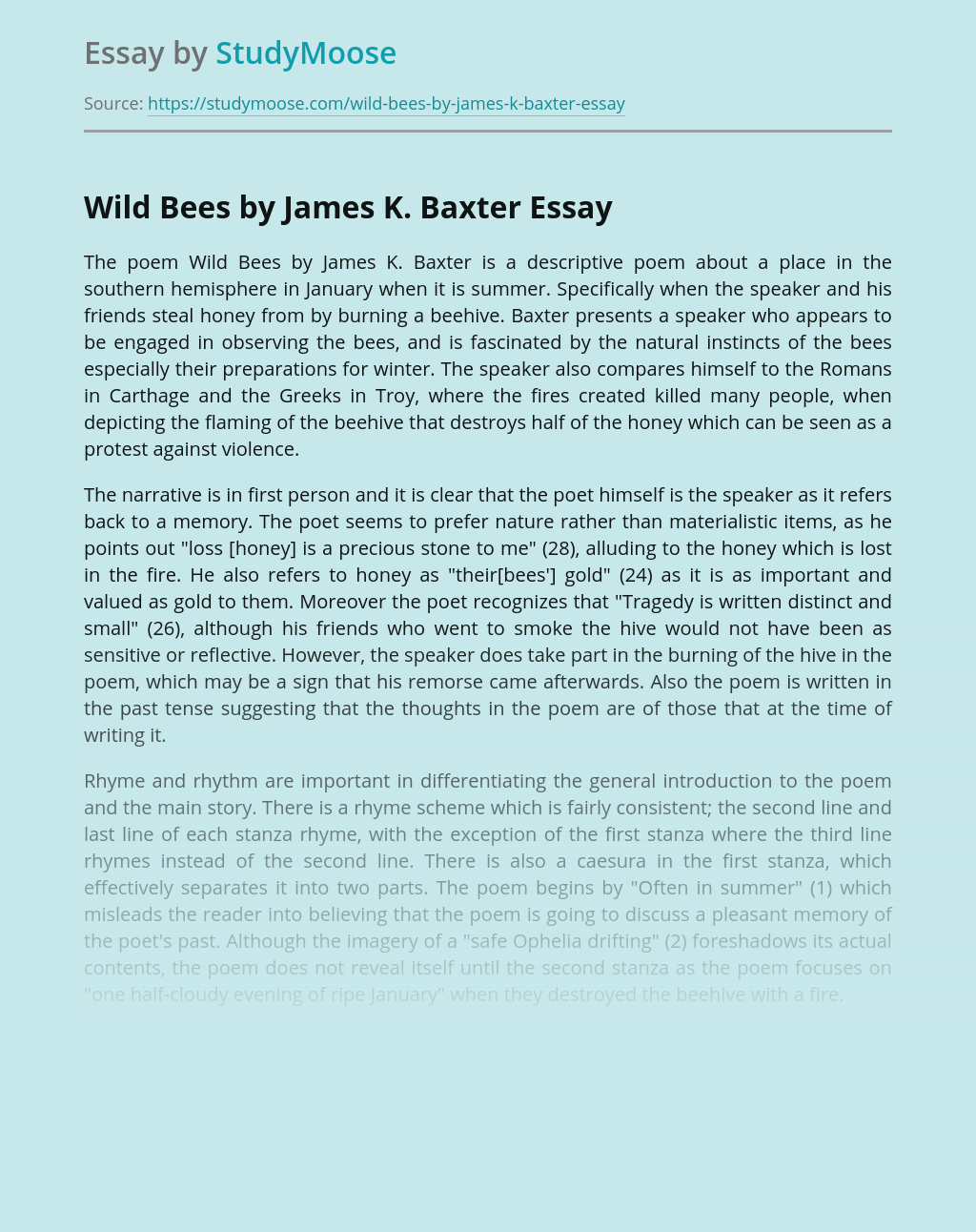 Turn in your highest-quality paper
Get a qualified writer to help you with
“ Wild Bees by James K. Baxter ”
Get high-quality paper
Helping students since 2015
Stay Safe, Stay Original