Role: Management The maximum possible score within the system is 100, given that the Local 190 agrees to all changes presented by the management.

2. Group inventive system (maximum points: 25)
a. Maintain current incentive structure at 60% of base pay in incentive payments 0 b.

Turn in your highest-quality paper
Get a qualified writer to help you with
“ Scoring System for Adam Baxter Company Negotiation ”
Get high-quality paper
NEW! AI matching with writer

Reduce wage adjustment to only 30% of CPI 7.5 e. Stop the automatic increase in wages completely 10

4. Location of the new plant (maximum points : 20)
a. Keep the headquarters in Deloitte and locate plant outside of Deloitte 20 b. Keep current headquarters as well as plant within Deloitte + no strike pledge 0

*NOTE:Here we have to consider what would happen with the current employees if the plant is relocated outside of Deloitte.

*NOTE: given that the benefits are a norm within the industry we will not negotiate these term. Our focus will be on base pay as well as pay program. From the case each employee sometimes earn up to $21.38. In our case, option b results in maximum compensation of: $18.38, c: results in $18.17, option d:$16.96, option e: $14.759 and option f in only $14.69. This fully depends on how much risk we would want to transfer to the employees by having a portion of their pay vary In terms of the weights of the scoring system, the main issue for the management here is related to the: worker autonomy and target production levels in the new plant. This is given a weights of 30% of the total points achievable. Group inventive systems 25%, and location of the new plant 20%, Wages and benefits 15% and the escalation clause 10%. The escalation clause was given a lower rating mainly because inflation although it is estimated to be high within Deloitte, the overall material impact is not as much as the other variables.

With regards to the target price we would aim to achieve 100% of the points available within our scoring system although there may be other factors that we have to consider from the managements team such as hiring new employees if we decided to open a new plant outside of Deloitte. This will give use some negotiation room. Reservation price should be at 58.5 or 56 points:

1. Worker autonomy and target production levels in new plant: 20 points. Given that new plant is being constructed it should have the capacity for higher production and this should be taken advantage of. Here the management team needs to push for increased efficiency within the eight hour shifts of the workers so that they do not have the incentive in going over time. This is necessary considering the higher capital expenditure that will be spent on the new plant. The main issue right now is that when the set targets are met the workers have the choice to take a break or take the rest of the day off, or if they decided to keep working they get overtime. These options should not be allowed given that the labour costs would fluctuate depending on whether the workers decide to work or not.

2. Group incentive system: 18 points. The current incentive structure pays the employees a high hourly base rate and then substantially more for any production beyond their minimal daily target. This leads to approximately 60% of base pay in incentive payments – current production targets are very relaxed. In this case we are striving for 20% in incentive pay of the current hourly base rate. Here we would have to highlight how workers would actually become demotivated diven the reduced compensation they would be receiving. In addition Baxter also has other locations that are running at acceptable production levels without the expense of these incentive systems, hecen a 20% incentive is a bonus in comparison to the other plants.

3. Escalator clause: 7.5 points or 2.5. The escalator clause increases the wages that the employees receive given the increased cost of living. Although this issue can get material over time, at the moment inflation generally rages at about 2%, considering an extreme case of 5-7%, this is still not as material as the other issues at hand. However employees should not rely on the company to have their wages adjusted to inflation, usually this is a government regulated initiative. In this case it would be acceptable to only factor in 30% of the CPI. LAstly we would be still ok if we were to maintain the current structure however defer the CPI adjustment until the new plant is operating at full capacity. This is an incentive system for the workers as well as if implemented it would drive revenues given that overall efficiency would be improved.

4. Location of the new plant: 0 points. Here we would have to strongly consider if we could relocate the plant given that we could hire new workforce under completely new agreements. The biggest disadvantage that we have currently is that the workers are being overpaid, and reducing their salary would affect their productivity. Thus despite the image that Baxter has created within Deloitte, it is important to know that by not relocating it will be very difficult to keep the current workers incentivised for the new plant while reducing their benefits and pay incentives. Having the plant relocated to a different town would reduce this issue. However we are assuming that this would be on of the biggest issues for Local 190 to go against and we are willing to locate the plant within Deloitte as long as our other terms are met.

5. Wages and benefits:13 points. The employees are currently getting paid $10.69 per hour, as well as incentive pay for production as well as annual bonuses on the company’s profitability. Although we understand that it is important to incentivise through a pay incentive based on production, we would be able to increase their base pay in order to reduce their pay for production incentive. On the workers end this would increase their stability as they would be able to exactly know how much they would earn. On the other hand however Baxter does need to implement more stringent rules with regards to meeting production quotas given that the employees are being compensated regardless. In this case we would be happy with a reduction in pay incentives on production levels of 90% and increase their base pay at $13.69 per hour, which results in an increase of 22%.

Negotiation: Adam Baxter Company Role: Baxter Management team What issues are most important to you? (list in order of importance)

What is your BATNA?
If Local 190 is not willing to agree to our terms of negotiation we have the alternative of building the plant outside of Deloitte. Considering that over 200 food processing companies have gone out of business because of the seasonality feature of the business the management is willing to do whatever it takes for the company to survive and potentially grow in the future.

Reservation Price?
With regards to the issues presented above, at a minimum scale, the management wants to achieve the following: Moderately reduce autonomy levels of the employees and increase production levels to at least 95% form the current 80%. Reduce incentive structure to a maximum of 20% of base pay in incentive payments Reduce wage adjustment to only 30% of CPI, or defer payment until the new plant is operating at full capacity Increase wages to ($13.69) and reduce other pay programs by 90%, maintain benefits We are willing to be located in Deloitte as long as we are able to agree on the above as well as receive a no strike pledge from Local 190

Keep the headquarters in Deloitte and locate plant outside of Deloitte Increase wages to ($14.69) and eliminate other pay programs , maintain benefits

It should be noted that within our target plan we would want to construct the plant outside of Deloitte would result in substantially lower costs given that we could form new employee. However this would mean that all employees would have to be replaced which would delay starting the new plant by at least 52 weeks given the prior notice that its required. We ourselves are not too keen on proceeding this way given that the towns prosperity has always entwined with Baxter’s profitability – however this can be used to our advantage as an alternative during the negotiation.

What are your sources of power?

Propose the possibility of developing the plant outside of Deloitte which could result in replacement of most of the current employees Even if the new plant was proposed within Deloitte, the company can lay off workers by giving them a 52 week notice, and potentially hire new workers with better negotiated terms that what is currently set up.

What issues are most important to your counterpart? (list in order of importance)

1. Location of the new plant – and what will happen with the current workers
2. Worker autonomy and target production levels
3. Wages and benefits
4. Group incentive system
5. Escalation clause

What is your counterpart’s BATNA? Reservation Price? Target?

1700 of the 2000 total employees are members of the Local 190. If they do not receive what they want they could simply go on strike which would jeopardize Baxters operations and impact its profitability considerably given that 75% of Baxter’s operations are produced in the Deloitte plant.

Local 190 target agreement:
Keep current headquarters as well as plant within Deloitte (without the no strike pledge) Maintain same level of autonomy/maintain production level at 80% Maintain same wage ($10.69) and same pay program and benefits Maintain current incentive structure at 60% of base pay in incentive payments Maintain the current automatically have wages adjusted to CPI

What are your counterpart’s sources of power?
Majority of the workers are under Local 190, they could start a strike. In 1940 Baxter and the Deloitte local union arranged a permanent “working agreement’ on base labour contract hence only added modifications can be made to the permanent working agreement. The company is still profitable even though they have a great employee working agreement in place hence no need to be more stringent What is your opening move / first strategy?

Overall both parties have had a mutually beneficial and long lasting relationship between each other. It is important for the management to achieve its desired agreement without starting a strike. Request a “No-Strike” pledge if the plant is located in Deloitte

Other important information / considerations
Baxter employs 25% of the population of Deloitte
There has never been a strike since the workforce Unionized in 1933; relations are good Approval: we negotiate, Baxter top management ratifies, Union votes for a majority (of 1700) 551 have already been laid-off

Even though Adam Baxter Company was a profitable and once a family run business, not the economic environment has changed and its becoming more competitive. 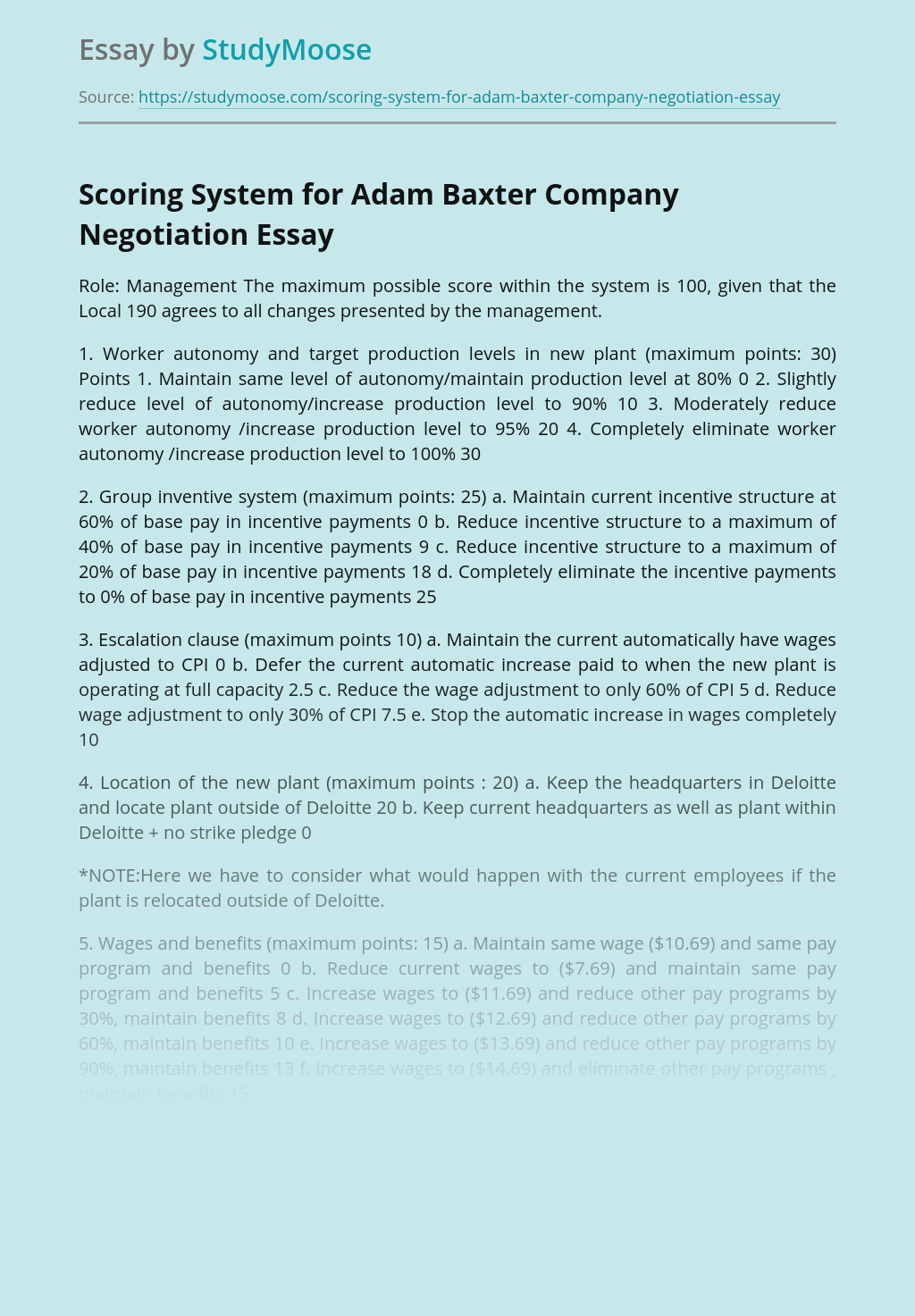 Turn in your highest-quality paper
Get a qualified writer to help you with
“ Scoring System for Adam Baxter Company Negotiation ”
Get high-quality paper
Helping students since 2015
Stay Safe, Stay Original