This poem was written by James Baxter who was born and lived in New Zealand. He was brought up in a farm in a quiet and bleak south east corner of New Zealand.

The poem is about a farmhand who is portrayed to be a very ambivalent character. He is unhappy and rather diffident in certain situations and extremely confident and gloriously happy in others.

relate to his emotions and melancholy.

Don't use plagiarized sources.
Get Your Custom Essay on Farmhand by James Baxter Just from $13,9/Page

However all his sadness is vanquished once on the farm where he feels like a king.

In the first two stanzas the poet describes the Farmhand as he stands outside the dancing floor.

The first stanza tries to give the impression from his gestures that he is a careless person not interested in what is going around him the way he is smoking and joking with his friends. But as the poet helps us observe him closer and find him ” Looking out into the secret night” and ” always his eyes turning to the dance floor and the girls” we realize that the farmhand is not as he appears to be.

It is obvious that he desires and longs to be inside but something is holding him back. Describing girls as “drifting like flowers” shows how he is able to appreciate their beauty and grace inspite of his work and natural settings being devoid of them.

Music is personified to show effect. Baxter says the music is so emotive that the “music tears slowly in his mind an old wound open” reveals that he has had an unpleasant sad emotional experience and the deep wound has not yet healed.

Painful memories may be still fresh and surface upon watching the girls dance on the floors or listening to the music or even gazing at the dark night, which shares his secret and sorrow.

The reader feels very sympathetic towards the farmhand in the second stanza when the poet writes, “His red sunburnt face and hairy hands were not made for dancing or love -making”. The description of his bodily features convey he is unappealing to the girls of upper social class and not fit to indulge in “dancing and socializing or love making” which is privilege of the elite and handsome.

The farmhand is engaged in an occupation, which benefits and is a necessity to all mankind. Yet his sacrifice and selfless attitude to his work is not appreciated and he feels inhibited and diffident to mix with girls because of his external appearance and social standing. He is categorized as only fit for: earth wave breaking and for using the plough”

The crops are described as “slow-growing as his mind”. This simile maybe interpreted as slow to reveal his emotions and express his thoughts and feelings and may possibly be the reason he is yet to have a girlfriend or wife.

The fourth stanza talks of the farmhand’s loneliness and vacuum he experiences in life. He longs for someone to love and someone who loves and cares for him. Like other people of his age and he yearns to have someone to walk with, to laugh and share life with.

He has his hopes and dreams but he feels because of his “hairy hands” and “sunburnt face” he may only be able to weave or yarn dreams but they may never become a reality.

Here again the reader is moved, as life has been so harsh to the farmhand because of the nature of his job that he is now even diffident and embarrassed to dream and hope.

In the last stanza the poet tells us that the Farmhand is in his domain The Farm and once in his natural element he is confident and comfortable. His looks don’t affect him and his low self-esteem is vanquished.

The sound of the tractor engine is music to his ears one which energizes him, not which makes him nostalgic and sad.

His hairy hands, which seemed clumsy around delicate girls on the dance floor, are perfect for his job he carries out effortlessly.

The poet uses the exclamation”Ah” as an exclamation of admiration towards the farmer and how perfectly he fits his role and job!

It is touching to note that the persona has not been given a name and is referred throughout as “Farmhand” gives the impression that he has no personal identity and is known and recognized by his job around which his life revolves. He lives for his job. 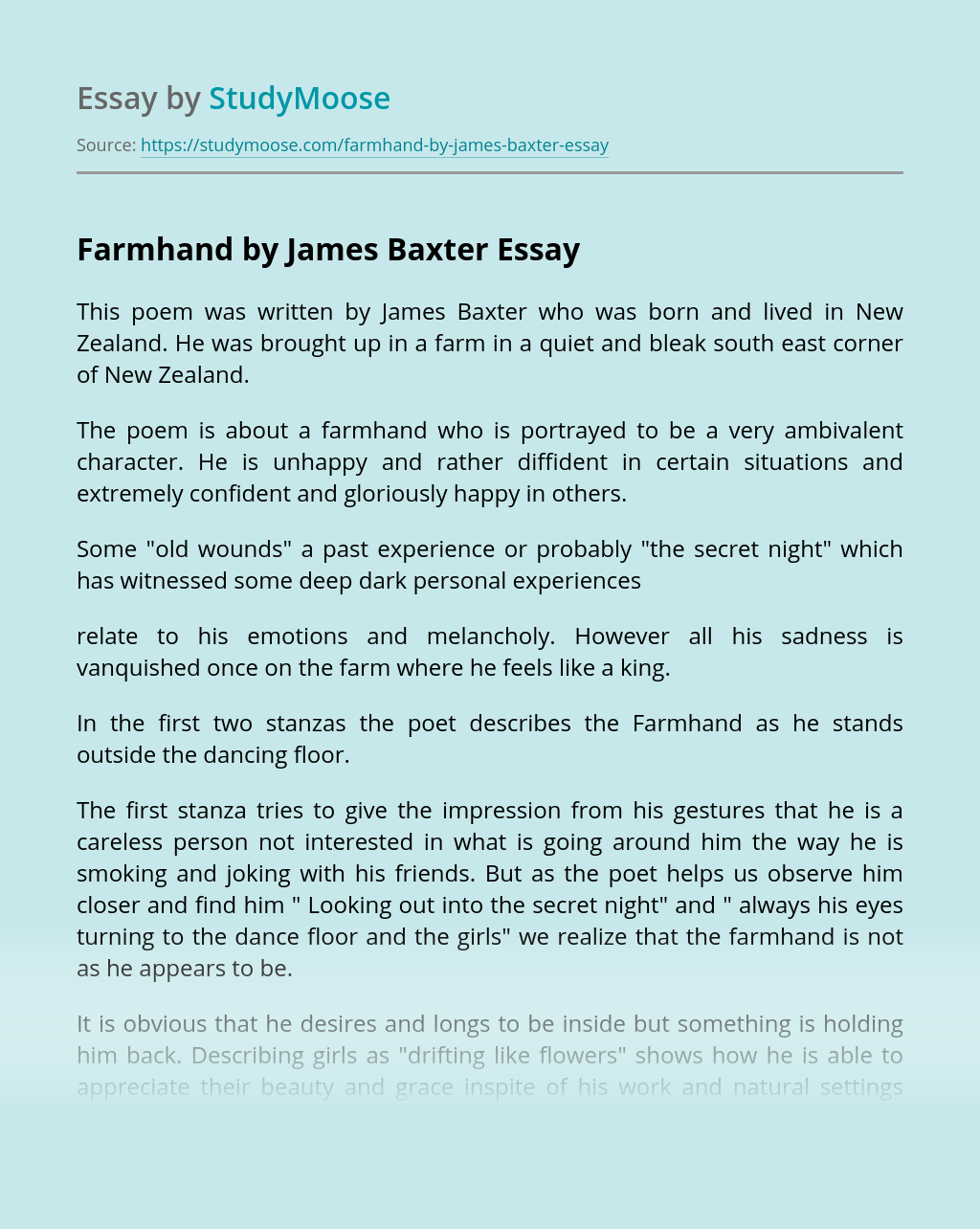 INTRODUCTION Indian Literature, literature in the languages of India, as well as those of Pakistan. For information on the literature written in the classicial language,Sanskrit,.The Indian literary tradition is primarily one of verse and is also essentially oral. The earliest works were composed to be sung or recited and were so transmitted for many generations...

To analyze Dickinson’s poetry, this paper will involve the analysis of three of her works, `Safe in their Alabaster Chambers”, “I Heard a Fly Buzz-when I died”, and “The Brain-is wider than the Sky”. 1. The poems were written in the first person. Since most of her poems tackled the depressing situation of death, the...

Born in 1772 in Ottery. St., T.S.Coleridge lead a very disquiet life in his early childhood. After his father’s death he was sent to the Christ’s hospital school. There he had felt a great emotional vacuum, which was the beginning of his continuos ill health. Charles Lamb, his schoolmate, gave us an account of this...

The poem ‘Tears’ by Edward Tomas was written in January 1915. This was a time when he had to make a serious decision about subscribing to the front line or not. This poem is typical of Thomas at this time and he tends to describe the beauty of the natural world, but there always a...

This week we will be talking about an aboriginal poet Oodgeroo Noonuccal, also known as Kath walker, who lived from 1920 until 1993. Oodgeroo came from the Noonuccal tribe in Queensland. Once she had completed primary school she left because she believed that even if she stayed in school there wasn’t the slightest possibility of...