Why Were Buffalo so Important to the Plains Indians

Plains Indians became totally dependent on the Buffalo for their existence and it provided them with food, shelter, tools, entertainment and clothing. The Plains Indians became traveling hunters because the Buffalo moved to different places and the Indians followed the vast herds that covered the Plains. Until the arrival of the horse, the Native Americans hunted on foot. As they followed the Buffalo killed as many animals as possible for the leaner times and during winter when game was not as plentiful.

Turn in your highest-quality paper
Get a qualified writer to help you with
“ Why Were Buffalo so Important to the Plains Indians ”
Get high-quality paper
NEW! AI matching with writer

The Plains Indian found many uses for the Buffalo. They would use the horns as building tools, arrow straighteners, cups and ladles.

The intestines of a Buffalo would be used as buckets usually for holding water and cooking vessels. The skulls were used for religious ceremonies. The bones would make arrowheads, dice, jewelry, paintbrushes and other tools. The tongue could be used as a hairbrush or it could be eaten raw as it was considered a delicacy. The fur would be used for pillow stuffing mittens and rope.

The tanned hide was one of the greatest uses of the Buffalo. It could be used for bedding, blankets, clothes, children’s dolls, drums, saddles and tipi covers. A tipi cover would be durable and last a long time.

The heart of a bull would be cut and left on the ground or eaten as it was said you would get the strength of a buffalo. The meat was cooked or preserved and the dung was used for fuel or smoked in ceremonies.

Why Were Buffalo so Important to the Plains Indians. (2017, Jan 16). Retrieved from https://studymoose.com/why-were-buffalo-so-important-to-the-plains-indians-essay 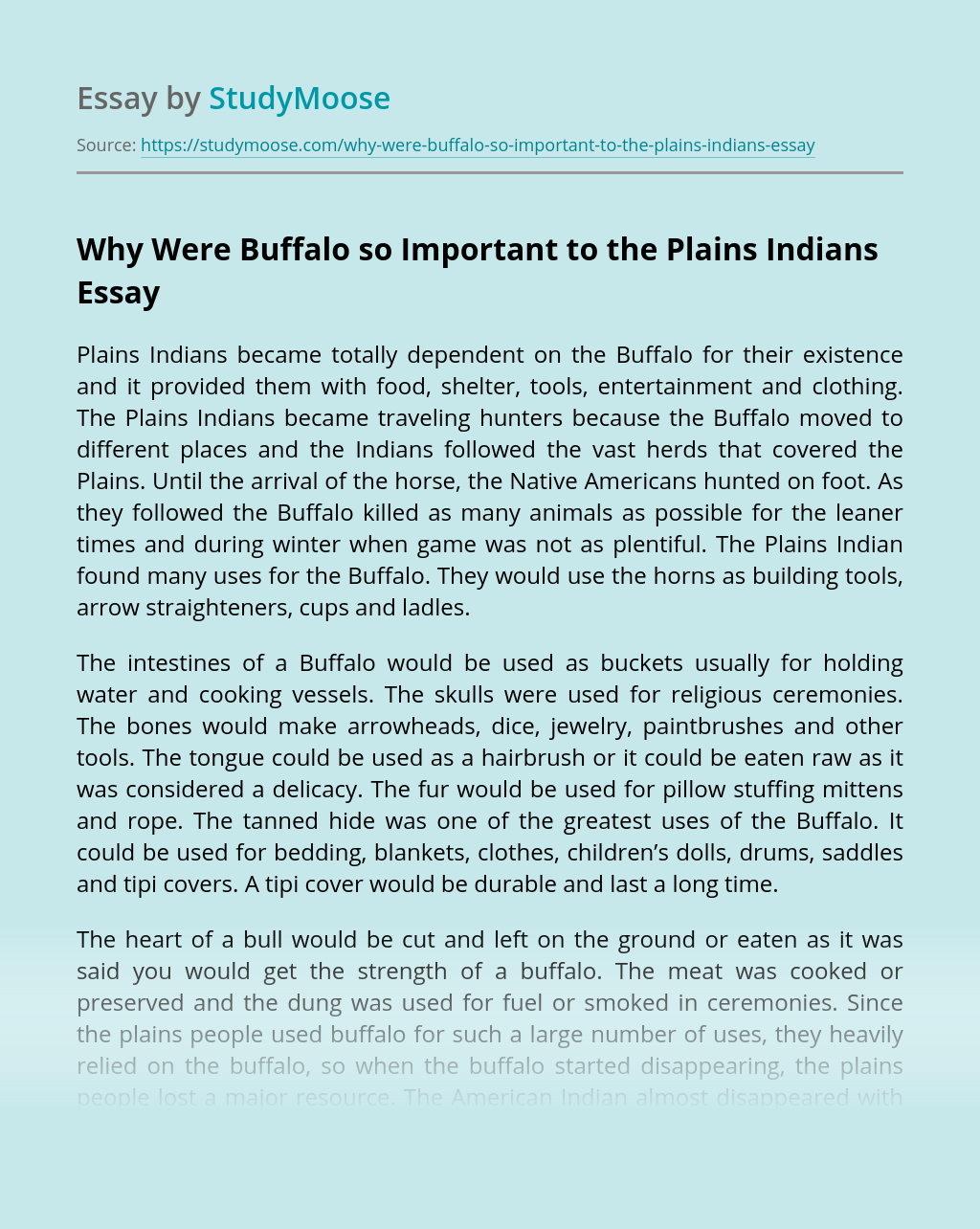 Turn in your highest-quality paper
Get a qualified writer to help you with
“ Why Were Buffalo so Important to the Plains Indians ”
Get high-quality paper
Helping students since 2015
Stay Safe, Stay Original