Would you like to live in a filthy atmosphere or do you prefer to breathe fresh air? You decide. Recycling is the act of collecting, separating and recreating used materials into new products. Not everyone recycles for various reasons, either they are too lazy or they just don’t care about the environment. “United States recycles about thirty-two percent of its waste today” (“Recycling Statistics”). Recycling should be enforced as a law in order to keep a healthy environment. People don’t care if they litter due to the fact that they will eventually get old and die, this type of people are careless about the future.

“Each person produces 4.6 lbs. of trash per day in the United States” (“Recycling Statistics”). Recycling is one of the best ways that people can do to help save resources in our everyday life. People are unaware of the damage that’s been done in our environment due to the deficient of recycling, we should recycle for various reasons; landfills are dangerous to our health, recycling saves money and the ozone layer is deteriorating.

To begin with, landfills are treacherous to both our health and environment.

Recycling can reduce the chances of trash being thrown into landfills and lessen both air and water pollution. Not all the waste that’s thrown away is recyclable, but recycling a small amount of trash can make a change in our environment. Landfills are composed of tons of trash mixed together creating toxic gases, which can lead to major health risks for people that live near landfills.

“The new study examined the occurrence of seven kinds of cancer among men and women living near thirty-eight landfills where naturally occurring landfill gas is thought to be escaping into the surrounding air” (Cothran, 37). Living near landfills can also affect children health and most commonly their height. “The most commonly reported effect of living near landfill is low birth weight and small size among children” (Cothran, 39). Avoiding the use of plastic bag and plastic paper is the best thing to do because if we don’t, it will pollute the environment and fill landfills. “Only 10% of Greece’s total waste is being recycled and the remaining 90% goes to landfills” (“Recycling Statistics”). As said before, landfills are very hazardous that can also damage the environment.

Landfills pollute the environment by contaminating the groundwater, its soil and producing methane. Methane is a greenhouse gas that’s stronger than carbon dioxide; these gases are to be known as the cause of global warming. The best way to moderate the amount of methane in landfills is to reduce the amount of organic materials, especially food. “Organic materials such as yard trimmings, paper products, and food wastes make up more than two-thirds of human trash. This organic waste could become useful compost instead of being deposited in landfills” (Allin, Craig W., and Robert McClenaghan. Encyclopedia of Environmental Issues. Vol. 3. Pasadena, CA: Salem, 2000. 1035-036). In order to keep our environment clean, we have to avoid landfills and recycle as much as possible. As a matter of fact recycling saves money than generating landfills. Selling recyclable items balances the costs of accumulating and processing items, making recycling the cheapest choice for everyone.

For example, aluminum costs twice as much as recycled aluminum, because a lot of energy is needed to cut aluminum from its raw form. Items that are made from recycled materials can also be purchased at a cheaper price. As more items are reused over and over, it also reduces the amount of waste going into landfills. Recycling does not limit to your house, neighborhood, or town recycling is nationwide. “Texas Instruments recycles 81 percent of non-hazardous solid waste in its U.S. operations, saving at least 10 percent on manufacturing resources each quarter, or a minimum of $16 million” (“Recycling saves money”). Recycling brings benefits to the economy by creating jobs to people for transporting, processing and recreating used materials into new products. Paper is the most used product in our everyday lives; it’s used for newspaper, magazines, shopping bags and more. “It is believed that the U.S. cuts approximately 40 million newspapers each day, leading to the equivalent of about half a million trees ending in landfills every week” (“Importance of recycling”).

Nowadays, people have realized how much paper is being thrown away, so instead paper is being recycled more than the past few years. “Around 45% of the paper Americans use each year (over 53 million tons) is recovered for recycling. This is made into a wide variety of goods such as new newsprint, boxes and office paper, paper towels, tissue products, insulation, cereal boxes, molded packaging, hydro-mulch, gypsum wallboard – even compost and kitty litter” (“Solid Waste”). A lot of things can be done with used materials such as reusing your clothes to make curtains or use them to wash your car. Cardboard boxes can also be kept for occasions when in need to ship things to relatives. “Recycling one ton of cardboard saves over 9 cubic yards of landfill space and saves 24% of the total energy needed for virgin cardboard” (“Select an Area”). Eggshells, apple cores and orange peel can be also used as fertilizers for gardens, in order to give them some natural nutrients. There are many ways to save money; you just got to find the time and be creative to come up with different ideas.

“The ozone layer above the Antarctic has been particularly impacted by pollution since the mid-1980s” (“Ozone Depletion, National Geography”).Chlorofluorocarbons (CFC’s) is found in aerosol sprays, they are non-toxic, non-flammable non-carcinogen. Chlorofluorocarbons are commonly used as coolants in refrigeration and air conditioners, as solvents in cleaners, mostly for electronic circuit boards, and it’s also used for fire extinguishers. This type of chemical also damages the ozone layer strongly releasing bromine and chlorine.

The ozone layer protects the environment from the sun’s harmful ultraviolet rays. If recycling is not enforced the gases that are released from the trash will go into the ozone layer which can diminish it. Recycling chlorofluorocarbon chemicals will help the environment and reduce the chances of ozone layer depletion. “The law requires recycling of CFCs and labeling of products containing ozone-destroying chemicals” (“Repairing the Ozone layer”). Keep in mind that the more of creating landfills or people refusing to recycle, it will lead to ozone depletion.

Up to this point everyone should be for recycling, but some of the people are not. One good reason why someone might still be against recycling is because mandatory recycling waste resources, which is totally false. Recycling is not wasting resources, it protects the environment. Resources will be waste if recycling is not enforced in time. If no one ever recycles the world would be in great danger and many species will go extinct including the human race. Deprived of recycling could lead people to wasting resources. It is understandable that current recycling programs are too expensive because of all the process that needs to be done, but if the people don’t take action now then who will? People will want to recycle when the damage is too great to be undone to the environment.

The main reason to recycle is most probably because if people don’t recycle, everyday resources will soon disappear and will leave the people with nothing to conserve the environment. As everyday resources keep lessening, they will cost at a high expense, subsequently. For example, in order for people not to waste resources they will easily burn their trash or recyclable items, leading to air pollution. “If we do not do our part now to protect the earth from harm and conserve the world’s resources, our valuable resources would be depleted one day, and there could be so much rubbish and pollution that Earth would not be livable anymore, if not totally destroyed” (All Recycling Facts & Eco Green Living).

A lot of people don’t recycle because they might think they are the only ones to recycle, a person recycling can make a huge difference to the environment. “Individual action for the environment often calls for small acts, and recycling serves as one of the best examples of that. While it’s easy to understand how small actions undertaken by millions of participants can have an effect, when holding an aluminum can and deciding whether to pitch it or recycle it, it’s easy to believe that your choice doesn’t have much impact” (“How Does One Recycled Can Make a Difference?”)

In conclusion, recycling is one of the best ways to save resources in our everyday life. Everyone enjoys to be surrounded with a clean atmosphere and not to worry about wearing masks since the air is too polluted. Recycling should be mandatory for everyone in order to conserve the environment. People have been unaware of all the damage that’s been done to the environment as a result of deficient of recycling, landfills being hazardous to our health and most importantly the ozone depletion. If the people want the earth to last for a couple of hundred years let’s make a difference “reuse, reduce and recycle.” Remember that one person can make a huge difference to the environment. “Go green” 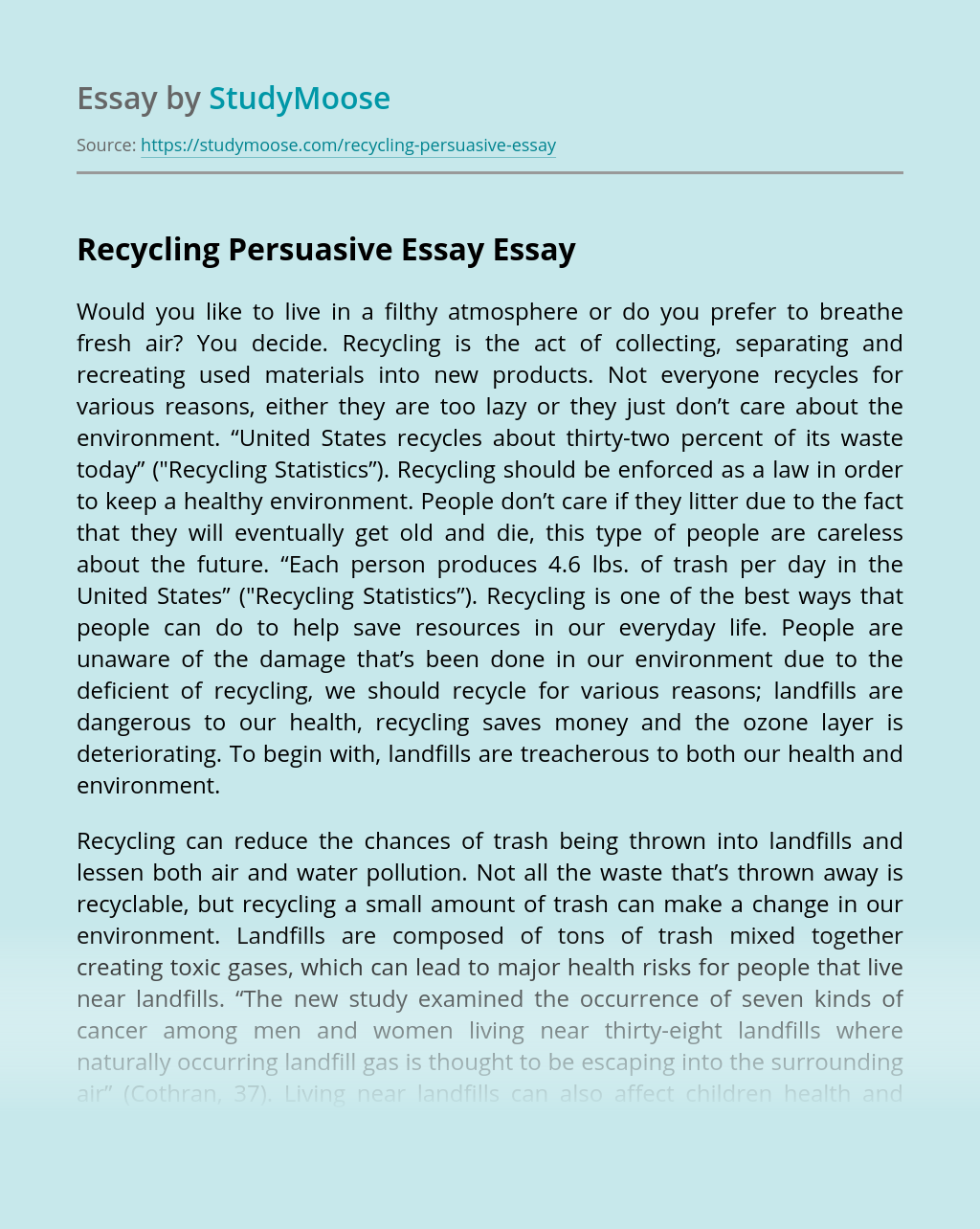