Nutrients are elements essential for life on Earth. The most important of these nutrients are water, carbon (and oxygen), nitrogen, and phosphorous. These nutrients are recycled throughout the ecosystems to provide for the living organisms. Water takes up more than two-thirds of the Earth’s surface and makes up almost 70 percent of living matter (Pidwirny, 2006). Such abundance of water on Earth makes it also the most valuable among the nutrients. Water cycle recycles water with the use of processes such as evaporation, condensation and precipitation (Lio, 2008).

Don't use plagiarized sources.
Get Your Custom Essay on The Water Cycle Just from $13,9/Page

Evaporation occurs when liquid water is transformed to water vapor with the use of atmospheric temperature. Water vapor then rises up into the atmosphere. Evaporation occurs not only on surface waters, but also on animals’ and plants’ body surfaces. Transpiration is evaporation that occurs in plants. Plants absorb water through their roots, leaves and branches and release water through specialized openings that regulate water in the plant body.

Condensation is the opposite of evaporation. The water vapor in the atmosphere is turned into liquid water droplets. This process is also affected by low atmospheric temperature. With very low atmospheric temperature, water vapor condenses to form ice crystals. Accumulation of condensed water vapor forms clouds. Clouds that are heavy enough release these water droplets in the process of precipitation in the form of rain (Lio, 2008). Ice crystals that fall from the atmosphere are called snow or hail (De Beyer, 2005).

Water reservoirs are where water is stored after they fall from the atmosphere. Such reservoirs are the bodies of water, biosphere and groundwater (Pidwirny, 2006). Groundwater moves into soil and rock in the process of infiltration (De Beyer, 2005). Such movement is affected by gravity because of the downward movement of groundwater. The water that did not become groundwater is called runoff. Large amounts of runoff can form large bodies of water (De Beyer, 2005). Runoff and groundwater also provide water into oceans and lakes to replace evaporated water (Pidwirny, 2006).

The processes of evapotranspiration and condensation are largely affected by temperature. Water reservoirs provide storage of rain water. Water moves into the soil through infiltration and is stored as groundwater. Excess water not used as groundwater is called runoff. Runoff is then added to oceans and lakes. Plants absorb water through the roots and then released through transpiration. Water reservoirs also start to evaporate water into the atmosphere thus completing the cycle.Water cycle is an important process that largely affects life on Earth, whether it may be living or non-living. 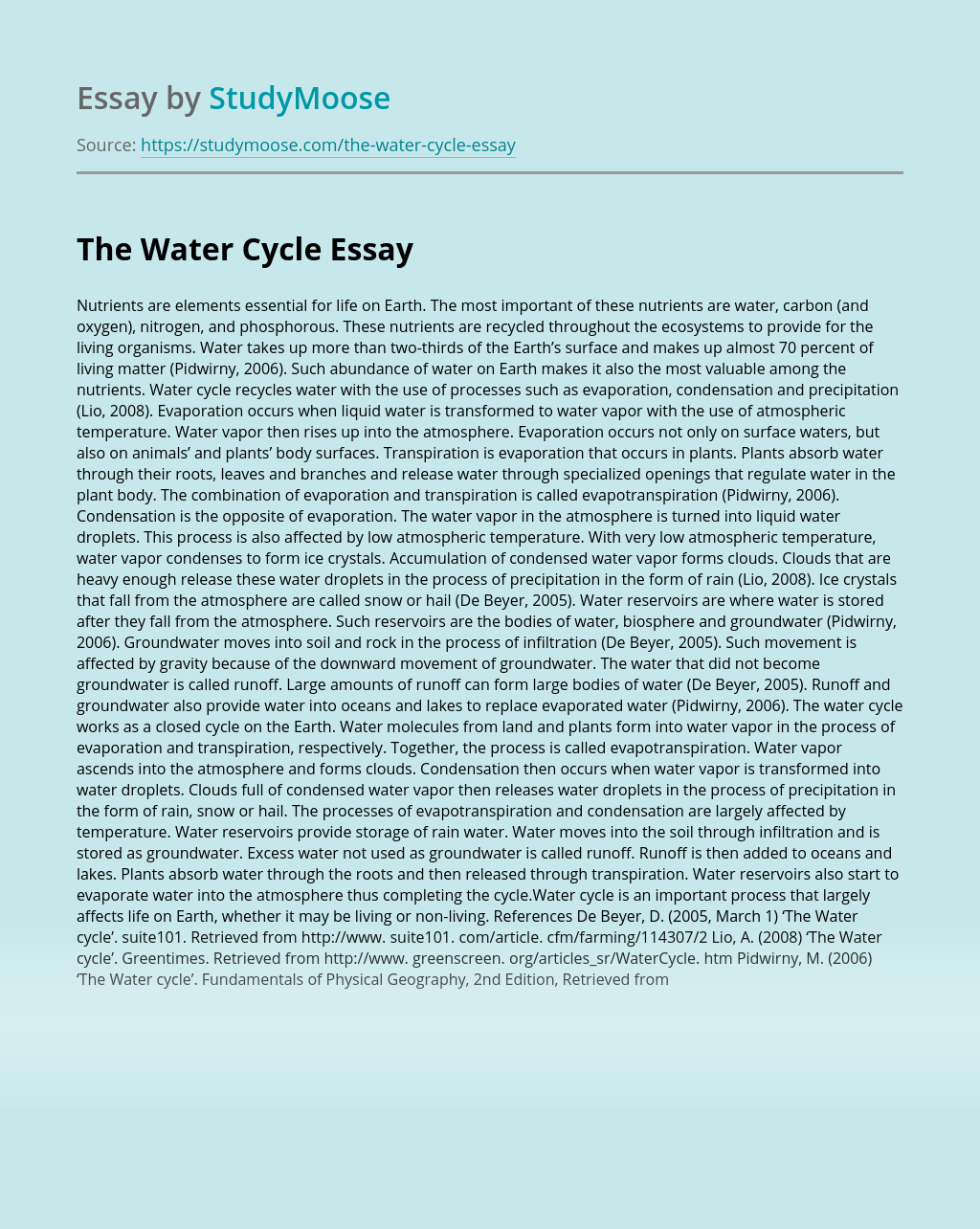 Rate this post In a society based only on materialistic possessions, sometimes we overlook even the simplest of things, and the most valuable to our survival as a human race and as a planet. Everywhere around us people envy great architects and artists because of their remarkable creations. Though, we, as a human race disregard...

How Xerophytes Are Adapted for Water Loss

Rate this post Biology essay: describe the adaptations shown by xerophytes to reduce water loss A Xerophyte is a type of plant that is well adapted to water. Water loss is something that is very bad for the plants if the ratio of water lost to water taken in is too drastic. The cells may...

Rate this post AIM: To determine the linear shrinkage likely to be experienced by clay material THEORY: Linear shrinkage is the decrease in length of a soil sample when oven-dried, starting with a moisture content of the sample at the liquid limit. This test is used to measure the percentage decrease in dimension of a...

Rate this post I. Introduction A.) Background of the study Why did you perform the study? The study was conducted since of the approaching gardening inside the facility of the school especially on the vacant area near the new structures. The study intends to help in the improvisation of the school garden. It is likewise...

Rate this post To develop an appropriate marketing strategy would involve creating a link between the external environment and the key internal factors of bottled water. This dissertation from www.coursework.info SWOT analysis is the focus upon the strengths, weaknesses, opportunities and threats facing a business internally and externally. To enable a SWOT analysis to be...

Descartes’ Discourse on the Method

Rate this post None of the proposed philosophical theories is exact, not even a combination of two or more theories (Sayre, 2011). However, Descartes has unique way of metaphysical argument concerning existence of God. Descartes’ Discourse on the Method (Part IV) ends surprisingly with a claim of God’s existence, which can be deduced from the...

Rate this post Every year, there is an increase of people who suffering from obesity. Many diet plans, dietary supplements and exercise are trending now a days on social media like facebook and youtube. One of these is the seven day water fasting challenge. Water fasting is a type of diet plan where in you...