Why Is Public Speaking Important?

Public speaking is the procedure of publishing information to the congregation. Usually, public speaking takes a place in schools, workplaces, and also in our real lives. The prosperity of knowing how to interact to the audience includes sharpening critical thinking in addition to verbal and nonverbal communication skills. Public speaking involves communicating information to a large audience. and the message that is conveyed to the audience must be clear and meaningful to entertain the large audience .public speaking is also the art of effective oral communication with a large number of audience (Webster, 2019) In addition to public speaking consists of 3 pillars that was written down by Aristotle from 2300 years ago which are ( Pathos, ethos, Lagos) ethos is the character of the speaker, pathos is the sentimental connection between the speaker and the audience and logos is the logical argument ( citation) those 3 pillars are the main qualities that a speaker must have in their speech so that the audience can accept and listen carefully to the message of the speaker.

Don't use plagiarized sources. Get your custom essay on
“ Why Is Public Speaking Important? ”
Get custom paper
NEW! smart matching with writer

There are a huge number of people nowadays that that uses public speaking to share their stories through and to influence such as Franklin Roosevelt, Billy Graham, Martin Luther King and Barak Obama.

Public speaking can help to build up confidence and also it can bring a lot of seen improvements in personal lives and also the personality, it helps to be organized and to share powerful speeches and meaningful ideas.

Public speaking may be the most daunting thing as the speaker must stand up in front of a huge number of people, but however is has many benefits such as it builds self-confidence and develop one’s critical thinking skills and also it ca develop the speakers critical thinking skills and also it can develop the speakers critical thinking skills, personal and professional skills. It can influence the world and can change people’s thoughts. Public speaking can help us to build self-confidence. Based on recent surveys, 75 percent of adult’s population is afraid of public speaking,( Mc Croskey, 1993:Richmond and Mc Croskey.1995) it is proven that most people prefer to be listeners, not speakers according to studies. But despite this people don’t realize that public speaking helps them to be more confident and nervousness is because of the stage fright and also because of the large number of people. But all public speakers had come over this issue. The main reason of nervousness because speakers are feared of being stared at, fears of failure, rejection, so in order to be more confident, public speakers must know the right way to handle nervousness.

According to Lucas E.2012, one of the keys to gain confidence is by doing preparations thoroughly and pick the best topic that thy can discuss widely and make sure that the message will be delivered clear to the audience. In addition to public speaker must think positively, because of confidence is known as the power of positive thinking. After a few times of giving a speech. Public speakers will automatically develop self-confidence in speech-making abilities and will become more confident. As result, many people now to have a high level of public speaking anxiety (PSA) are more confident and competent after they have done it many times.

Public speaking can help to improve communication and personal skills .one of the best benefits of learning to give a good speech is it brings personal stratification that they experience is unparalleled. Positive applause or a response from the accidence can help the public speakers to feel confident. Also, it can bring a lot of seen improvements in their overall personalities. Public speaking is linked to communication skills and can be described as a form of communication. Public speaking does not always mean that they have to give a speech to a large audience. It happens in interviews or when we are giving a presentation in the class. All these are forms of public speaking, in these situations, if we have the ability to communicate properly, it can help to shape up our future as then personal skills have been improved. Nowadays, employers look for employees who can present ideas in a clear way and that can listen carefully and find a good solution and also think critically, they are looking for higher-level positions is communication skills. The ability to present clearly and persuasively that we gained from public speaking will lead to job success (Jaffe,2004).

In addition to, public speaking can improve critical thinking skills.( Lucas .E,2012) in his book described that critical thinking is the ability to see the weakness of other people’s arguments and it contains skills such as the ability to differentiate facts from opinions and to judge wisely the credibility of the topic to be sure of the evidence that is supported by the speakers. Also, it is the ability so see widely the relationships among the ideas or throughout (Lucas,2012,p.16)however writing a speech needs a huge responsibility and carefulness, it is not only enough to have the message but also to figure out how to deliver the message to the audience that matches their way of thinking so they can decode it. according to Lucas (2012) writing a speech is not only about figuring the ideas but also about the importance of arranging the ideas themselves, public speakers have to think wisely to choose the key elements that are relevant to the audience and to make the audience understand the message clearly. Organizing the speech in this way is a great deal to improve critical thinking skills, if public speakers started thinking clearly about the speaking techniques, they might also improve their general communication style, a strong speech requires strong evidence arguments and also a good structure to make the speech clear and the content is the main important thing, in this situation it makes the public speakers more effective thinkers and can enhance their ability to think out of the boss. Because of all this public speaking is included as a part of education to develop the skills among the students.

Furthermore, public speaking is used also in influencing the world and can change people’s thoughts and their way of thinking. Many people from all over the world have shared their stories to influence people through their public speaking like Martin Luther King, barrack Obama, Billy Graham in the united states and in many other countries.

Nowadays there is an event that is made usually that is called TedX, A TEDx event is a local gathering where live TED-like talks and videos previously recorded at TED conferences are shared with the community. TEDx events are fully planned and coordinated independently, on a community-by-community basis. TEDx is an event in which public speakers give there speech to influence people and to lighten up their thoughts , many people were positively affected by TEDX speeches that is given by public speakers because it discusses all the problems that people can face.

Despite from usual conversations, public speaking contains purpose and reasonability in every interaction with the audience. Public speakers must use their knowledge to persuade and to motivate others to take collective action to rich their desired goals. Public speaking skills can be used in many platforms and influence multiple numbers of people, for example at Facebook, public speakers can send their message through social media and also in meetings, schools, and others. So this way public speaking has the power to influence others and to peruse them in many ways. For example in high school, they often tend to bring a public speaker to students about the side effects of smoking and drugs to they can be lighted up and be aware of such a thing.

Why Is Public Speaking Important?. (2021, Aug 27). Retrieved from https://studymoose.com/why-is-public-speaking-important-essay 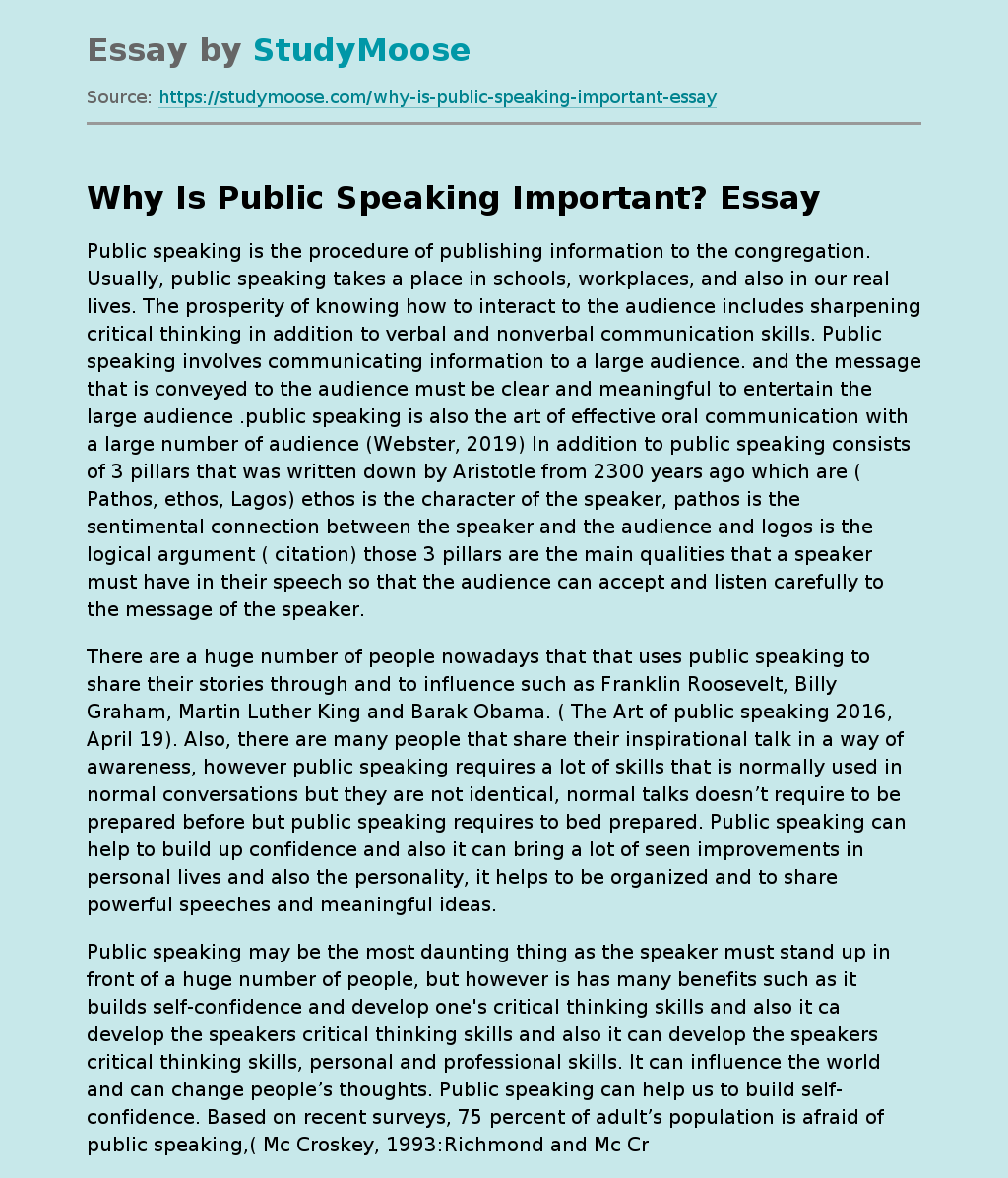