Why Does Macbeth Find Life Meaningless?

If Macbeth were to look in the mirror, at the time he spoke these words he would see the reflection of an unrecognisable man, compared to that which would have looked back at him at the beginning of his story. The man who looks back at him now, complaining that life signifies nothing, is soul-less, empty, and resembles very little of the admirable reflection he once saw. This reflection has nothing left to live for, with a heart that is no longer alive.

Don't use plagiarized sources. Get your custom essay on
“ Why Does Macbeth Find Life Meaningless? ”
Get custom paper
NEW! smart matching with writer

It beats loud and heavy allowing him to breath, however he cannot feel it. His pride is non-existant and he feels only pain, regret and remorse. The voices that scream at him within his head, terrorise his thoughts and remind him of the crimes he has committed.

Macbeth cannot see past his own doomed life and is blinded by his own failures. Life in his eyes appears now as a pointless task he must endure which offers no significance at all.

This tragic conclusion Macbeth has come too, has been largely influenced by the guilty and unstable conscience which resides within his body. He is no longer the admirable, vivacious and honourable man he once was. The tragic fall and clouding over of his once positive outlook on life ended his greatness, and sprung from the prophecies the three witches made.

These prophecies seduced Macbeth, as if they had awakened his deepest and most secret ambitions, forcing him to contemplate evil ideas of murder. Macbeth eventually gave in to these temptations which allowed evil to dominate the rest of his life.

As these words were spoken, Macbeths thoughts were forever plagued by the possible glory and power that these prophecies would provide if they were to become realities. He was motivated by his desire to change his place in the strict hierarchical order of Scotland, in which he was already honoured. He disturbed that order, and toppled the King from his rightful place. Although originally hesitant and quick to argue against killing Duncan, Macbeth allowed his ambition to overcome his conscience, violated his sense of right and wrong and murdered King Duncan in a quest to realise the prophecies.

This crime presented Macbeth with a dark and gloomy world in which the forces of good and evil began to battle each other within his head. Harmony was destroyed, nature was violated; Macbeth had acted against his own nature, and became trapped in a cycle of escalating crime, beginning with the murder of his friend Banquo, and climaxing with the murder of Macduff’s wife and children. As he continued to loose his sense of reasoning Macbeth’s outlook and appreciation of life too rapidly disintegrated.

If Macbeth had stopped at this point in his life, and looked in a mirror, maybe he would have taken notice of this new man that looked back at him, and remembered the honourable man he used to be. However Macbeth failed to remember how fulfilling his life was before this violence and corruption ruled it, and consequently could not find any meaning left in his life. Macbeth is now a dead man walking who has become so numbed by the numerous murders he has carried out that death has become like a companion to him who is with him all day long. When it returned to him with his wife, Macbeth was barely surprised and uttered to himself these words as a testament to the state of mind he is in and what he has become.

“Life is a tale…, Told by an idiot, full of sound and fury, Signifying nothing.”

Why Does Macbeth Find Life Meaningless?. (2016, Jul 06). Retrieved from http://studymoose.com/why-does-macbeth-find-life-meaningless-essay 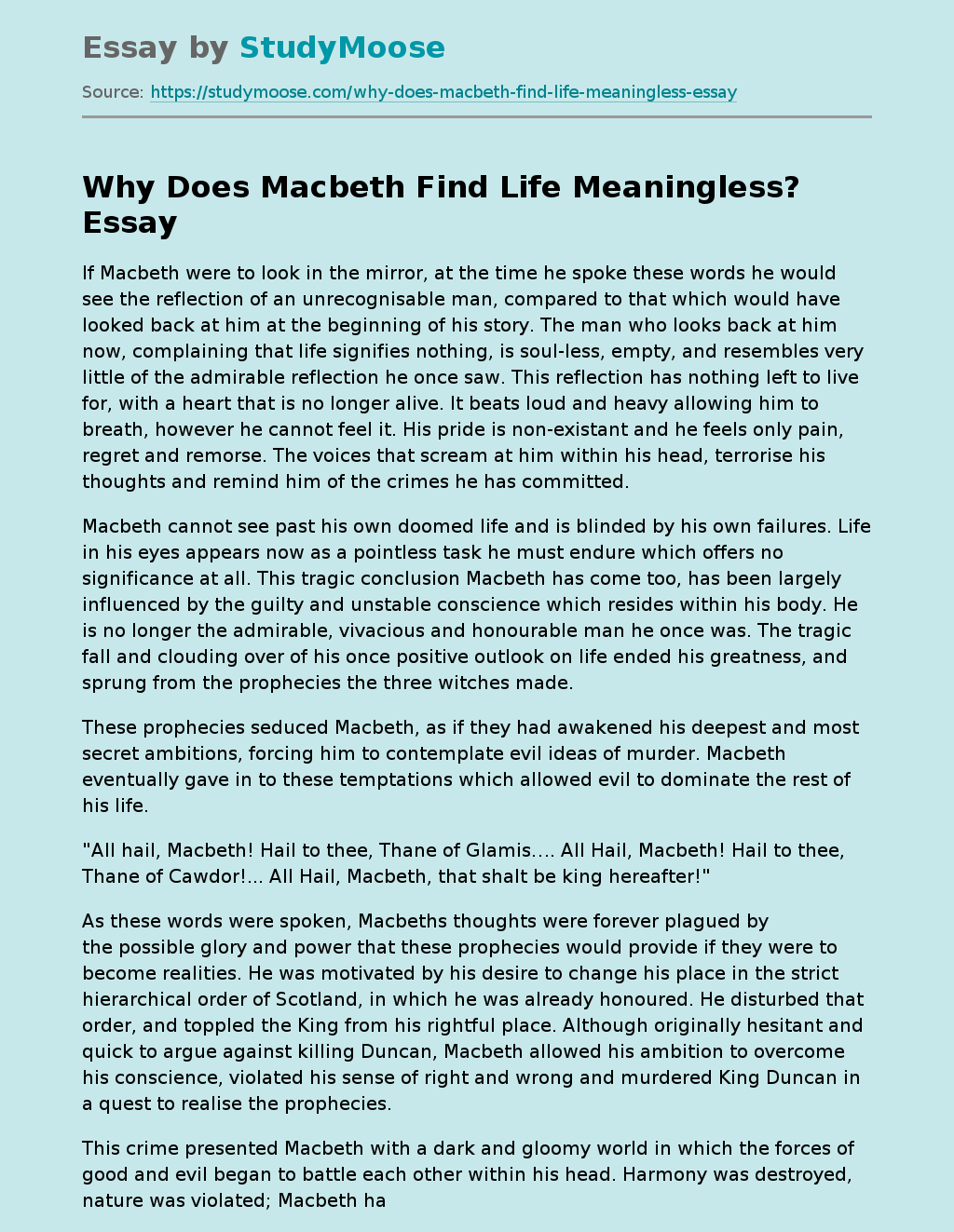