When the average American thinks of dinner what comes to mind?

When the average American thinks of dinner, what comes to mind? Perhaps it is a plate of rice, with broccoli and a well-cooked steak. For many Americans, that is what is considered healthy and “normal”. However , over the recent years, diets that do not include animal products have become increasingly prevalent.

Many have undergone the transition from a more tradition diet to a plant-based diet. More awareness has been cast on such a diets numerous health benefits, the ecological impact of meat cultivation, and the ethics of consuming animals when it is arguably no longer needed in the modern world.

Don't use plagiarized sources. Get your custom essay on
“ When the average American thinks of dinner what comes to mind? ”
Get custom paper
NEW! smart matching with writer

Thus, many Americans question the need for meat in their diet, and remove it entirely to embrace a lifestyle based on consuming plant products.

Lacto-vegetarians consume dairy products, but avoid meat and eggs. Ovo-Vegetarians are able to consume eggs to the exclusion of meat and dairy. Pescatarians, on the other hand, consume fish but do not consume any type of land based meat. Pollotarians consume poultry, however they do not consume any red meat. Flexitarians, more commonly known as semi vegetarians, consume meat on special occasions but try to avoid it as much as possible.

According to research analysis made by Economic research service and the United states department of agriculture made in 2014, meat lovers have a higher footprint by creating more CO2 gasses.

One kilogram of meat produced has been estimated to produce the same amount of greenhouse emissions as if one were to drive 63 miles in a car. Beef in particular produces almost 300 kilograms of Carbon dioxide per kilogram of protein produced.

According to Joseph Poore of Oxford University, “A vegan diet is probably the single biggest way to reduce your impact on planet Earth, not just greenhouse gases, but global acidification, eutrophication, land use and water use”(Poore). Lisa Kemmerer , author of the book “Eating Earth” sums it up perfectly, “Cheap meat, dairy, and eggs are an illustration- we pay for each with depleted forests, polluted freshwater”. In short, cutting meat out of your diet is an amazing way to reduce ones carbon footprint because it produces less greenhouse gasses and other pollutants.

Contrary to popular belief, eating plant based does not always mean eating raw fruits and salads all day. You can get nutrients from greens, fruits ,vegetables, soy, beans and legumes. There are supplements for different items such as dairy, meat and eggs. Some milk alternatives are hemp, soy, rice, almond and oat milk.There are egg alternatives such as egg tofu and firm tofu that can be transformed into scrambled eggs or egg whites. Egg tofu is shaped in an egg form that can be sliced and seasoned with a seasoning of choice. There are even meat alternatives such as plant based burgers like The Beyond Burger. The Beyond Burger is a plant based burger and according to beyond burger it is soy and gluten free with no GMO’s and has 20 grams of plant protein. There are many alternative routes that one can take in order to gain the nutrients that meat would otherwise provide.

Fortunately, new up and coming restaurants are now accomodating people who do not consume meat or meat based products. They are reinventing what many people consider a restrictive diet of only salads and fruits. Fruits, plants, vegetables and more are being used to create dishes that are devoid of animal products. Restaurants are even using the farm to table concept. Restaurants are now buying and using produce that is now within 50 mile radius or less. These restaurants are supporting farmers and local economies, in addition to helping spread knowledge of vegetarian diets. It is an exciting time for those who wish to exclude meat from their diets.

A key argument is that the consumption of meat is inhumane. Killing animals for food can be considered cruel and unethical since non-animal food sources are plentiful. Yet, only a small number of people are vegetarian. Animals are living beings are capable of feeling emotions and social connections. Some animals are going extinct just for their meat. For example, sharks are killed every year for their fins in order to make soup, sandwiches and other foods. Sharks are left with no fins and are thrown back into the water, so they can die at the bottom of the ocean. Sharks are just one of many animals that are brutalized for their meat. Additionally, scientific studies show that cattle, pigs, chickens, and all warm-blooded animals can experience stress, pain, and fear. In the United States, about 35 million cows, 115 million pigs, and 9 billion birds are killed for food each year. Many animal and vegetarian activists advocate that these animals do not have to die to satisfy an unnecessary dietary preference of selfish human beings.

Many opponents of a vegetarian diet say that meat consumption is healthful and humane, it is the part of the circle of life and that producing vegetables causes many of the same environmental problems as producing meat. They also argue that humans have been eating and enjoying meat for 2.3 million years. Eating meat is not cruel or unethical it is a natural part of the cycle of life, according to non-vegetarians.

They claim that vegetarians raise the value of animal life over plant life. Research has shown that plants are able respond electrochemically to threats and may feel fear, so vegetarians are also causing harm every time they kill and eat a plant. Every organism on earth dies or gets killed, at some point, so other organisms can live. It is believed that nothing is wrong with the cycle, it is how nature works according to non-vegetarians. US meat consumption does not significantly contribute to global deforestation, or loss of US forest land. In 2001 about 95% of animal products consumed in the United States were produced in the United States. Despite the US consumption of about 27 billion pounds of beef per year, the percentage of forested US land has remained steady at around 33% since 1907 according to

The inclusion of meat in the ancestral diet provided a form of nutrients and protein that, when combined with high-calorie low-nutrient carbohydrates, allowed us to develop our large brains and intelligence. “Evidence shows our taste buds evolved to crave meat savory flavor. Meat is the best source of vitamin B12, a vitamin necessary to nervous and digestive system health”. However, it can be found in eggs and dairy. A study showed two in three vegetarians were vitamin B12 deficient compared to meat eaters.” According to meat technology. People who tend to lack in iron tend to be anemic. Even in countries like the Us women in urban and rural areas tend to be anemic.

Though this seems to be a compelling argument, it is also flawed. Americans today do not live under the same conditions as our stone-age counterparts. We have plentiful access to numerous other sources of protein, such as beans and tofu. These foods grant superior nutrition, without the cost of animal lives.

Limiting your consumption of meat can probably lead to the end of meat eating. It takes one person to make a difference, and if many people think like that, we can all begin to live a healthier and more humane life. Our bodies are now able to adapt to a vegetarian diet compared to 2.3 million years ago. There are many substitutes for the nutrients provided by meat, and most of them are cheaper alternatives. Overall, it is more efficient for more Americans to adopt a vegetarian lifestyle. Not only is eating plants a more ethical way of living but a healthier one. eating plant based may help you feel refreshed. By eating healthy you are doing the planet a favor as well as yourself.

Being “plant based” will eventually be more common and more animals can be saved from ethics of killing animals for food. We can lower emission of fossil fuels and other toxic gasses. we can save our planet and be healthy just by even limiting our consumption of all animal products to hopefully make an impact. Saving animals even, such as the shark.

When the average American thinks of dinner what comes to mind?. (2019, Nov 29). Retrieved from https://studymoose.com/when-the-average-american-thinks-of-dinner-what-comes-to-mind-example-essay 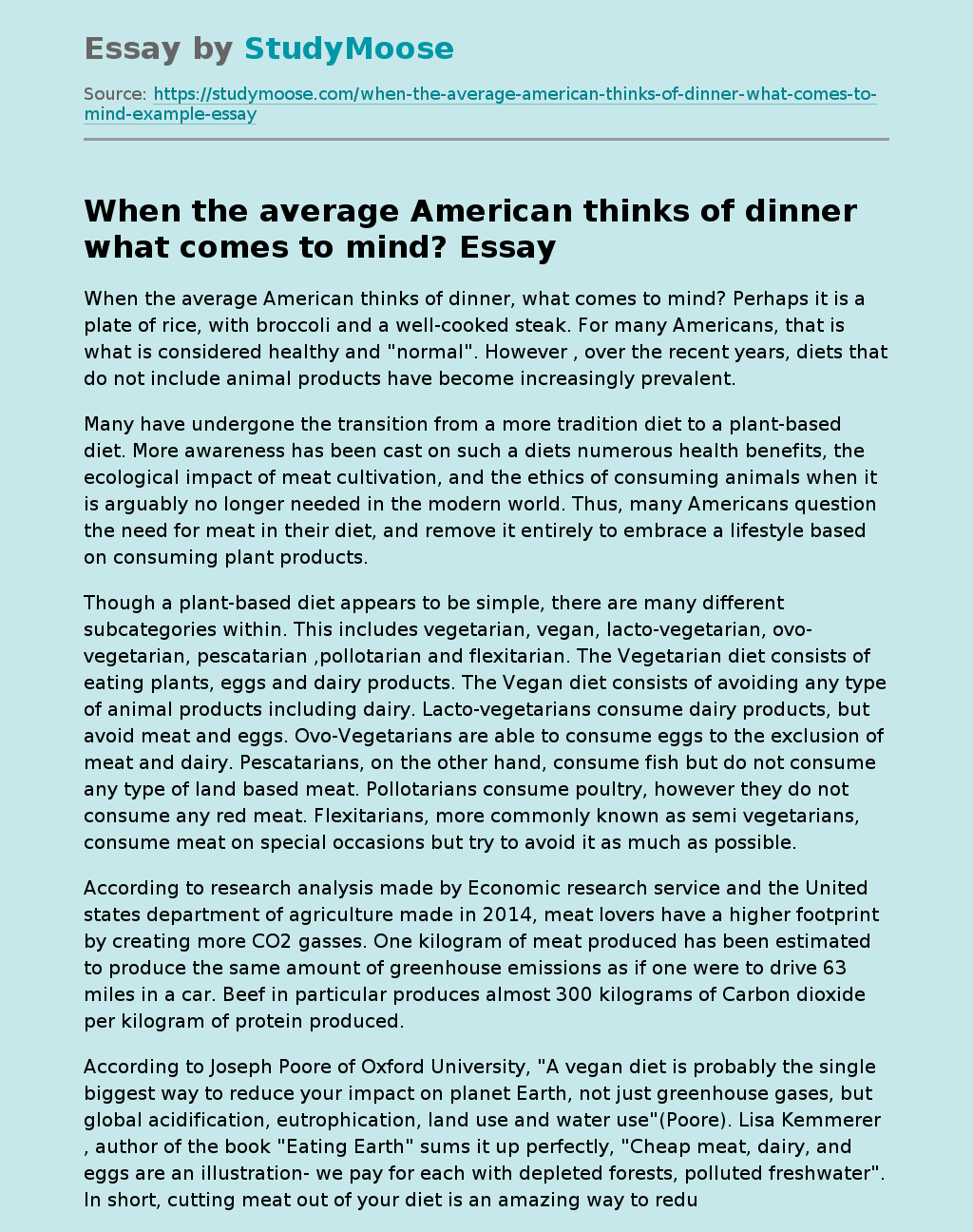