With reference to act 3 scene 3, explain why Othello becomes convinced of his wife's unfaithfulness

During the time Othello was written it was not uncommon for a husband to believe his wife was having an affair. The play expresses this theory very clearly in act 3 scene 3 were Iago easily persuades Othello that Desdemona is having an affair.

At the beginning of the scene Desdemona is asked by Cassio to try and persuade Othello to give his job back. She says what she will do and shows her character as very trusting but also very naive.

“His bed shall seem like a school, his board a shrift: I’ll intermingle everything he does with Cassio’s suit.

Don't use plagiarized sources. Get your custom essay on
“ With reference to act 3 scene 3, explain why Othello becomes convinced of his wife’s unfaithfulness ”
Get custom paper
NEW! smart matching with writer

She says to Cassio she will nag Othello until he gives Cassio his job back. Later in the scene Iago starts to try and persuade Othello that Desdemona is having an affair, once Othello starts to think ‘maybe my wife is having an affair’ this will look bad for Desdemona since she will constantly be talking about Cassio and how good he is making Desdemona very naive in think that Othello won’t start to think she is unfaithful, but Desdemona wont start to think this because she was brought up without any relationships and doesn’t know that you don’t talk of another man constantly to you’re husband.

Later in the scene Iago begins to persuade Othello that his wife is having an affair. He used metaphors, which provoke Othello to get angry to make him want more information and be more emotionally unstable to handle what Iago is telling him.

Iago holds information this is constantly making Othello want more information even if he knows he won’t like what he is about to hear. When Iago is telling Othello this information he uses racist language against Othello, which seems very strange since in modern time anyone would make a huge reaction to what Iago says.

As Iago continually insults him he doesn’t make no reaction, but even though it seems strange now it would probably not be as insulting to Othello, in that society he is the only black man surrounded by many white people he would have probably have got used to the insults by now, but also Shakespeare was a white man and probably didn’t think it was wrong to insult a black person.

Othello is seen as a foreign man to Venice, which gives Iago the chance to use this against him making Othello think he knows nothing and that it is almost religion to have an affair with another man.

“In Venice they do let God see their pranks. They dare not show their husbands. Their best conscience, Is not to leave’t undone but keep’t unknown” Page 68 Lines 204-206

This quote is telling Othello that even though Desdemona seems innocent the women of Venice hide their affair so well that the only person who knows is God and the other man. This might make Othello seem to feel more of an ‘outcast’ since he doesn’t know what the women of Venice do.

During the time Othello was written Black men had a particular stereotype.

“Southern men are more hot, lascivious and jealous, than such that live in the north: they can hardly contain themselves in those hotter climes, but are the most to subject to lusts.” Robert Burton, Anatomy of melancholy (1616)

This shows the attitudes towards black men, which is also shown in the book

The Green eyed monster was the original colour of jealousy and the monster was just the description of the creature telling Othello that this monster is feeding on him makes Othello more angry and also complements the stereotype of black men and jealously.

The whole scene is built up in a way that would make Othello believe that His wife is having an affair, although I think some parts are not believable, for example with the handkerchief and why Othello didn’t remember he told Desdemona to leave the handkerchief behind, but I also think that by this point he was so emotionally unstable the only thing he could remember was what Iago said to him and his wife. Also I do think it is a little strange that Othello didn’t take any reaction to Iago’s Insults and even if he was brought up in that society he still shouldn’t have been so unaffected but his insults. I do think he changed his mind to easily and that Shakespeare should have had done a bit more than just the handkerchief as proof to Othello.

With reference to act 3 scene 3, explain why Othello becomes convinced of his wife's unfaithfulness. (2020, Jun 02). Retrieved from https://studymoose.com/reference-act-3-scene-3-explain-othello-becomes-convinced-wifes-unfaithfulness-new-essay 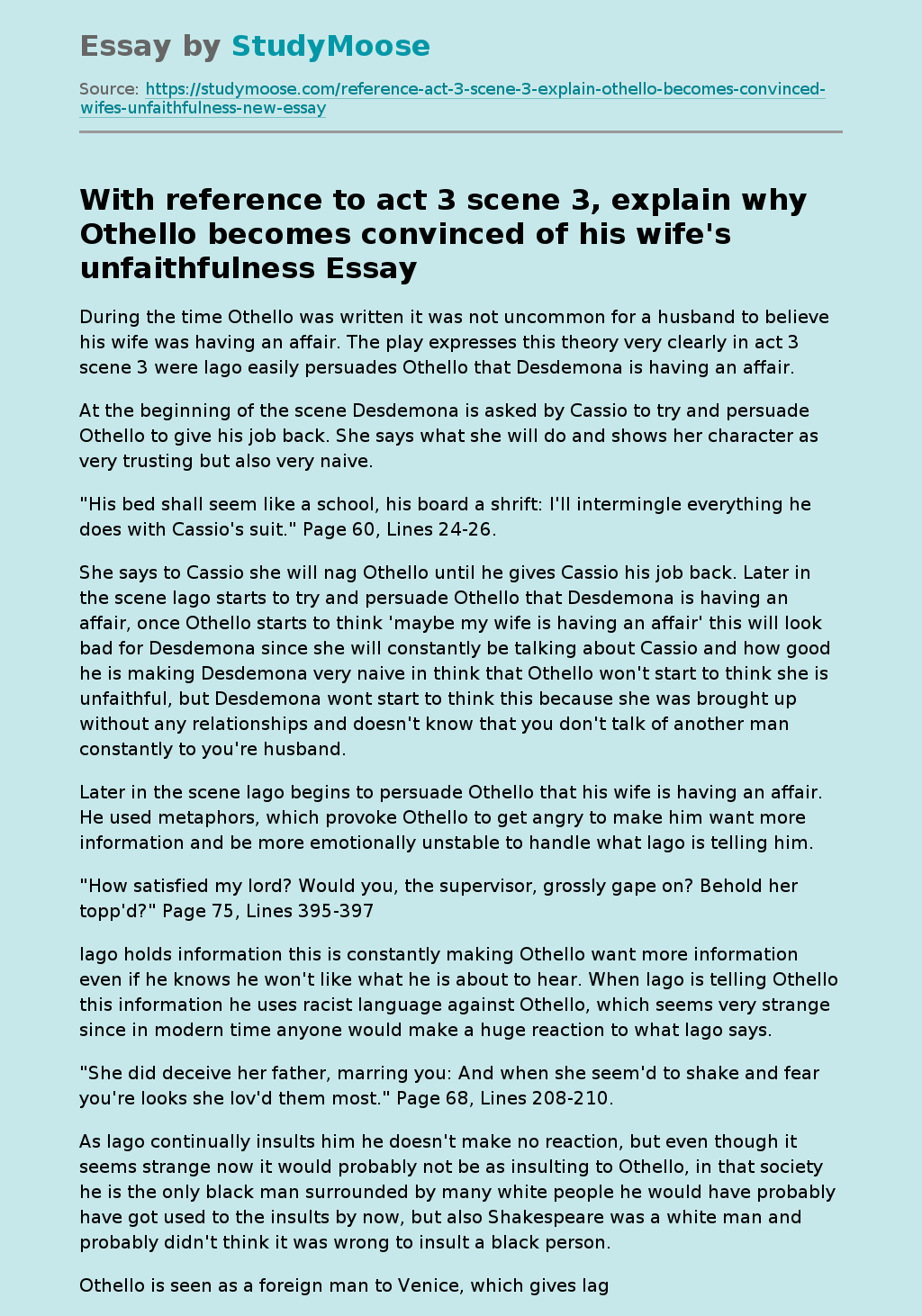