Wheeler-Feynman Quantum Theory and the Flight from Realism

For John Wheeler, defining the term “quantum” in his essay “How Come the Quantum” (Best 41-43) seems the least of his worries. It’s a “thing,” he says, “a bundle of energy, an indivisible unit that can be sliced no more” as Max Planck’s observations 100 years ago indicate (41). Wheeler’s words ‘thing,’ ‘bundle,’ and ‘sliced’ are interesting: they seem at once colloquial and correct for the usage Wheeler makes of them. Quanta sound friendly, everyday. The just-folks tone continues as he observes that, thanks to quanta, “In the small-scale world, everything is lumpy” (41).

Don't use plagiarized sources. Get your custom essay on
“ Wheeler-Feynman Quantum Theory and the Flight from Realism ”
Get custom paper
NEW! smart matching with writer

He moves his readers forward smoothly (no lumps) to the next topic, what existence of quanta reveals about the uncertainness of the world, a world where chance guides what happens.

In spite of this uncertainty, Wheeler continues, quantum physics serves both practical and theoretical ends. The theories involved in quantum physics explain atomic structures, starlight, the earth’s radioactive heat, and the travels of particles (which are waves of energy, it would seem) between neutrinos and quarks.

The vocabulary has gotten tougher; Wheeler clearly assumes his readers know what ‘particles’ and ‘waves’ mean when physicists use those “ordinary” words, let alone what they mean by neutrinos and quarks (41).

Enter the telltale ‘but.’ Wheeler seems troubled more by why quanta exist than how to define the quantum as a working concept in physics. He says, in fact, that “not knowing ‘how come’” the quantum shames “the glory of [its] achievements” in science (41-42).

From here Wheeler takes the reader back into the task of defining, or “interpreting,” the quantum.

First, he cites his teacher Nils Bohr, who proposed that the gap between the world of quantum physics and that of everyday reality might be bridged by the act of measurement between them. What is measurable, Bohr explained, is necessarily limited. Furthermore, continued Bohr, because of the theory of complementarity, one can look at a phenomenon one way or another—but not both ways at once (42).

Wheeler next turns to his colleague in physics, Albert Einstein, who could never accept Bohr’s “world view” even when Wheeler’s student Richard Feynman offered an explanation of Bohr’s ideas about the quantum. Feynman’s explanation involved multiple simultaneous paths of travel for electrons; Einstein could not reconcile this explanation, however, with his own ideas about the relations between God and His creation (42).

Then, in the 1970s Wheeler proposed the idea of “delayed choice” in the case of the paths photons (quanta) might take which retained elements of both Bohr’s and Feynman’s thinking. He got several colleagues at the University of Maryland to test and confirm his idea, which essentially describes making a choice about which one measurement to make while the photon is already in motion. The outcome of the choice, Wheeler concludes, is affected by the measurement technique selected, which is a matter of chance as far as the photon’s path is concerned (42-43).

He takes his reader back to the beginning of his discussion by pointing to the 100 years between Newton’s proposing his theory of gravity and Einstein’s theory of general relativity, which explained gravity in accord with Newton’s original ideas. And then Wheeler makes a very unusual move: he transports the reader to a garden in which Plato and Aristotle conversed more than three millennia ago.

He wonders if someday soon, his colleagues and he will not converse in a “virtual” garden and successfully answer the (for now shameful) question for science, “How come the quantum?” He says that he believes the answer to this question will also answer the question, “How come existence?”—a metaphysical question that is at once far removed from the scientist’s laboratory and totally at the base of all the ideas and questions one might pose about everyday life.

One of the most compelling aspects of Wheeler’s essay is the way he uses the rhetorical concept of ethos. He cites the important figures in the field of quantum physics and, more subtly, his relationships with nearly all of them. His argument is structured so that his own theory of delayed choice appears at the end of these citations, and is immediately confirmed by empirical testing.

Furthermore, Wheeler is attentive to the needs of the reader. Near the end of the “technical part” of his essay, he parenthetically defines the term ‘photon’ when he discusses delayed choice so that the reader may move steadily ahead (42), but he also almost lyrically describes early on the “lumpy” small-scale world that is quantum physics: “… When events are examined closely enough, uncertainty prevails; cause and effect become disconnected.

Change occurs in little explosions in which matter is created and destroyed, in which chance guides what happens …” before alluding to particles and waves as scientists use these terms to describe phenomena (41). The observation that “chance guides what happens” in this world helps the reader understand Einstein’s reservations about Bohr’s and Feynman’s explanations because, as most people know, Einstein held that God does not “play dice” with us or our world (41-42). Evidently Einstein’s God accompanied him into the laboratory, whereas Wheeler’s God remains outside in the realm of metaphysics.

So, from the rhetorician’s perspective, it is easy to conclude that John Wheeler does an excellent job of helping his readers comprehend how the quantum may be defined. He provides examples, a parenthetical definition, an historical discussion, and a clear description of the principle of operation that he sees underlying the term. He is a credible spokesman for quantum physics, and one who can speak to readers who, like me, are much more comfortable with examples and other definitional strategies than strictly technical discussions that only insider-type scientists can grasp.

Finally, Wheeler’s distinction between science and metaphysics helped me become more comfortable with the ideas one needs to juggle in order to grasp, however gingerly, the branch of science known as quantum physics. Thus I can delve more deeply into the topic via a book that has been awaiting my attention literally for years on my bookshelf—Fred Alan Wolf’s Taking the Quantum Leap: The New Physics for Nonscientists.

Wheeler-Feynman Quantum Theory and the Flight from Realism. (2016, Aug 24). Retrieved from https://studymoose.com/wheeler-feynman-quantum-theory-and-the-flight-from-realism-essay 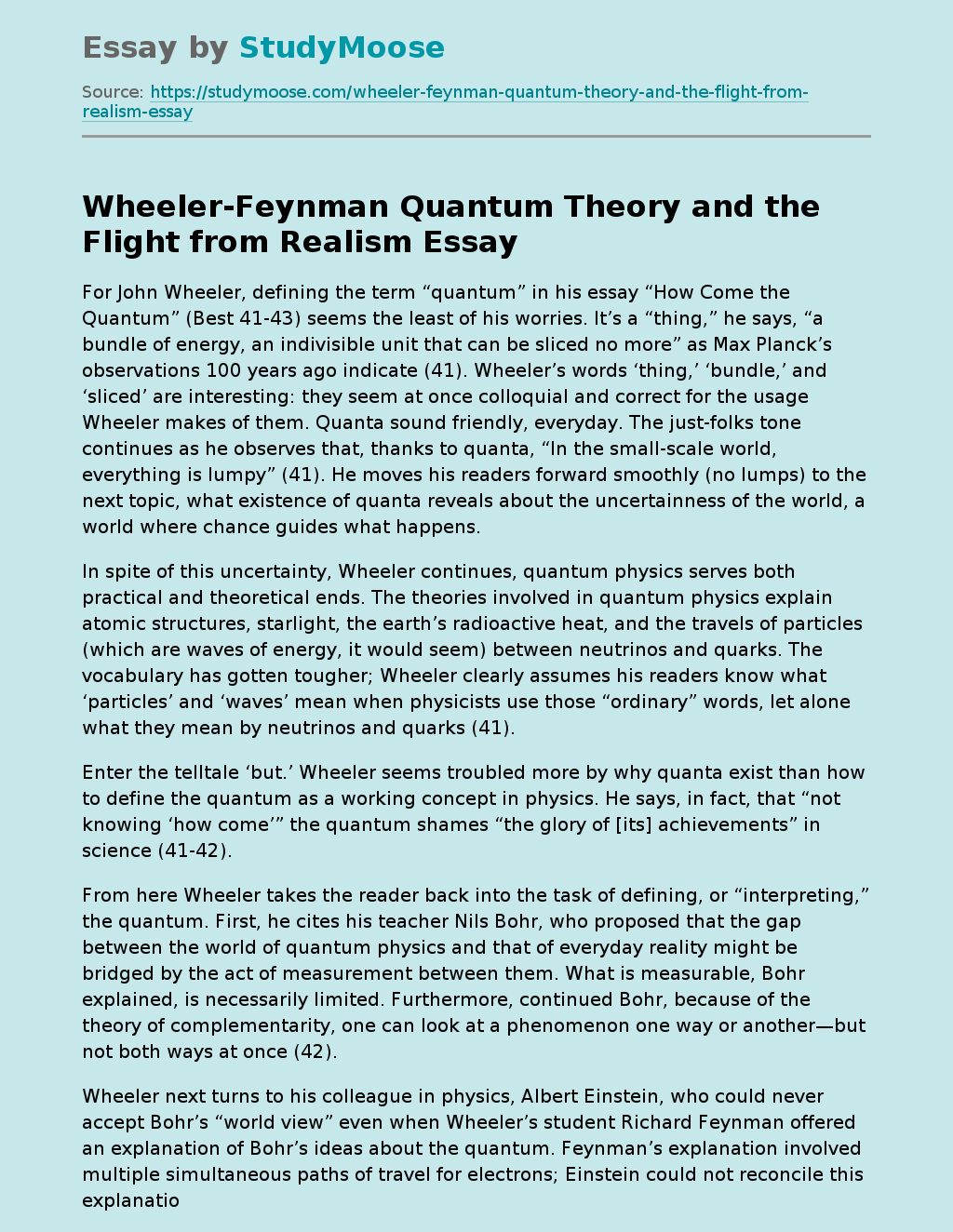