Comparison of 'flight' and 'your shoes'

“Flight” by Doris Lessing & “Your shoes” by Michele Roberts deals with conditions of growing up, relationship between generations and most importantly issues of daughter leaving home and how leaving house can affect the whole family.

The story “Flight” revolves around the grandfather who doesn’t want his only granddaughter, Alice to get married with love of her life, Steven as deep down he is afraid she will leave him and he might have to suffer from loneliness. In “Your Shoes”, a depressed mother imagines a pair of shoes to be her missing daughter who ran away from home after an argument with her father and is describing the memories she had with her daughter.

Don't use plagiarized sources. Get your custom essay on
“ Comparison of ‘flight’ and ‘your shoes’ ”
Get custom paper
NEW! smart matching with writer

Both the stories shares similar theme over daughter leaving home and growing up.

The grandfather in the beginning ignores the reality of children leaving away and he thinks selfishly discarding others happiness. This is because he had only seen his other granddaughters leaving home and they are not always there to stay by his side.

Therefore, he is severely affected by the decision of his granddaughter to get married. This is most clearly shown when he says. “She’s the last one, he mourned. Can’t we keep her a bit longer?”. Similarly, In “Your Shoes” the mother thinks she knows what is best for her fifteen years old teenager daughter who is getting involved in drugs and sex. She never considered her daughter’s feeling when she was present.

In “Flight” there is a relationship among the grandfather, granddaughter and her boyfriend.

He appears to be jealous of Steven knowing that he is going to lose his granddaughter to him as Alice is preparing to marry him. He also feels rejected when his granddaughter goes out him despite he being against it. By the end of the story we gradually see how he begins to accept the reality after seeing the maturity shown by Alice and Steven by gifting him a bird. It is then he realizes that she is no longer a little girl and she is growing up. Similarly, In “Your Shoes” there is a relationship between mother and daughter. The mother realizes she never really understood her daughter until she’s gone. “Now I realize how you kept yourself away from me, didn’t know you at all.”

This quote explains she was constantly rejected by her daughter because she was being overprotective all the time and never tried to understand her daughter feelings. The theme of jealousy is shown from the comparison she makes of her daughter with her mother. She didn’t get on well with her mother and now it is the same with her daughter. Like the grandfather, she doesn’t accept the reality of daughter leaving home. For example she shuts her daughter’s shoes in wardrobe and always keeps an eye on them. But at the end of the story, she feels a failure as a mother and thinks that her daughter will return which appears to be hope.

Languages used in both the stories are very descriptive of bodies and atmosphere to make it easier to understand. For example, “Above the old man’s head was the dovecote, a tall wire-netted shelf on stilts, full of strutting, preening birds”. This sentence from “Flight” (line 1) gives good description of the dovecote as well as natural behavior of birds which we are clearly able to visualize what is happening in the scenario. “Your shoes” is narrated in monologue from first person point of view .

Contrastingly “Flight” is narrated from third person point of view which is why it has dialogues included. The way story is told also makes differences in how recognize the characters. The narrator of “Your Shoes” is telling her sides of the story .We don’t know whether she is telling the truth or not and have no idea how the other character feels so she could be considered as an unreliable narrator. Both the stories have got their own good narrating style to allow the reader to connect with the character.

In “Flight” pigeon are used as imagery as it has the ability to fly away and leave .The use of this imagery suggest concept of children leaving home and getting married at their certain phase of life. In “Your shoes”, Shoes symbolizes missing daughter and the way she treats the shoes also describe her as she’s mentally disturbed and has become paranoid. “Hold you like my mother never rocked me.” This quote implies she is holding it like a baby imagining she is holding her daughter and is trying to show her love she didn’t get from her own mother.

Both the stories enlighten a message that growing up as we see it is not simple as it seems. It is more than that. It is as complicated as this world seems to be. Like In “Your shoes”, daughter running from home affected her mother but we can’t blame the daughter as it is her parents who have failed to understand her and take her in right track. And in Flight grandfather realises his mistake and repent it by accepting his granddaughter’s new relationship. This is a result of children showing more responsible side. Both the stories give us idea that as we grow up we start to develop relationship, go through happiness and sorrows and decisions that sometimes might affect our loved ones and bring profound changes in lives.

Comparison of 'flight' and 'your shoes'. (2017, Nov 07). Retrieved from https://studymoose.com/comparison-of-flight-and-your-shoes-essay 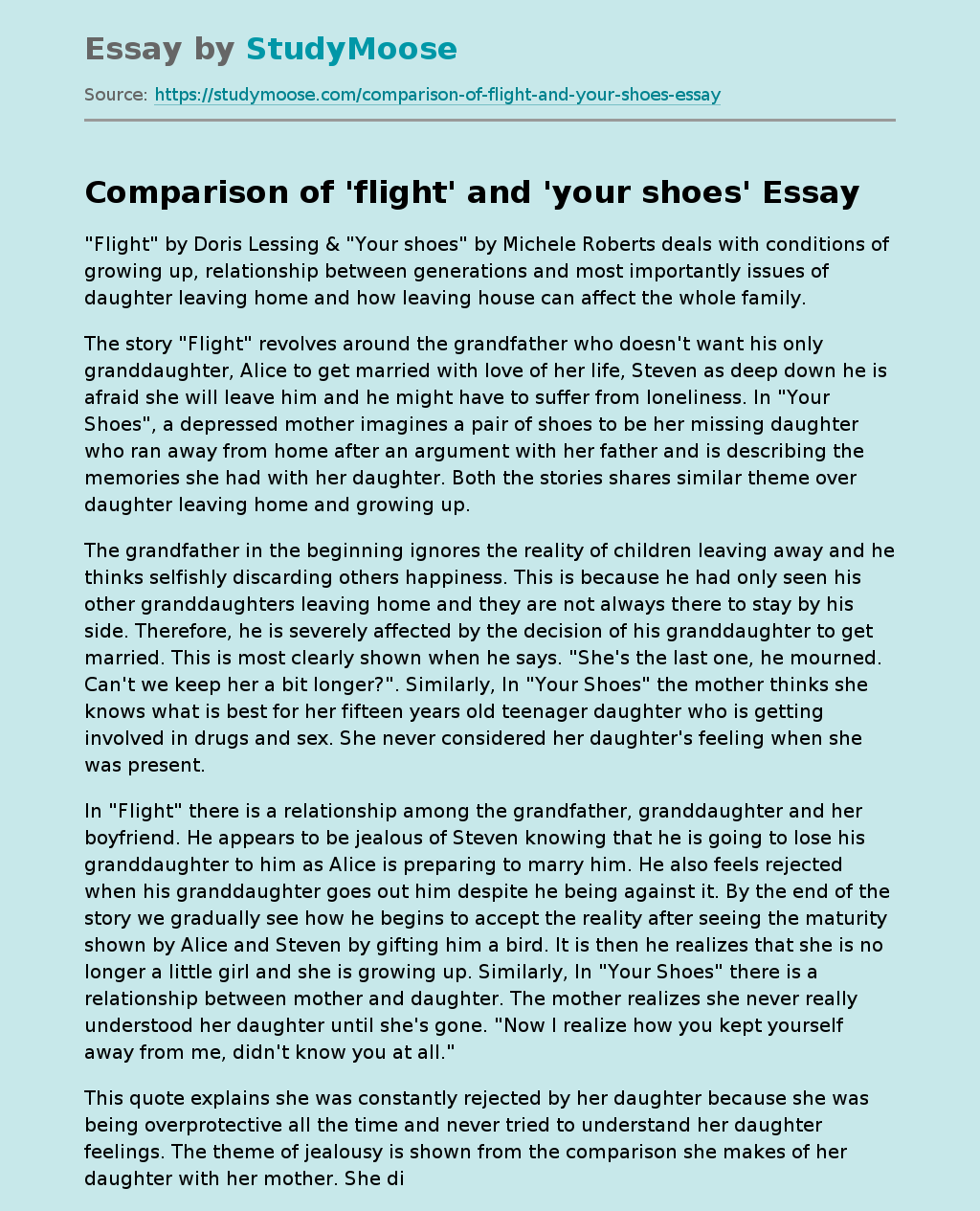