TOMS is an American footwear and eyewear company that was founded in 2006 by Blake Mycoskie after a trip to Argentina. The main reason why he founded the company was seeing the poverty and the condition of people in villages in rural Argentina. Mycoskie’s sole mission for conducting business was based on the idea of creating this for-profit footwear company where every pair of shoes that were purchased, a subsequent pair of shoes would be donated to a child in need.

Don't use plagiarized sources. Get your custom essay on
“ TOMS Shoes and Social Enterprise Theory ”
Get custom paper
NEW! smart matching with writer

Moving on to the social enterprise theory, we define a social enterprise as “an organization that applies commercial strategies to maximize improvements in financial, social and environmental well-being”. As indicated earlier, TOMS is a for-profit company but it has a non-profit subsidiary called Friends of TOMS so we can see that it combines a mix of different profit philosophies to achieve its goal to serve the poor and needy. A lot of people questioned Mycoskie’s approach of this social venture indicating that he is trying to make money of the poor and that the business does very little to identify the root causes of poverty but what is important to keep in mind is that along with TOMS shoes, there is a subsidiary non-profit that donates a pair of shoes to the poor and needy every time someone buys a pair through TOMS’ website.

Today, the company is worth at a staggering $400 million after serving over a million customers.

Even though TOMS shoes has had its fair share of criticism and issues, looking at all what it has managed to do till date, it fits in perfectly to what an ideal social enterprise is since it combines financial (for-profit company where it earns most of its revenues from), social (donates a pair of shoes after every purchase of a pair to those in need) and environmental well-being (they feature a line of shoes that are made entirely out of recycled materials) so we can definitely see that TOMS shoes is a highly performing “social enterprise” that has had to change a lot of ideas and thoughts after severe criticism and comments from the public.

Furthermore, going forward to the theory of change, we define it as “a specific type of methodology for planning, participation, and evaluation that is used in the philanthropy, not-for-profit and government sectors to promote social change”. TOMS’ Shoes Theory of Change is first of all, the idea of serving the poor in rural parts of Argentina with shoes designed in a way that were common to the Argentinian tradition (Alpargata) along with the Argentinian flag incorporated into the TOMS logo so that customers were aware of what they were going to purchase and secondly the idea behind the whole strategy of donating a pair of shoes to the needy when one pair is purchased. This is something that is unheard of and not common amongst social enterprises. The idea behind TOMS that gives others is very appealing and since people these days are so money minded, it matters a lot of them where they are spending their earned income and the fact that TOMS does such a charitable job would only make it much more enticing for people to purchase its shoes. This idea is what caught the eye of everyone and slowly and steadily, TOMS started to expand and hence is known worldwide today.

The only possible flaw/weakness that I would say is the attempt to make money out of the poor which was talked about by a few critics but Mycoskie argued by mentioning that his plan involved sustainability in the long run and therefore, he had the whole idea of starting a charity in mind before he even thought about TOMS shoes.

TOMS Buy-One Give-One Model is something that initially caught the eye of everyone. As mentioned earlier, this was something that was largely unheard of and the fact that people are so conscious and money-minded that they want to know where every dollar that they spend goes to. The idea behind them indirectly helping a poor person in desperate need of shoes is eye-catching as well as satisfying for the customer. The model has a lot of opportunities to flourish in various market globally. For instance, famous eyewear retailer Warby Parker has adopted this model where it gives a pair of eyeglasses to those in need whenever someone purchases one pair. It has so far donated over a 100,000 pair of glasses. Furthermore, young enterprises such as Soapbox Soaps and Two Degrees Food have also replicated this famous buy-one give-one model to conquer social issues such as poor hygiene and childhood hunger. Apart from this, a few online platforms such as Roozt and Given Goods host hundreds of brands that use a similar approach.

The main benefit that this model has is that first and foremost, it is easy to understand and replicate and secondly, it can be applied to other markets and business types. According to some research conducted, the buy-one give-one model is a great way to create both commercial and social value since it is a model that also “increases in prevalence and power”. As mentioned earlier, the trend in consumer behaviour observed is that millennials place a really high value on social issues so the fact that this model helps someone in need is something that a lot of customers’ care about and hence I would say that such a business model that is easy to understand and replicate, has a lot of potential in other markets globally.

Despite the fact that the buy-one give-one model has a lot of opportunities and had success in different markets, it has had its fair share of criticism. As I had mentioned at the start of the analysis, a lot of people have raised questions about the actual social impact of such a model indicating that it “only alleviates the symptoms of the problem” (in the case of TOMS shoes, it means just providing shoes to those in need rather than finding the root cause of the problem and trying to solve that). Even though this is a vital issue, we do not address the question of social impact that is how to find the main cause why this issue persists. Instead, more focus is diverted to what the model itself is and how its long-term financial sustainability comes into the picture to understand whether this model is an effective way that new businesses can look up to and possibly incorporate in their business to create greater value on a commercial as well as social level.

In addition, the other challenge that looms is that having multiple companies in one market segment makes it difficult for customers to understand what the company’s actual mission is. For example, TOMS shoes expanded into eyewear and replicated the same buy-one give-one model that for every pair of glasses bought, one pair would be donated to those in need. Here, what is important to keep in picture is that people would assume that TOMS is just trying to expand and get bigger and bigger and in turn, generate greater revenue and profit rather than help a social cause and that’s why customers would doubt its operations and be suspicious of the overall concept of the buy-one give-one model.

All in all, we can say that TOMS shoes is a highly performing social enterprise that fits well within the definition of what one would call a social enterprise. It does have its flaws and people have constantly questioned its operations and specifically its buy-one give-one model but according to the case and information available online, it is worthwhile to give credit to how it has helped millions of people in more than 70 countries with shoes and eyewear. The buy-one give-one model has been talked about a lot due to its benefits but as indicated earlier, it does have its flaws. Keeping that in picture, looking at the statistics, and not focusing too much on what others have talked about, we can conclude by saying that TOMS is a highly operating social enterprise that values its social mission and works towards fulfilling it. 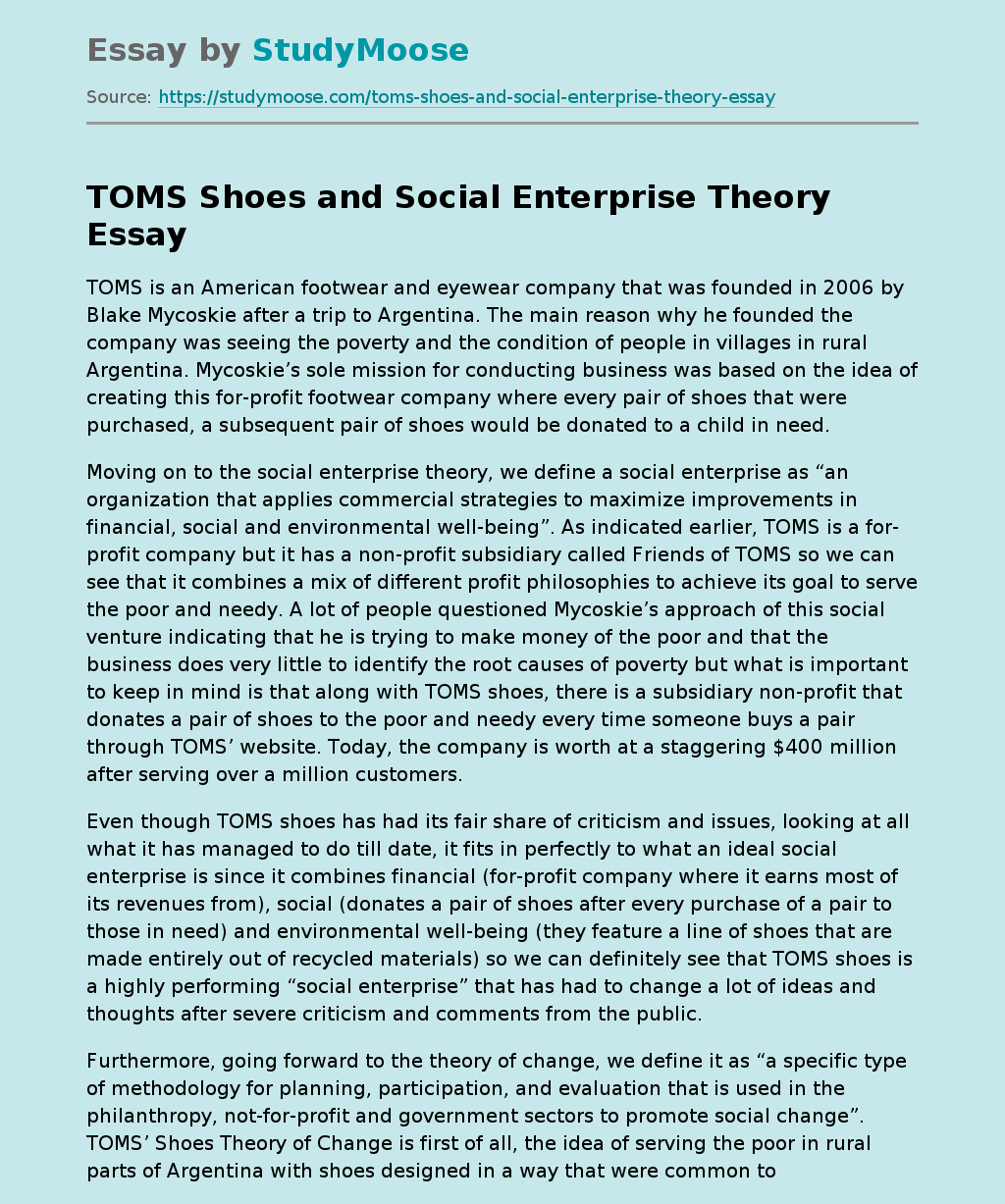