Company management requires to know the opportunities for new markets and new products, necessitating the need to expand product lines in this process, Janes Karvitz, strategic production took up Lyndon in her team and now facing problem with his attitude at work and trying to motivate him to finish his assigned work About organization and employee designations:

Jensen Shoes is an American company which is specializing in athletic and casual shoes for both adults and children The hierarchy of the employees is as follows:

Present situation of the company :

About Lyndon and Jane Kravitz:
• Lyndon Twitchell ,a staff member in Jane’s team, and was given two strategic objectives (s.

Turn in your highest-quality paper
Get a qualified writer to help you with
“ Jensen Shoes Company ”
Get high-quality paper
NEW! AI matching with writer

o.’s) to complete i.e Latino and African American market. • In addition to it, he was assigned a third project on environmental issues at the same time.

• Lyndon has not been able to fulfil his strategic objectives under Chuck while he was in a management position. • After been transferred to Jane’s team, he tried to take a week to fly to the west coast and attend a trade show. • Twitchell and Jane came to an agreement that Twitchell would be responsible for only one strategic objective and they signed a contract to record the same.

Pre-assumptions by Kravitz and their effect on her behaviour: The case reflected the fact that Janes took up Lyndon in her team and now facing problem with his attitude at work.

Karvitz was already informed by Chuck that Lyndon is a guy who is difficult to handle in terms of work, This corresponds to the social information processing model , in which people adopt attitudes and behaviours in keeping with the cues provided by others with whom they come into contact. With this perceived information, she pre assumed that she can motivate and put him in to work, because she though Chuck is quick at deciding and so did not actually accepted the fact.

The pre assumption brought changes in Janes behaviour and attitude towards Lyndon Brook. She, thinking that giving moral support can actually motivate Lyndon .Apart from this ,she personally experienced working with Lyndon and realized ,he has many great qualities of being professional, charming and the capability of solving problems . This extra care that Jane took, may be the reason Lyndon took advantage and planned a business .

A pictorial SWOT analysis has been shown below:

Flattening sales of casual wear
Competition from others in market

In case it was mentioned that, Lyndon was rude to his boss. When Kravitz called Lyndon to her cabin to have a formal talk, he left abruptly without even giving proper answer to Kravitz. Lyndon here did a selective screening. He did not bother what Kravitz is actually trying to communicate. He spoke just what he wanted to and left the cabin. Kravitz analysed this behaviour of Lyndon is due to the fact of career development desire, once he used to be in a position under Chuck. So, she promised Lyndon, that she will talk with the management to offer him a better position. This somehow created a little chance to talk to Lyndon. She even planned informal meets to make ease for Lyndon.

Lyndon performance was analysed by Chuck previously. And he remarked negative on his behaviour. Lyndon actually performed excellent in few of his projects assigned. He did not make out most of them good. Chuck may be focusing on only unfinished projects while evaluating Lyndon’s performance. Also being quick decision maker, he may not actually try to figure out the problem of Lyndon. This might be effected Lyndon in a negative way, that he was mistreated by his boss and remarked bad before all other colleagues. And thus is the reason for his resistance to the words and suggestions by Kravitz, feeling that he will anyways be not recognised for his work.

The first alternative is to avoid pre assumptions. Kravitz would not have provided special treatment only to brook ,which he in turn realised it. He thought that he was treated separately distinguishing from other staff might be due to the negative image he has. So, it would have been much comfortable even to Lyndon, when considered equally with the remaining two people. This can bring him the feel of normalness while working. A part from this Kravitz should not follow projection methodology by expecting the same she feels at her work from her staff. The second alternative can be from the side of Lyndon. Lyndon should not have self-serving biasness. He is actually not accepting the internal faults but over estimating the external factors he was being influenced. This made him to deny the responsibility of finishing the so’s in time and even planning to a trip in unsuitable circumstances.

The above alternatives can be viewed when Karvitz did not demonstrate fundamental attribution error. She can encourage Lyndon for his finished works and recognize him for the best results .She can give continuous reinforcement so that she can derive the desired behaviour quickly possible. Lyndon should also inculcate self-efficacy and try to help Karvitz in finishing the s.o.’s in time. He should avoid the negative thoughts of over burdening and extra works and be enthusiastic at finishing his job. The third recommendation in order to improve the situation is that the management must be realistic in allocating work to employees and Jane Kravitz must be bold enough not to accept a work if she found it very unrealistic and tough to finish.

Too high self-esteem can prove to be counter-intuitive at times. While throwing birthday parties is fine, continuous reinforcement through extrinsic rewards and recognitions of the work been accomplished by employees can be more encouraging. Experimentation can be made using negative reinforcement, when positive reinforcement fails to work. The fear of losing job can increase the likelihood of desirable behaviour. 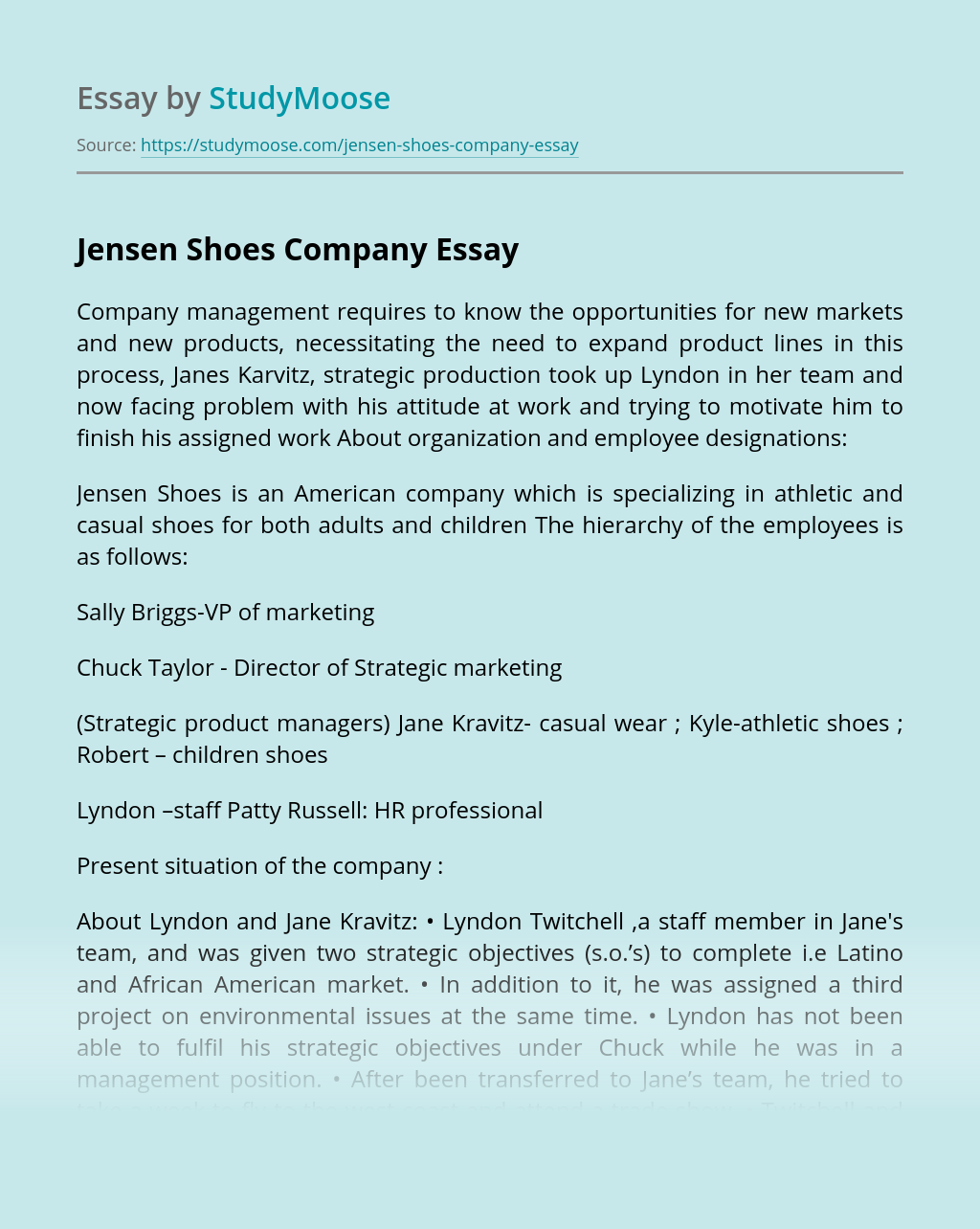 Turn in your highest-quality paper
Get a qualified writer to help you with
“ Jensen Shoes Company ”
Get high-quality paper
Helping students since 2015
Stay Safe, Stay Original