The essay written is about the excerpt “What’s Your name, Girl?” and on how Marguerite Angelou shows the importance of names. There are many way on how our names serve us. One of the most visible ways a name serves us is that it gives us personality. In the story read, there was emphasis on African American names and the true meaning behind the passage.

To start off with the essay, the main point has to be stated. In the case of this small piece of literature that was provided for the subject of the essay, the clear picture can be noted when Mrs.

Don't use plagiarized sources.
Get Your Custom Essay on Whats Your Name, Girl? Just from $13,9/Page

Cullinan was having a conversation with a freckled face women in which she suggest chaining the narrator’s name to Mary. This can be seen throughout the conversation of the two women which starts on page nineteen and starts to explain the scenario “What’s your name, girl…I’d Call her Marry if i was you”.

The main principle of the story is to show the reader the life that was endured to African American women in a time of segregation within the limits of Arkansas. The lady’s conversation later proves to be the defining moment when the older “negro” speaks bout her named being changed to Glory even though her birth-name given by her parents was Hallelujah.

The story was well put together and written in a way where you have to finish the whole passage in order to understand the severity of the situation the author had to be as a adolescent. If there was less emphasis on the one on one conversation and Angelou was not able to recall with astonishing detail her accounts, then there would have been a great loss of understanding by the reader. Because of the novelist’s ideas were vivid it allowed me to look deeper into the work and help me understand the underlining message of the story.

The story that was read for his project was fully encompassed on the idea that: names are the importance for thus specific piece of literature. The main goal of the writing can be deified as for us to recognize the names of these women in the story and see why there was passion and feeling in the words. The idea of someone name being changed by their boss or owner at the time is revolting. It seems to be the main idea that Angelou is trying to portray in the novel and we can see evidence of this from her words. “For a few seconds I was a toss-up over whether…(convenience)” (Angelou 21) . This small quote shows the pain of the little girl and of the older lady in the novel. Miss Glory was hurting from her name being changed but accepted it and in a way was trying to comfort “marry” by showing her that the same was done to her.

They explain what it means to be “called out of name” in the thirtieth paragraph where it basically states that all named are valuable and the defacing of one’s name can mean many different things. For example meaning of the action taken by Viola of changing Hallelujah and Marguerite names specify the control of power. The white lady had the power to change the names so she did, and in response these people are now left with the feeling of a certain devaluation towards their personality and character.

All in all the story was able to capture many view on how the idea of names goes deeper than just the words. Our experience with interaction counts on us to remember our names and in the story it showed a dark side of human engagement where feelings aren’t mutually shared. The author’s job was seen to be very encouraging because it contained the abilities to allow the reader to develop a position and find supporting evidence to backup claims. 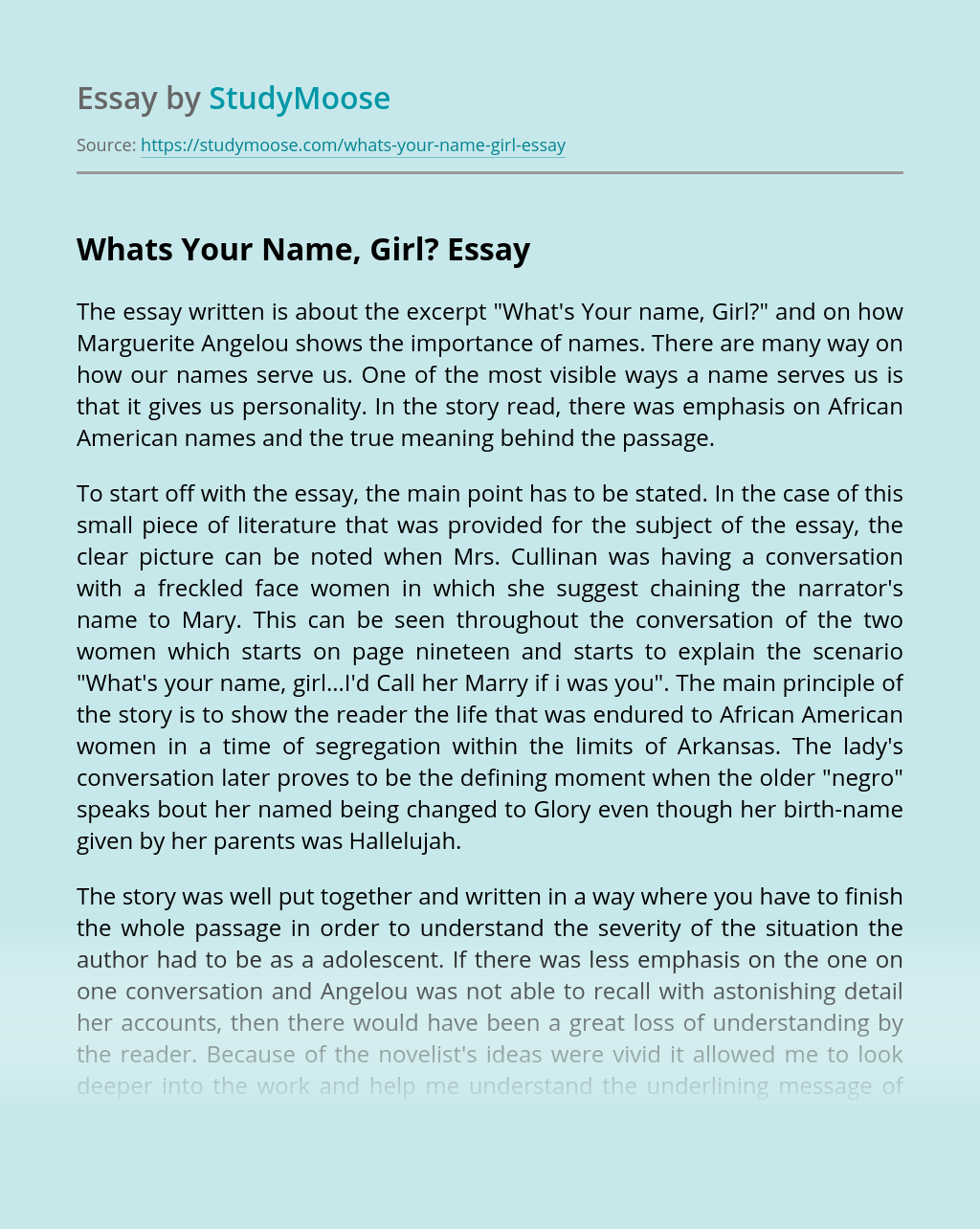 The Dawes Plan 1924 was point by point to expel Weimar Germany from hyperinflation and to reestablish Weimar’s economy to some kind of relentlessness. The Dawes Plan definition tells it got its name as the man who headed the leading group of trustees was an American called Charles Dawes. The Treaty of Versailles had constrained...

Continuous professional development (CPD) is a framework of learning and development that ensures a professional’s competency, effectiveness, knowledge, skills and practice are continually kept up to date through ‘lifelong learning’ strategies and activities. There is not a fixed CPD standard or structure and a ‘one size fits all’ process would not work for all professions...

Drug is a substance that causes addiction, and it’s prohibits to treaded or grown or manufactured it only for some purposes prescribed by law. Drug addiction is one of the major problems In society. The effects of this disease are really serious. Many people get used to have drugs. Therefore, they get easily addicted to...

"A Grain of Wheat" by Ngugi wa Thiong'o

The idea that sacrifice is required before Kenya attains true nationhood, is one of a range of ideas – others being birth, betrayal, heroism and forgiveness – in the novel “A Grain of Wheat”, by Ngugi wa Thiong’o. It is conveyed through the words and actions of many characters (especially Kihika, Mugo and to a...

Associated with sophistication ever since James Bond first ordered a vodka martini “shaken, not stirred,” vodka has enjoyed tremendous success over the decades leading up to SVEDKA’s debut. The vodka-enthusiast women of the hit HBO series Sex and the City provided renewed energy for vodka in early 2000, just as the more-than-40-year bump Mr. Bond...