Macbeth and the Porter

In William Shakespeare’s Macbeth, the characters are very unique and diverse. One of the most intriguing characters is the Porter. While the Porter appears for only one scene in the entire book when he is drunk while talking to Macbeth, he adds another layer to not only himself, but also Macbeth’s character. Fredric B. Tromly claims in his article, Macbeth and His Porter, that the Porter’s representation is a common misconception that is made. He backs this up with evidence that the porter has a greater significance to the understanding of Macbeth then the people often make him out to be.

Don't use plagiarized sources. Get your custom essay on
“ Macbeth and the Porter ”
Get custom paper
NEW! smart matching with writer

Tromly’s article is strong and well supported because of how his arguments relate and connects with the text of Macbeth.

Tromly’s first argument that relates back to the text is that the Porter and Macbeth have already had a relationship together. The argument itself I heavy based within the text of the book and Tromly looks at the implications that are made very closely.

“The Porter’s covert relationship to Macbeth is sustained through the final flurry of equivocations.” He supports this by using the text. “Macbeth. I believe, drink gave thee the lie last night. Porter. That is did, Sir, I’ the very throat on me: but I requited him for his lie; and I think being too strong for him, though he took up my legs some time, yet I made a shift to cast him.” His argument communicates that the Porter, in regards to the passage, has an established relationship with Macbeth.

As we can see in the text, some kind of relationship is already established with the Porter and Macbeth when Macbeth says, “drink gave thee the lie last night…” Macbeth didn’t ask who he was, what is he doing, or why. It shows that the Porter and Macbeth have already had a preexisting relationship with one another. This argument is strengthened due to how it does not contradict anything within the text while also being supported.

Many parallels can be drawn between Macbeth and the Porter. The Porter is used to draw comparisons between being drunk and being evil. the Porter and his problem of drinking are direct parallels to Macbeth’s problems and his evil desires of murder and tyranny. The Porter literalizes the images; he has been intoxicated, has overslept, and is now hungover. This is probably the strongest argument he makes, as the evidence is undisputable. The Porter is in the book for a reason, not for comic relief, but rather to give a reflection on Macbeth and the situation. Shakespeare was a very intelligent man, he would not have utilized a character in a unless manor, it had a purpose. The Porter, on a second glance, does not fulfill the role of a character made to make people laugh. This is a tragedy that takes itself very seriously and very little comedy elements are in put into Macbeth. Instead, the Porter is a result of brilliant writing. His purpose in this scene is to be used as an analogy for the readers to understand Macbeth’s feelings.

Macbeth and the Porter. (2021, Apr 25). Retrieved from https://studymoose.com/macbeth-and-the-porter-essay 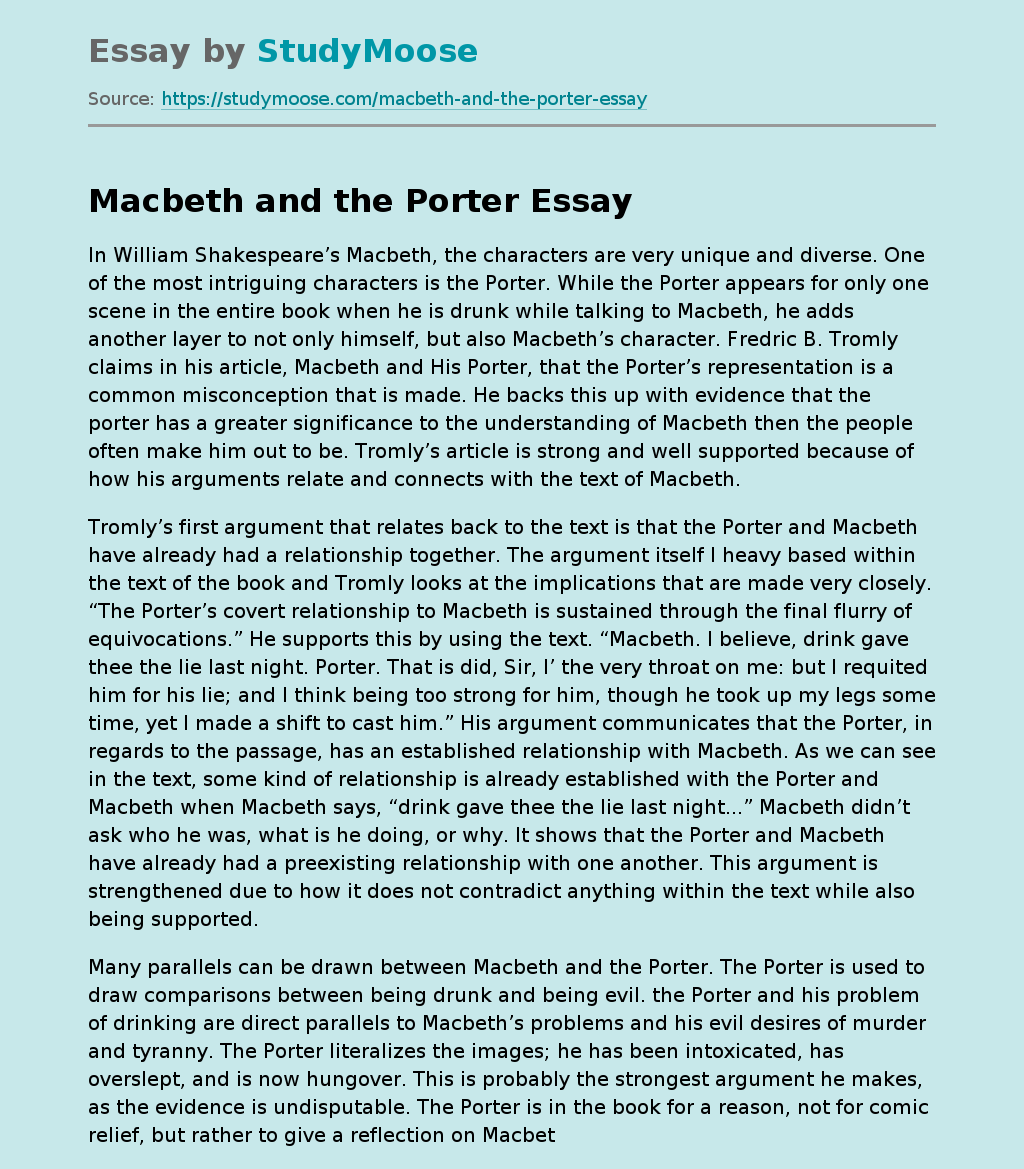