In researching poet, Maya Angelou, I was able to explore her personal life, as well as her writing styles and techniques. While she is an extraordinary individual, she portrays a strong independent woman capable of holding her own. A great experience in learning about Angelou, the project itself I found to be rather droll. Having to find criticism about one of the worlds greatest poets, was extremely difficult. The assignment was also time consuming, and I found myself often wondering why everything needed doubles.

Don't use plagiarized sources. Get your custom essay on
“ Maya Angelou ”
Get custom paper
NEW! smart matching with writer

While the information gathered for this project focused on Maya Angelou was engaging, the task in analyzing the poet rather than the poetry, was prolonged and monotonous.

Maya Angelou is one of the universe’s most controversial poet. Her fascinating life experiences and thoughts translate beautifully onto paper, and her literary elegance captivates many. In the assignment given, it was asked that two pieces of literary criticism were found. When researching such a profound writer, it was impossible to find complete critical analyses of Angelou’s work.

The only thing that was found were rotten comments on a forum, or a general summary of a poems meaning.

Undertaking this assignment was very tedious, for even after finding some sort of “analysis”, it was asked that one write their own poems. This was very difficult for it was difficult to decipher what was really being asked. The expectations were not clear in the way where one should have been writing like their chosen poet, or to write as themselves.

Either way, the poems produced in my own assignment, were just thoughts on paper. While Angelou has no set schemes in her work, the self-fabricated poems made, were also set up the same.

While it is believed the more that is researched, the more that is known, how this was conveyed in this project was not straightforward. Everything that was assigned, needed to have two or more examples. Whether one chose to look up two biographies and two literary analyses, or two literary analyses and original poems, the duplication in finding two examples was unnecessary. The message could have been depicted through one example each. Finding the information grew to be mundane, and how all of the details found would be gathered into one essay was perplexing. While I believe finding two biographies would be vital if one were to be writing a biography on the poet, It’s almost pointless when you must narrow down the information into a paragraph. Same for the literary analysis. The original poems written almost had nothing to do with the project, which didn’t make much sense.

Learning about Maya Angelou was enlightening, and this project allowed me to view her work in a different light. She is able to shine a strong light on herself that sets her apart from the rest. Unfortunately, this assignment didn’t allow more of an assessment on one poem, for one paragraph is not enough to correctly articulate her notions. The project could have been absolutely successful if it had not repeated so many steps in finding the same information in separate places, or writing irrelevant and original poems. In the future, an essay based solely on one poem by an author, with only a paragraph of biographical information would benefit the student. This would allow oneself to look more into the poets techniques, schemes, and deeper meanings. 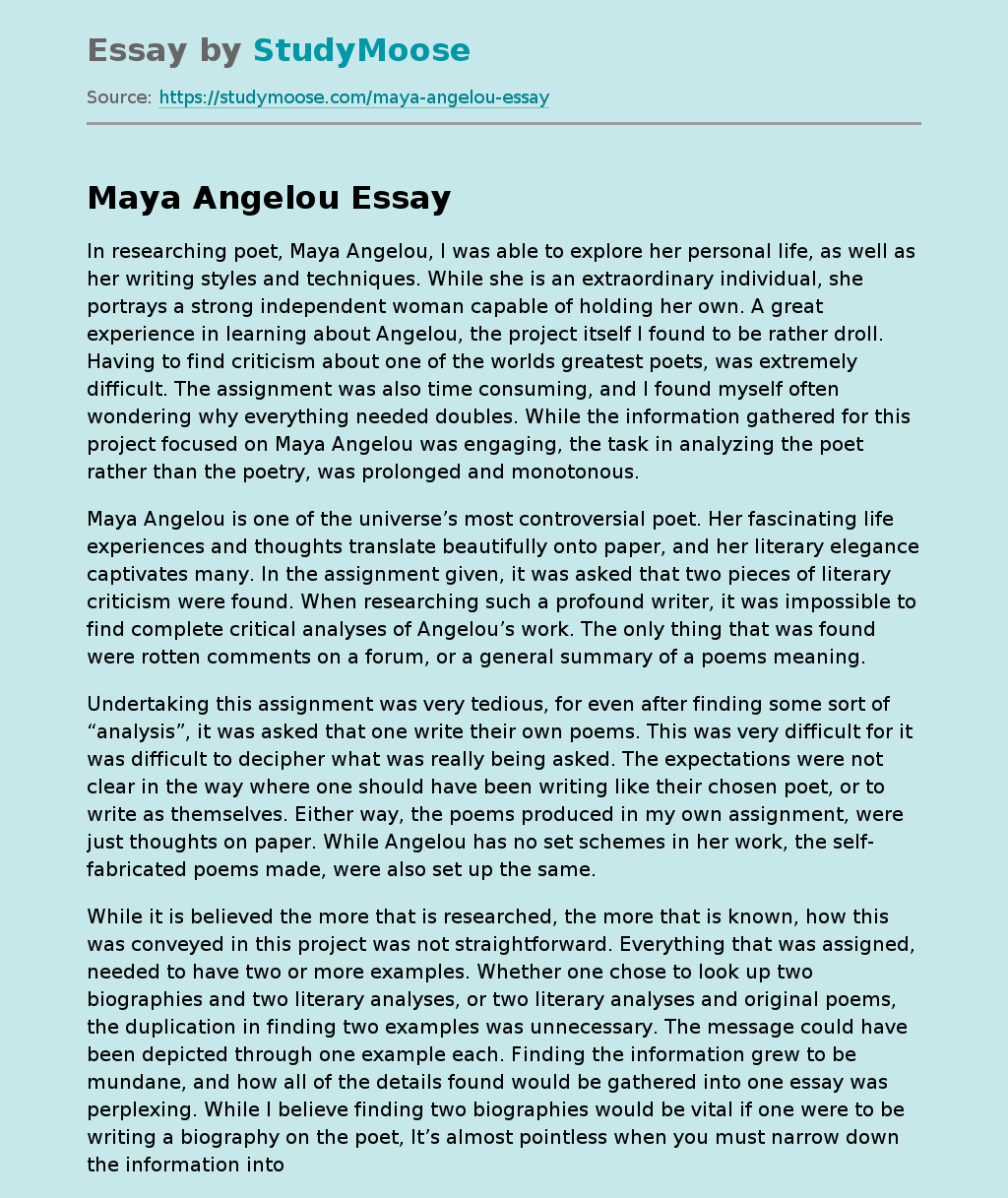