What Is The Significance Of Boo Radley?

Boo Radley is essential to the book “To Kill a Mockingbird” because he is a catalyst for many other things to happen through out the book. For example he allows the reader to see what the mentality of some of the people in Maycomb. For example Miss. Stephanie Crawford, who demonises Boo as a monster and also a large proportion of the community who, for example, will not eat the nuts produced by the tree on the Radley’s property as they will be poisoned.

Don't use plagiarized sources. Get your custom essay on
“ What Is The Significance Of Boo Radley? ”
Get custom paper
NEW! smart matching with writer

“Miss. Stephanie Crawford said she woke up in the middle of the night one time and saw him (Boo) looking straight through the window at her” Boo Radley also aids the relationship between Jem, Scout and Dill as they are united with one main objective, which is to make Boo come out.

Harper Lee uses Boo to show the reader the gossip and attitude of the towns-folk towards people, or things, they do not understand. This can also be applied for the prejudice in the town towards black people using Tom Robinson.

As the reader starts to move through the novel we can see where the title came from (“To Kill a Mockingbird”). Harper Lee chose this title wisely as it is a metaphor for the theme of the book. She chose this name from a passage that Atticus said to Jem when he was given a rifle: “Shoot all the bluejays you want, if you can hit ’em, but remember it’s a sin to kill a mockingbird”.

He is referring to the notion that a mockingbird is a harmless creature that does nothing all day long but “sing its heart out” to bring happiness to the world. At the end of the novel Scout says “to tell about this (killing Bob Ewell) would be like killing a mockingbird.” Here she is relating Boo to a mockingbird because he has done no harm to anyone and only helped to save Scout and Jem’s lives. This shows another major thread of the tale, which is the development of Scout and Jem.

Jem matures earlier than Scout and we can see the beginning of this process when he enters the Radley’s back yard and loses his trousers attempting to get out through the fence. It is not this that triggers the realisation off but when he goes back to the scene to retrieve the torn trousers when he discovers that someone has sewed the rips up and left them folded up on the fence for Jem.

“They’d been sewed up. Not like a lady sewed “em, like somethin’ I’d try to do. All crooked.” The reader is forced to make the assumption that Boo has sewn the trousers up and that is why Jem “stayed moody for a week”. We also see that Boo has been leaving small gifts for the children in an empty knothole in a tree in the Radley place. When the knothole is filled up and the only contact to the outside world for Boo has been severed the reader sees that Jem cries: “”¦I saw he had been crying; his face was dirty in all the right places”. This is more prove to show that Jem has matured to the state where he can see the correct character of Boo instead of the rumour version. Though Jem has this insight into Boo’s life he still does demonise him as we can see when he is teasing Scout about Boo wrapping the blanket around her on the night of Miss. Maudie’s fire: “He sneaked out of the house ” turn “round ” sneaked up, an’ went like this!”.

Jem may still demonise Boo in this way because it would be too difficult However, towards the end of the novel we can see his demonising turns to empathising: “”¦why can’t they get along with each other”¦Scout, I think I’m beginning to understand something. I think I’m beginning to understand why Boo Radley’s stayed shut up in that house all this time”¦it’s because he wants to stay inside.” Scout’s realisation of the truth about Boo Radley does not come over a prolonged period of time as Jem’s did, but all at once at the end when she walks Boo back to his front porch.

We can see proof of her realisation when she “stands in Boo’s shoes” and sees everything over the novel from Boo’s perspective: – “Summer, and he watched his children’s hearts break. Autumn again, and Boo’s children needed him.” This side of Boo that we see here through Scout’s eyes is very different to the false Boo made up by the towns-folk such as Miss Stephanie Crawford. This also ties in with another theme in this book: “Atticus was right. One time he said that you never really know a man until you stand in his shoes and walk around in them.” This is very ironic in that the demon becomes the saviour for the children.

This passage that Scout says includes all of the seasons of the year. Harper Lee includes these seasons here to indicate the emotional change that the children have been through concerning Boo and therefore their general mature attitude to life very much like there father, Atticus and also their cook, Calpurnia.

We also see that the two main story threads dovetail at the end of the novel and ties the plots together elegantly. The children at the beginning of the book were obsessed with trying to make Boo come out. The story left Boo and went to Tom Robinson’s trial for the middle section of the book and then at the end the deranged Bob Ewell’s attempt to kill the children forced Boo Radley to come out. This action by Boo is a very poignant part of the book, where even though Boo is a physically weaker man, he shows no fear when it comes to protecting Jem and Scout’s life. Harper Lee also tries to reach out to the reader by telling: “”¦and shut the door behind him. I never saw him again”¦.we had given him nothing, and it made me sad.”. This feeling that Scout emits is very saddening in the way that it is too late to pay Boo back for what he had given the children.

Boo does not show up only the bad qualities in the town’s society but also the good and rational side to it. At the very end of the novel, after the children have returned from their altercation with Bob Ewell, we see the sheriff, Heck Tate, vindicates Boo for the crime. He does this on both legal grounds and also moral grounds. Legally Boo prevented another, potentially more serious crime from occurring and also morally because of making Boo’s rescue public. Ironically, if this were to happen then Boo would receive all of the town’s attention and this is absolutely what Boo does not want. And also what Scout says, which is: “to tell about this would be like killing a mockingbird.”

What Is The Significance Of Boo Radley?. (2016, Jul 16). Retrieved from https://studymoose.com/what-is-the-significance-of-boo-radley-essay 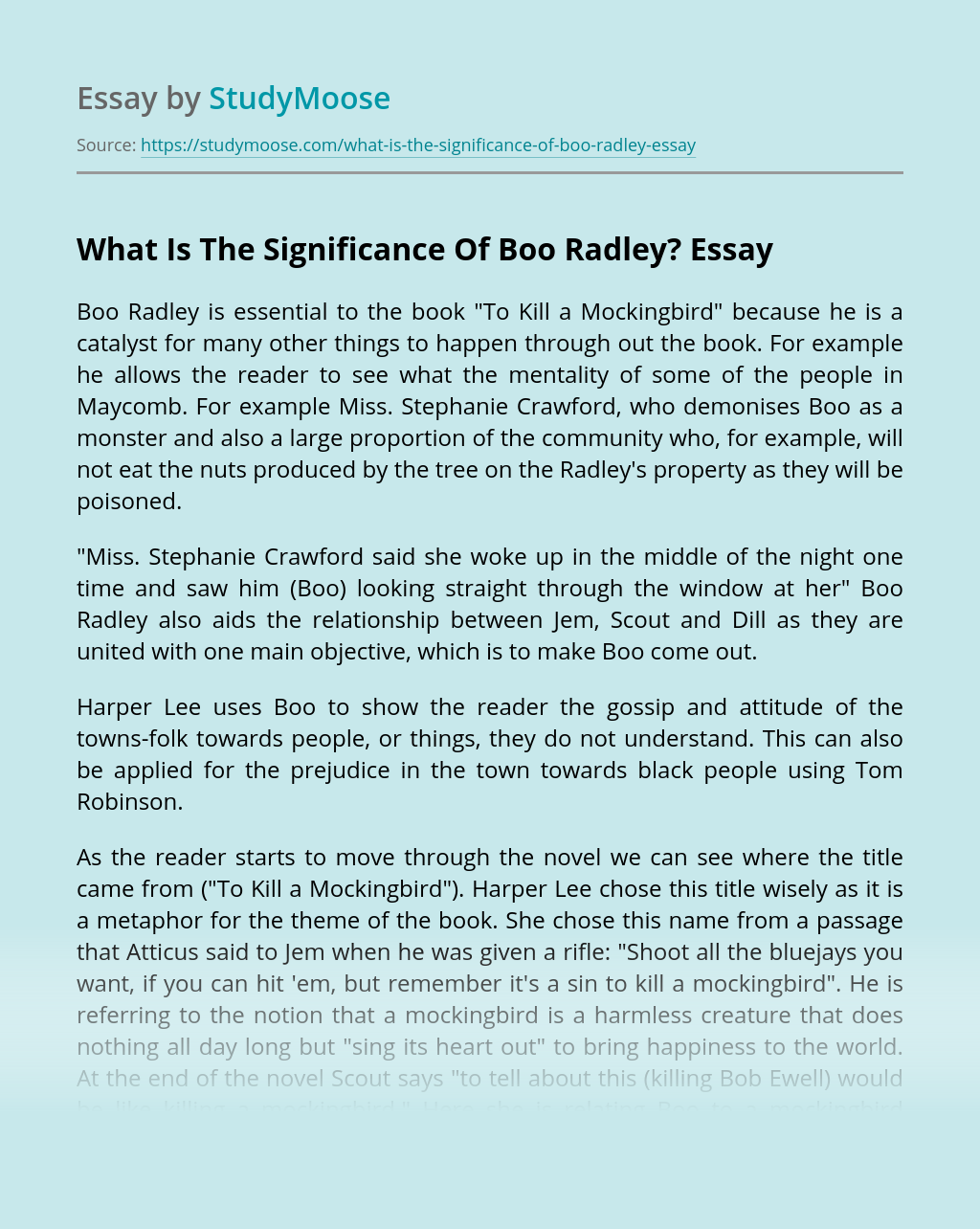