Why is Boo Radley a Mockingbird?

Arthur “Boo” Radley is an enigmatic character in To Kill A Mocking bird who is shut up in his house throughout the novel. Although he was described as a monster who eats cats and squirrels, that was not the case. He is one of the “mockingbirds” in the novel, a kind man injured by the evil of mankind. The writer dropped many little hints that proved that he is an innocent, misunderstood and victimize person, structuring him into a “mockingbird”.

Arthur “Boo” Radley was discriminated and mocked by the people of Maycomb.

Don't use plagiarized sources. Get your custom essay on
“ Why is Boo Radley a Mockingbird? ”
Get custom paper
NEW! smart matching with writer

Based on how Boo Radley is described as a recluse and had never stepped out of the house in twenty-five years, it proves that no one in Maycomb actually knew much things or had any valid information about him, including Jem and Scout. Surprisingly, the children were hoping to meet Boo one day, despite being afraid of him. They grew up hearing the rumor of how Boo wanted to kill his father and how he ate hideous creatures for dinner, thus it is quite reasonable for children of their age to be curious about this “phantom of Maycomb”, just like how children nowadays longing to see clowns in a circus.

In Chapter one, Jem used the rumors as a guide and came up with his perception of Boo Radley to Scout and Dill: “Boo was about six-and-a-half feet tall, judging from his tracks; he dined on raw squirrels and any cats he could catch, that’s why his hands were bloodstained—if you ate an animal raw, you could never wash the blood off.

There was a long jagged scar that ran across his face; what teeth he had were yellow and rotten; his eyes popped, and he drooled most of the time.”(7) This imagination brought even more fear and curiosity to the children, which soon led them into thinking about different ways such to get Boo out of his house. From chapter five, “Jem was merely going to put the note on the end of a fishing pole and stick it through the shutter”(25) I can tell that they really imagined Boo as an animal and they were trying to lure him to come out. Just like how I mentioned earlier, they wanted to see him badly, not as a neighbor, but as “ghostly-clown-of-maycomb”. This shows that the children disregarded Boo by treating him like animal or clown, or in other words “mocking” him.

People of Maycomb were spread rumors about him because they do not know him and that is also why they were afraid of him. Just like how we may feel uncomfortable with a stranger and judge them without even getting to know more about them. In the children’s case, they “mocked” Boo just because he is differently from others and they were metaphorically “killing” him by making cause comments about his identity. Hence, this is how the title To Kill A Mockingbird came about, with Boo Radley being the Mocking bird and the other characters “killing” him.

Arthur “Boo” Radley was actually a kind and helpful person. Although he knew that he was mocked and discriminated by the other neighbors, he was still willing to help the children get out of trouble. Once, Jem’s pants were stuck on the Radley’s fence and the next morning when he went back to retrieve them, he noticed that they were mended and folded properly. “(…)They’d been sewed up. Not like a lady sewed ‘em, like somethin’ I’d try to do. All crooked.(…) ”(31), Jem added that the stitches were not done neatly and this will lead the children and readers into thinking that Boo Radley might have done it himself. This proofed that Boo was very understanding as he put himself into Jem’s shoes and knew that Jem would land in great trouble if anyone knows that he had been sneaking around the Radley’s place. Boo was punished severely by his father when he did something wrong years ago, thus he sympathized Jem’s situation and did not want him to suffer like how he did.

One way that Boo Radley showed his kindness was when Scout was watching Miss Maudie’s house on fire in a winter night , he put a blanket on Scout, and she did not notice until she got back home and Atticus said “Boo Radley. You were so busy looking at the fire, you didn’t know it when he put the blanket around you.” (96). Another time when Boo saved the children was during the night when Jem and Scout were on their way home from a Halloween carnival. Mr Tate told Atticus that “Bob Ewell fell on his knife.”(145), but he knew that Boo Radley was the one who killed him. From here I can see that Boo saw Jem and Scout as his own children because if he only viewed himself as a passerby, he would not have helped them fight Bob Ewell.

Despite knowing that he might be blamed for killing Bob, he still went up to protect the children and did not intend to be repaid to his kindness. Just like how a mockingbird contributes to the people by singing its heart out without anticipating for any reward, Boo Radley also contributed by gaving the children “two soap dolls, a broken watch and chain, a pair of good-luck pennies, and our lives” (148). Hence this shows one of the similarities between Boo Radley and the Mockingbird.

Lastly, Boo Radley also displayed his innocence through various ways. He was actually an intelligent boy but he was ruined by his cruel father who locked him up. That caused him much trauma and hence he became psychologically unstable. Having this disability, he chose to refrain himself from interacting with the world and thus not step out of his house for many years because he did not want people to gossip about him. During those years, his neighbors from Maycomb spread rumors such as “(…)Boo drove the scissors into his parent’s leg, pulled them out, wipe them on his pants, and resumed his activities”(6) . These rumors were never proofed valid; people just spread them because during that time, mentally handicapped patients were ostracized by others.As time passed, people grew more afraid of him and accused him as a heartless murderer or a hideous monster.

However, this was not the case. Boo was completely misunderstood by almost everyone in the town. He was actually a very innocent and shy man and deep inside, he was still a young boy. From how he always left gifts for Jem and Scout in the oak tree, we can see that he desperately wanted to make friends with them because he did not have the chance to play with his friends when he was young. In fact, he might not even have one. Also at the end of the novel, when he finally revealed himself, he asked Scout,”Will you take me home?”(147). According to Scout, “he almost whispered it, in the voice of a child afraid of the dark.”(147) This shows that although Boo might appear to be a scary man, he was actually a very innocent child in the heart.He was cautious about walking home by himself from the Finch’s house. He was afraid of the townspeople. He locked himself up all of the time, but he was not oblivious to what people said about him, and he doesn’t want to cause commotion in Maycomb by letting others see him. Hence this shows that Boo was a victimized and innocent character who was constantly misunderstood by others and yet there was nothing that he could do about it.

In conclusion, Boo Radley is a Mockingbird because he became an undeserving victim of humanity’s prejudice. And he had to endure with all those judgmental comments of the people around him but no matter what people said about him, the kindness and innocence deep inside him will never fade.

Why is Boo Radley a Mockingbird?. (2016, Mar 13). Retrieved from https://studymoose.com/why-is-boo-radley-a-mockingbird-essay 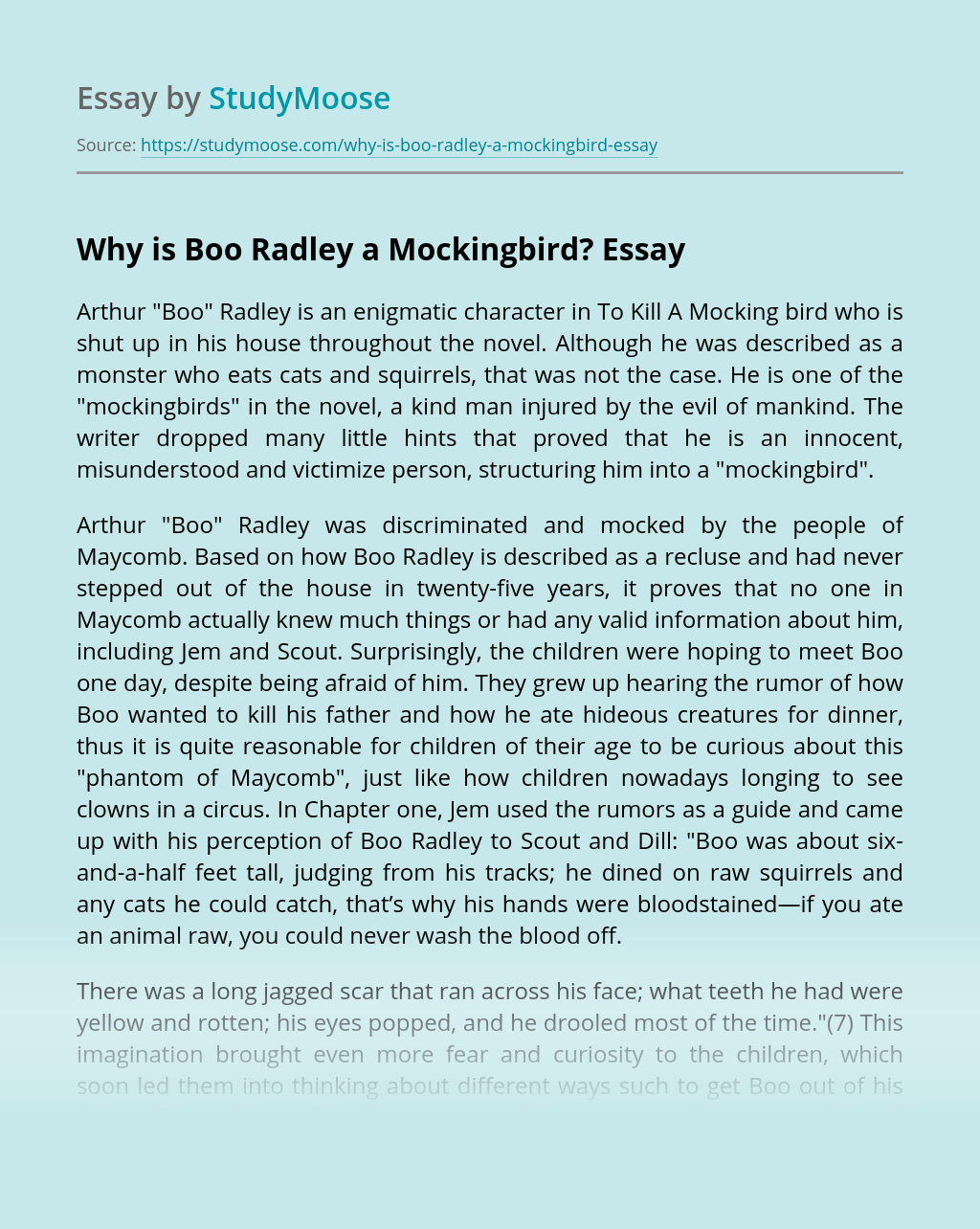