What is Literary Genre?

When you think of the term ‘genre’, what does it exactly mean to you? Well I’m sure it’s without a doubt that you all commonly believe it constitutes either a kind or category of text, but in actual fact does it really? Good morning Year 11. The prime focus of your studies during the HSC course next year, I’m going to discuss how the genre of crime fiction has extended through time, whereby a variety of notions and characteristics exhibited throughout a text may either reinforce, challenge or extend on genre parameters.

Don't use plagiarized sources. Get your custom essay on
“ What is Literary Genre? ”
Get custom paper
NEW! smart matching with writer

So what is genre then?

Although genre is quite difficult to define, there are numerous interpretations of the term since the confines between genres are constantly evolving due to changing values. As Daniel Chandler states, “defining genres may not initially seem particularly problematic but it should already be apparent that it’s a theoretical minefield. ” However, Jane Feuer believes “genre is ultimately an abstract conception.

” These critics therefore prove that yes, while it may be easy to classify a text to a particular genre, we must understand genre as a concept that can apply to varying applications rather than its fundamental relevance to a text.

In saying this, as changing contexts and values have developed over time, resulting in new-found conventions, I’ve come to agree with Stephen Neale’s understanding; “Genres are instances of repetition and difference… difference is absolutely essential to the economy of genre. ” (Neale, 1980). This my friends, effectively reflects constant changing cultural values and attitudes in our social milieu, don’t you think?

Hence, my aim today is to focus on the conventions of the genre of crime fiction and how they have been recreated in a number of ways to reflect the social and cultural aspects that are dynamic to their survival within the popularity of a text.

As Neale further suggests, “genres exist to assist in shaping values. ” Subsequently, I will discuss how and why Alfred Hitchcock’s film Rear window and Tom Stoppard’s play The Real Inspector Hound have re-worked and extended upon crime conventions prevalent in crime writing through genre, often defying audience expectations in one way or another.

As a result, Rear Window highlights and expands upon the cosy conventions of its contemporary society by paralleling the post-war issues of voyeurism and women and subverting them, reflected through its social milieu. The Real Inspector Hound also utilises cosy conventions but parodies them instead, challenging the classical Golden Age’s ‘whodunit’ storyline in a satiric way, so as to query the restoration of justice and the idea of reality vs. allusion.

Thus, whilst both texts seek to extend and challenge crime conventions, they also serve to explore society’s human conditions and issues at the time in order to become seminal texts of the genre. Directed in 1954, Hitchcock’s Rear Window reinforces the fact that very few works exemplify all required characteristics of a particular genre, by cleverly breaking the ideal conventions of a suspenseful circumstance in a crime fiction text. The film is rather based around the notion of both solving the crime and proving that it happened.

Rear Window further revolves around the concepts of the changing roles of women and queries the morality of voyeurism. Such notions reflect the contextual concerns of the post-war era where a revolutionary social change was clearly prevalent in society, thus endangering the traditional gender restrictions marked by WW2. Through the mis-en-scene of Jeff holding his camera looking outside the window as blinds are swiftly raised to reveal vignettes of apartments, it’s evident that a didactic message outlining the unethicalness of voyeurism is contained within Rear Window.

As voyeurism further exposes hidden worlds within the film, Hitchcock manages to reflect upon American society through each of these blocks acting as a microcosm. But it stops there. Quite similarly to our other text The Real Inspector Hound, Hitchcock withdraws from typical crime conventions by not showing the occurrence of the crime itself. This was due to growing conflict between the conservative American government and growing acceptance to sexuality by society at the time, as a result of censorship on films.

The concept of voyeurism is cleverly employed by Hitchcock via subverting a cosy setting, a convention to reflect the concept of McCarthyism where there was a fracturing of society due to the paranoia of communism, which was most prominent during the Golden Age. This is illustrated as the camera pans across Jeff’s apartment, focusing on his photography tools and emphasising his infatuation for observing life. Thus, Jeff’s dilemma of being entrapped in his apartment persuades him to do “something drastic” to remove him “out of the swamp of boredom,” which metaphorically foreshadows his forthcoming hobby of spying on his neighbours.

I’m certain you all must think he’s strange, but the aspect of social insecurity and fear at the time was what Hitchcock was seeking to embody. Where spying begins as an innocent obsession, it soon becomes a neurotic effort to prove Thorwald’s criminal actions. Therefore, after the growing tension depicted through continual panning shots, Jeff takes action which exposes clues in Thorwald’s apartment. However, the consequences of voyeurism are made apparent through the non diagetic sound and quick motion of Jeff falling out the window.

Hitchcock hence questions the moral ambiguity of voyeurism due to society’s fear of maintaining social order, by focusing on the depraved aspect of society becoming “a race of peeping toms. ” Despite changing perceptions of females in the workforce, how exactly did Lisa become an amateur detective and femme fatale, whilst presenting the evolving independance and roles of women? In actual fact, Hitchcock broke a key crime convention – there must only be one detective!

A high angle shot first characterises Jeff as bound to his wheel chair, and the cast around his injured leg is symbolic of the identity boundary he endures. Consequently, Jeff is left helpless, a frequent motif that’s prevalent throughout the film in which Jeff is metaphorically incapable of embracing his male dominance, hoping to “emerge from his plaster cocoon. ” Thus when Lisa emerges, the dark lighting and shadows surrounding her signifies Jeff’s intimidation, as men were startled by the role of women in the post-war period.

By having Jeff restricted at home in a feminised position, Hitchcock underpins Lisa as the amateur sleuth, sustained through her constant dominance over Jeff within the framing. Hitchcock further challenges the authority of women in crime fiction as femme-fatales, whereby negative connotations strengthen the presence of conceited masculinity. Yet Lisa’s strong persona and sheer determination leads to her fatal participation in “the next assignment,” exhibited in the panning tracking shot of her investigating Thorwald’s apartment, underlining Lisa’s unusual role as a detective and the film’s conclusion of restoration.

Subsequently, Hitchcock illustrates the development of crime conventions by challenging traditional crime conventions, via representing the shift in the growing independence and role of women in society, by maintaining both genders as main detectives. Thus, Rear Window not only reinforces and extends upon crime genre parameters, but also reflects society’s changing values, hence explaining why it’s considered a critical crime fiction text even today. Unlike Hitchcock who reinvented some crime writing rules, Stoppard completely goes against them.

Whilst Stoppard experiments with the classical Golden Age crime conventions, the crime genre is seen to continuously mirror society’s changing attitude and values. In successfully challenging the audience to interpret whether the perceived distinction between what is real and an allusion in crime is essential, Stoppard also leads them to question the restoration of justice. The perceived distinction between reality and allusion is no longer relevant in today’s post-modern world as it was in the Golden Age, due to changing societal expectations, like Stoppard suggests.

He breaks traditional conventions, as the margins of a play-within-a-play have been intersected, demonstrating the blurring of reality. Whilst Rear Window uses a cosy setting to depict society’s issues, Stoppard instead parodies it to demonstrate that a crime isn’t always within its confines, and hence defies crime conventions to outline the irrationality of society. The cosy method of contrivance supports this, being parodied through Mrs.

Drudge’s absurd dialogue about the “somewhat isolated Muldoon Manor, which is surrounded by deadly swamps and fog. ” Thus Stoppard criticises S. S Van Dine’s code where “the detective himself” “should never turn out to be the culprit,” by forwarding the murderous role onto Puckeridge, whom the audience come to learn as Inspector Hound and Magnus also. This is depicted in the final scene through an exaggerated climax of a string of revelations. For eg. “I am not the real Magnus Muldoon! It was a mere subterfuge. Stoppard effectively emphasises the melodramatic and absurd situation of the play, by demonstrating multiple pauses and an overuse of explanation points in union with stage directions. Through a variety of dramatic devices, the distinction between reality and allusion is dissolved, as Stoppard denounces the lack of innovation and irrelevancy of crime fiction conventions. Society is further challenged by Stoppard to query the relevancy of the nature of truth and justice within the traditional crime fiction genre.

So must there always be a hero within the context of the text? The authorities within the play are not central figures, just like the police aren’t in Rear Window, as justice isn’t achieved. But whilst the police in Rear Window are idiotic, Inspector Hound doesn’t even convey detective traits. Alternatively, Inspector Hound is continuously ridiculed through stage directions. For eg. He is wearing “inflatable swamp boots and carrying a foghorn,” in his entrance.

Moreover, Stoppard also extended upon genre parameters in The Real Inspector Hound by satirising the classic conventions of characters and plot from the Golden Age, whereby he duplicated postmodernist beliefs at a point where it was seen as time for change. Thus, both texts have grown to become seminal crime fiction texts, by cleverly reinventing already established crime conventions in numerous ways.

What is Literary Genre?. (2018, Sep 02). Retrieved from https://studymoose.com/what-is-literary-genre-essay 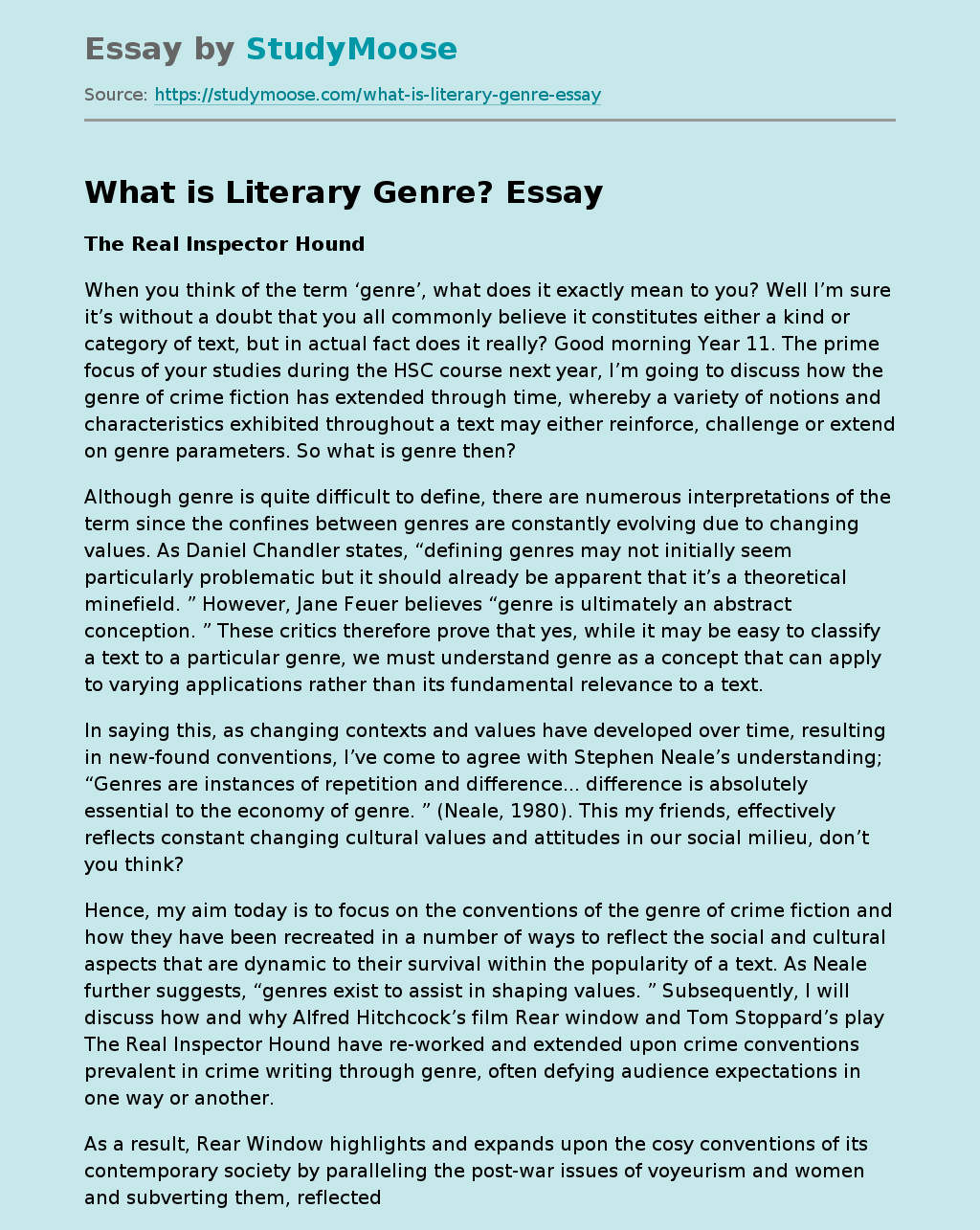