Wesak also known as Vesak is a significant and crucial aspect of Buddhism that is celebrated widely by many different countries including Thailand, China, Sri Lanka and Indonesia. The ritual Parinirvana celebrates Buddha’s birth, enlightenment and death for both individuals and the greater Buddhist community. Buddha is celebrated in a variety of different ways from one country to another but has around 376 million adherents with identical significance of celebrating Buddha’s universal peace message and guideline to mankind which is the belief that peace can come with unity of individuals and the community as well as attaining a life of contempt, using the dharma and teachings of the five precepts, eightfold path and three jewels to move away from the corruption of cravings and desires to a world of pureness and holy peace.

Don't use plagiarized sources. Get your custom essay on
“ Wesak Festival ”
Get custom paper
NEW! smart matching with writer

“Better than a thousand hollow words, is one word that brings peace” (1)

There are three major festivals that occur in the Buddhist community that form the spiritual peak, Wesak being the second festival which commemorates the Buddha and his enlightenment.

Adherents of Buddha including families and the community celebrate wesak and the eightfold path on suffering to display their faith and are used to consider and evaluate their lives in terms of greed, anger and foolishness. The uses of the three jewels also known as the three treasures involve the Buddha, Dharma and Sangha. The jewels are celebrated for their significance and importance in the Buddhist community and the lives of individuals as well as in relation to Buddha himself, the community and his teachings of life and living a way of life without suffering by attaining nirvana and enlightenment by leaving behind desires of wants and therefore negative feelings in which these desires crave.

The five precepts which Buddhists live by including harming living things, stealing, sexual wrongdoings, gossiping and taking any substance which alters the mind are all acknowledged and honoured during wesak so adherents may understand, consider and change their ways in order to possibly achieve enlightenment and in turn Nirvana. The teachings of Buddha help understand wisdom, and accept pure virtues as a means to a good and holy life “ Just as treasures are uncovered from the earth, so virtue appears from good deeds, and wisdom appears from a pure and peaceful mind. To walk safely through the maze of human life, one needs the light of wisdom and the guidance of virtue.” (2)

The annual ritual Parinirvana is celebrated significantly throughout certain parts of the world but is celebrated differently by individual Buddhists and the greater Buddhist community. In China Mahayana Buddhists gather on the 8th day of the 4th Lunar month while Chinese Theravada Buddhists celebrate it as a community during the full moon. Individually Buddhist adherents attend monasteries and pray for peace in the world, they are also present to listen to sermons led by Buddhist venerables. As a Buddhist community families watch rituals in which the Buddha is bathed in water which is to acknowledge the devas and spirits who made plentiful offerings to Buddha during his birth. Buddhist flags and flowers are plentiful as they are decorated all over the monasteries while restaurants abstain from meat, promoting a vegetarian diet.

In Singapore as in China animals such as birds and tortoises that are captured are released as well to display compassion and mercy using the saying “mind is everything. What you think you become” (3) which is an important saying by Buddha upheld in China as they believe that paying homage is not about gifts, candles and incense but by truly worshipping and following the guidelines of the dharma which is his teachings as well as the eightfold path, three jewels and five precepts to guide their life in a holy direction towards enlightenment and nirvana and away from corruption and towards suffering.

In Thailand Vesak is celebrated on a different day each year depending on the local lunar observance, this year it will be celebrated in Thailand on the 13th of May. As a Buddhist community many individuals, family members and monks walk around a Buddha statue at sunset while moving a holy object around. Children also take part in Wesak day by attending the Thai Buddhist Chetawan Temple where children are encouraged to drop coins into golden Buddha statues as a blessing. Wesak known by the majority of the population as Visakha Bucha is celebrated by Thai Buddhist by gathering around temples to pray and offer appreciation to the deity, monks wearing significant forms of clothing such as the saffron robes will lead sermons and have candlelight services at night. These celebrations can last for about a week and are based around the saying of Buddha “Thousands of candles can be lighted from a single candle, and the life of the candle will not be shortened. Happiness never decreases by being shared” (4).

The public holiday wesak pronounced Waisak in Indonesia is on the full moon of the 4th month and is considered Buddha’s anniversary. The community as a unity together walk with monks on a short 3km walk with pilgrims to the most famous temple known to many as the Java’s Borobudur which is considered to be the biggest Buddhist temple. In the temple many await the rise of the full moon before lighting candles, giving offerings, chanting, praying and a ceremonial walk known as Pradaksina, where monks create a circuit around the holy temple carrying bottled water to symbolise the humility of the Buddha but also carry flames from different locations in respect to his enlightenment and achievement towards nirvana. Ceremonies such as taking blessed water, lighting an eternal flame and providing food for the monks provided by the community called Pindapata is also a significant community aspect in the pindatapa ritual.

This is to commemorate the monks who have given up their life for their beliefs in world peace and mankind using the guidelines of Buddha’s Dharma and by following and devoting their lives towards achieving enlightenment through the eightfold path and five precepts which is not easily accomplishes as desires and cravings are put aside to meditate and pray. Meditation on the full moon is also an individual Buddhist practice that is acknowledged during wesak, in addition individuals and the community follow the Dharma wheel through the streets and around temples which consists of the colours red and yellow to identify with friendship, peace and love. To individuals and the community Vesak is a way of re-birthing in which everyone starts a new, “no matter how hard the past, you can always begin again”. (5) This is a continuous and powerful saying in Indonesia. Children take part in schools by coming together under the Walubi which is a community of Buddhists councils who organise the event, where gifts of candles, water and flowers are left to display devotion and humility.

Wesak is celebrated by many but are extremely religious and cultural in places such as Sri Lanka and is celebrated on the full moon on the 13th and 14th of May for two days. On this two day period alcohol and meat are forbidden, animals and insects of all types are released in large amounts. Toranas, each one informing a past story about the lord Buddha are lit and raised in a variety of locations including Colombo. As part of a cultural tradition lanterns called vesak koodu are placed in plain view above and in front of houses to symbolise the everlasting light and will of Buddha. Songs of devotion to Buddha are sung with free food stalls in place to bring joy and pleasure to tourists and locals, setup by organisations and business people. Many attend including those across the country who believe in the Buddha’s teachings “have compassion for all beings, rich and poor alike; each has their suffering. Some suffer too much and some too little”. (6) Within Sri Lanka many Buddhist individuals and the community itself pay homage to Buddha by cleansing homes in which they are cleaned and decorated in order to invite the teachings of Buddha into the home.

The abundance of Buddhists celebrates Wesak in a variety of ways and in a substantial amount of countries are all celebrating the same cause, the birth, enlightenment and death of the Buddha. The fact that the majority of them are spread apart and across the world from each other displays how far Buddhism has spread to become a significant cultural and religious part of the universe. Individually and as a Buddhist community many countries including China, Singapore, Thailand, and Sri Lanka celebrate Buddhism in similar ways including the release of caged animals, prohibited consumption of meat and encouragement of a vegetarian diet. The moral guidelines in which Buddhists devotees truly follow such as the three jewels, five precepts and the eightfold path are tradition and are what Buddhist believe will create a contempt life of enlightenment and stray away from the path of negative thinking and attitudes of suffering. By Olivia 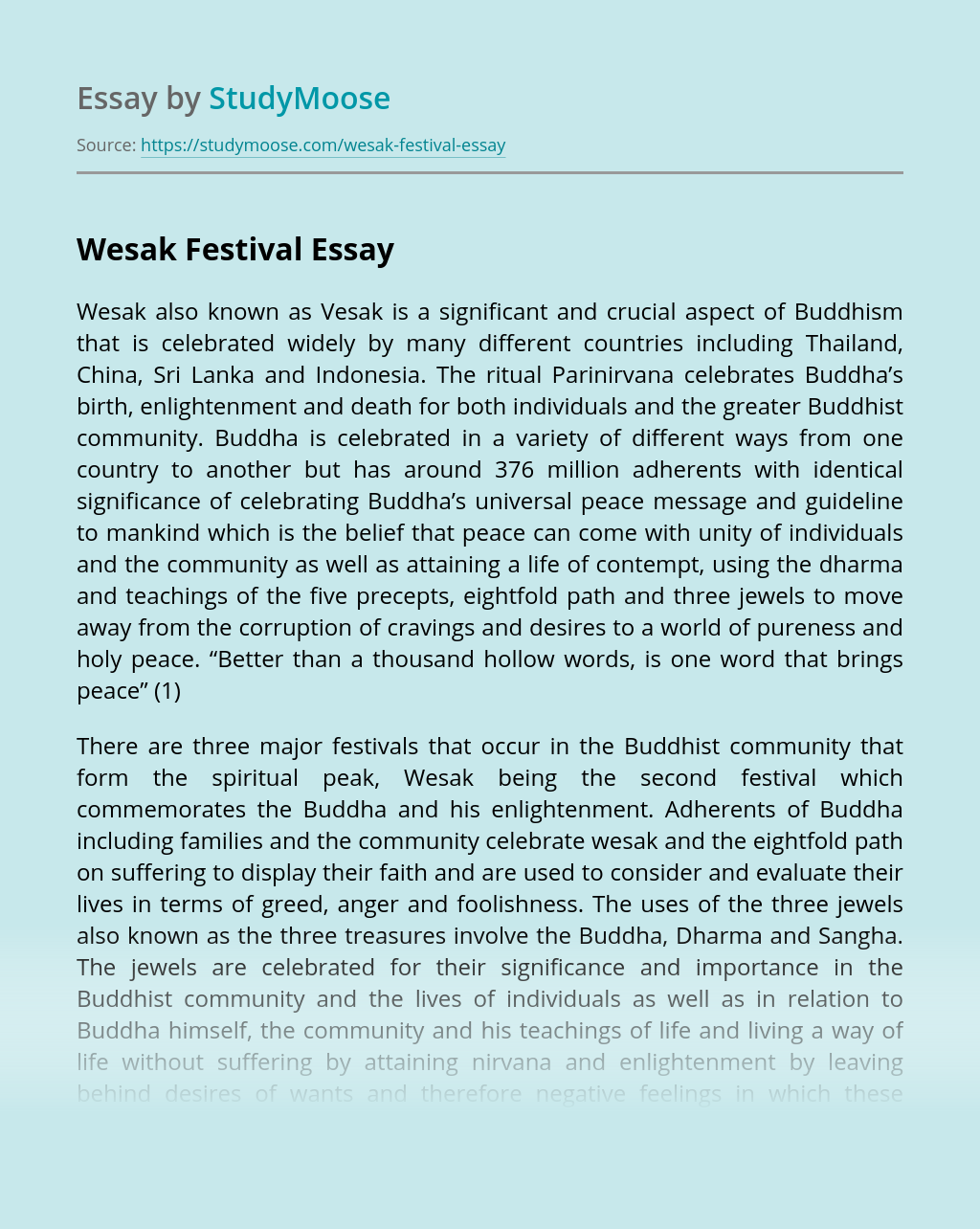