Little Buddha starts with a Buddhist monk, Lama Norbu, going to Seattle in search of Jesse Conrad, a boy who Lama Norbu believes may be the reincarnation of Lama Norbus old teacher, Lama Dorje. Lama Norbu and his fellow monks find Jesse and his family, and after an awkward first meeting gives Jesse a book called Little Buddha, which is read to him over the course of the movie to teach him the history and basic points of Buddhism.

Don't use plagiarized sources.
Get Your Custom Essay on “Little Buddha” Summary and Review Just from $13,9/Page

We get to watch what is being read to Jesse, so there is a movie of Buddha inside a movie of Buddhism. Jesse starts making trips to the Monastery to learn more about the monks and their practice. During his time in the monastery, Lama Norbu reads parts of the book to Jesse. We learn about the birth of Siddhartha Gautama as a prince who was destined by the stars to be great. We learn how his father sheltered him from everything that had the potential to disturb him, and how he finally, when he was a teenager, discovered suffering, poverty, old age, and death.

We learn about how he left the palace with a goal to end suffering, and how he became an ascetic.

Finally, after hearing a man telling his music pupil about how the string of an instrument has to be in the middle ground between being to tight and snapping and being too loose to play, Siddhartha realizes that the path to enlightenment lies in the Middle Way, or whatever the middle ground is between any two extremes. Jesse is very interested in Buddhism, and Lama Norbu convinces Jesses dad, Dean Conrad, to let Jesse make a trip to meet the other candidates for being the reincarnation of Lama Dorje, and then go to Bhutan for the decision of who it actually is. Jesses mother objects, but gives in after a very emotional scene and Dean, Jesse and Lama Norbu all fly together to Katmandu, where Jesse finds Raju, an awesome little guy who happens to be the second candidate for being the reincarnation of Lama Dorje. Raju asks to play Jesses gameboy, and after Rajus brother steals the gameboy and Raju gets it back, he and Jesse get along very well.

The monks think that it is remarkable that the two candidates somehow managed to find each other without knowing who the other one was. After this they fly to India to meet Gita, an upper-class Indian girl. The third candidate comes off a bit conceited and boastful and the beginning, but they all seem to get along afterwards. It is at Gitas place where they find a tree much like the one Siddhartha Gautama meditated under to reach his enlightenment. Here Lama Norbu tells them the story of Siddharthas meditation, and how Mara, an evil being of temptation and malice (much like Satan) tried to stop Siddhartha from reaching enlightenment. This is where all the good special effects come in. After all of his distractions fail, Siddhartha Gautama reaches enlightenment and becomes The Buddha. After this scene, we emerge from the Buddha tale and Lama Norbu and the rest fly to Bhutan, where Lama Norbu informs them that they are all partly the reincarnation of Lama Dorje. Lama Norbu, finally having completed his task, reveals that he is unhealthy, and he soon, after meditating for a very long time, passes away.

Analysis:Little Buddha begins with Lama Norbu telling the apprentice monks at the monastery a story. The story teaches of the cycle of reincarnation, and the ultimate goal of being relieved from this cycle. The story also states that No human being needs ever to sacrifice another animal. This exhibits one of the main principles of Buddhism. Buddhists are generally vegetarian, and dont believe in killing other animals. The movie also teaches of the practice of meditation.

Lama Norbu describes it to Jesse on the plane to Katmandu: It is being totally quiet and relaxed, separating yourself from everything around you, setting your mind free like a bird, and you can then see your thoughts as if they were passing clouds. Buddhists are also supposed to detach themselves from worldly connections, which is why they destroy the intricate sand murals that they create as soon as they are completed. Lama Norbu also tells Jesses father at the end that he is not a good example of Buddhist detachment because of his dedicated search for the reincarnation(s) of his teacher (obviously because of his love for Lama Dorje).

The primary character who most exemplifies Buddhist philosophies is, despite the fact that he is not good at detachment, Lama Norbu. He is the old, wise one in the movie, and, not having any background on any of the young monks depicted in the movie, the obvious choice for best Buddhist. Lama Norbu is exceptionally good at meditating, too. When he was dying, he meditated for many days on end.

I would definitely recommend Little Buddha to anyone interested in learning more about religion, or Buddhism in particular. Although the movie covers most of Buddhas life and most of the main characteristic of Buddhism, is manages to avoid seeming educational. I would not recommend Little Buddha to anyone addicted to constant action, suspense, or romance, because this movie contains very little of any of them. This movie is all about the emotion the interactions, the learning, and the maturing of every character. Every one in the story gets introduced to a culture not familiar to them during the course of the film, and some characters, like Jesse, get absorbed into entirely new lifestyles. The movie is artwork at a very fine level much attention to detail is present, and the entertainment is all in the details. Little Buddha is the perfect nightmare movie for all people too shallow to comprehend it, all people so shallow as to think it slow, and all people too imperceptive or unfocused to catch the subtle nuances of its characters interactions.

I was very interested in the very prominent cinematic techniques used in Little Buddha. Usually, when one is watching a movie, one can forget that it is a movie because the cinematic techniques are planned to be subtle, as to not be noticed. Only film making aficionados usually pay special attention to cinematics. I could not help but notice though, that all of the sad scenes of the movie were displayed with a very blue tint, and the scene in the hot, eastern desert was displayed with a red tint. The directors of this movie were obviously not trying to make your average, run of the mill movie. They were trying to create a cinematic masterpiece. By using these prominent cinematic techniques, they were daring to make a controversial film.

Little Buddha was an educational film that displayed thought and emotion throughout, and gave the viewer a look at the inside of Buddhism. It was displayed in a way that taught more than a textbook paragraph ever could, with likeable characters, (for the most part) realistic character interaction, and the intention of spreading knowledge of Buddhism and possible Buddhism itself to anyone who is willing to spend two hours of their time on something well worth their while. 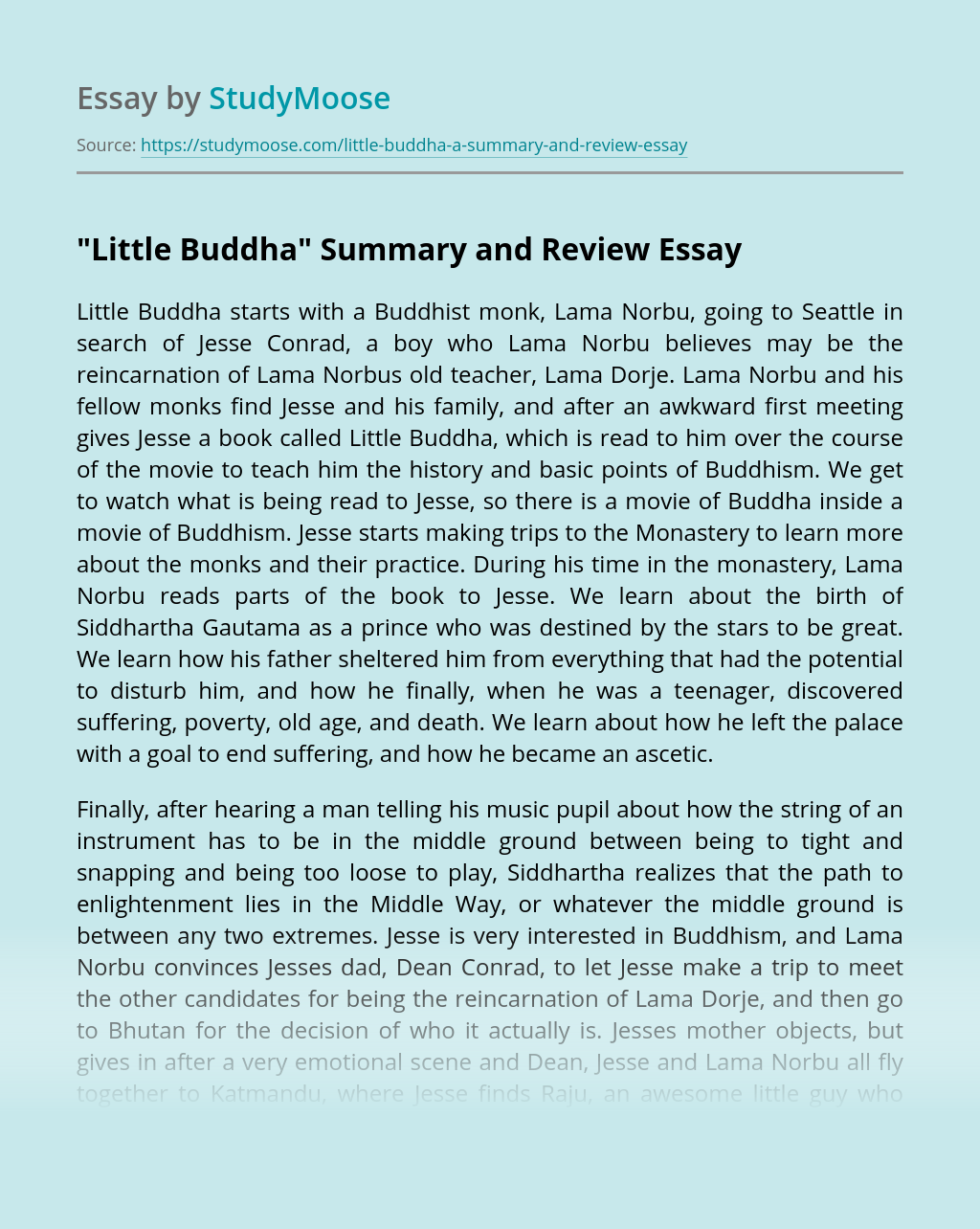 Passion of the Christ

Rate this post Becoming A Better Person For most of us, there has been a particular piece of art that has taken great effect on our lives in a positive way. Whether it being a painting, song, or even a movie, these positive influences change us as people, and we don’t even realize it until...

Rate this post The movie The Book of Eli directed by the Hughes siblings is a cinematic screen of dystopian genius. Lots of dystopian films review federal government participation, personal privacy issues, and ethical concerns. However in The Book of Eli, the Hughes brothers take a dive to a different part of modern-day society: religious...

Get Essay
Something the Lord Made

Rate this post Vivian Thomas was a black man living in a time of great prejudice in our country. He was very intelligent and skilled in the field of medicine and was an asset to the scientists and doctors trying to find a cure for the “blue baby” syndrome. He had great determination and humility...

Rate this post Ishmael Bernal’s films have received countless acknowledgements throughout the years because of his unique style of “working out patterns of symbolic details” (Lumbera 25). And through these patterns, Bernal was able to portray his views on things as an auteur. This paper examines his interpretations of religion and religious activities through his...

Rate this post F.W. Murnau’s “Nosferatu” is a traditional visual tale of Bram Stoker’s “Dracula”. The quiet film is filled with obsession and lust, surrealism as well as the prosaic style of good versus wicked. The movie states the tale of Hutter, a property representative hungry for money, and his journey to vampire Count Orlak’s...

Summary of “The Lord of the Rings: The Two Towers”

Rate this post Rowel Tolkien is one of the founders and creators of fantasy, as a genre. One of his most famous books calls “The Lord of the Rings.” There is also an interesting film based on this book by a director Peter Jackson. Most people think of this creature as a unique storyline with...

Rate this post San Francisco. Dazedness John “Scottie” Ferguson was terminated from his situation as a police reviewer following a genuine expert wrongdoing: in a housetop pursue, he was mixed up and a cop kicked the bucket attempting to help him. A previous secondary school companion, Gavin Elster, executive of a shipbuilding organization claimed by...