Water Pollution in the Philippines

The Philippines is an archipelago, which means it is made up of a group of islands and is rich in bodies of water such as the oceans, rivers, and lakes. However, according to the data released by Water Environment Partnership in Asia (WEPA) in 2005, 42.89% of the waters in the Philippines are contaminated. These contaminated waters have not only been continuously harming people, but also the aquatic ecosystem of the country. It is said that approximately 31 percent of illness monitored for a 5-year period were caused by water borne sources.

Don't use plagiarized sources.
Get Your Custom Essay on Water Pollution in the Philippines Just from $13,9/Page

Moreover, more and more ecosystems are being polluted, causing serious diseases, water shortages, and extinction of aquatic animals and coral reefs. In this essay, I would like to discuss about three main sources of water pollution in the Philippines and its possible solutions: one, domestic waste; two, agricultural waste; and three, industrial waste.

The first reason concerns domestic waste. Domestic waste refers to the organic pollution that usually comes from our houses by generating activities such as using the toilet, doing the laundry, and washing dishes.

Unknown to many Filipinos, their homes are the biggest source of water pollution, contributing 48 percent of the organic pollution in the country. The reason for this is that most of the houses in the Philippines are not connected to a water sewerage system, which results to the contamination of groundwater with effluents and wastes from septic tanks. Exposure, ingestion, or contact with this contaminated water, which usually occur in the less fortunate area of the country, kill 1,997 people per 100,000 population by either cholera, bacterial diarrhea, hepatitis A, or typhoid fever, the Department of Health stated. Most Filipinos are not aware of this issue, and if they were, most would not be able to afford connecting on a sewerage system.

The next reason concerns the running off of agricultural waste. The Philippines is mainly an agricultural country with a land of 30 million hectares, 47 percent of which is agricultural. Having stated this, agricultural waste in the Philippines contributes 37 percent of the water pollution in the country. No one would question the critical value of water and food to human civilizations. However, these agricultural productions possess a serious threat to the rivers. The agricultural production of the Philippines has been based upon a large amount application of chemicals to the land. Fertilizers used for farming contain a large quantity of nitrogen and phosphorus. These enrich the soil near the lakes and rivers, and help algae grow at a considerable rate. These algae use all the oxygen and do not leave anything for the rest of the aquatic life around. Moreover, algae formation blocks the passage of light and air for the other aquatic animals. This has an adverse effect on the biological life of these aquatic animals, which is termed Eutrophication.

The third reason concerns the discharge of industrial waste. The industrialization of the Philippines has led to more and more infrastructure constructions and factories starting to line up along the rivers. These factories find rivers and oceans a convenient place to dump their waste materials such as acids, toxic metals, oil, and pesticides. For example, in Manila, the capital city of the Philippines, an oil depot built along the Pasig River has been releasing liquid and solid wastes that worsened the contamination of the river, making the river a huge sewer system. These toxic substances are quite harmful for humans as well as aquatic animals. Living near these contaminated rivers means surrounding one’s self with infected mosquitos that can give people dengue fever. In addition, with all these waste in the rivers, our fish get sick or are killed, leading to extinction of fish and decrease of food production in the Philippines.

It is important that action is taken to combat these problems. For example, to lessen the distribution of domestic wastes to the water pollution in the Philippines, proper sensitization of the masses about the need for proper disposal of domestic waste should be implemented. Educational projects where the people are taught about the importance and proper domestic waste disposal should be set up. This will deal with the problem of the ignorance of the masses. Setting up adequate waste handling, such as putting biodegradable and non-biodegradable trash cans in schools and public areas, disposal facilities and a proper disposal location with proper management will save people from carelessly disposing waste. Moreover, the government should enforce existing laws and restructure the budget for environmental issues and ensure at least 50 percent of the houses are connected on a water sewerage system.

To lessen and stop agricultural wastes that pollutes water, prevention of the usage of harmful chemical as fertilizers are needed. While people may find nitrogen and phosphorus helpful, much of their volume is being washed off on lawns and into the nearest waterways. These also tend to degrade the quality of the soil, causing more and more reliance on the chemicals over time. Eutrophication can be avoided by using minimal required amounts of chemical fertilizers and or by using natural fertilizers such us manure or compost. Making sure that the fields where these chemicals and fertilizers are not close to the rivers, taking extra care while using fertilizers during rainy seasons in the Philippines usually from June to September, which can run-off and transmitted to the waters and can cause blockage of waterways, death of marine life and breakage of food chain should be done immediately and seriously.

For the reduction of industrial wastes, the government should not permit factories and buildings to be built near or along the oceans or rivers. Building these infrastructures away from the waters will prevent the discharge of waste materials such as oil and toxic metals. These companies will have no other options, but to segregate their wastes and dispose it properly. Any offender shall be punished by the law and pay a big amount of fine, which will be then used to treat the contaminated water by filtration and sedimentation. This way, companies will be more careful about their decisions in choosing locations on where to build their factories. Moreover, this law will only have positive outcomes because the money that the offenders pay will be for a good and better cause.

In conclusion, the Philippines is a country enriched of seas, rivers, lakes, and other bodies of water that are now polluted due to different human activities. There are three main sources of water pollution in the Philippines. The first is domestic wastes which come from houses when people bathe, wash clothes, and wash dishes. Learning about proper waste disposal and enforcing laws should be done to lessen this pollution source. The second source is agricultural waste, which refers to the large amount of chemicals put in the land for food production, which after used, are washed away to the waters and produces algae that harms the aquatic ecosystem and pollutes it. Prevention of the usage of chemicals used in agricultural work will help decrease the amount of pollution. The third source is industrial waste. Industrial wastes are the effluents coming from big factories that are built and connected to the rivers and lakes. Making new laws that will punish these factories and companies will contribute to minimizing water pollution in the Philippines. To sum up, human activities in general are the main reasons for the severe water pollution in the Philippines and we humans, are also the only ones who can stop this critical environmental problem.

Water Pollution in the Philippines. (2016, Nov 10). Retrieved from https://studymoose.com/water-pollution-in-the-philippines-essay 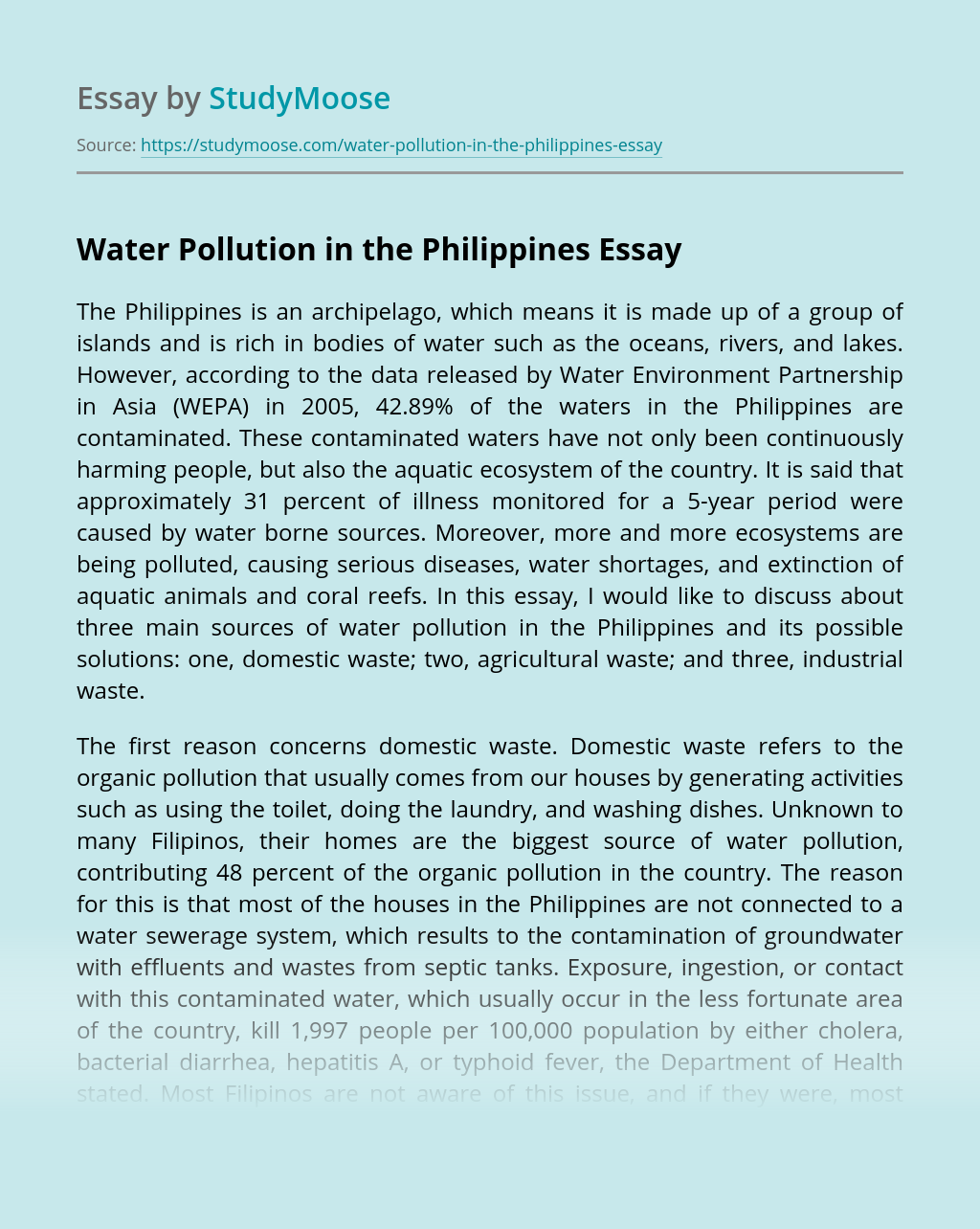 Water Pollution: Its Kinds and Consequences

Rate this post How true these words sound in the present context. There is so much pollution all around us today that normal breathing in itself is the greatest risk to our lives. Pollution has affected our lives so adversely that because of this, millions of people die annually. The way the environment is being...

Get Essay
The recent El Ni?o season has greatly affected the water source of

Rate this post The recent El Ni?o season has greatly affected the water source of the vast majority of Luzon Island. Angat Dam has plummeted beyond critical water level. Last time this happened was about 10 years ago and water interruption deeply affected both the lives and the economy of the country. San Pablo City...

Rate this post Source of water Life is possible on earth due to the presence of water. Nearly three-fourths of the earth’s surface is covered with water. Water is also found below the earth’s surface. It is present in air in the form of water vapour. About 70 per cent of the human body is...

Cultural and environmental Issues in Pakistan

Rate this post Corruption is the prime reason behind the economical unstableness. Corruption has spread into the world and has ruined the economy. Pakistan has been ranked at 42nd number among the most corrupt nations of the world. Unemployment: Unemployment is a major social problem caused by poor economical system. Causes of unemployment are: Lack...

Main Causes of Pollution in Urban and Rural Areas

Rate this post Land pollution is a major global health concern, and occurs when humans fail to manage their waste appropriately and leave it to contaminate the land. Over time, land pollution degrades the quality of not only the land in an area where waste is present, but also the quality of things growing in...

Rate this post ENVIRONMENTALISMThe environment is where we all meet; where we all have a mutual interest; it is the one thing all of us share. -Lady Bird JohnsonIntroduction:Pollution is the presence in or introduction into the environment of a substance which has harmful or poisonous effects. Easily put, environmental pollution causes harm to the...

Rate this post Approximately 844 million humans are lacking the access to water, and about 300,000 children die from diseases related to unclean water and weak sanitation ,this leads to the reason of why waste water should be treated and more importantly and specifically why domestic waste water should be separated and this article will...