Causes and Effects of Water Pollution

The addition of harmful and disadvantageous substance sot the natural reserves and resources of water is termed as water pollution. It can be in the form of flowing water like rivers, streams, oceans and seas or stagnant water bodies like lakes etc. Even the underground reserves of groundwater are affected by percolation of pollutants either through soil or surface run off.

Among various causes and sources of water pollution, the major one are industries who release their untreated or partially treated refuse called as effluents into the water bodies as dump or dispose.

Don't use plagiarized sources. Get your custom essay on
“ Causes and Effects of Water Pollution ”
Get custom paper
NEW! smart matching with writer

This water may in turn reach seas and oceans and spread to a wider areas than initially assumed. The next big source is the domestic habitation near the river banks or coastal areas etc. The refuse and waste from these houses I often dumped into the adjoining water body. The dumping of dead bodies (as pr certain religions) or ashes also play a huge part in contamination of natural waters.

There are also activities like bathing, washing clothes etc which are performed in or near rivers further adding to their pollution. Even transportation though waters like ships etc, often causes spilling and accumulation of waste which can be catastrophic for the water and its quality.

The menace of water pollution can be tackled only by forming a multi pronged strategy. The basic issue is of awareness and education. People have to be trained and taught the that certain activities can not be allowed near water bodies and certain lifestyle changes are needed to be incorporated to arrest such form of pollution.

This needs to be backed by robust policy and stringent laws that penalize defaulter and polluters like big industries etc.

There has to development of infrastructure for holistic treatment and purification of water and also waste water (from various sources). Better methods of waste disposal especially industrial waste, radioactive waste etc have to be developed leveraging newer and environmentally sustainable technologies.

Water is one of human beings most important basic needs. Human can survive without food for couples of days but somehow going without water, human will not survive. Using safe, clean, water is a basic human right. Mother Nature gifts us free water but selfish human beings keeps polluting the water with actions such as chemical leaks, littering into water, disposing industrial waste and also ship waste into the water. Water pollution may affects a lots of things in our daily life. Here in this little village outside the town is one of the victim that suffered a lots of water pollutions.

Recently, we received a complaint letter from the villagers that claimed that their daily life is difficult to go on with heavily polluted water supply. We checked out at the village water supply locations and found some shocking discoveries. The rivers are heavily polluted with litters such as plastic bags, bottles, paper cups, straws, unused furniture, and many more rubbishes. The river water is so heavily polluted that the water had turn into brown and discolored. The rubbish that was threw into the river became the major factor that pollute the water. The water supply in the village is not suitable to use, neither drink nor carry out daily tasks. The villagers doesn’t have enough supply of clean water after using the clean water to cook and drink, they needed clean water to carry out daily tasks such as bath, clothes washing, and housework.

The dirty water in the village might be the major causes of illness such as diarrhea. The water is not clean and safe enough to drink that maybe the water still carries bacteria or even viruses. Other than that, the clogged drains and water stagnant in the village will provide mosquitoes a perfect environment for its breeding. Some dangerous mosquito species may carry virus that capability to kill a person by just a sting. Mosquitoes such as Aedes carries Dengue virus that maybe causes Dengue Fever. People that have a strong and healthy body maybe survive the sting but those people with weak immunity system may die under the Dengue Fever. Dengue Fever kills at least 20 villagers last year.

The selfishness and laziness of the villagers shows their irresponsibility attitude to the village. The villagers will throw the rubbish everywhere especially dump area that closes with water supply. This causes a lots of bacteria breed from the rubbish dump site that formed an unhealthy living environment. These pollutions will also endanger the aquatic living things that live under the water. If these living things were being sold in the market or ate into human body, what harm or diseases will bring to these innocent victims?

As a first step to solve the water pollution, the most important thing is the local authorities must take action. The authorities such as government may consider to enforcing laws on water pollution. Local authorities of the village should form a team or committee that control and supervise the water pollution, they can caught and send those who polluter the water to police officers or higher authorities. Once they form a committee, the villagers will not to litter into the river. Whoever litters into the river should be punish heavily either by prisoning, whipping, or fine. After these actions of authorities taken, they people will be aware, not to do it again. Other than that, the government should educate the villagers on the importance of water and ways to dispose unused rubbish or chemical waste correctly. The committee that responsible to the village cleanliness should also provide more rubbish bins and also recycle stations. The government can also launch camp or seminar that related to the important of water and ways to prevent water pollution. Local authorities can try to improve the water supply by launching clean-up activities.

The villagers must be responsible to their own village. Hence, the committee should require the villagers to get involve to the clean-up activities for compulsory. Action will be taken to the family that doesn’t involve in the activities. To clean up a heavily polluted river need a long time and a couple lots of procedure for example picking up the floating rubbish, cleaning up the rubbish that sink into the river bed. All this procedure needs really long time to purified a polluted river. “Teamwork divides the tasks and multiple the success.” If the villagers of the village could be cooperative and do their job together, it will really speed up the recovery of the river.

Besides than the government, the villagers also should give fully co-operations that needed by the village. Every individuals also responsible to their village. Do not throw litter or harmful substances into the river or lakes. Do your part by picking up the litters and throw them in to the rubbish bin. Villagers also should promote the ways to prevent water pollution to relatives and friends so that they can also advocate this concept. In addition, if you saw any villager that litter or polluting the river, should report or contact the appropriate authorities so that they can take actions. Villagers also should avoid of water wastage. Ensure that there are no drips or leakages in the house plumbing. Saving water will ultimately lead to the reduction of water that flows into the sewage treatment. As for daily tasks, use laundry detergents that have low levels of phosphate only as phosphate is a major water pollutant that will heavily affect the water supply when the used water flowed back to the river.

As a conclusion, water is essential for us. Thus, we must appreciate it because Mother Nature gifted us with water for free. We show our thankful to Mother Nature by not polluting it and keep it clean at all time. These water will be used by our next generations in near future. Hence, for their health, we should start to maintain these good habits and passing this habits to our next generation.

The water in most of our rivers is highly polluted. The pollution of river water is caused by the dumping of untreated sewage and industrial wastes into it. For example, the river Ganga which flows for over 2500 kilometres from Gangotri in the Himalayas to Ganga Sagar in the Bay of Bengal is being turned into a dirty water drain by the discharge of untreated sewage and industrial wastes emanating from more than a hundred towns and cities which lie along its way.

In addition to sewage and industrial wastes, the pollution of river Ganga is also caused by other human activities like bathing, washing of clothes, immersion of ashes of the dead and dumping of unburnt corpses in its water. The industries also discharge chemical effluents into the river water. The toxicity of these chemical effluents kills the fish in many parts of the river.

This is because though coliform itself is harmless but its presence in river water indicates that other, more harmful, intestinal bacteria might also be present. The pH of river water is measured by using universal indicator paper. If the pH of river water is found to be below 7, then the river water will be acidic and hence polluted. A multicrore ‘Ganga Action Plan’ (GAP) project was launched in 1985 to clean the river Ganga and make its water pollution free.

Wells and tube-wells (bore-wells) are yet another source of water. Some of the rainwater which falls on earth seeps through the soil and goes down under the surface of the earth. Ultimately this water is stopped by some hard rocks and collects there. This underground water is taken out by digging a ‘well’ into the ground. This is called well water.

Such wells are a common sight in village areas. The deep tube- wells called ‘bore-wells’ are also dug into the earth which are much deeper than the ordinary wells and their water is drawn out by using water pumps. This water is used for the irrigation of crops and for drinking purposes.

When too much water is pumped out through deep tube-wells then the water table (level of water below the earth’s surface) gets lowered too much. This lowering of water table decreases the amount of available underground water.

In order to maintain the water table at a proper depth, it is necessary to ensure better percolation of rainwater into the soil. A scheme called ‘rainwater harvesting’ is recommended to stop flowing rainwater and make it percolate into the soil more efficiently.

Causes and Effects of Water Pollution. (2021, Feb 05). Retrieved from https://studymoose.com/causes-and-effects-of-water-pollution-essay 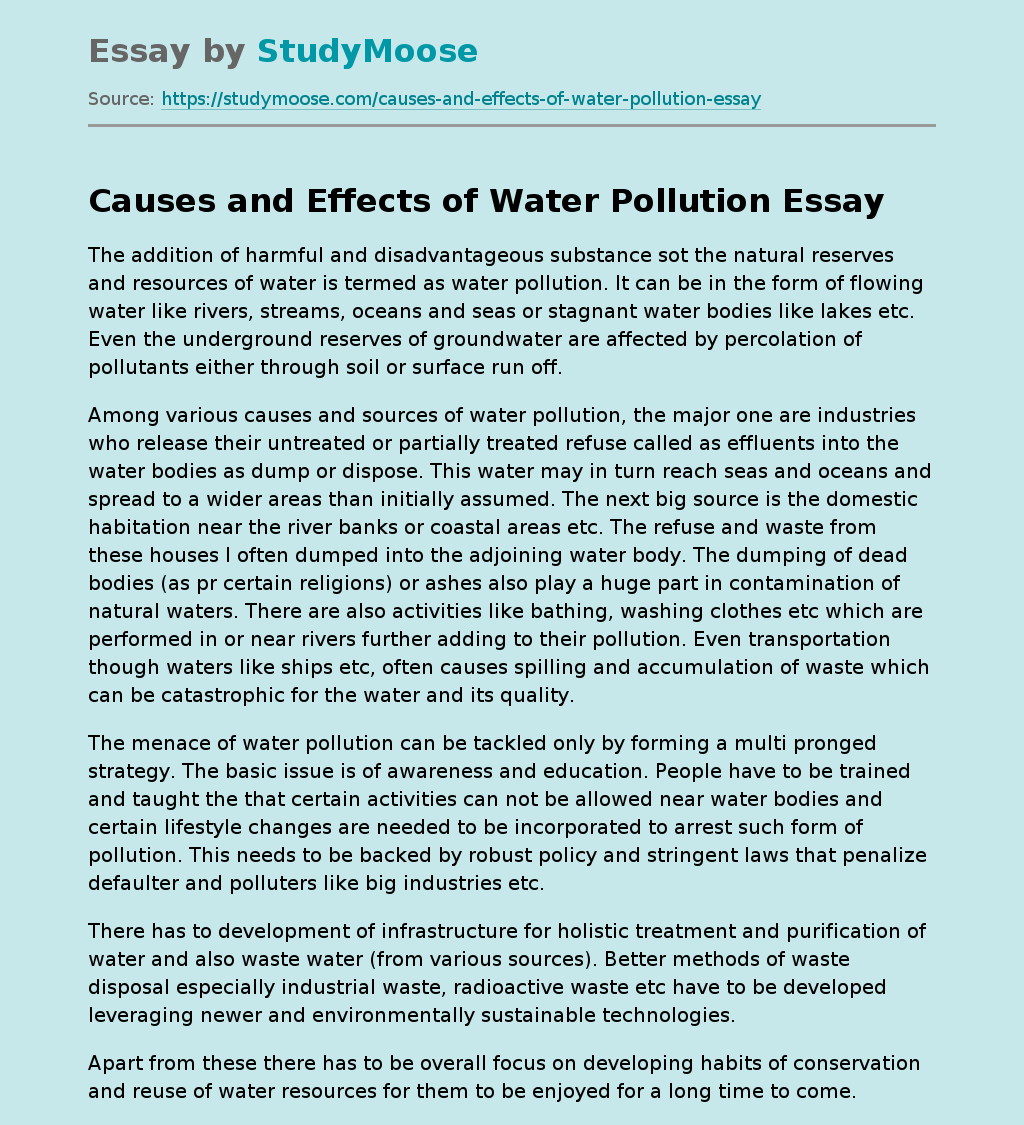