Water constitutes approximately 70 percent of the earth’s surface and therefore it is a significant resource (Krantz and Kifferstein (n.

d. ). It is a vital resource for without water, life would cease to exist on earth. It is however unfortunate that despite being a precious commodity, water pollution is existent everywhere ranging from the rural areas to the urban areas. The World Factbook (2010, p. 1) defines pollution as “the contamination of a healthy environment by man-made waste. ” In case of water pollution, there is introduction of large amounts of substances into the water rendering it unsuitable for intended use.

Don't use plagiarized sources. Get your custom essay on
“ Main sources of water pollution in urban areas versus rural areas ”
Get custom paper
NEW! smart matching with writer

From this illustration, it is evident that nonpoint forms of water pollution are more likely to be found in rural areas whereas point pollution is more likely to be witnessed in urban areas. In rural areas, the main source of water pollution is surface-runoff. This introduces a variety of pollutants especially chemicals that are used for agricultural purposes. Nitrates and phosphorous are commonly used in farming more so in European countries such as England, Wales and Ireland. These countries have gone to the extent of classifying some farms as nitrate vulnerable zones to indicate that the farms can easily cause nitrate pollution.

It is notable that run-off water pollution is also referred to as diffuse water pollution and it also entails run-off from farm buildings as well as farm roads. Manure is also likely to be washed down into water bodies during rainfall periods thus acting as a diffuse water pollution source. A study carried out by Nkwonta and Ochieng 2009) in Soghanguve area, rural South Africa, indicated that run-off from farms as well as household waste were the dominant pollutants in the local rivers. In addition, pollution from fertilizer run-off made up to 50 percent of the water run-off pollution.

This is in combination with the already mentioned excessive application of chemical fertilizers. Narendra (2010) further reports that an assessment of 179,999 ground water sites in 26 states contains pollutants such as fluoride, nitrate, salinity, arsenic and iron as per a report by the department of Drinking Water Supply. Pollution in River Hindon is said to emanate from up to 28 agro-based industries. The release of chemicals from agro-based industries causes change in water pH as well as foaming thus interfering with the aquatic environment.

Release of agrochemicals such as DDT pollutes water and the chemicals are passed through the food chain to human beings. Organic pollution especially from sewage is also a common source of water pollution in rural areas. The organic content in sewage promotes proliferation of microorganisms that pollute water by causing disease as well as using up oxygen contained in water as they decompose the organic substances. Oxygen depletion leads to an imbalanced aquatic ecosystem. Organic water pollutants in rural areas can also emanate from decomposing plants, pastures as well as livestock waste.

It is important to identify that untreated organic waste such as sewage or farm runoffs introduce disease causing organisms such as bacteria and protozoan and diseases such as dysentery are a predictable outcome. To put extra emphasis on the contribution of agricultural wastes as water pollutants in rural areas, it is worth considering a country such as China. China stocks the largest number of pigs in the world (470 million pigs as compared to 950 million world pig stock) (Qing, 2007). China is also a leader in production of poultry and goats and therefore forming the largest water pollutant country.

It is identified that most of the waste coming from the livestock farming activities is not treated well with pig farms discharging a lot of wastewater. The waste water from poultry and pig farms has low temperature and mire which is mainly organic leads to oxygen depletion once introduced into water bodies. It is estimated that if China continues to practice poultry and livestock farming, rural water pollution from these sources will exceed pollution from fertilizer and domestic wastes. Causes of water pollution in urban areas

Urban areas usually depend on ground water as stored underground tanks. The main causes of water pollution in urban areas are leaking pipes and contamination from water and sewage being close. Since urban water is sourced from a particular point, contamination at the source is also a major phenomenon. Human waste, industrial effluents as well as household wastes have are important sources of water pollution in urban areas. Urban areas, just like rural areas, have runoff especially after rainfall and these contain pollutants that are of great concern.

Sediments are a common component of urban runoff and these constitute the greatest components of urban water pollutants. Most sediment originates from the construction industry which thrives in most urban areas. The runoff may also contain other substances such as rubber, and automobile wastes (Environmental Health and Safety Online, 2009). Petroleum products are the main automobile wastes and these contain hydrocarbons. Other constituents of urban runoff include anti-icing chemicals, heavy metals, disease causing organisms such as bacteria, as well as organic materials.

Pathogens and organic materials emanate from sewage, spoilt septic tanks, and grass and leaves. A notable source of organic waste is pet wastes whereas use of fertilizer in lawns and kitchen gardens is also common in urban areas. Nutrient pollutants like fertilizers and organic wastes enhance growth of microorganisms and decomposition of wastes thus causing a decrease in dissolved oxygen. These consequentially render aquatic life unbearable. An increase in fertilizer and pesticide pollution in Bagmati River in Kathmandu city of Nepal is a good example of an urban source of water pollution.

It is also indicated that Bagmati River experiences direct discharge of industrial and domestic untreated wastes released from Patan city as indicated by an increase in faecal coliform in the polluted areas. This is an important difference in sources of urban water pollution because water from rural regions of Bagmati has normal chemistry and coliform numbers (SEARO. , n. d). Release of sewage without treatment or with poor treatment into water bodies in urban areas has the potential to introduce disease causing organisms such as coliform bacteria.

Nitrates are found to be high even in treated sewage and therefore it is a great challenge as urban source of water contamination. Phosphates are also introduced in water bodies as a result of poorly treated sewage. Phosphates are notorious in speeding up the growth of algae as evidenced in the Broads Lake in the UK. As the Broads was expanding in terms of population increase, an increase in sewage with high content of phosphates was experienced with some of the sewage gaining way into the Broads Lake.

Consequently, there was a spurt in algae growth whereas water plants died eventually disturbing the lake’s ecosystem (Srinivas, 2010). A similar phenomenon has been experienced in Lake Biwa in Japan where an excess of phosphorous and nitrogen led to excessive growth of algae as well as eutrophication. As earlier noted, urban areas depend on ground water which is prone to various forms of contamination. For instance, leaking oil from storage tanks and leaking sewage lines that are in close proximity with water pipes can end up polluting ground water.

On another note, garbage can be intentionally dumped into water bodies or the mere garbage dump can end up contaminating surface water. Since urban areas usually have industries, the industries may cause water pollution indirectly by emitting gases like sulphur dioxide that cause acid rain. Acid rain ends up disturbing water chemistry and this is hazardous to living organisms. According to Environmental Protection Agency (EPA) (2005, para 3), “pavement and compacted areas, roofs, and reduced tree canopy and open space increase runoff volumes” eventually contaminating water significantly.

In addition to increase in runoff volume the runoff is also at a high velocity thus increasing water pollution through increased erosion of stream banks, and depositing sediments in streams. The channels through which the high velocity runoff passes through are also incised leading to an increase in sediment deposition. Runoff from urban areas has a higher potential off causing water pollution since there exists no forests or grasslands to enhance water filtration into the ground as compared to such conditions in rural areas.

Urban landscapes are nonporous thus there exists almost no opportunity for runoff to percolate. EPA also notes that runoff from highly developed urban areas can lead to increased water temperatures thus adversely affecting aquatic life and the quality of water in affected streams. If a wastewater treatment plant is not maintained well or if it is poorly cited, then there is the risk of causing water pollution in urban areas. Industrial wastes and emissions are a serious concern due to their contribution in water pollution in urban areas.

With most urban areas having industries, industrial pollutants have been of major concern. It is noted that most industries are likely to be located close to water sources for industrial process (TutorVista, 2010). Unfortunately, these same industries end up mismanaging the precious resource by introducing hazardous chemicals. Industrial wastes include acids and alkalis, heavy metals like cadmium in addition to chemicals such as ammonia. Acids and alkalis alter the pH of water whereas detergents cause increased turbidity that has the potential to intoxicate aquatic organisms.

Some of the industries cause an increase in water temperature which can be lethal to aquatic life. This is common with power plants and industries that use a lot of water for cooling purposes. It is also a common phenomenon to find oil spills in lakes and oceans. Although this cannot be purely be defined as an urban source of water pollution, it is important to know that oil spills can occur in lake regions located in urban areas. Furthermore, oil refineries can be located offshore and oil spills can occur.

Oil spills lead to death of aquatic organisms since the oil covers the surface of water preventing oxygen from penetrating (TutorVista, 2010). Conclusion Looking at the main sources of water pollution in urban and rural areas, it is evident that runoff dominate as the main source of contaminant. It is clearly evident that water pollution in rural areas is point form pollution whereas pollution in urban areas is mainly nonpoint form. However, the content of the runoff differ with rural runoff contain contaminants that are mainly agricultural-based whereas urban areas have industrial-based runoff.

In rural areas, runoff mainly contains fertilizer compounds such as nitrates and phosphorous causing a proliferation in algae and water plants. The consequent eutrophication leads to oxygen depletion and death of aquatic life. Runoff from livestock farms also introduces organic compounds that are lead to oxygen depletion as they are decomposed by microorganism. In urban areas, runoff is mainly composed of sediments from construction industries as well as industrial and automobile wastes. Urban runoff is more detrimental since percolation is rare unlike in the vegetated rural areas. 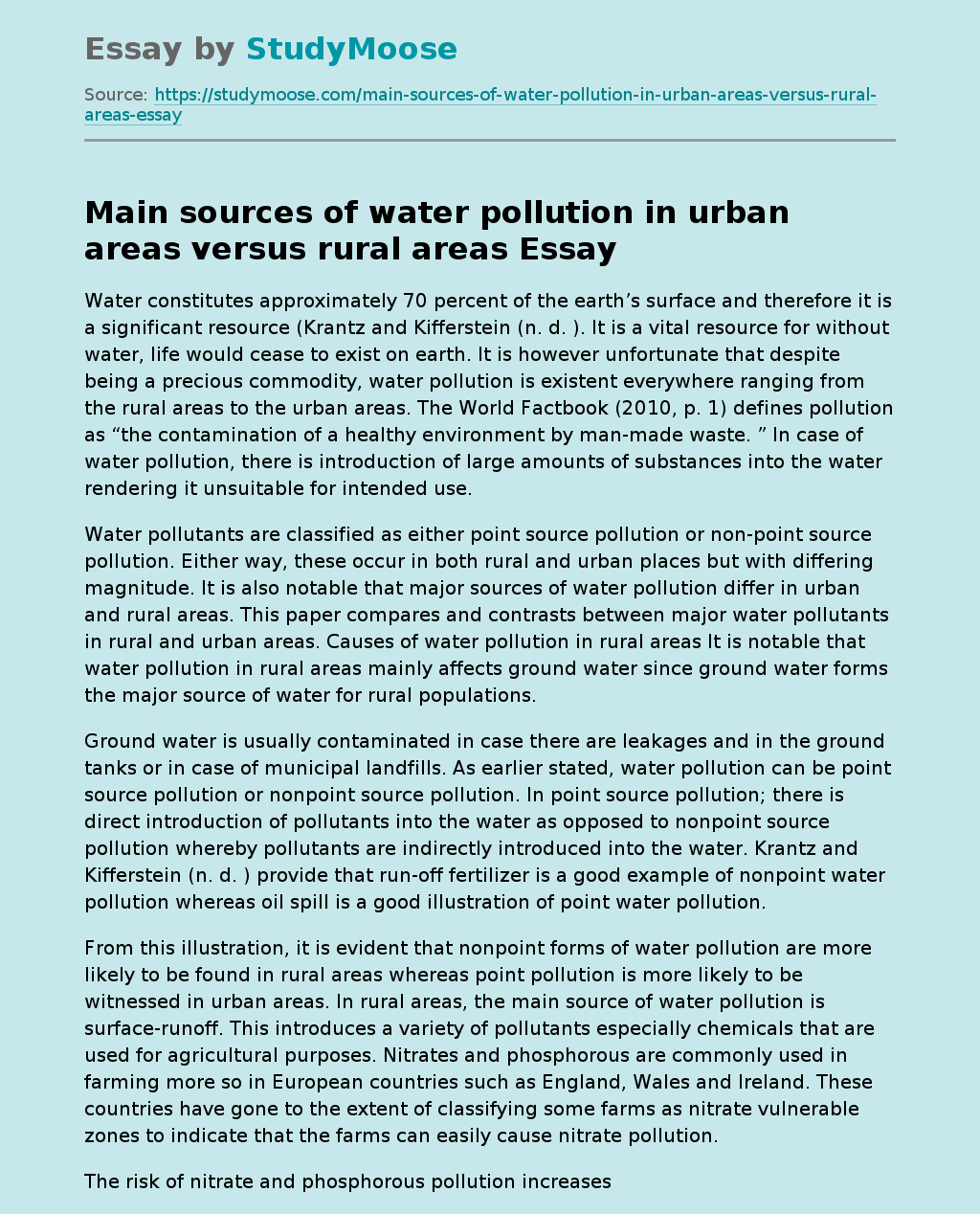