The television was invented in the early 20th century. It gradually evolved as more and more additions were made to it. Initially there were only a few channels with only a few programs. Today, the TV has so many channels that we can’t even count them on our fingers. All types of programs are being aired without a thought to timing and the audience that will be watching these programs. Thus, watching TV has done more harm, to us as individuals and to the society as a whole, than good.

Don't use plagiarized sources. Get your custom essay on
“ Watching Tv Does More Harm Than Good ”
Get custom paper
NEW! smart matching with writer

The TV does provide some good information and keeps us up to date with the latest news. Another good point about the TV is that it keeps us busy and doesn’t let us get bored. That’s about it. It does not help us in any other way. The TV destroys the culture of the country by showing what happens in other countries.

The general public will eventually adopt the ways which are being shown on the television channels. Apart from this, it consumes most of the free time available to us. This free time could have been put to better use by doing some social work or helping the community.

Children in the older days were more active and would have recreational activities which would help them grow intellectually and spiritually but nowadays most of their time is spent in front of the television.

All they do is go to school, come back and watch TV, get up the next day and go to school. TV has almost finished the need for sports, going to watch events and other things like that. People nowadays would rather just stay at home and watch these events from the comfort of their living room. It has reduced the need for outdoor activities and has made the new generation lazy.

One of the reasons of the weight problem is television. The new views that the current generation is adopting come from the TV and destroy the values that the society is built upon. In the olden days, children were sheltered and would not know much about society. Now, they know too much at a very young age as information is freely and easily available through the television. This leads to bad behaviour and the thought that they can get away with anything. Mostly parents think that making their child watch TV is good for him and he can learn new things.

In reality it is actually the opposite. A study shows that the more children watch television at a very young age, the more likely they are to develop attention deficit hyperactivity disorder. This results from the bold colours and the loud voices that characters such as Big Bird have. (Pigg, 2009) Other reasons given for the ADHD problem are that the scenes change quickly and rapidly, there are flashing lights, quick edits. All these over stimulate the child’s brain and result in the ADHD problem.

The child then learns to switch attention quickly from one object to another and for the rest of his life will not be able to focus on any one thing for too long. (Condon, 2009) These are not the only problems that result from watching too much television. When people watch television it contains many violent programs as well. This leads to more aggression in the audience which results in more criminal activities in society. Even cartoons are aggressive such as Tom and Jerry, with Tom running after Jerry and trying to kill him. This is what the general public is watching.

The National Television Violence Study found out that when a child watches television for 2 hours a day, he is likely to commit around ten thousand violent acts each year. From these ten thousand, five hundred are considered to be highly risky. (Kaiser Family Foundation) Another thing that happens to the society by watching violent television is that society as a whole becomes insensitive to violence happening in real life. If too much violence is portrayed on the news after some time, people will watch the news and not respond or feel sorrow.

To them it would be something that happens all the time and it wouldn’t matter. An opposite response can also occur, which would cause the whole society to live in fear. People would become fearful of the violent acts taking place and take extra precaution which may harm the society or community living that used to exist previously. (Kaiser Family Foundation) At large, television has harmed the society by bringing people to extremes, which is being fearful or being insensitive. It harmed the future generations by showing them violent acts in cartoons and by making them a patient of ADHD.

By individually affecting people, it has affected the society at large and reduced the hospitality that once existed among friends, family and neighbours. 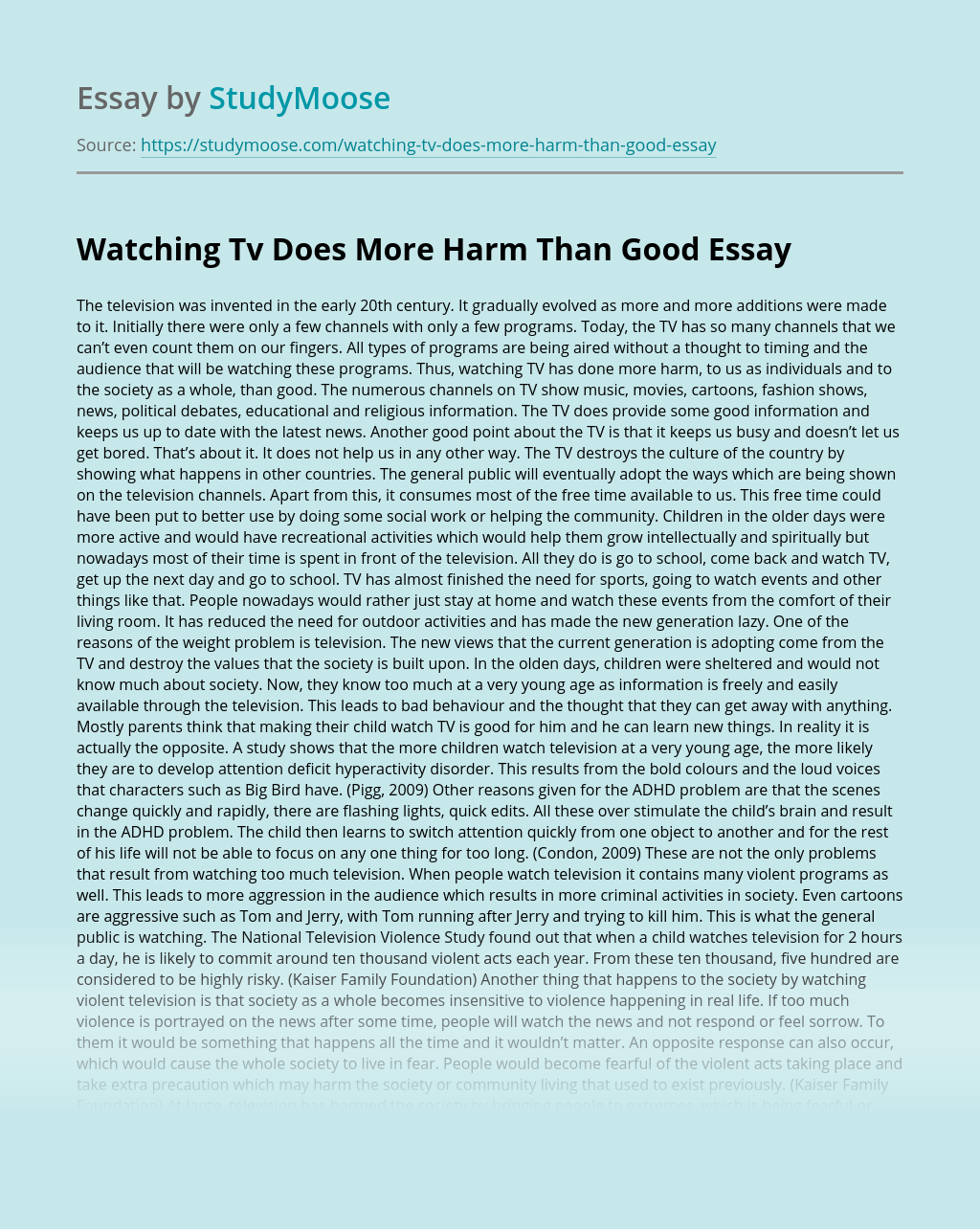