Was Andrew Carnegie a Hero?

Andrew Carnegie, the ambitious and skilled king of steel during the late 1800s, was the most famous man in business of his time. He certainly had his many flaws and as the most famous American of those days, his faults were highly talked about. Carnegie was not perfect and made his share of choices that many people saw as misdeeds, but that is like how everyone in the world is. Carnegie was a hero of his day because he showed the characteristics of being capable, responsible, and philanthropic.

Don't use plagiarized sources. Get your custom essay on
“ Was Andrew Carnegie a Hero? ”
Get custom paper
NEW! smart matching with writer

Carnegie had the skills to be a successful business man. Even from a young age, he worked as hard as he could to support his family. Pictures from the Carnegie Library of Pittsburgh (Document A) shows where Carnegie was born in Scotland. He lived in a small cottage with his family and resided in the attic from 1835 to 1848. The following picture displays the grand and luxurious Skibo Castle that Carnegie purchased in 1897. In about less than half a century, Carnegie became rich after living in poverty.

Heroes have an extraordinary capability that few others possess and for Carnegie, his capabilities lied in the world of business. However, just because of that, it doesn’t make one a hero. In addition to that, heroes do not take advantage of their skill to benefit only themselves. It is apparent in Carnegie’s article for the North American Review, “Wealth” in June of 1889 (Document B) that he sincerely believed that business being in the hands of few was a beneficial thing.

It is not that he did not care about his workers at all and purposefully tried to take advantage of their labor, he really believed that good came out of the rise of the wealthy.

He says, “(I)t is to this law (of competition) that we owe our wonderful material development, … while the law may be sometimes hard for the individual, it is best for the race, because it insure the survival of the fittest in every department”. Carnegie truly thought that those who work hard and become rich from it will bring improvement to society. Many opposing views of Carnegie’s time proclaimed that the laborers were the “good side” and that it was the employers who were in the wrong. Men like Carnegie, owners of large businesses, were viewed as evil and cruel. McClure’s Magazine reported in June 1894 reported the working conditions of the Homestead steel mill workers in Hamlin Garland’s article “Homestead and Its Perilous Trades”. But in Andrew Carnegie and the Rise of Big Business by Harold C. Livesay (Document J), it is reported that “Finally, in the late afternoon a truce was negotiated. The Pinkerton’s dropped their guns, and the strikers promised them safe conduct out of town. Unfortunately, the promise could not be kept… (T)he Pinkertons had to run the gauntlet of the howling mob.

When the battle ended, four guards were dead and all the others sustained injuries”. In this incident, although a truce had been called between the strikers and the guards, the strikers still attacked, which brought thought that Carnegie had to be responsible in dealing with the strikers. Historians are limited in by these documents because they are not informed of what other damages or effects the strikers might have had on Carnegie’s business. Carnegie knew what his job was and he knew what he needed to do to maintain his business.

To sum it all up, Andrew Carnegie was hero because he was capable, responsible, and philanthropic. Andrew Carnegie had tried his best in life to make his families and other people’s life better; easier. Because Carnegie was born into poverty, he understood the feelings of the poor, and when he became wealthy, he wanted to try to help those who are less fortunate to become a bit more fortunate to live better lives. Although some of his choices were not very good, he worked hard and wanted to do what he thought was best. Everyone makes mistakes time to time. That is why I believe that Andrew Carnegie was a hero.

Was Andrew Carnegie a Hero?. (2016, Mar 04). Retrieved from https://studymoose.com/was-andrew-carnegie-a-hero-essay 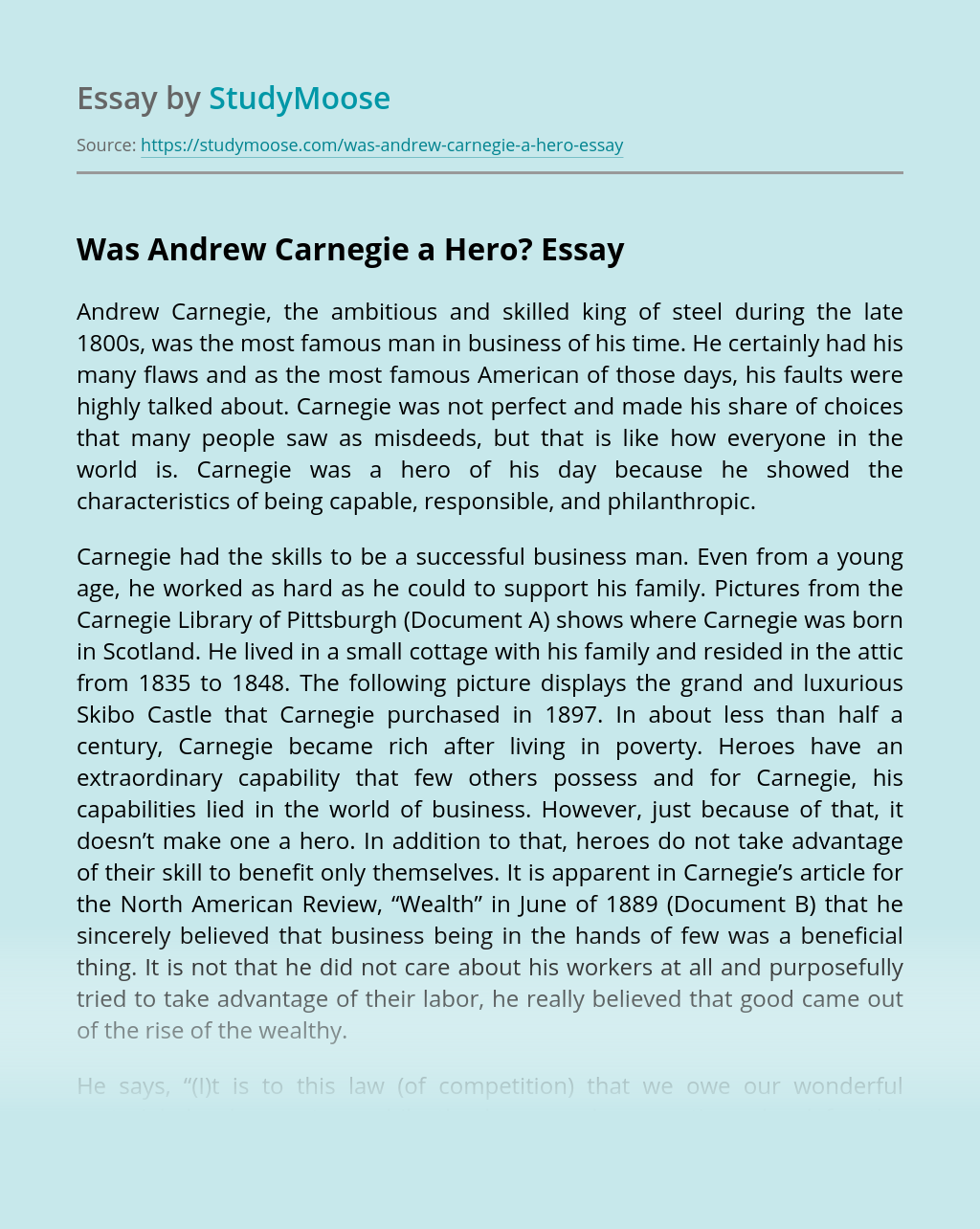