Walking In A Dream World: A Reaction to Waking Life

Waking Life, by Richard Linklater, is an unusual movie that was released in 2001. The movie was recorded with the same technology that any movie would use, but each scene has been colorized to give it an animated look. The colorization is not the same from scene to scene. Instead, each artist that Linklater employed brought their own style and vision to their particular portion of the movie (Linklater 2001). This approach mixes well with the movie itself, as it is about many different philosophical ideas and film theories.

Turn in your highest-quality paper
Get a qualified writer to help you with
“ Walking In A Dream World: A Reaction to Waking Life ”
Get high-quality paper
NEW! AI matching with writer

Waking Life is not an easy movie to understand, and it would likely take many viewings to fully take in every point brought up by Linklater. Despite being very deep, Waking Life is incredible to watch and hard to get out of one’s mind. Waking Life begins with a scene of two children playing a simple game (Linklater 2001). The answer to their game is, “Dream is Destiny” (Linklater 2001). That one phrase seems to wrap up the movie in one concise package.

The whole movie is about one man who feels that he is in a waking dream than he cannot wake up from (Linklater 2001).

Every time he thinks that he is awake, odd things happen around him that make him know he is not awake. For example, there is discussion in the movie about the fact that a light cannot be turned off is one is in a dream (Linklater 2001). The main character tries to turn off the light, and finds that he cannot.

Even though things are real to him, he is constantly in a dream. It seems to this viewer that perhaps Linklater is “illustrating” that fact that most people glide through their lives, not noticing the small things, almost as if they are in a dream.

We all know what our places in life are, such as where to go to school, where to go to work, and where home is. None of this takes much thought. The only place where we seem to have deeper thoughts is in our dreams. For the ordinary person, a dream is their only destiny, and their only place to be all they desire to be. During Waking Life, several people weigh in with their ideas of time and space. One character believes that we could be the final reflections of someone else’s life as they prepare to die (Linklater 2001).

Another character mentions a theory by Timothy Leary that claims the brain remains alive for six to twelve minutes after death (Linklater 2001). If a lifetime in a dream takes just a moment, then who is to say that our whole existence is not encompassed by someone else’s dream? This viewer finds the whole concept of being someone else’s dream very interesting. Honestly, sometimes it would be very hard to know the difference, because some dreams seem so real.

The idea that I am able to sit at a computer and type an opinion about someone else’s opinion has a very circular quality to it, and I think that is another one of the points that Waking Life tries to make. While we may not all be a dream, we are all influenced by what other people do. As another example, a character speaks of a crossword puzzle experiment that seems to prove that once knowledge is attained, it is shared by some sort of human collective mind (Linklater 2001). I know information because someone else knew information, although I expand upon it. What I share with the world will be expanded on by others, and so on.

Really though, everything comes back to the first thought, and that is what creates our reality. During the course of Waking Life, the main character begins to be angry that he cannot seem to wake up from his dream (Linklater 2001). I personally believe that he does, several times, and that is where the dialogue that sounds like bits and pieces of commercials on television comes from. His real life is so dull compared to what he is experiencing in his dream life that he simply falls back to sleep. However, the man is of the opinion that he must either be dead, or nearly dead, and that is why he can never wake up (Linklater 2001).

He is bothered by his “dream state,” but other people he meets in his dreams encourage him to make the most of what he is experiencing (Linklater 2001). One character tells him that there aren’t enough dreamers anymore, and so he should always dream, not only with his mind, but with his whole being (Linklater 2001). Other characters tell him of their own dreams. Most come to the conclusion that dreams changed them for the better, and made their lives something different than what they had ever expected. However, our main character is ready to get out of his dream.

He is told by another character to simply wake up (Linklater 2001). This viewer believes that the idea of simply waking up applies to both dreams and to real life. As noted before, some people spend their lives in a stupor, never bothering to really live. If they wake up from their “sleep,” they are going to have to face life head on, and actually do something with it. Like the simple children’s game that started the movie, the idea of “Dream is Destiny” applies here as well. We do not have to live in a real dream, but our dreams can become our catalyst for change.

Dreams can be had while we are awake. We can dream of what we really wish for, our destiny. The end of the movie is rather puzzling. The main character seems to awake, but when he attempts to enter his car, he misses the handle and floats away (Linklater 2001). Is he still dreaming, or has he finally reached his destiny? We will never know. However, perhaps we can learn from his actions. He refused to dream, and he disappeared. This could mean that a person who refuses to open his eyes and accept his life is destined to never make his mark on the world.

When he rejects his dream, he rejects himself. All in all, I greatly enjoyed this movie. There is so much more that I could say about it, given the space. The idea that most of us sleepwalk through life really struck me, because I believe that is what nearly everyone does. We settle for things, and we never see our dreams through. This movie has led me to think about my life, and perhaps to wake up and find my destiny, instead of just floating through life. Works Cited Linklater, Richard. Waking Life. Fox Searchlight Pictures, 2001.

Walking In A Dream World: A Reaction to Waking Life. (2016, Aug 24). Retrieved from https://studymoose.com/walking-in-a-dream-world-a-reaction-to-waking-life-essay 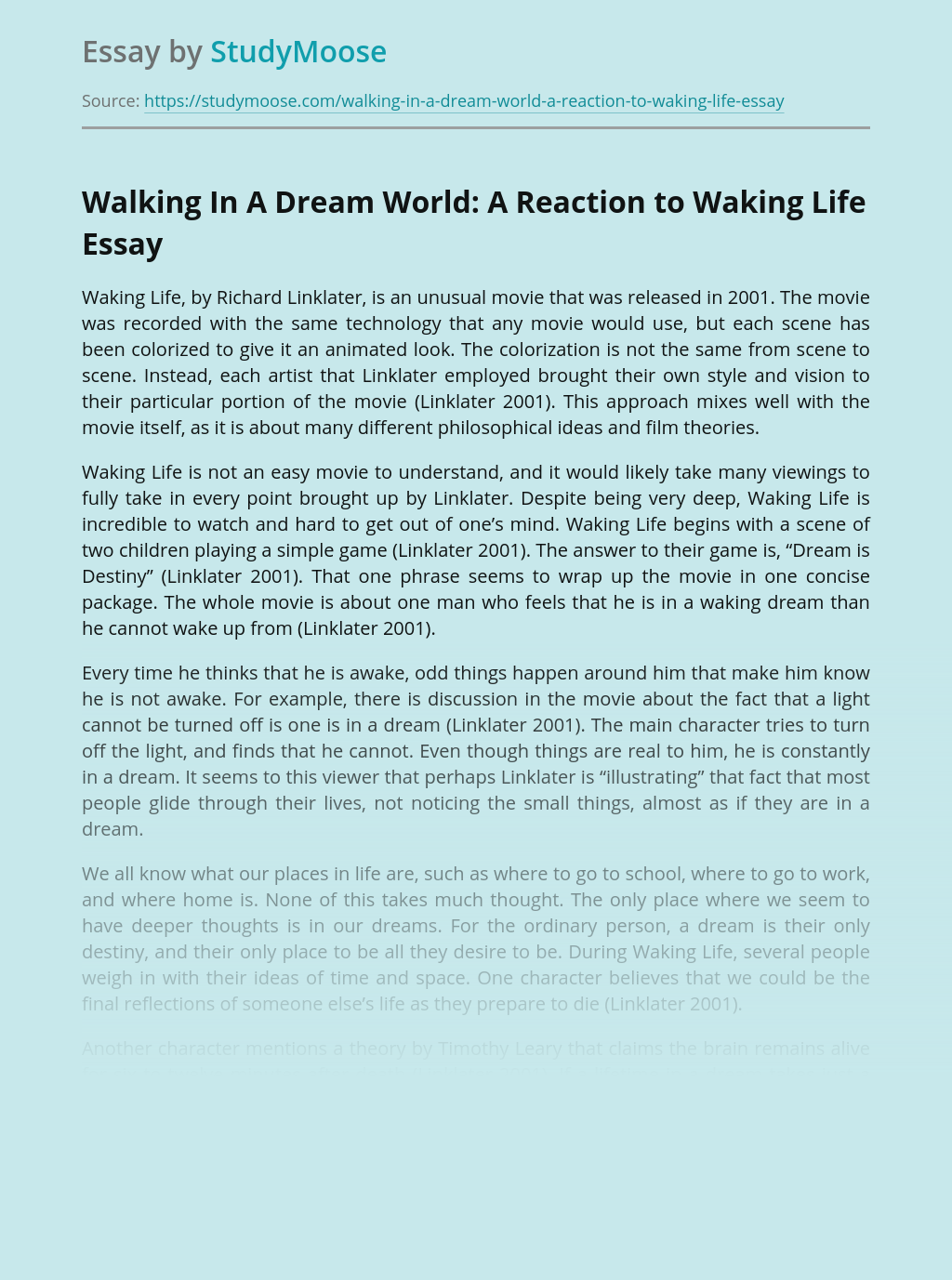 Turn in your highest-quality paper
Get a qualified writer to help you with
“ Walking In A Dream World: A Reaction to Waking Life ”
Get high-quality paper
Helping students since 2015
Stay Safe, Stay Original