A Walking Holiday in Costa Rica by Mary Novakovich

You’d have to have been living on another planet for the past half-decade not to have clocked the rise and rise of the Red City, Marrakesh. While five-star resorts have proliferated right up to the walls of the 1,000-year-old medina, inside them, along its chiaroscuro labyrinth of alleys and lanes, chic and unique riads have upturned and elevated paradigms of Moroccan design and service. Urbane and luxurious, Marrakesh now feels like a place where there’s nothing—or close to nothing—you can’t have.

Don't use plagiarized sources. Get your custom essay on
“ A Walking Holiday in Costa Rica by Mary Novakovich ”
Get custom paper
NEW! smart matching with writer

Which is why the places to look for the real Morocco often lie far from the burnished suites and buzzing restaurants of this city on the plain. Striking out for the farther reaches of the country is rewarded with unique takes on traditional hospitality, both new and timeless. They can be found deep in the southernmost region, where ungenerous stone begins to surrender to the saffron-gold sands of the Sahara; or high among the towering Atlas, where Berber culture has its oldest and still strongest roots, and brilliant colors and tribal traditions flourish amid sometimes indescribably severe natural beauty; or along Morocco’s coast, whose whitewashed, fortified villages reflect both European colonial history and Islamic mystery.

Far below the historic Berber stronghold of Zagora, in the Drâa valley, where only the faintest tire-tread marks indicate your path, my guide and I speed in our Toyota 4Runner past a scene of cinematic emptiness, shaded in the non-tones of the desert. After an hour’s drive from the town of M’hamid, we reach, of all things, a schoolhouse, set on a small rise; here, a 4 x 4 awaits to shepherd me to Erg Chigaga Luxury Camp.

The brainchild of a transplanted English hotel executive, Nick Garsten, and a Berber desert guide named Moustafa Boufrifri, known to all as Bobo, the camp lies in the Erg Chigaga dunes, which climb to heights of 1,000 feet. The eight traditional caidal tents are connected by twin pavilions with ornate blackwork on their exteriors; inside, the walls are striped in bold red and cream, and thick pile rugs line the ground. Bathrooms have hand-worked metal vanities and hot- and cold-water buckets on teak platforms for hammam-style bathing (which uses only about one-tenth of the water required by a conventional shower—a crucial concession here, where it is the most precious commodity).

Crimson wool runners crisscross the camp, from tent to tent and from dining to leisure pavilions; at night they’re banked with lines of glowing lanterns. Flanking one edge of the main area is a row of palm trunks, between which are suspended several hammocks—what Bobo charmingly refers to as Erg Chigaga’s “chill-out zone.” Bobo himself—supremely competent and drily funny in five languages—lopes about in his cobalt-blue turban and djellaba, pouring shots of “Berber whiskey,” the ubiquitous and wickedly strong mint-tea blend. Two newer and more private tents, set about a 15-minute walk from the main camp, make excellent honeymoon destinations. The energy of Erg Chigaga seems prevailingly friendly and informal—a place to leaven the intrigue and high romance quotient of a desert bivouac with doses of extreme-ish activities (sand-boarding to the south; late-afternoon camel treks) and easy camaraderie around the fire after sunset.

About 20 miles from Erg Chigaga, in the taller dunes at the edge of the ancient Iriki lake bed, is an encampment conceived for those who seek desert romance of the writ-large, Lawrence of Arabiavariety—and are willing to pay top dollar for it. The Camp of Dar Ahlam is a one-night experience as part of a longer stay at the elegant guesthouse of the same name in Skoura, some 200 miles to the northwest. First set up in 2007 as a single tent, it has expanded over the years, and can now accommodate as many as 30 people, but is still meant for only one group at a time. During my stay I am looked after by Ahmed, the camp manager, and a small staff. The camp reprises the narrative theme for which its namesake hotel (“house of dreams,” in Arabic) is known: my stay unspools in a series of mise-en-scènes straight from a Thesiger passage—or a Ridley Scott epic.

My tent is of the simplest white canvas, lined in sisal and furnished with a low wooden bed and an embossed-brass table surrounded by kilim-covered cushions. At dusk, I sat ensconced in a Roorkhee chair in front of it, enjoying an aperitif (served on estate silver), surrounded by towering mounds of the Sahara, their summits shaped to paper’s-edge fineness by the wind. I had no inkling of the production happening one dune away, until Ahmed came to collect me for dinner; a trek over its crest revealed a tent surrounded by lanterns and, inside, lambent with the glow of multiple candelabras. A table was set opulently enough to please a cherifa. I was served a tangia, a meat stew prepared in a terra-cotta urn and slow-cooked overnight in a wood-fired oven.

A Walking Holiday in Costa Rica by Mary Novakovich. (2016, Aug 19). Retrieved from http://studymoose.com/a-walking-holiday-in-costa-rica-by-mary-novakovich-essay 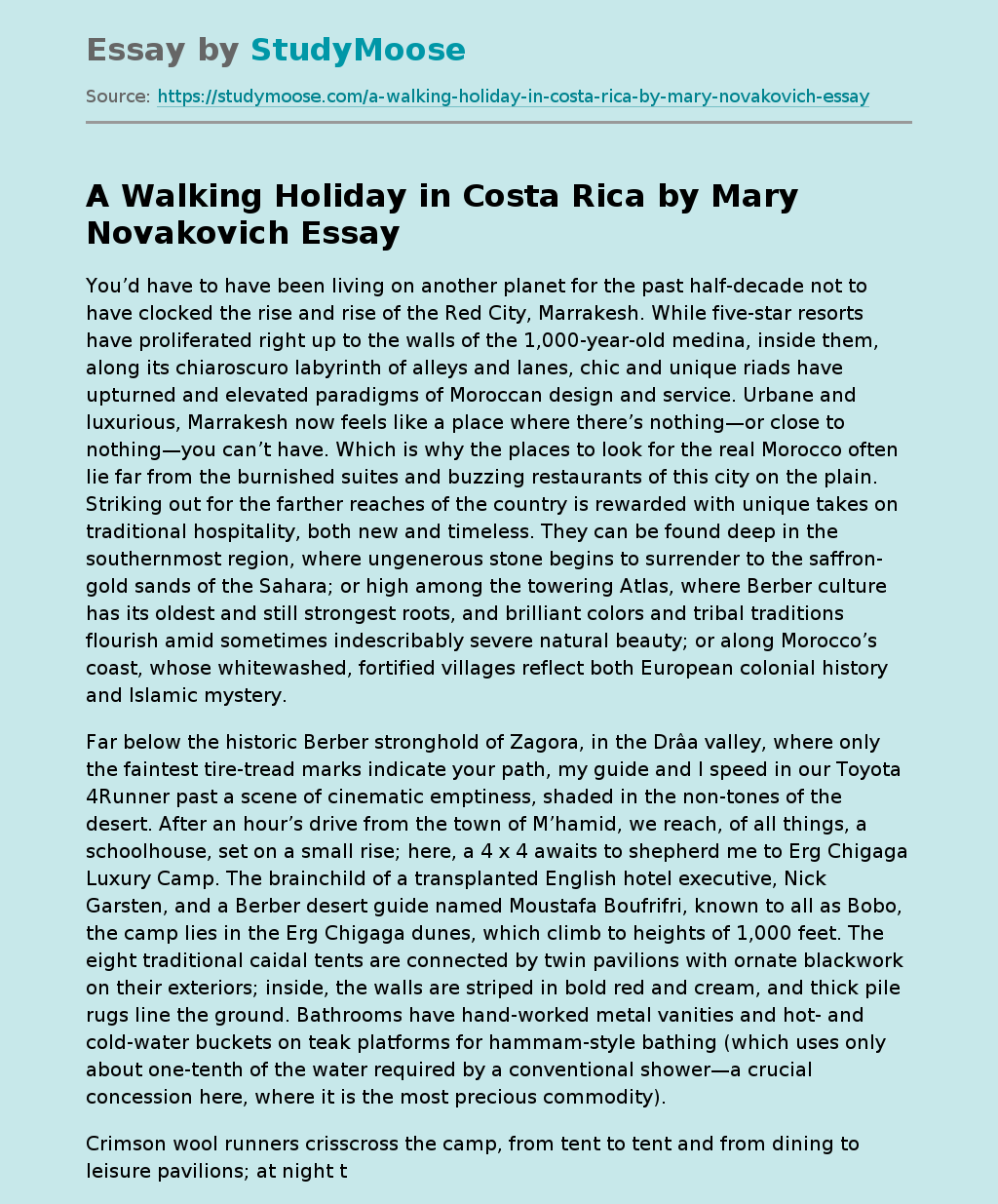