How does Bel-Imperia’s behavior contradict Juan Vives’ Instruction of A Christen Women?

The Spanish Tragedy by Thomas Kyd, a play about revenge, honor, love and tragedy, was published in the late 1580s. A little before its publication, The Instruction for a Christen Woman by Juan Luis Viveswas published in 1524. During this time, the roles of women were tending to their children, husbands and homes. According to McDonald, “…women occupied a position subordinate to men in the early modern period is beyond dispute; that this was the ‘natural’ state of affairs was almost beyond dispute” (2001).

Don't use plagiarized sources. Get your custom essay on
“ Bel-Imperia, a Walking Contradiction ”
Get custom paper
NEW! smart matching with writer

The belief that women were inarguably inferior was naturalized during the transition between the late middle ages and early modern times.

In The Spanish Tragedy, agency and power was given to the main female character, Bel-Imperia. Thomas Kyd stepped out of the traditional thinking of his time and characterized her with the wit, intelligence and bravery of a man. The play begins with Don Andrea as a ghost and claims that he has died out of love; he battled in war in the name of Bel-Imperia, a love affair that was forbidden.

Horatio, Don Andrea’s best friend, informs Bel-Imperia that he did not die a fair death and was murdered by Balthazar. She is devastated by the news and decides to avenge the death of Don Andrea by falling in love with Horatio to spite Balthazar:

But how can love find harbor in my breast/ Till I revenge the death of a beloved?

Bel-Imperia knows that she is the object of Balthatzar’s affection and uses it to her advantage by tormenting him. The royal family believes the unity of Balthazar and Bel-Imperia would be a perfect marriage since as it would repair the peace with Portugal and Spain, thus encouraging Balthazar to pursue her even more. When her brother, Lorenzo, visits her with Balthazar, she speaks out against him.

It was very uncommon for women to argue with men or speak against them during that time as it was improper and “unlady-like”. According to McDonald, “One of the most frequent forms of abuse directed against educated women was the equation of eloquence and promiscuity: looseness of tongue came to symbolize looseness of body and spirit” (258). Kyd demonstrates the usage of power and courage of Bel-Imperia through the stichomythia with her brother and Balthazar in act one, scene four:

Bel-Imperia: That for awhile I wish no company.

Lorenzo:But here the Prince is come to visit you.

Bel-Imperia: That argues that he lives in liberty.

Balthazar: No, madam, but in pleasing servitude.

Bel-Imperia: Your prison then belike is your conceit…(lines 77 through 99)

After the discourse, Bel-Imperia purposely drops her glove for Horatio to pick up. During the period, women’s gloves symbolized the women’s choice of who they love, a form of courtly love. She cunningly drops the gloves for Horatio in front of Balthazar, to let Balthazar know that she does not care for him.

Bel-Imperia: Thanks, good Horatio. Take it for they pains.

It was very common for families to arrange marriages for their daughters. Another example of Bel-Imperia acting against the female stereotype is rebelling against her families’ wishes. She chose to love Don Andrea against her parent’s wishes and refuses to marry Balthazar even when forced by her father, the Duke of Castile, and her uncle, the King of Spain. Especially coming from a powerful family, it is unheard of when a woman opposes her arranged marriage:

Marriage was part of a system of inheritance and economics so ingrained and pervasive that the emotional affections or physical desires of a man and woman diminished in importance. This was especially true among the upper classes…where marriage was regarded as a convenient instrument for joining or ensuring peace between two powerful families…for achieving other familial, financial, or even political ends (266).

Furthermore, it is also stated by Juan Vives,

…that it becometh nat a mayde to talke, where her father and mother be in communication, about her mariage..And let her thynke that her father and mother, wyll provide no lesse diligently for her, than she wolde for her selfe: but moche better, by the reason they have more experience and wysedome (76).

These excerpts prove the prominent role that Bel-Imperia plays. She has the power to mend the relationship between countries and political relevance through her families’ guidance. However, she chooses not to and has the will to act on her desires and motivations which is the vengeance of Don Andrea’s death.

Since their father is adamant about the marriage between Balthazar and Bel-Imperia, Lorenzo suspects the love affair between his sister and Horatio and bribes her servant to murder Horatio. Kyd portrays Bel-Imperia as a testament of strength as she is not a victim of the tragic deaths of her lovers. Unlike Horatio’s mother, Isabella, who was driven mad by his death and committed suicide, Bel-Imperia has the strength to carry on and participate in Hieronimo’s revenge play.

Bel-Imperia cuts herself and uses her own blood to write a powerful letter to Hieronomo. Again, Kyd makes her character contradict the traditional views of women as weak and ineffective. She is the reason that Hieronimo finally avenges his son’s murder and the motivation behind his plot. Machiavellianism plays on Bel-Imperia’s part when she tricks Balthazar and Lorenzo into believing she is harmless by pretending not to be intelligent:

Brother, you are become an orator

I know not, I, by what experience

Too politic for me, past all compare,

Bel-Imperia took advantage of their self-admiration and struck when unexpected. She avenged Horatio by doing so as he was also attacked when most vulnerable; he was unexpectedly murdered when he and Bel-Imperia were about to make love.

Even though she is a woman, Bel-Imperia convinces the audience that she is just as capable of avenging the deaths of Don Andrea and Horatio as any other man. Her character contradicts the traditional view of passive and obedient women during the renaissance. 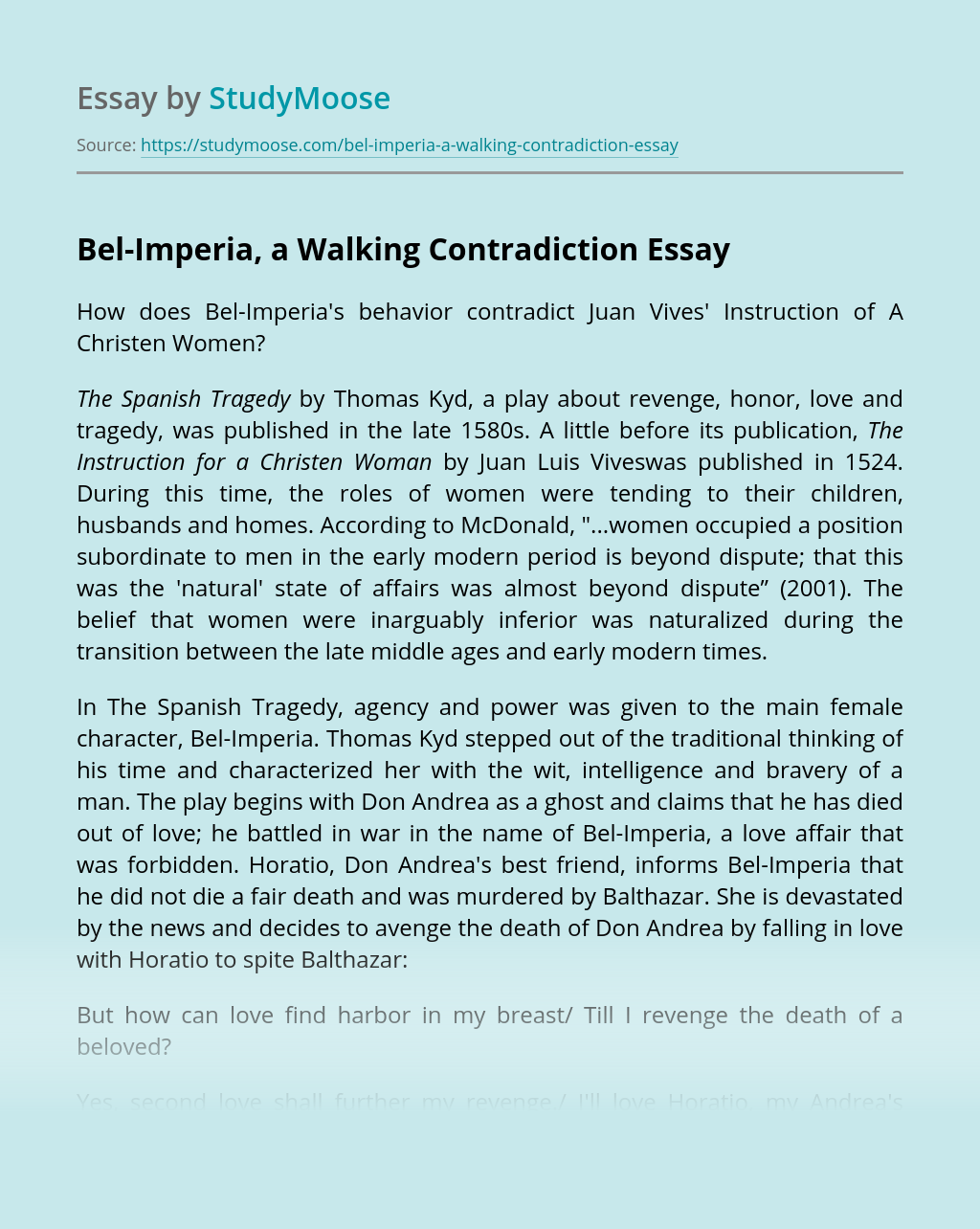