In this piece of coursework I am going to be carrying out an investigation into a village, in order to find evidence to answer a series of geographical questions, which all centre around one main question which is:

‘Is Pirbright a suburbanised village?’

In order to answer this question I will need to follow a sequence of investigation, which consists of four main steps:

In this part of the investigation I will be looking at the background information.

Don't use plagiarized sources. Get your custom essay on
“ The Pirbright village ”
Get custom paper
NEW! smart matching with writer

I will start by looking at the theoretical background, saying what a suburbanised village is, before looking at how the location of the village affects whether it becomes suburbanised or not.

I will then move onto the geographical background, saying where exactly Pirbright is and what I would expect the village to be like judging from its location.

In order to collect the data I will need to visit Pirbright and collect sources of both primary and secondary data.

Whilst I am in Pirbright, I will be collecting evidence to answer the main question by completing the following:

There are no real limitations in the ways we are going to collect the data, except for the time limit which may not give us enough time to explore the village in as great depth as we may have liked.

This is a key part of my coursework in which I will look at each piece of data and say whether it is evidence saying that Pirbright is suburbanised, or if it is evidence showing that it is not.

What is a suburbanised village?

How does the location of a village affect whether it becomes suburbanised or not?

A city consists of four main parts: The Central Business District(CBD), the inner city area, the outer city area and the suburban parts of a city, also known as the green belt area. An example of this is shown in the diagram below with the city in question being Guildford.

A green belt area is an area located just outside the outer city area, in which areas are designed to remain free from development. The reason for this area being there is to prevent urban sprawl encroaching into the countryside, and also to prevent the merging of neighbouring towns. The area surrounds exisiting major urban areas. It provides open land for recreation, and protects agricultural land.

These green belt areas are the reason as to why villages become suburbanised. The population of cities such as Guildford will obviously expand due to urban migration, and as more people migrate, the availibility of houses within the city will decrease. This is especially true of Guildford, as it is located within the South-East of England.

Therefore, as there is no housing available within the CBD or either the inner or outer city areas, the people searching for housing will have to go further out of the city, and as they are unable to build their property on the green belt area they will therefore have to build on the area just outside the green belt area, therefore, meaning that the population of the area on which they build upon will gradually increase as other people go through the same procedure and eventually end up having to build on this area. 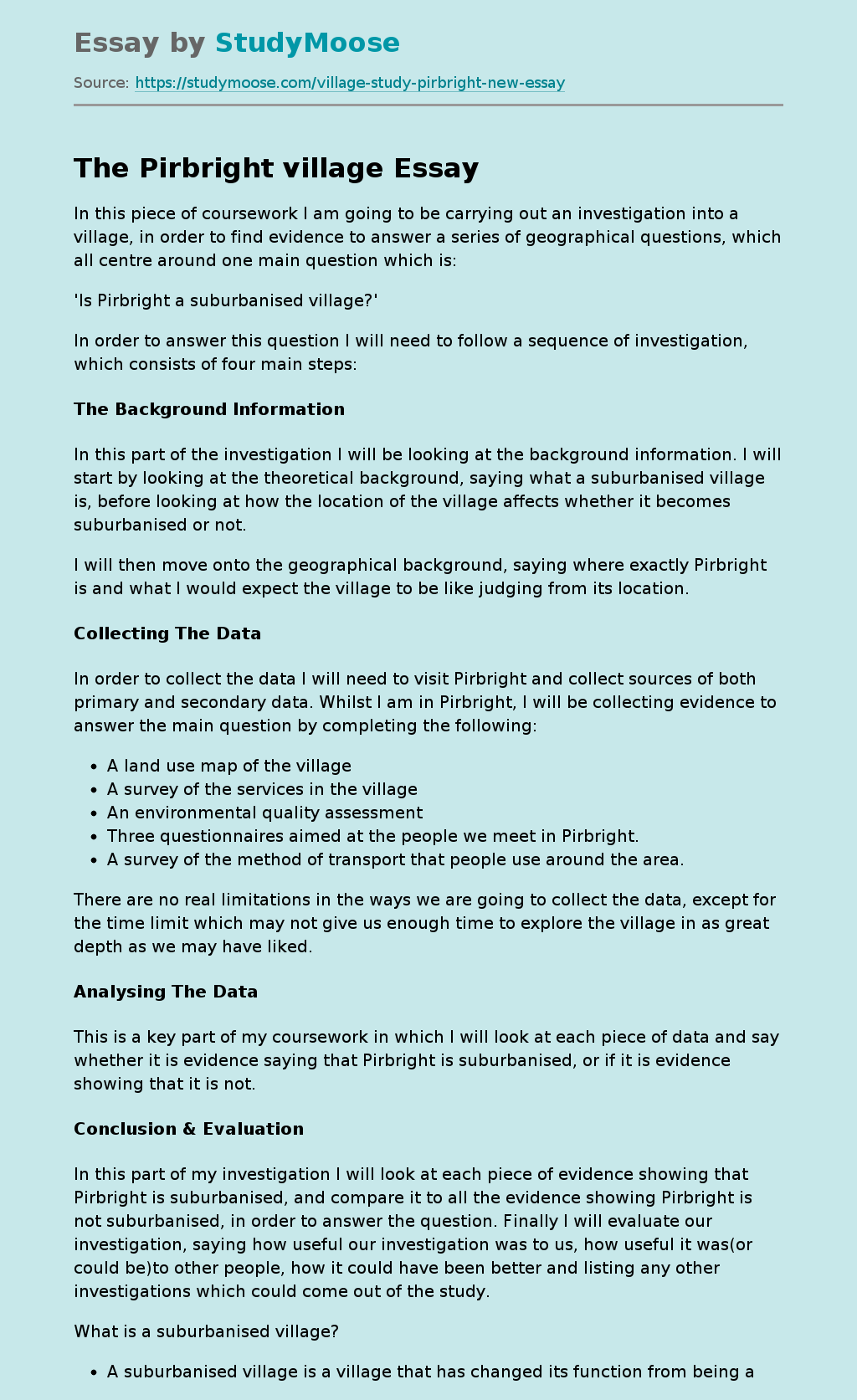