In the modern era our society is face a problem with the fuel of automotive vehicles in our present research we trying to solve somehow fuel problem in the old two wheeler vehicles at dry condition by making an assembly for it. It strikes a right balance between fuel consumption and pollution control and can be optimized effectively in future generation vehicle. A hybrid motorcycle capable of mounting thereon a hybrid type drive unit, which does not project in a vehicle width direction and can be mounted even on a having a limited vehicle width, includes a power distributing device positioned between a generator and a motor, and a reduction device arranged rearward of the transmission device is journeyed on a rear end of a central storage casing so that a rear end of the drive-wheel transmission device.

Don't use plagiarized sources. Get your custom essay on
“ Development Of Two Wheeler Motorcycle With An Alternate Power Source During Dry Condition ”
Get custom paper
NEW! smart matching with writer

Technological advances make the human life more comfortable, but on the other hand, these advances cause many problems and damages in the human life such as environmental pollutions.

Fossil fuels consumption in the vehicle engines contaminates our environment and this is one of the main issues in this regard. Reducing environmental pollutions is a global plan nowadays, and using electric and hybrid Electric vehicles and substitution fuels such as ethanol are among the solutions to reduce the emissions or not to let them increase. The hybrid technology and hybrid electric vehicles are put forward as a new argument and because of its specifications, it is expected that this technology becomes more and more popular.

Since 1998, the commercial hybrid electric vehicles are introduced in the market. Fuel consuming motorcycles are one of the ordinary vehicles in the urban transportation. Urban transportation requires a low output power and it causes the incomplete combustion and more air pollution because of the low permissive speed and many cycles of braking and movement. So, many researches all over the world have been trying to solve this problem by different methods such as hybrid concepts. Until today, a few Companies produced some experimental models of the HEM. For example, Yamaha has introduced a hybrid motorcycle which was named Gen-Ryan in the 39th Tokyo motorcycle exhibition. ECycle Company in the United States has produced another hybrid motorcycle model named EC1 with Brushless motors. In this paper, at first an ordinary ICE motorcycle is simulated. Then a converted hybrid is simulated and compared with the simulation results of the ICE motorcycle. A BLDC motor is installed in the front wheel. A central electronic control unit is used to change the motorcycle modes. In Iran there are around 8 million motorcycles. Almost one third of that is in the capital Tehran. Therefore, there is a real need to reduce the motorcycle emissions. A hybrid fuel-cell motorcycle was designed by some researchers in Iran, but the present HEM is the first prototype in Iran.

As according to IOCL (Indian Oil Corporation limited) and HPCL (Hindustan Petroleum corporation limited) the average distance between two petrol stations is somewhere about 6 kilometers to 8 kilometers so many times two wheeler Consumers mainly face some hazardous situations during dry state of vehicle so this system going to empower the system which will help consumers to reach nearest fuel station on alternative source This is nothing but battery. And other time it will work as a hybrid system.

[1] S. Vanangamudi, S. Prabhakar, C.Hamotharan and R. Anbazhagan. Hybrid Two Wheeler (2014) Says The project of fabricating a hybrid two wheeler was completed successfully. It strikes a right balance between fuel consumption and pollution control and can be optimized effectively in future generation vehicle. A hybrid motorcycle capable of mounting thereon a hybrid type drive unit, which does not project in a vehicle width direction and can be mounted even on a having a limited vehicle width, includes a power distributing device positioned between a generator and a motor, and a reduction device arranged rearward of the transmission device is journal on a rear end of a central storage casing so that a rear end of the drive-wheel transmission Device.

[2] Arun Eldho Alias1, Geo Mathew2, Manu G3, Melvin Thomas4, Praveen V paul5, Energy Efficient Hybrid Electric Bike with Multi -Transmission System (2016)says In automobile sector, the need for alternative fuel as a replacement of conventional fossil fuel, due to its depletion and amount of mission has given way for new technologies like Electric vehicles. Still a lot of advancement has to take place in these technologies for commercialization. The gap between the current fossil fuel technology and zero emission vehicles can be bridged by hybrid technology. Hybrid vehicles are those which can run on two or more powering sources fuels. This technology maximizes the advantages of the two fuels and minimizes the disadvantages of the same. The best preferred hybrid pair is electric and fossil fuel. In this paper the Hybrid bike system, the power is delivered both via an internal Combustion engine and electric motor. The electrical power is used to achieve either better fuel economy than a conventional vehicle, better performance and it cause less pollution. Driving mode selectivity improves this system more economical, stable and more efficient.

[3] Behzad Asaei, Seyed Hosein Seyed mohammadi Aghil Yousefi koma, Mahdi Habibidoost, Design, Simulation, and Implementation of an Electric Hybrid Motorcycle(2011) Hardware Design Considerations for an Electric Bicycle Using a BLDC Motor says A traditional bicycle is a two-wheel vehicle that is propelled by the rider who delivers muscle power through pedals that rotate one of the two wheels. The rider steers the front wheel to create a force that returns and maintains the vehicle centre of gravity into a stable zone whenever necessary, thus keeping the bicycle upright. An electric bicycle carries batteries that deliver electric power to a motor that is coupled to either wheel. In most electric bicycles the rider can chose to use muscle power to deliver all, part, or none of the propulsion power required to maintain an adopted travel speed. Some models even sense pedal pressure and command the motor to deliver more power whenever the rider pedals harder.

To make an impactful futuristic project to achieving our aim we have to consider some parameters which are as follows:

Problem which we could going to face:

As vehicle moves on primary engine that time external batteries will charge as our alternator is also moving and battery will charge as vehicle comes to dry state then consumer will switch off the main engine and switch it too external propulsion system which is hybrid system . Then as we know voltage is directly proportional to speed and current is directly proportional to current so as the consumer rotates the throttle which is on the ill side (left side) the throttle position sensor will sense the angle and give signal to controller which is brain of whole system which will gain values from sensor and then provide and give optimum value of voltage to the BLDC motor to drive according to consumer use. So as the value of voltage varies then speed of motor will also varies this is how our system will work. And diagram shows how our prototype will look like.

Components of system and specification:

An as we know the relation between voltage and current in regards to electrical terms is directly proportional Whereas Voltage(V) increases so the speed(N) will also increases.

CASE 1: At where speed is zero where max torque is needed to initiate vehicle to motion where voltage on throttle sensor is low

CASE 2: At where speed is max and torque is low where voltage is max so speed will be high Then, total voltage according to our Prototype =no of battery X voltage of normal battery(12v) so the current will also fluctuate according to value of current.

Then the weight of all loads=Total weight of two passengers + Weight of motor cycles + Other miscellaneous loads.(N)

Force on a front wheel equal to force on a rear wheel Force (Ffw) = Force (Frw) = Frw/2 (N) nothing but load distribution.

Then Reaction on both wheel Rfw = Rrw (According to fig ) =0.2 X Rwr Then to calculate Torque on each wheel, Total Torque = Tfw + TrwTfw = Rfw X (Diameter of wheel/2)(Nm)

This is how we will get and acquire the speed on both the cases according to voltage variation.

This will help in several ways listed below:

As after 5 years there will lots of two wheeler vehicle will be second-handed so we could assemble this system and provide a vehicle to optimizing condition.

Our systems will not going to produce any pollution as its secondary system is electrical propulsion system.

More important it will help consumers to reach nearest fuel stations at dry condition of vehicle and tackle so many dangerous situations.

As more futuristically we could make an embedded system which will be combination of controller and ECU (electronic control unit) which is very important part of every motorcycle nowadays. 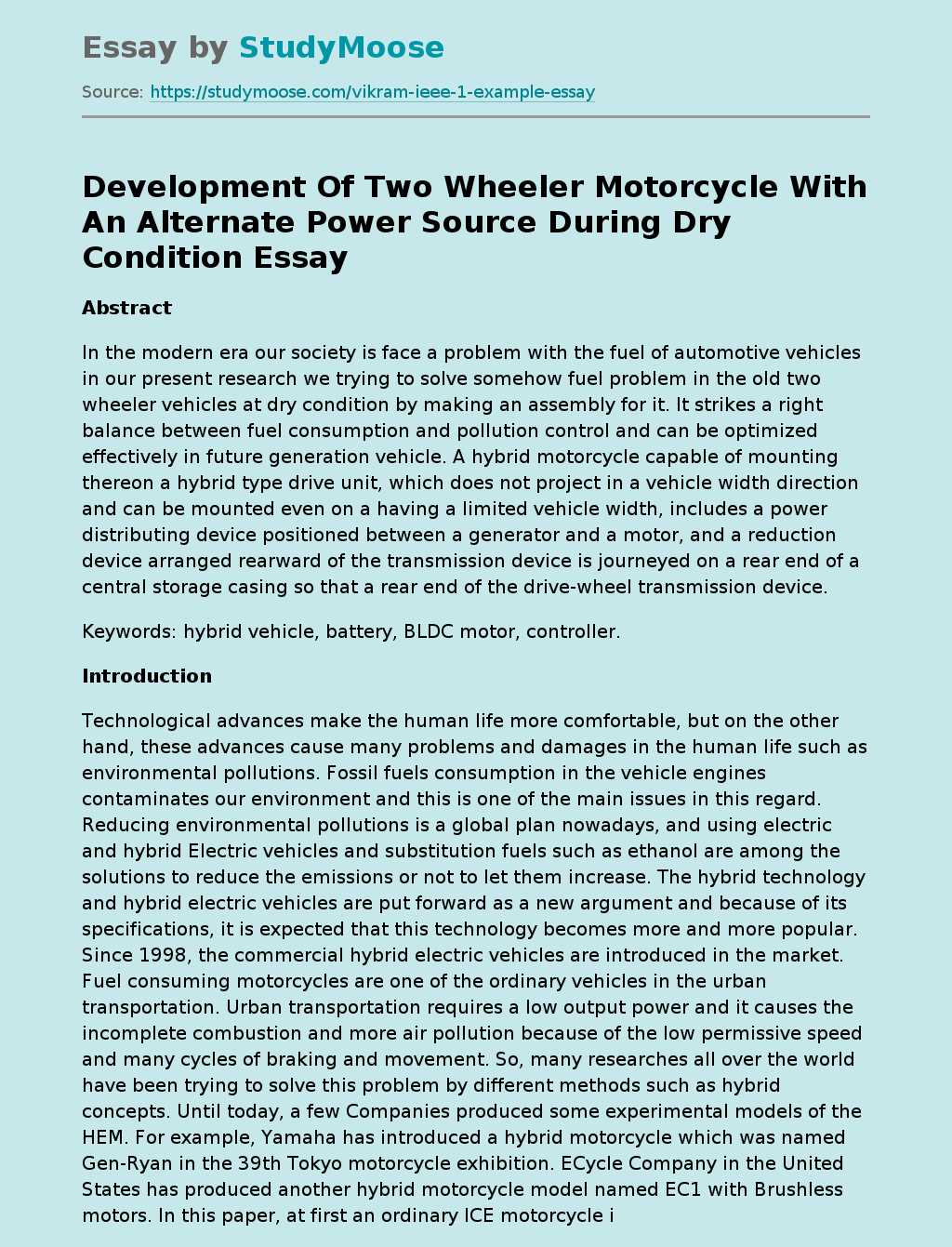