Johnny had noticed from a distance that the church we had been hiding out in was ablaze and there was a crowd of locals standing around it not doing anything but just staring at the towering flames. Dally accelerated on past the church. “What are you doing?” I shouted, “They may need help we can’t just leave them!”

“Are you stupid Ponyboy? What do you think caused that fire, hmm?”

“I don’t know it could have been anything.”

“No you and Johnny, Ponyboy! You two must have left a butt alight and it must have caught fire and brought the whole place up in smoke! Do you realize what this means Ponyboy? As well as being up for assault you two can now be charged with criminal damage on that church, you ‘re lucky you only wounded that Soc and didn’t kill him.

Don't use plagiarized sources. Get your custom essay on
“ The Outsiders Alternate ending ”
Get custom paper
NEW! smart matching with writer

“We’d better get out of here real quick! I think it’s safe enough for you two to come home now.

Darry and Sodapop have been worried sick about you, Ponyboy.”

“I’d believe you that Sodapop might be worried but I doubt Darry even knows that I have gone!”

“What are you talking about Ponyboy? Darry’s really sorry he hit you. He’s been worried sick since you ran away and when he heard that you two had stabbed a Soc he went out of his head with worry!”

“Yeah I’m fine I’m just thinking about the stuff that’s been happening over the past few days.

We had reached the interstate and were on our way home as the sunrise, a beautiful golden orange shining over everything. Darry was his usual self, cussing every five minutes about cars that cut in front of him. We finally reached home about an hour later I was a bit wary of going home but Johnny and Dally said I should. I went in cautiously not knowing what to expect from Dally. But he was crying, yeah that’s right crying. “What’s wrong?” I asked

“Nothing just happy to see you back in one piece.”

“You ready for the rumble Ponyboy?” said Two-bit.

“You know it Two-bit. I’m ready to kick some Soc ass”

We were all hyped about the rumble; we were all ready to show the Socs what us Greasers were made of. We just had to wait for Dally and Johnny to show and then we would be ready for the rumble.

“We’re here!” screamed Dally as Johnny and he entered the house.

All of us left the house jumping about even doing somersaults off the front steps, I didn’t try I was never any good at gymnastics. We reached the waste-ground in no time at all where there was another gang fighting on our side, I think. The Socs arrived soon after we did.

“How you feeling Johnny? I’m nervous as hell but if we stick together we should be all right.”

“I’m… worried too. I’m not sure about this Ponyboy we seem to be the smallest here! What if we get hurt…

His face became a yellowish white colour. The sweat was pouring off Johnny at this point. I’d never seen him like this before. Then I noticed that the Soc that had been there the night we had stabbed the Soc got out of his car and pointed and Johnny and me. My blood ran cold. I began to feel a cold sweat pour off. This was a no-weapons rumble but if this Soc wanted revenge for his injured buddy then there was no telling what he’d do.

Someone yelled and suddenly there was a mass of bodies running towards each other with looks of hatred on their faces. There was a sickening sound of heads being punched, kicked and hit off the ground, anything that would do damage to the other person. Then it happened, the Soc who had been staring at us, the one who had been there the night we stabbed the Soc came running over to Johnny with a blade in his hand.

“Nooooo!” I screamed as the Soc made a swipe for Johnny. He had made a large gash in Johnny’s shoulder that was now gushing with blood. He screamed in agony. I jumped on the Socs back and made a grab for the blade but I missed and fell to the ground. I was helpless! He said,

” This is for Bob,” and jabbed the blade into my stomach. I felt excruciating pain in my stomach. Darry came running over with a look of absolute horror on his face. He kicked the Soc so hard in the stomach he fell over and then he began kicking him in the head. Then he came sprinting over to me with tears in his eyes and Sodapop by his side. I heard him say that he knew he shouldn’t have let me come to the rumble. He and Sodapop were crying.

I began to feel cold as if life was seeping out of my body and I looked up at the sky, there was a sunset. It was a golden orange but it seemed exceptionally bright. It was the last one I ever saw. 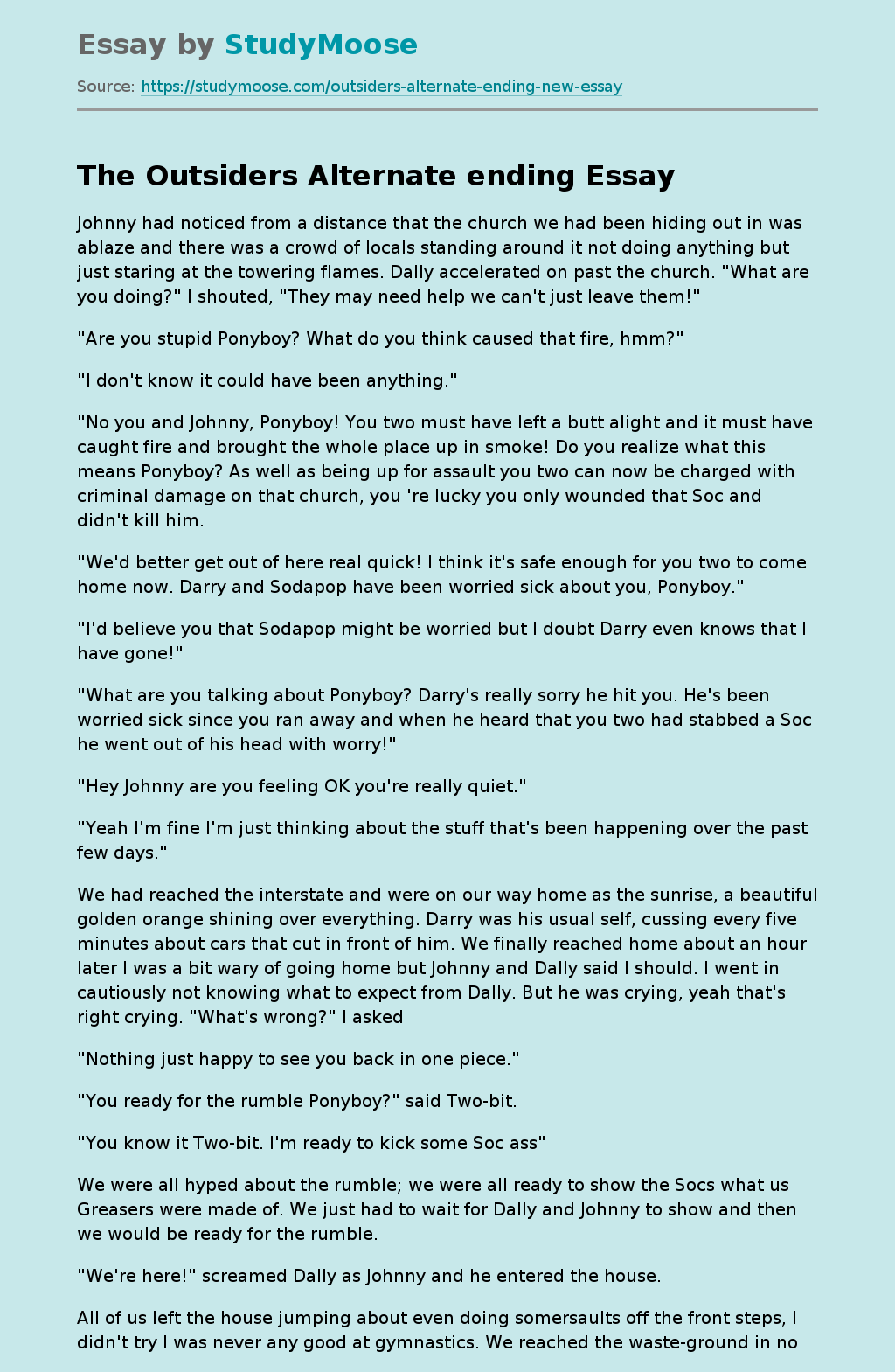