The Snows Of Kilimanjaro: An Alternate Leopard Symbol

Much debate persists over how to interpret the leopard and mountain imagery in Hemingway’s “The Snows Of Kilimanjaro”–and it is often accepted that some specific symbolism must have been intended by the writer—for the epigraph feels contrived. The leopard and the mountain are considered to have direct meaning in Harry’s life—if not also in Hemingway’s life. Richard L.

Elia, for instance, writes in “Three Symbols in Hemingway’s ‘The Snows Of Kilimanjaro’”, that “Hemingway’s use of these two symbols is hardly accidental; both are important archetypes, which symbolize the aspirations and actions of his main character, Harry, a would-be-writer”(Elia 282).

Don't use plagiarized sources. Get your custom essay on
“ The Snows Of Kilimanjaro: An Alternate Leopard Symbol ”
Get custom paper
NEW! smart matching with writer

But the presupposition of this approach to the text, is that Harry is the most relevant character to explore when studying the symbolism of the leopard and mountain.

Certainly, however, Helen, who is intertwined with Harry as his lover—is also a likely candidate to compare parallels with the story’s prominent imagery. It is her world which he has come to inhabit—and hate—after all.

So, while the allure of the writer figure often draws critics to examine Harry and his relationship to the leopard and mountain, once one sees past the gloss of the spectral artist type in Harry, it becomes clear that Helen is just as important as him—especially for putting up with Harry’s cruelty at all.

So, while much interpretation of “Snows” parallels Harry’s failed artistic dreams with his failed ascent of Kilimanjaro, it is simultaneously valid to show how Helen’s love becomes the frozen leopard left out in the elements—as the mountain looms over, symbolizing Harry’s cold heart.

From the outset, Harry has returned to Africa with Helen, because he had happy memories there—long before his writing stopped. But he is not of his former constitution, and finds himself susceptible to gangrene from a thorn scratch. He knows he is dying and even embraces it in the end, claiming to be too tired to care.

He becomes mean to Helen, telling her he does not love her—but this is only due to his mortality encouraging in him some final airs of honesty. So, he takes back his hurtful words, uncomfortable with her pain—but then she forgives him too soon, causing him to rescind his kindness once more, as he cannot stand for their feelings to be false, after so many years of living their love as a lie. So, he mocks her for the ease with which his simple poetry draws her in, but he always reverts to loving her: “She was very good to him.

He had been cruel and unjust in the afternoon. She was a fine woman, marvelous really. And just then it occurred to him that he was going to die”(Hemingway 14). He is a moribund man, hiding behind bitter words—destroying the heart of the only woman who loves him anyway. But because he knows where he is going—he finds it hard not to let the truth out.. Still, due to all of his reversals and redemptions—and despite his history of literary greatness—in the wake of his passing, a sense remains that he is better off gone, and Helen is now somehow better off alone.

She is still capable of believing in love, while he was just struggling to say a few kind words. She is still somewhat excited about adventure and life, while he was too tired to think about any of it. Even before death, Harry felt that “he had had his life and it was over and then he went on living it again with different people and more money, with the best of the same places, and some new ones”(10). He recounts his inglorious slide in life: You kept from thinking and it was all marvelous … you said that you would write …

about the very rich; that you were really not of them but a spy in their country … But he would never do it, because each day of not writing, of comfort, of being that which he despised, dulled his ability and softened his will to work so that, finally, he did no work at all. The people he knew now were all much more comfortable when he did not work (10-11). So it is hard to find sympathy for such a supposed protagonist, and it is not a stretch to suggest that Harry had been headed for death’s summit for a very long time before his end, and Africa had become somewhat of an inevitability for him.

Harry’s words drip with the slow-burn death of someone who cannot be satisfied by anything any longer: ‘It’s a bore,’he said out loud. ‘What is, my dear? ‘ ‘Anything you do too bloody long'(24). He’s tired and headed for the edge—while Helen is still at her peak. She is as much a heroine as Harry is a hero, yet she receives not as much interest from critics, even by those who would reject Harry’s redemption if given the chance. Critics prefer to focus on Harry’s redemption, when interpreting the symbolism of the mountain and leopard. In “Three Symbols in Hemingway’s ‘The Snows Of Kilimanjaro’”, Richard L.

Elia proposes: Like the leopard, Harry tried to reach the ‘Masai,’ to the top; Harry had reached the top, only in his dream … In his sleep, Harry had made an effort to rise, to reach the mountain-top of Kilimanjaro, only to meet with inevitable failure, as his diseased leg feebly ‘hung down alongside the cot (Elia 285). Elia believes Harry is represented by the leopard, while contending Kilimanjaro symbolizes the writer’s insurmountable work in life. Again, the underlying assumption here is that Harry is the most relevant parallel to the leopard..

In her essay “Harry’s Second Chance”, Gloria R. Dussinger writes, “Had ‘The Snows of Kilimanjaro’ ended [before the dream], the reader would remain unimpressed by Harry’s conversion”(Dussinger 58). She goes on to argue that Harry deserves his redemption because of the noble and uplifting character of his final dream. She too, then, is preoccupied with Harry’s journey, ignoring Helen’s equally interesting counter-points within the story. So, if any critic takes issue with Harry being redeemed—then perhaps they might reconsider Helen as the protagonist of the story..

Furthermore, while the trajectory of Harry’s career is disappointing, considering his greater early success—his tale is not automatically an outright failure. Plus, of course, the tale of his shallow love for Helen is sad, but it is not then necessarily totally without sentiment or heart. Indeed, Harry reveals some interesting snapshots from his past prime, via the italicized passages—but in the present he has little to offer. Moreover, in the current action of “Snows”, it is Helen who is the hidden leopard of the plot—just as much as it ever was with Harry.

She is, after all, the fur-wearing huntress that dared to think she could own the summits of him. She is the one still ripe for adventure. She even admits, if he recovers, she will count their safari adventure a favorite time of life for her. It is she who shows courage and determination for him to survive. So the questions as to whether Harry needs to be redeemed—and whether or not he ever is—must at least give way to the equally valid and rewarding reading of Helen as a character worthy of more study.

From this approach then, one can begin to ask whether she is the failed character type as well, and whether she deserves the consequences of Harry’s death or not—but at least then it will be acknowledged that the story is not just about Harry. Harry was once the leopard, long ago, but now he is the mountain, for he will not change for her—and that is why she loves him, and attempts to climb his heights. But ultimately, he will not let her in—leaving her behind in the cold.

He hates to leave things behind, yet by loving her in the end, he subjects her to the pain of his loss—and therefore, he leaves her behind, and pays the ultimate price–ruining his own death, by marring it with the legacy of having left someone behind to suffer. In the beginning, Helen loved him for his writing, but that is what eventually comes to consume him, diverting his attention from even his own festering wound—eventually removing him from her forever. “Snows” is as much about a man who fails to fulfill his art and love in life, as it is about a woman who loses her lover to the past—forced to face a new path.

Harry’s last days are not his best, and he surely endures his share of spiritual struggle—but he does finally find solace in becoming one with Kilimanjaro—while it is Helen who must live on to see another day. It is Helen who, like the leopard, must now submit to the summit of her heart—and go on without her Kilimanjaro.

The Snows Of Kilimanjaro: An Alternate Leopard Symbol. (2016, Dec 20). Retrieved from https://studymoose.com/the-snows-of-kilimanjaro-an-alternate-leopard-symbol-essay 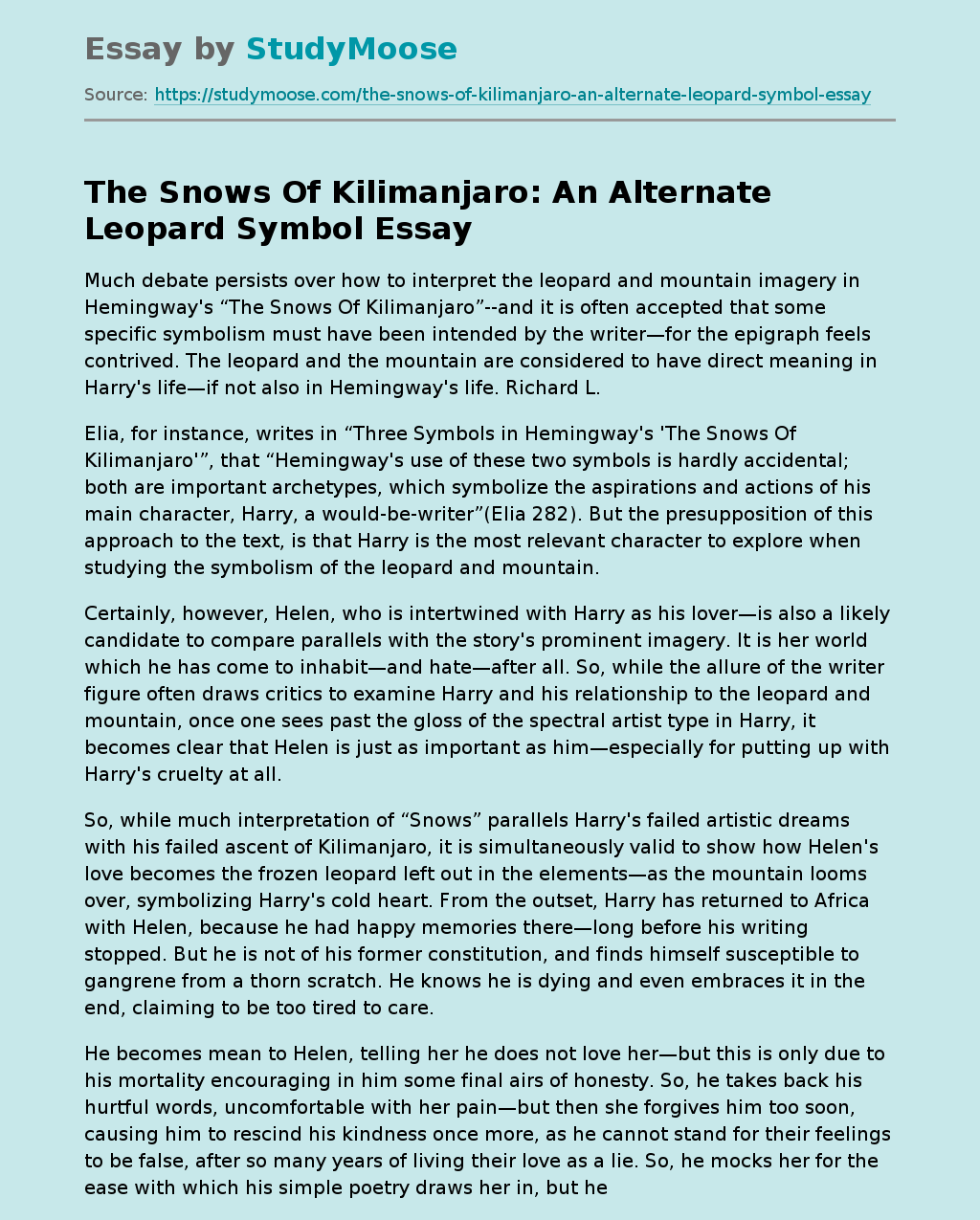