How does Sushi reflect Japanese culture?

Japanese people show great pride in their heritage and they use their food as a form of expression in order to show their cultural heritage. The Japanese focus on the small things in their cuisine that helps make such a large impact in the quality of the food. The country takes pride in their food and uses it for various symbolic reasons. Sushi and pride both have a large correlation in Japanese culture. Their attention to detail is also used as an advantage in order to show people all around the world as to why they are known for their wonderful cuisine.

Turn in your highest-quality paper
Get a qualified writer to help you with
“ How does Sushi reflect Japanese culture? ”
Get high-quality paper
NEW! AI matching with writer

Sushi is pivotal in showing the identity of the Japanese people. Various factors play a role in sushi, such as; the geographical location of the country, the country’s history, its own culture, the aesthetics of the cuisine, and the global economy as a whole.

The geographical location is a large reason as to why the country uses sushi in such a large amount of its fine cuisine.

The country is largely surrounded by water and their main export also happens to be fish. Japan takes advantage of its geographical location by using its surroundings, the ocean, to the fullest. The geographical location of Japan also highly contributes to the countries own economy. Their main exports are agriculture and fish. Their rice fields and the use of the seaside help Japan’s economy tremendously.

The country always manages to have a great harvest for their rice fields which increases the overall value of the rice, thus increasing the economy.

Not only does this mean that the economy increases, but for the rice that they do hold on to, has excellent quality and will be applied to their cuisine. Applying better than average quality rice into their cuisine will also increase tourism to the country. Japan’s quality of food is known throughout the entire world and helps represent the Japanese culture as a whole.

The history of Japanese cuisine also plays a large role in Japanese identity. The countries fish has a high value in the world market and are constantly able to receive fresh fish from their waters. The countries history has always consisted of sushi. Earlier ancestors use to dislike the taste of only the fish and wanted something to add onto the fish, thus adding rice. This is very similar in how other various countries use bread as a way to help combat their meals as well. Throughout the country’s history, sushi began to appear in the west. As more sushi began to appear in other countries, the higher the demand became. As a result of high demand, tourism significantly increased and so did the export of fish. Other countries began to implement fish into their own cuisines and Japanese identity/culture began to spread all over the world. The late 20th century saw sushi gaining in popularity all over the world.

The culture of the Japanese helped introduce sushi into Japan. Their religious affiliations, which were Buddhism, prevented them from eating meant. They saw animals as sacred beings with souls just like them. As a result, they refused to kill animals. The Japanese viewed fish as an alternative method because they were not allowed to harm other animals dude to their religious affiliation. Not only did fish become the staple of Japanese identity, so did rice. Rice has been around since the beginning of Japanese culture and still remains a staple of Japanese identity to this day. The combination of the two most consumed food in Japan led to sushi, which quickly spread to western countries. To this day Japanese identity/culture has a lot to do with the introduction of sushi in its history.

The aesthetics of sushi also plays a large role in Japanese identity. No other countries have been able to create the quality of food as the Japanese do. The quality of the fish and the simplicity of the presentation of the product are like no other. The quality of ingredients plays a large role in their food, as it takes days to weeks in order to properly marinate their fish. The cooks refuse to distribute the food until they believe it is presentable in their eyes. The beauty of the presentation helps bring a unique style to sushi. The various colors, shapes, and texture help bring a unique element. The overall presentation of sushi is just beautiful, something that is hard to mimic. The overall eating experience of Japanese cuisine is a relaxed, almost spiritual experience, something that very few cultures have. Sushi overall is a true art. The presentation, taste, and experience as a whole help bring sushi to life, something that cannot be replicated.

How does Sushi reflect Japanese culture?. (2016, Mar 13). Retrieved from https://studymoose.com/how-does-sushi-reflect-japanese-culture-essay 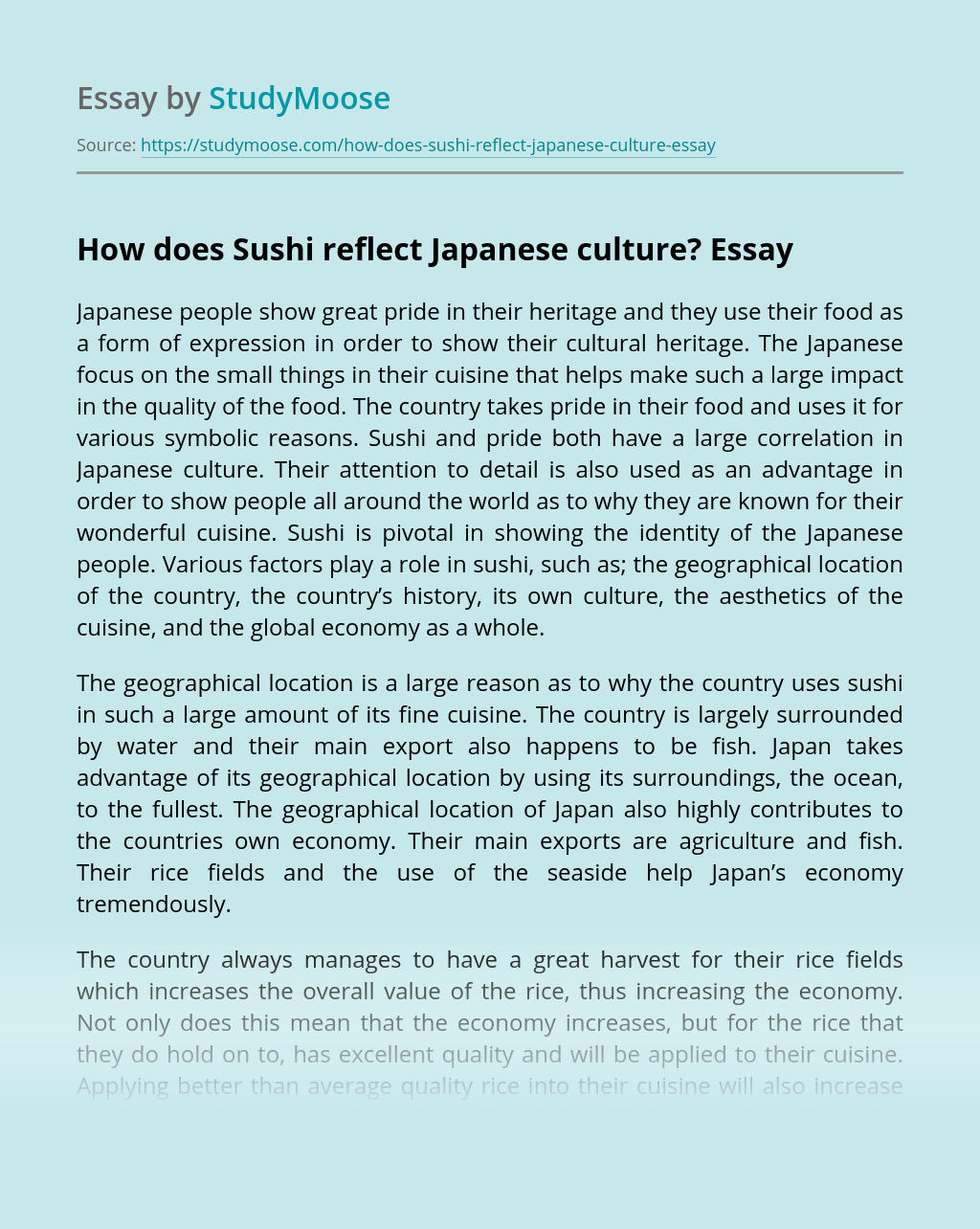 Turn in your highest-quality paper
Get a qualified writer to help you with
“ How does Sushi reflect Japanese culture? ”
Get high-quality paper
Helping students since 2015
Stay Safe, Stay Original