When most people hear the word, “Sushi”, they immediately think of raw fish. In truth, dishes made with raw fish are called “Sashimi”. What defines Sushi is any dish made with vinegar rice, which may or may not include raw fish. Although in today’s society you will find Sushi served most often in a Japanese restaurant, it actually dates back to 7th Century China. It was the way of preserving fish! As the Chinese people didn’t have modern day refrigerators, they used the natural process of fermentation.

Don't use plagiarized sources. Get your custom essay on
“ Sushi Rice ”
Get custom paper
NEW! smart matching with writer

To complete the Sushi-making process, only rice and salt were needed. The result was delicious fish, causing Sushi to grow in popularity.

In the 1800s, Sushi was made in narezushi process, which lasted for months. When it came time to eat the rice was thrown out and only the fish eaten. As time passed Sushi became a really popular food choice in both China and Japan. So it eas possible to buy sushi as a snack during intermission at the various theaters, like a popcorn nowadays.

Later people began experimenting and discovered that by making the rice with a little vinegar the same sour taste was produced and better yet, the fermentation time was dramatically reduced to one or two days. So rice can be eaten together with fish.

The popularity of Sushi is greater now than ever. People are much more health conscious and enjoy the fact that Sushi is low fat, loaded with nutrients, and easy and quick to make.

Since sushi is often served raw, no cooking fat is introduced during its preparation. A typical serving of Sushi consists of 8 to 10 pieces, which is around 350 to 400 calories. Because of the fish, Sushi is high in protein and an excellent source for Omega 3 fatty acid. From the seaweed used in Sushi along with the rice, this food is also rich in iodine and complex carbohydrates. Morover, true wasabi has anti-microbial properties and may reduce the risk of food poisoning.

The common ingredient across all kinds of sushi is sushi rice. Variety arises from fillings, toppings, condiments and preparation. Traditional versus contemporary methods of assembly may create very different results from very similar ingredients. Chirashizushi (“scattered sushi”) is a bowl of sushi rice topped with a variety of sashimi and garnishes (also refers to barazushi). Ingredients can be uncooked and arranged artfully on top of the sushi rice in a bowl, this is called Edomae chirashizushi, or cooked and ingredients mixed in the body of rice in a bowl, this is called Gomokuzushi. [pic][pic]

A version of inarizushi is a Hawaiian speciality, it includes green beans, carrots, and gobo along with rice, wrapped in a triangular aburage (fried tofu) piece. Makizushi (“rolled sushi”), Norimaki ( “Nori roll”) or Makimono (“variety of rolls”) is a cylindrical piece, formed with the help of a bamboo mat, called a makisu. Makizushi is generally wrapped in nori (seaweed), but is occasionally wrapped in a thin soy paper, cucumber, or parsley. Makizushi is usually cut into six or eight pieces, which constitutes a single roll order.

Narezushi, comparing it to other types, has a long time of preparation – six months. fish is pressed in between layers of salt and left for months to ferment So this is a traditional type of fermented sushi. it has a unique taste not usually appreciated by Westerners. Oshizushi is a pressed sushi. Block-shaped pieces are formed with the help of wooden mold. The increasing popularity of sushi around the world has resulted in variations in western countries. As the ingredients they use cucumber, avocado, cream cheese, carrots, spicy tuna, beef or chicken etc.. Gari (sweet, pickled ginger) is eaten with sushi to both cleanse the palate and aid in digestion. In Japan, green tea (ocha) is invariably served together with sushi.

Soy sauce is the usual condiment, and sushi is normally served with a small sauce dish. Traditional etiquette suggests that the sushi is turned over so that only the topping is dipped; this is because the soy sauce is for flavoring the topping, not the rice, and because the rice would absorb too much soy sauce and would fall apart. Toppings which have their own sauce (such as eel) should not be eaten with soy sauce. Traditionally, the sushi chef will add an appropriate amount of wasabi to the sushi while preparing it, and etiquette suggests eating the sushi as is, since the chef is supposed to know the proper amount of wasabi to use.

However, today wasabi is more a matter of personal taste, and even restaurants in Japan may serve wasabi on the side for customers to use at their discretion, even when there is wasabi already in the roll. The wasabi should not be mixed with the soy sauce, as this dulls the flavor of the wasabi. Traditional nigirizushi is made so that the entire piece can be consumed in one bite, and etiquette considers this the correct way to eat it. Outside of Japan, it is unusual to eat nigirizushi directly with hands. Typically chopsticks are used for sashimi, nigirizushi, makizushi and hands are only used for temaki. 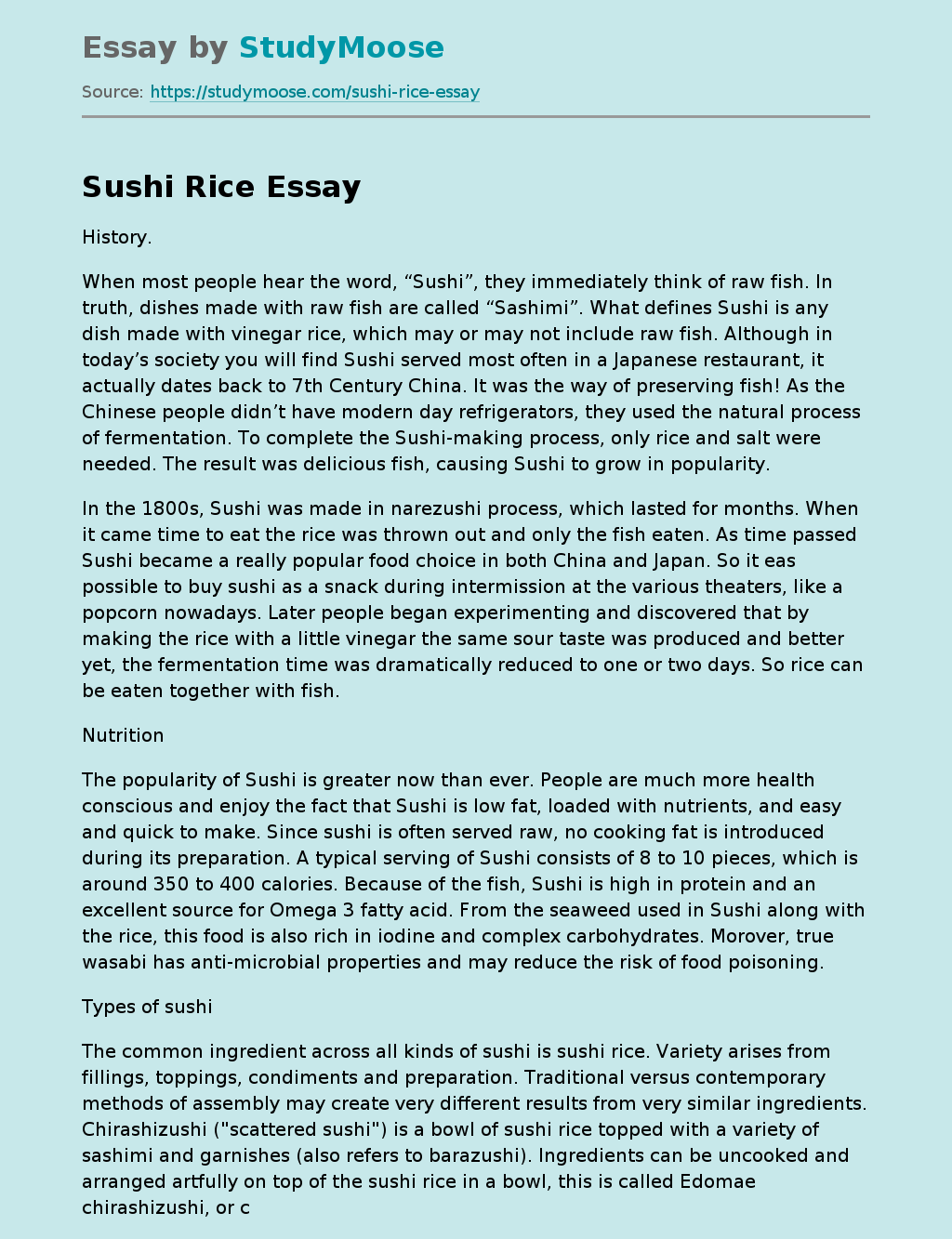