Many species have become extinct. Just as alarming is the ever increasing number of species that are not only becoming endangered but critically endangered. The course which this research paper has been written for is extensive. It is not possible to cover everything in one research paper. With this in mind, this paper will be restricted to the morphology, distribution, population, habitat and ecology, and behaviour of the snow leopard (Panthera uncia).

The snow leopard typical weight ranges from 27 and 54 kilograms. The body length of the panthera species in question can measure anything from 74 – 130 centimetres; however, this measurement does not include the animal’s tail. The tail can actually be just as long as the body length. The long thick fur varies in colour between smoky grey to a yellowish tan with a white belly. In addition, the snow leopard typically has grey to black open patterns reminiscent of rosettes on their body.

The snow leopards, well adapted for mountain life, have chest and short forelimbs with large paws capable of handling the terrain the species is found dwelling in. The aforementioned paws have a fur underside. This underside of fur increases traction on steep surfaces.

The animal’s hind legs are long. The longer hind legs, coupled with having a long flexible, increase are perfect for leaping and sustained balance on unstable surfaces.

The conditions in the habitat where snow leopards are typically found are less than ideal; however, the animal is equally well protected from climatic conditions by having a stocky body with small, rounded ears and an enlarged nasal cavity. As previously mentioned, the animal has long body fur. This body fur, with woolly undergrowth, is combined with a thick furry tail that can be wrapped around the face. This essentially aids in minimising heat loss.

Despite possessing an incomplete ossification of the hyoid bone, the snow leopard is surprisingly unable to roar. Possessing an incomplete ossification of the hyoid bone was previously believed to be essential in allowing cats to roar; however, there is a logical explanation for the snow leopard’s lack of roar. It has been mentioned several times in class that it is easier for a species to lose a train rather than acquire one. Just as some birds are now incapable of flying, snow leopards are incapable of roaring.

Snow leopards are, most of the times, regarded as opportunistic predators, since they exploit a wide range of prey species (Anwar et al., 2011). Ungulates that most of the times represent the main snow leopard’s diet constituents include sheep, urial, goats, blue sheep and markhor. Other snow leopards’ prey items include birds, rodents as well as small and medium mammals like marmots, hares and musk deer (Shehzad et al., 2012). In Mongolia, argali and Siberian ibex are some of the snow leopards’ natural prey. Snow leopards require an annual prey of between 20 and 30 adult blue sheep. Since they live in areas with strenuous conditions, they do not experience a lot of competition from other predators. However, snow leopards have been experiencing an indirect competition from livestock. Snow leopards preys have been competing for forage with livestock thus decreasing the prey base. This has subsequently made the snow leopards to start killing livestock for food.

Snow leopards have a gestation period of between 90 and 100 days after which they give birth to between 1 and 5 cubs. At birth, a snow leopard cub weighs approximately 500g which increases to approximately 2kg after 2 years. The cubs are usually born blind but open their eyes after between 5 and 15 years. In addition, they lactate for about 5 months and begin to eat meat after between 6 and 8 weeks.

At the age of between 1 and 2 years, the survivorship of snow leopards is high since they can only die due to diseases such as osteochondritis dissecans (Herrin et al., 2012) and tuberculosis (Helman et al., 1998). The survivorship then begins to decline rapidly due to conflicts with human beings and poaching. Due to the depleting prey base, snow leopards have resorted to killing of livestock and the shepherds retaliate by killing them. In addition, people capture them for pets while others kill them for fur, bones and pelt. 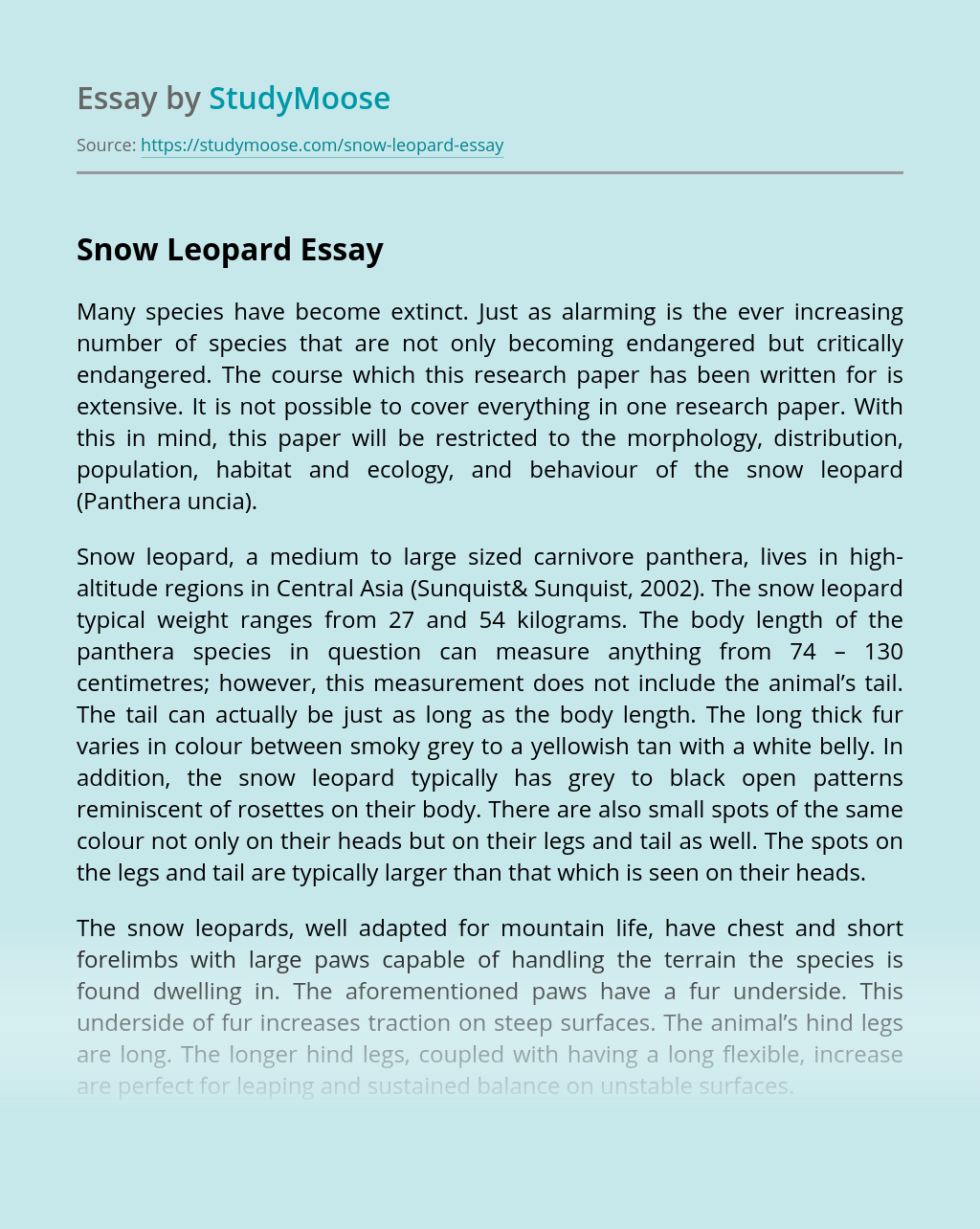